The fortified village of Bergheim suddenly appears around a bend along the Alsace Wine Route. Located amidst a beautiful landscape of undulating vine covered hills, Bergheim is famous for being one of the few towns in Alsace to have kept its fortified walls, which date back to 1311, intact.

The well-preserved centre of the village features some fine monuments and half-timbered houses. At the western entrance of the village, the imposing and turreted Obertor (Porte Haute), which dates back to the 14th century, is Bergheim’s only remaining gate. With its winding streets lined with wine-growers houses and wrought-iron signs, Bergheim has become an inevitable stop along the Alsace Wine Route. 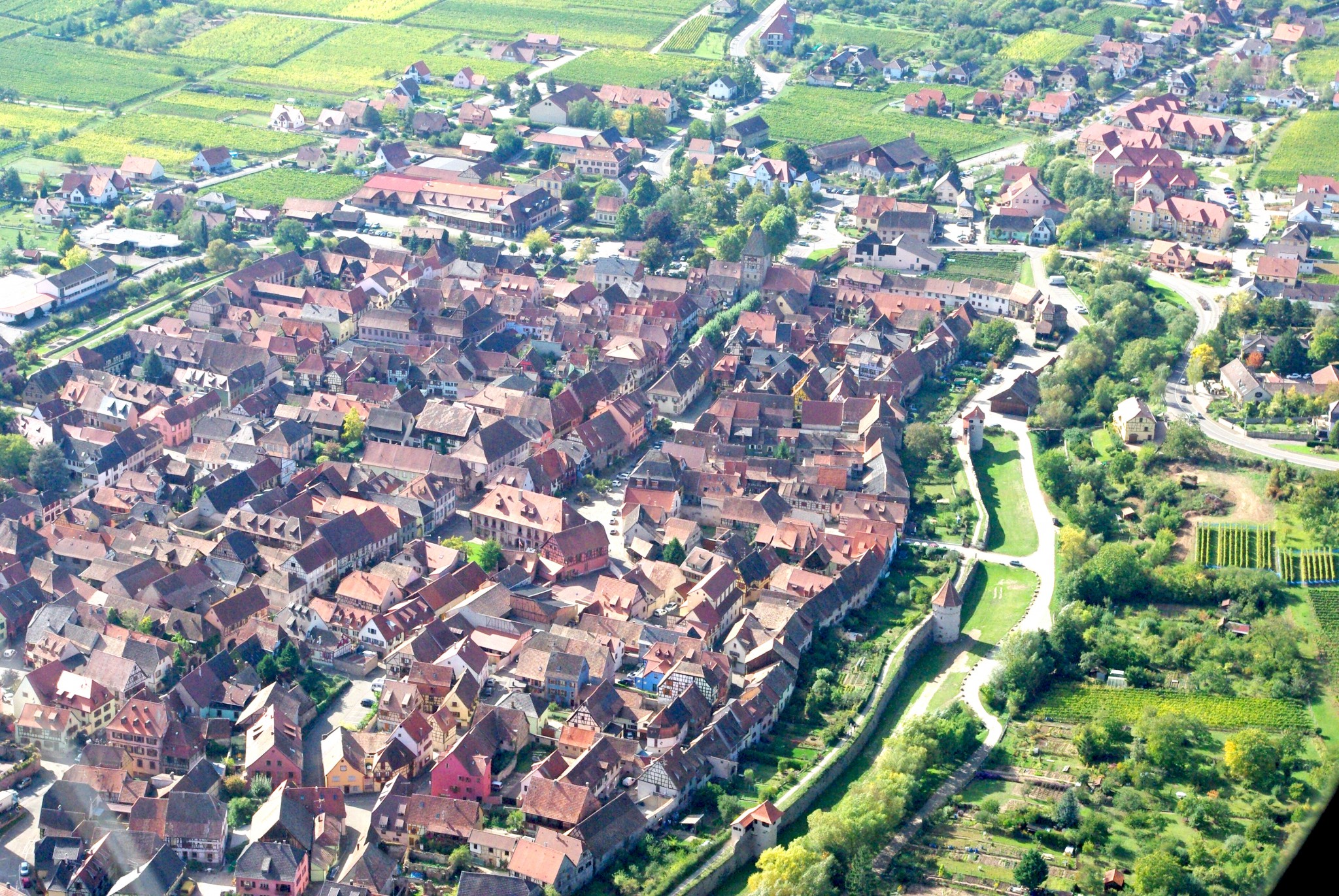 The village of Bergheim from above © French Moments

As with many other Alsatian towns, Bergheim sprang up along a Roman trade route between Strasbourg and Lyon, the site having originally been inhabited during the Pax Romana.

Winegrowing in Bergheim is a long established industry, dating back before the 10th century.

Bergheim in the Middle Ages

In the 12th century, Bergheim belonged to the counts of Eguisheim-Dabo. In 1225, Bergheim came under the tutelage of the Dukes of Lorraine before falling into the hands of the Ribeaupierre dynasty in 1287. The same year, Hartmann de Baldeckduring completely destroyed the village of Bergheim during the succession war of the Ribeaupierre.

Half-timbered house in the village of Bergheim © French Moments

In 1293, the army of King Adolf of Germany, count of Nassau raged war against the Habsburgs, destroying the village and besieging the neighbouring Ortenbourg Castle.

In 1310, after the reconstruction of the village, Henri II of Ribeaupierre decided to fortify Bergheim. Two years later the coveted title of “City” was bestowed on the village by Henri VII of Luxembourg. The King also conferred upon Bergheim the right to grant asylum.

In 1313, the Ribeaupierres sold Bergheim to the Habsburgs along with the neighbouring villages of Rodern and Rorschwihr. 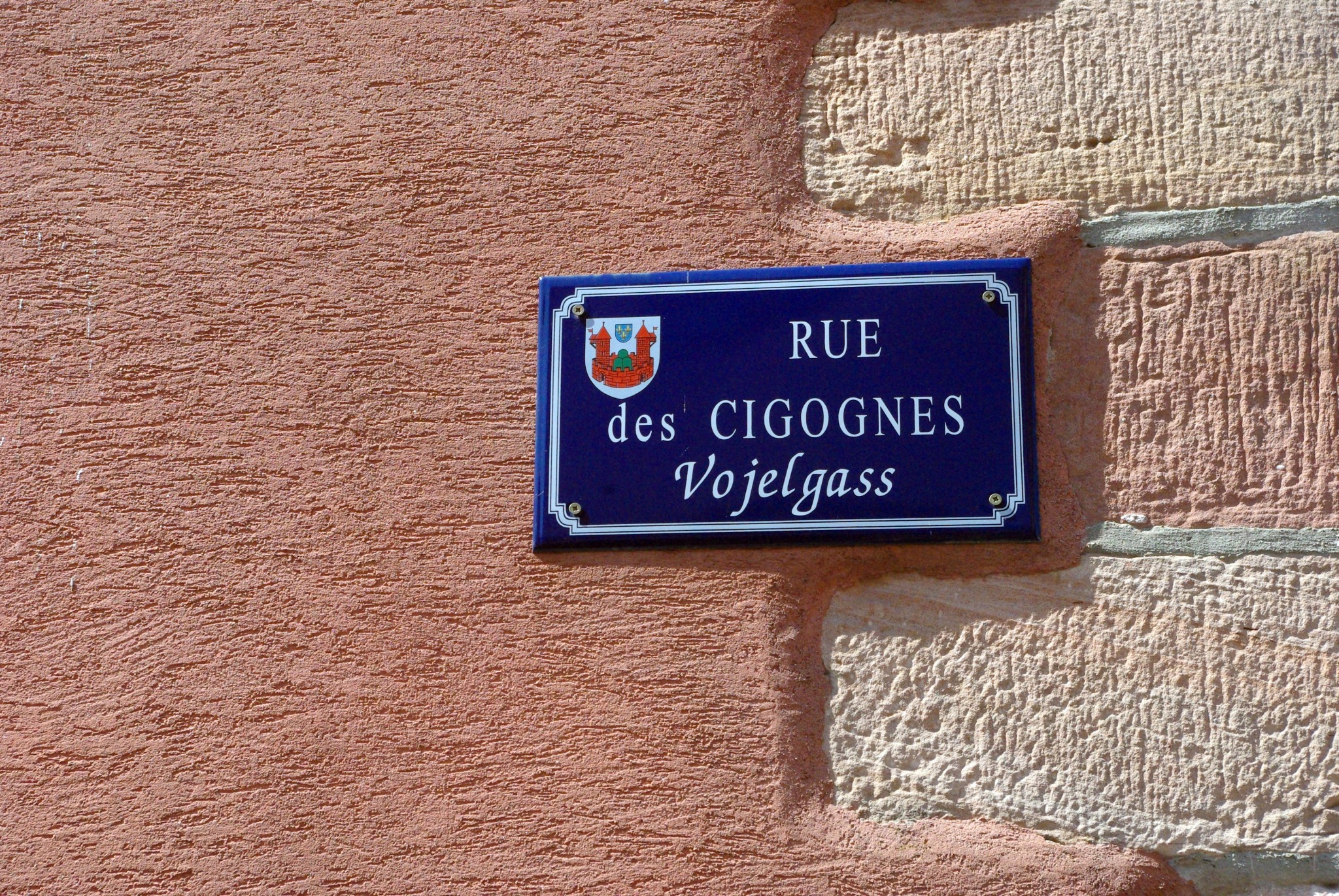 Thereafter Bergheim became a little fortified Austrian town next to the village of Saint-Hippolyte, the outpost of the Duke of Lorraine.

Bergheim did not however stay under Austria’s wing for long. A year later, the Habsburgs mortgaged Bergheim’s future to Henri of Mullenheim, a banker from Strasbourg.

In fact the inhabitants of Bergheim bought back their independence themselves only to again come under the authority of the Habsburgs. The Austrian dynasty did not stop there. Each time they were in need of funds, Bergheim was mortgaged to:

Each time, the people of Bergheim paid to recover their freedom.

For this reason, in 1375, Archduke Leopold II granted the little town the right to mint coins. He also confirmed its right to grant asylum. In the 16th and 17th centuries, the village of Bergheim received 752 applications for asylum. They included 728 for murder and serious injury and 24 for debts. The village granted 744 of them.

In 1534, a villager from Rodern was pursued for a crime and found refuge in Bergheim. Grateful, he installed on the Porte Haute the ‘Lack’Mi‘ (see photo). It is an allegorical bas-relief sculpture depicting a man making fun of the people who tried to arrest him (by sticking out his tongue while showing his bare bottom!)

The Lack’Mi of Bergheim © French Moments

In 1648, the town of Bergheim became French by virtue of the Treaty of Westphalia.

The fortifications of Bergheim 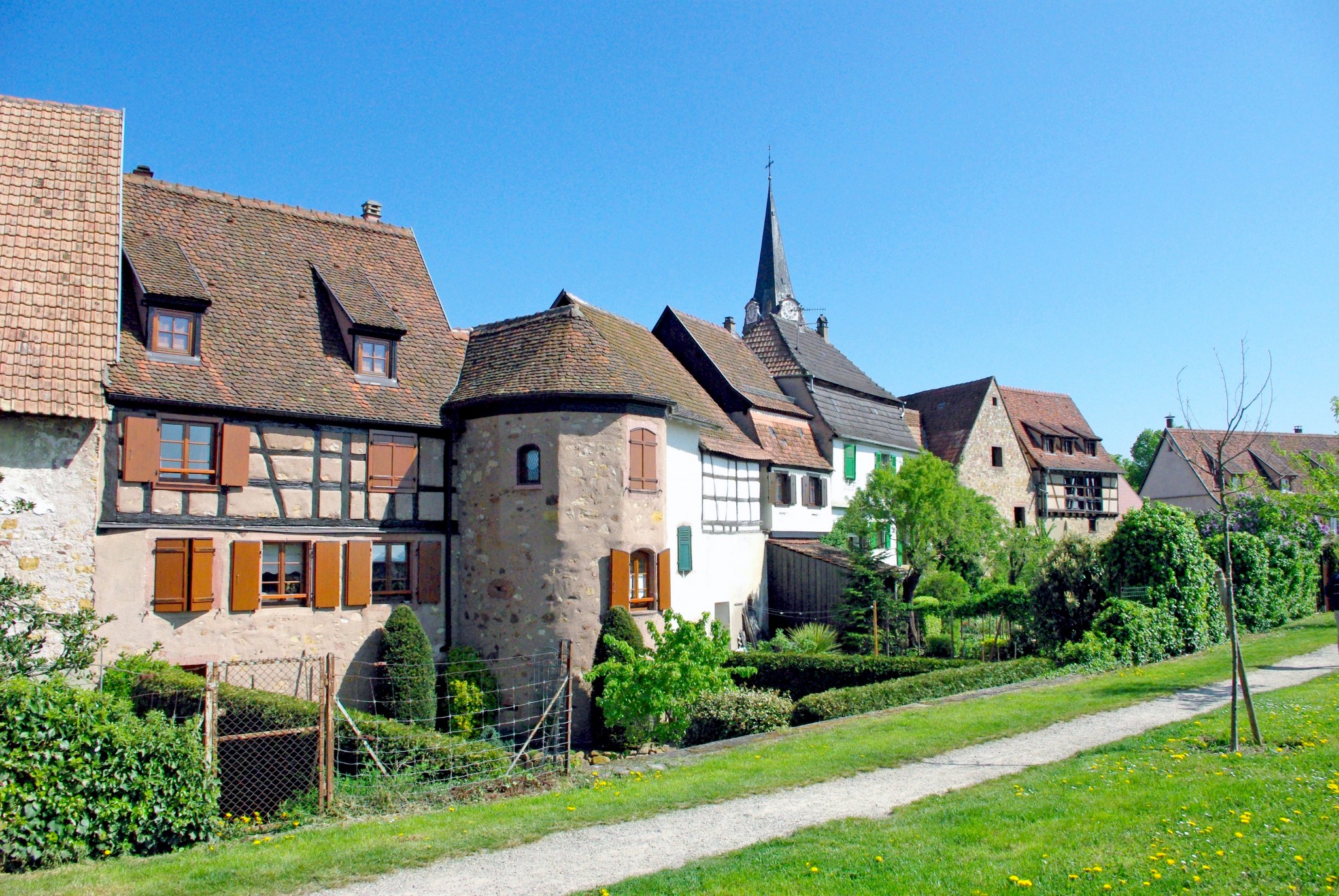 As one of the best examples of a fortified town in Alsace, two kilometres of ramparts surround the village of Bergheim. The fortifications are set out in a rectangular shape 600 m long and 300 m width and spread over 18 hectares.

For obvious reasons, the northern front was provided with the best protection because people expected the enemy to come from this side.

Unlike other fortified towns in Alsace, Bergheim did not have a castle within or against its walls. 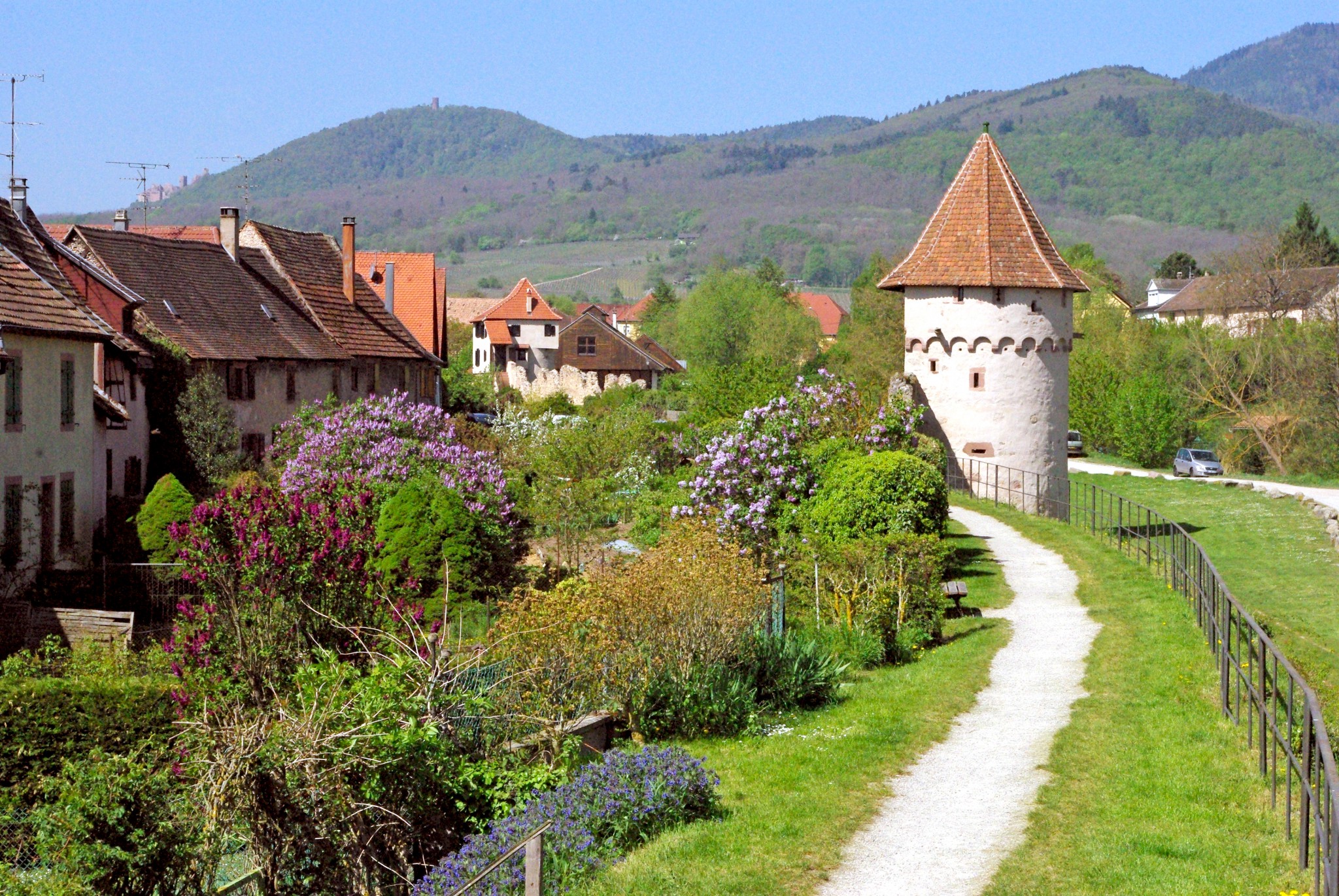 Only the Obertor (Porte Haute) still stands today. This gate dates back to 1310 and stands 22 metres high. The entrance was modified several times during the Middle-Ages. The roof is covered with glazed tiles similar to the motives found in Burgundy. 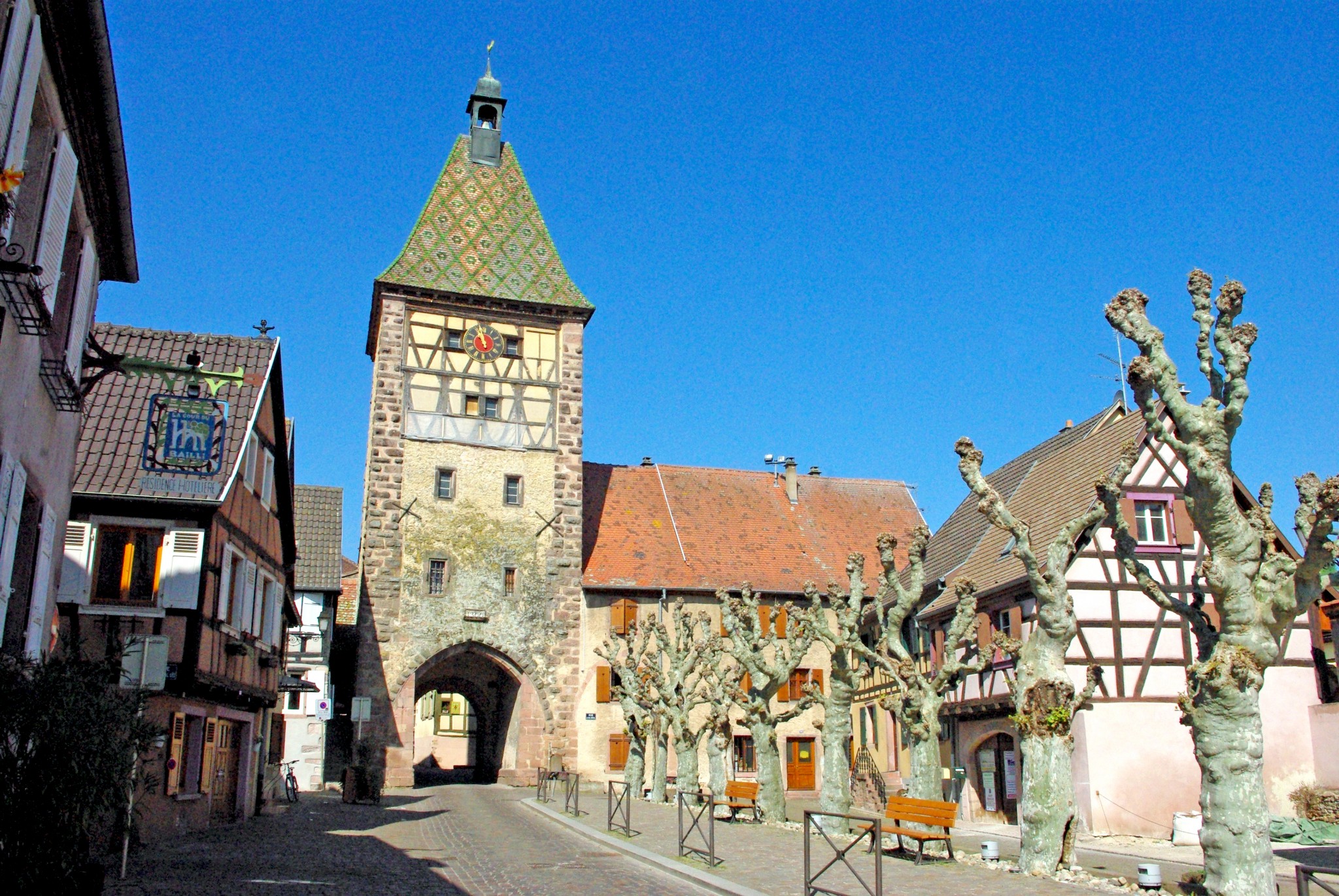 The Obertor (or Porte Haute) in Bergheim © French Moments

The external façade is entirely rendered while the interior features half-timbering which makes it less austere. This is similar to the Dolder Gate in Riquewihr.

At one time, the gate was preceded by a barbican drawbridge.

A walk along the ramparts offers fine views over the hills, the well-kept double-fortifications, the Haut-Kœnigsbourg castle and the vineyards. 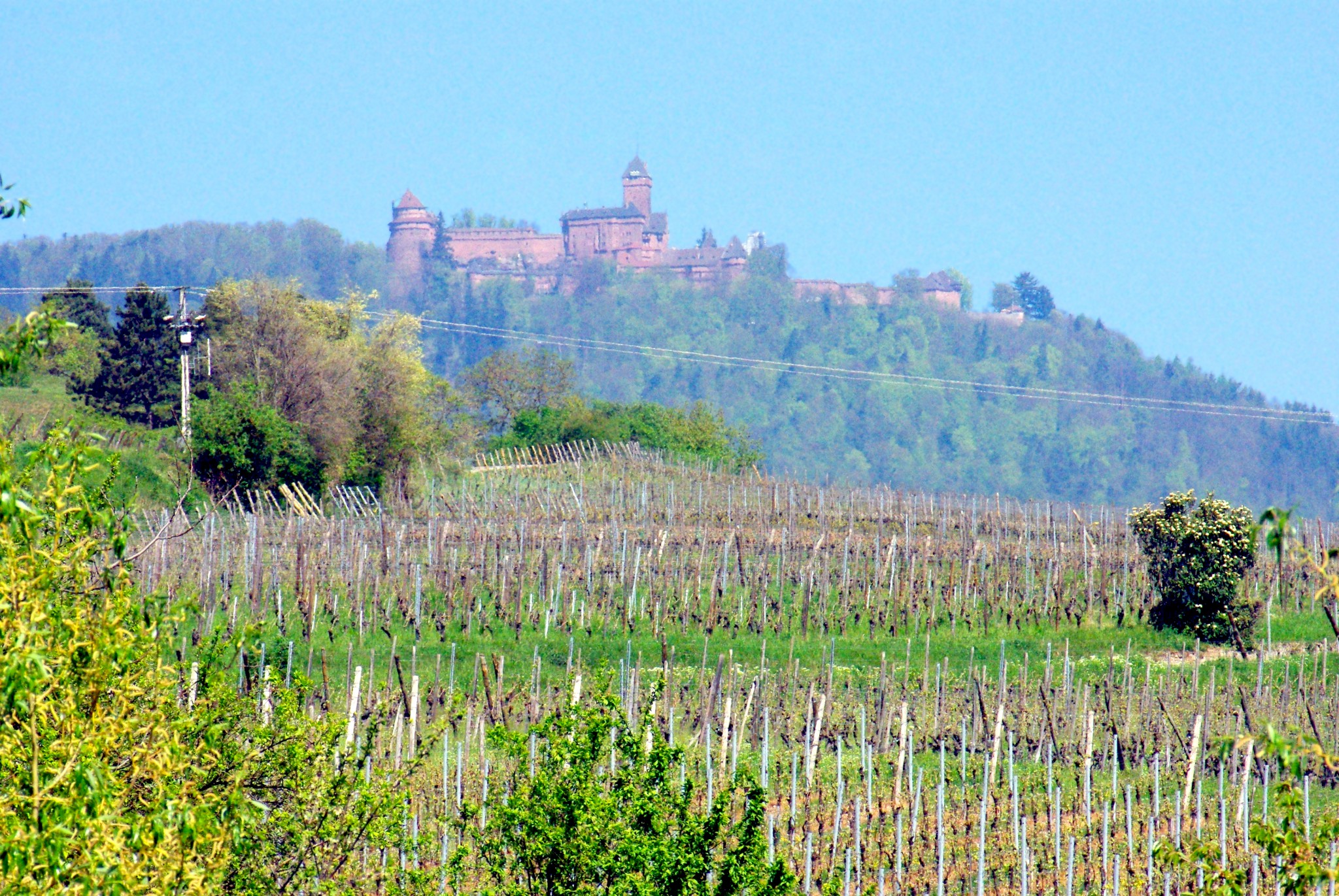 Visit of the village of Bergheim

From the car park next to the Obertor (Porte Haute), enter the historic part of town by walking under the gate.

Stroll down the Grand Rue which is lined with beautiful half-timbered houses and the old wash-house of the village. There, you can admire winegrowers’ houses with their carved timber and stone oriels, some of them highlighted by elegant wrought iron signs.

Under the Obertor (Porte Haute) in Bergheim © French Moments

Place du Marché is Bergheim’s largest square, lined by the Town-Hall and some charming half-timbered houses. On the square stands a fountain made of sandstone and wrought-ironwork, on which is featured the coat of arms of Bergheim.

The parish Catholic Church was built with red sandstone from the Vosges in the 14th century following a fire which burnt down the previous sanctuary. It underwent several modifications over time, particularly to the bell tower in the 18th century. 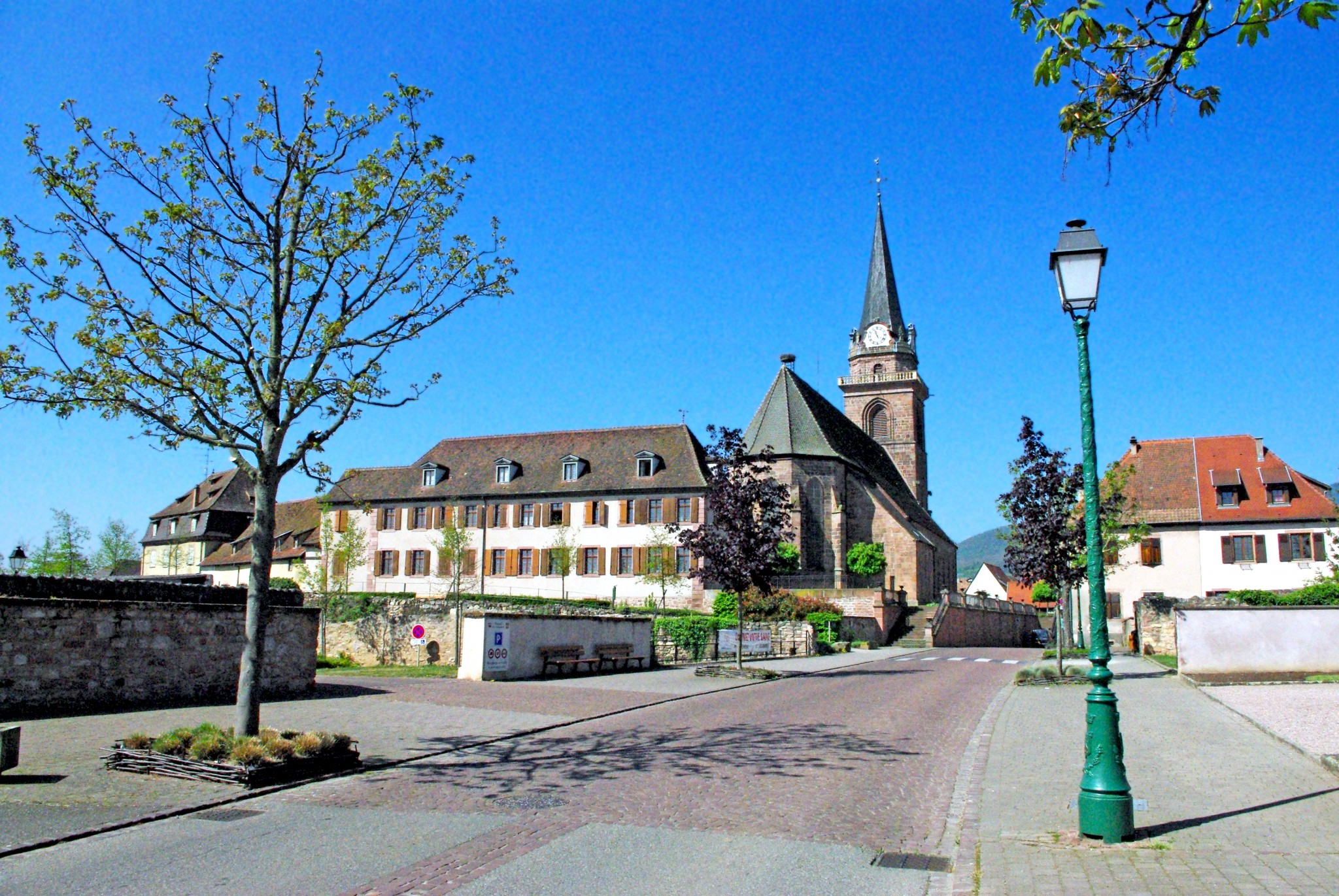 You can walk in a few narrow streets to get a better idea of this typical flower-decked Alsatian village: rue de la Cigogne, rue des Chevaliers, and rue des Juifs where the presence of a synagogue dating back to 1862 reminds us that Bergheim used to house one of the largest Jewish communities in Alsace until the 20th century.

If you visit Bergheim in Spring, Summer or Autumn you’ll find it beautifully decorated with flowers, from geranium on the window to bed-flowers.

Finally, a visit to Bergheim would not be complete without mentioning the Witches’ House (Maison des Sorcières). This little museum located at 5 rue de l’église records the lives of the women who were tortured, judged and burnt at the stake in Bergheim for alleged acts of witchery.

Find out more about Bergheim on the website of the Ribeauvillé-Riquewihr Tourist Office.
Liked it? Take a second to support French Moments on Patreon!