New posts
You are at:Home»Seasons of France»Autumn»World War I Armistice Day in France

Background of the World War I Armistice Day In November 1918, Germany was considered defeated. Although France was victorious, WWI was in a way a defeat for the country. Statistics show the vast extent of the tragedy:

World War I Armistice Day or the Armistice of Compiègne

On 11 November 1918, the Entente Powers (France and Britain) signed an agreement with Germany. Although the Allied generally use the term ‘Victory’ and “defeat” for Germany, it is important to note that Germany did not surrender.

The warring parties agreed to a ceasefire to come into effect at 11 am on 11 November 1918: 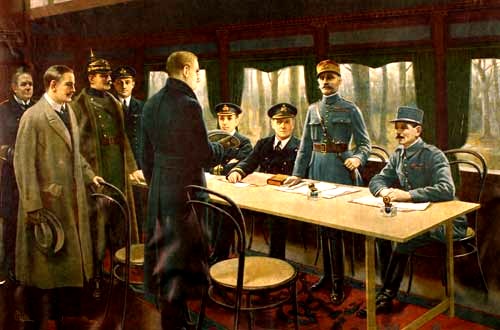 The signature of Armistice in Rethondes.

This painting by an unknown author shows from left to right:

The Treaty of Versailles signed in the palace

Until the signing of the Treaty of Versailles on the 28th of June 1919, the two sides were still in a formal state of war. The Treaty of Versailles, signed in the prestigious Hall of Mirrors of the palace, officially terminated the war. It requested that Germany gave back Alsace and the département of Moselle to France. 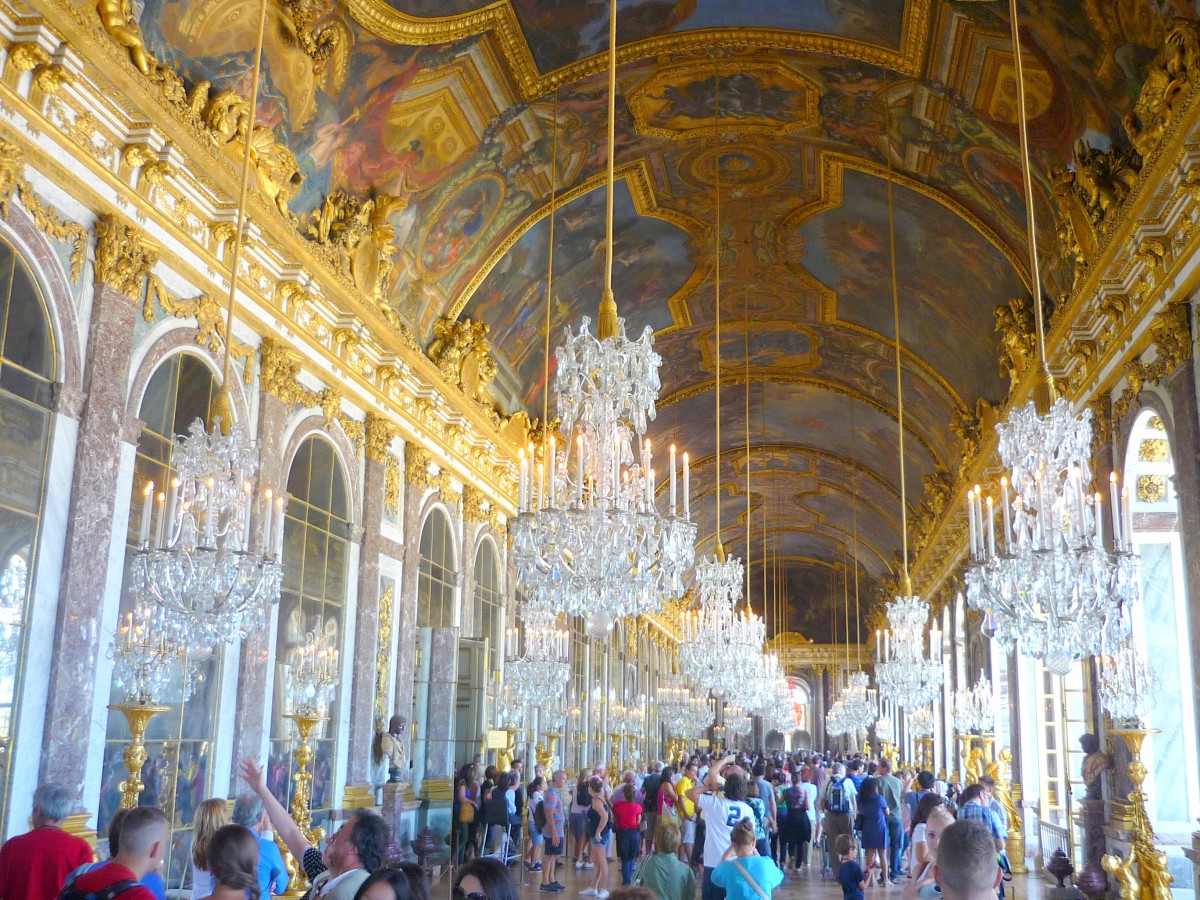 The Hall of Mirrors at Versailles © French Moments

It was torn up by Adolf Hitler when he became dictator of Germany in the 1930s for the conditions of the Treaty were deliberately set out to humiliate Germany.

The Armistice Clearing of Rethondes

The green and sandy clearing is the historic site of the signature of the WWI Armistice which took place on the 11th of November 1918.

During WWI, the clearing was used as a rail siding for rail-mounted artillery. For the Armistice meeting, Foch’s private train was secretly assembled by the French at Rethondes. The warring parties met on a special railcar that once belonged to Napoleon III.

The visit of Hitler in Rethondes

Following the Battle of France (10 May-22 June 1940), Hitler had the French sign their capitulation inside the same railcar and on the same spot on the 22nd of June 1940. 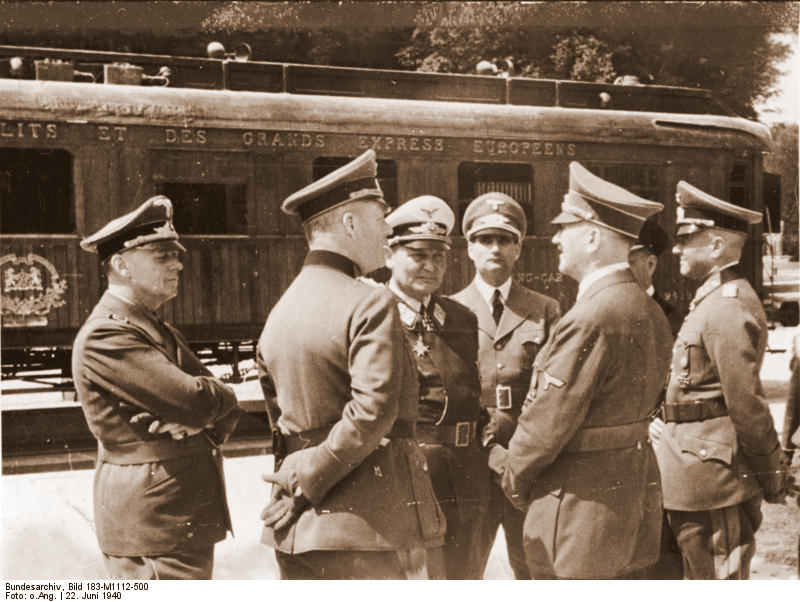 Later, the car was taken to Berlin before being destroyed by fire by SS troops in Crawinkel, Thuringia in April 1945 by order from Hitler.

A faithful replica was replaced at the clearing in 1950 and can be visited at the Armistice museum. Recently remains of the original car were discovered and were returned to the glade where they have been displayed since 1995. 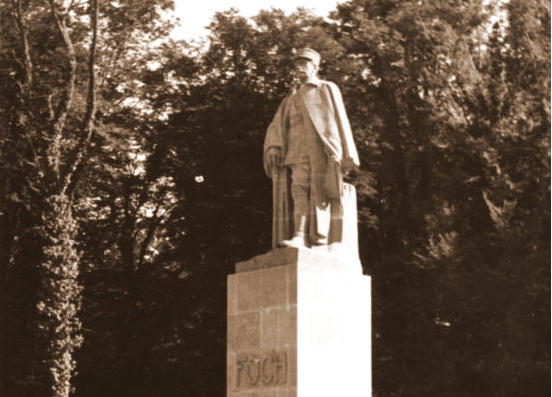 The memorial site also includes a statue of Marshal Ferdinand Foch and the monumental Alsace-Lorraine Memorial representing an Allied sword pinning down an Imperial German eagle.

A memorial slab marks the exact location of the original railcar that was used for the Armistice meeting. A commemorative plaque reads in French:

“Here on the eleventh of November 1918 succumbed the criminal pride of the German Reich… vanquished by the free peoples which it tried to enslave.”

World War I Armistice Day and the Forest of Compiègne

The Armistice Clearing is located in the vast and ancient forest of Compiègne which extends over 14,414 hectares between Compiègne and Pierrefonds, some 60 km north of Paris. Entirely located in the Picardy region, it is made up of oaks, beech and hornbeams. With a succession of hills, streams and valleys, Compiègne forest offers kilometres of tracks for ramblers and cyclists.

The grand royal Palace of Compiègne and its extensive gardens are located at the western edge of the forest.

War Memorials commemorating the events and the casualties of WWI were erected in thousands of villages and towns throughout France. It is estimated that 36,000 memorials were set up in France between 1920 and 1925. The memorials are often found at the centre of an important town square with the inscriptions: “à nos morts” (to our dead).

In many cases, these monuments also bear the names of soldiers killed during WW2. On the morning of the 11th of November, the mayors, local authorities and occasionally military dignitaries pay tribute to those fallen during the two World Wars at the memorials. They assemble to place a wreath of blue-white-red flowers on the town’s memorial.

On that day in Paris, the President of the French Republic attends a ceremony at the Arc de Triomphe. Under the arch, he would traditionally lay a wreath on the Tomb of the Unknown Soldier (Soldat Inconnu) at 11 am, before the observance of two consecutive minutes of silence. The first minute is dedicated to the soldiers and civilians who died during the conflict and the second to these left behind: widows, orphans, wounded…

The eternal Flame of Remembrance placed on the grave echoes that of the Vestal Virgins in Rome which was extinguished in 394 by Barbarian raids. It remembers the soldiers killed in the war who were never identified. Since 1923, the flame has been rekindled every evening at 6.30 pm by associations of war veterans.

The inscription on the grave reads:

The symbolic of the blue cornflower (Bleuet de France) 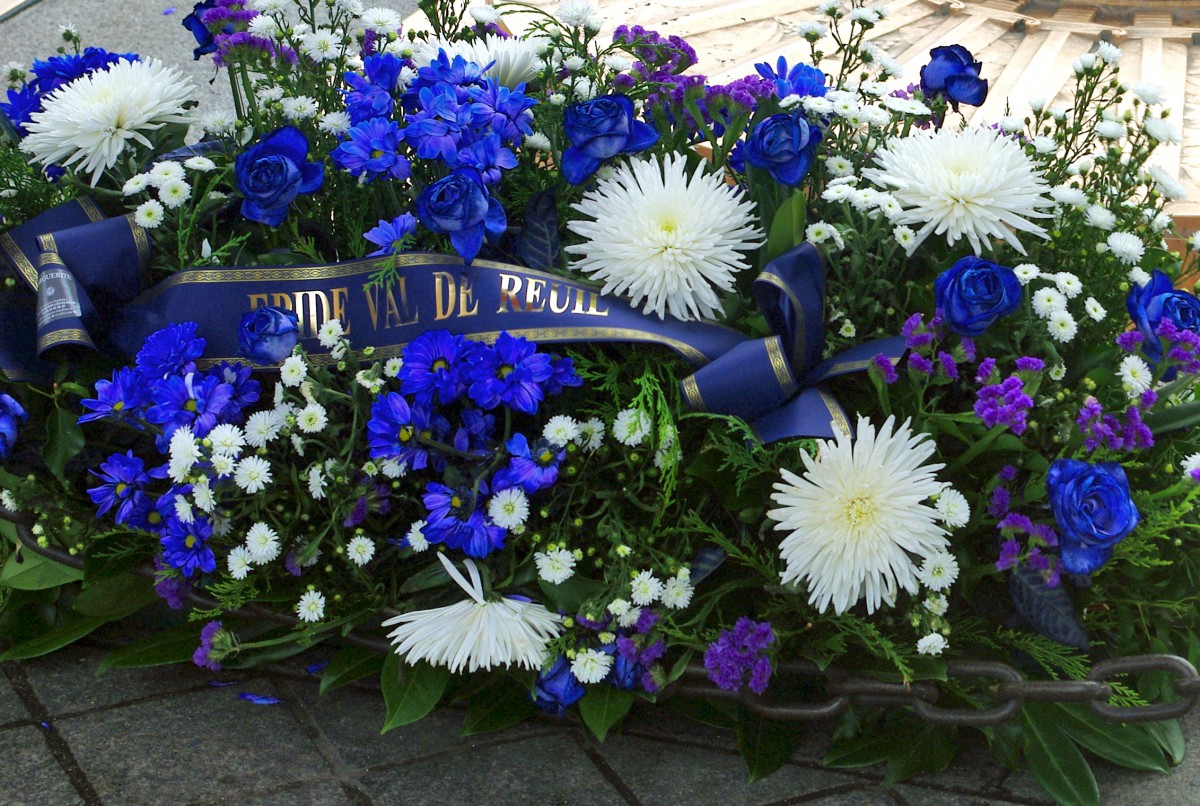 Similar to red poppies, blue cornflowers continued to grow in the devastated lands of the Western Front and were often the only touch of colour visible amidst the mud of the trenches.

The Bleuet also referred to the Poilus (French WWI veterans) of Class 15 who was born in 1895 and fought in the battlefields of Chemin des Dames. The nickname come from the deep blue colour of their brand new uniforms.