The west facade of Notre-Dame cathedral is a remarkable Gothic masterpiece of simplicity and harmony. Architect Le Corbusier described the Notre-Dame’s facade as a ‘pure creation of the spirit’. More than 13 million visitors come each year to the forecourt to admire the famous honey-toned facade with its stone architecture and sculpture.

This article was written before the great 2019 fire of the cathedral. We hope it will serve as a beautiful testimony of the lost splendour of Notre-Dame… As I’m updating these lines, we can only wish the historic sanctuary will be restored in the state it was before the fire, and yes with the restoration of Viollet-le-Duc’s iconic spire!

Get the ebook: Notre-Dame de Paris – A Photographic Journey! 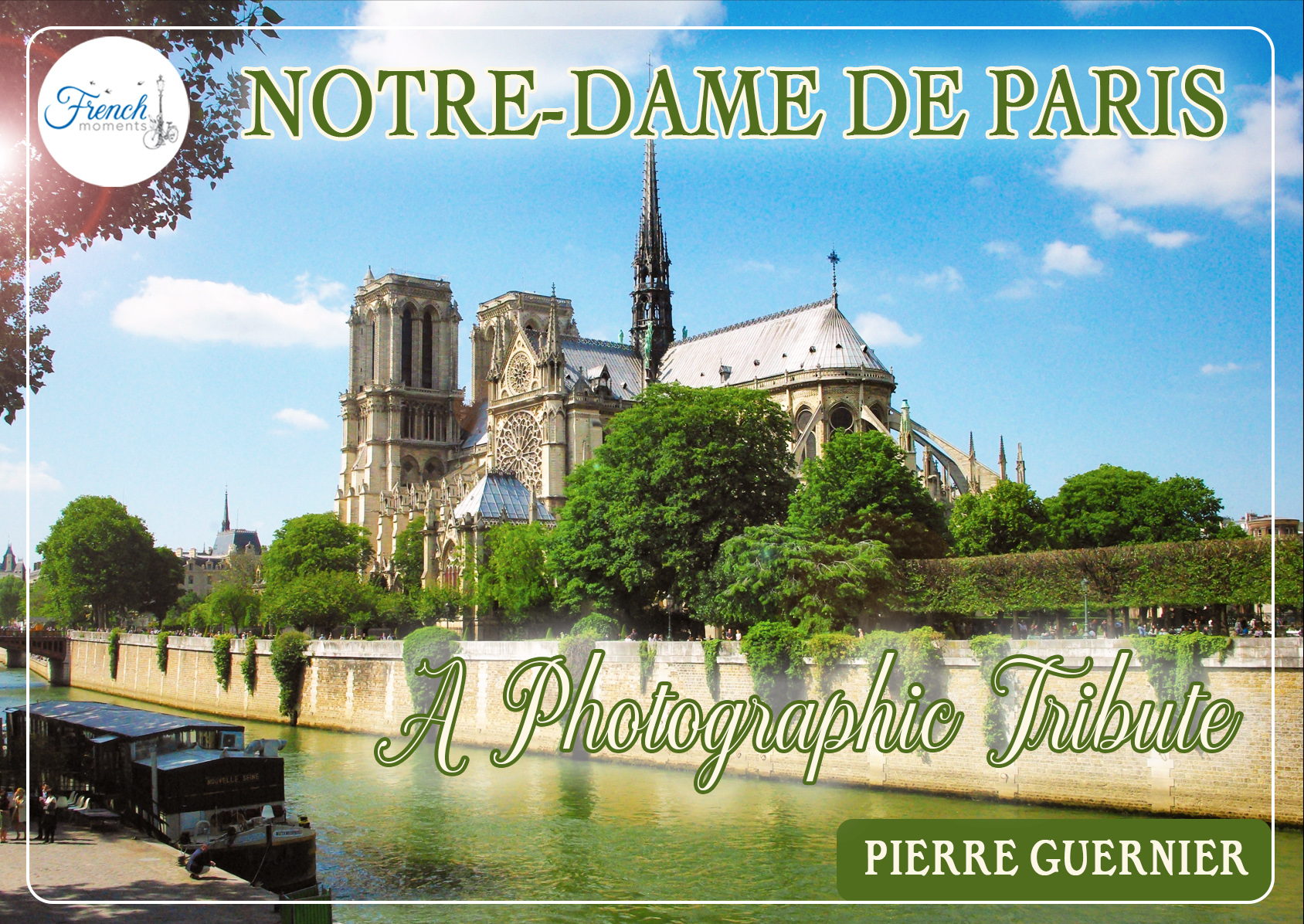 Description of the West Facade of Notre-Dame

The facade is 41 metres wide and includes four powerful buttresses and three portals. The West Facade of Notre-Dame cathedral took less than a century to be built. Construction started in 1200 under the direction of Paris’ bishop Eudes de Sully.

The imposing western facade of the cathedral is a harmonious ensemble based on a play between vertical and horizontal lines:

The height between the ground to the base of the towers is 43 metres and includes many stages that carry a symbolic meaning.

The facade is governed by a series of squares and circles, bearing symbolic significance.

The square refers to limited created space whilst the circle is about the boundless, that is the perfect figure without beginning or end – the image of God.

The West Portals of Notre-Dame

The three portals of the Facade of Notre-Dame are not identical but all are decorated with a multitude of characters.

Four buttresses support the facade, two for each tower, and frame the three portals. On them are niches housing large statues restored by Viollet-le-Duc in the 19th century. They are from left (North) to right (South):

Portal of the Last Judgment (centre)

The central portal was built in the 1220s-1230s and was the last of the portals to be completed. It underwent two alterations in the 18th century and complete restoration by Viollet-le-Duc in the mid-19th century.

The trumeau houses a statue of a ‘Beau Dieu’ (a Christ teaching).

The doors and lintels

The beautiful doors with their wrought-iron strap hinges and arabesques were restored in the 19th century.

Under the tympanum are two lintels with two friezes.

The lower lintel shows the resurrection of the dead and on the upper lintel archangel, Michael is weighing their souls. The good souls are led to the left (towards Heaven, that is Christ’s right) and the condemned are directed to the right by a devil (to hell).

The sculptures on the tympanum depict the Last Judgment from the Gospel of Matthew and reveal Christ seating on the throne of glory. The wounds on his side and on his hands and feet are a reminder of the Passion.

An angel on his right holds the spear and the nails of the Cross. Another angel on Christ’s left is seen holding the Cross. On either side of Jesus, Mary and John are praying for the lost souls.

The archivolts include a multitude of saints (angels, patriarchs, prophets, doctors of the church, martyrs and virgins) that represent the Heavenly Court. Hell is present but takes up a very small space at the bottom of the four last arches. The fifth arch shows a crowned and chubby devil crushing three damned souls: a rich man, a bishop and a king.

Portal of the Virgin (left)

The left portal (North) of the Facade of Notre-Dame was built in the 1210s-1220s and is the only one to be topped by a triangular gable. It shows the death of Mary, her assumption of heaven and her glorious coronation.

Destroyed in 1793 during the French Revolution, they were replaced by Viollet-le-Duc in the 19th century.

The trumeau between the two doors has a statue of a Virgin with a Child. The group is crowned by a canopy that represents Heavenly Jerusalem and the Ark of Covenant.

Underneath the trumeau is a beautiful bas-relief depicting the Original Sin with Adam, Eve and Lilith the serpent.

The lower lintel of the tympanum shows three prophets on the left and three Old Testament kings on the right, holding phylacteries.

The upper lintel depicts Mary lying on her death bed, surrounded by Jesus and the Twelve Apostles. Two angels at Mary’s head and feet are about to lift her to heaven.

The centre of the tympanum shows Mary in Heaven, seated with her Son on the throne. Jesus is seen blessing her and giving her a sceptre. At the same time, she is being crowned by an angel.

The four successive archivolts are populated with characters of the Heavenly court witnessing the coronation: angels, patriarchs, kings and prophets.

The right portal (South) dates from around 1200.

The portal shows scenes from the childhood of Jesus from the Annunciation of Mary to the Adoration of the Magi.

The trumeau between the two doors has a statue of St. Marcel, a bishop of Paris in the 5th century. He is depicted with his crosier into a dragon’s head.

The door-jamb houses full-size statues. On the left: a king, the Queen of Sheba, King Solomon and St. Peter. On the right: St. Paul, King David, Bathsheba and a king. Destroyed in 1793 during the French Revolution, they were replaced by Viollet-le-Duc in the 19th century.

The two fine wrought-iron doors date back to the 13th century.

The tympanum has a magnificent Virgin with a Child in the middle. It seems that these very old statues of Romanesque style came from the church of St. Mary which was dismantled when the choir was expanded. Mary is seen seated on a throne under a canopy wearing a crown and a sceptre. On her knee, Jesus holds the books of the Law. To the left of the throne stand an angel, the bishop of Paris and maybe his treasurer. To the right is another angel and a king of France.

Under the tympanum are two lintels with two friezes. The lower frieze tells the story of the marriage of Joachim and Anne and the marriage of Mary and Joseph. The upper frieze shows scenes from the Annunciation, the Nativity and the Epiphany.

Above the tympanum, the archivolts depict the heavenly court (angels, kings, prophets and elders of the church) singing praise to God.

The Gallery of Kings of the Facade of Notre-Dame

The Gallery of Kings

The gallery of kings is a row of 28 statues representing each one of the kings of Judah, descendants of Abraham and human ancestors of Mary and Jesus. The original statues were painted and added to the facade in the 13th century. They were mistaken for representing the kings of France which led them to be beheaded and taken away from the facade during the French Revolution.

In 1977, 143 remains of the statues were discovered during work in the Chaussée d’Autin. They can be seen at the Middle-Ages Museum (Hôtel de Cluny).

The statue dedicates the whole West facade to the Virgin. It is a copy of the original Virgin with a Child ordered by Viollet-le-Duc in the mid-19th century.

The rose window of the West Facade of Notre-Dame is 9.60 metres in diameter. This is the oldest rose window installed in the cathedral. The window dates from 1225 and forms a halo above the Virgin with a Child statue placed in front of it.

It has retained from the Middle Ages its original glass and tracery. The rose window depicts symbolic scenes from the Zodiacs and the Labors of the Months.

Since 1730, the interior view has been blocked by the great organ case.

On the balustrade to the left and right of the rose window stand the statues of Adam and Eve which were added by Viollet-le-Duc.

Between the West rose window and the Galerie des Chimères is a colonnade linking the two towers.

The Grand Gallery, also known as the Chimeras Gallery (Galerie des Chimères) connects the South and North towers. In the mid-19th century, Viollet-le-Duc placed there a group of chimeras that did not exist in the Middle Ages.

The Towers of Notre-Dame

The towers are not exactly identical. The North tower is slightly stronger and larger than the South Tower.

It seems that from medieval documents it was planned to crown the towers with spires. During the restoration of Notre-Dame in the mid-19th century, architect Viollet-le-Duc did not follow the initial project and Notre-Dame was left without spires. Both towers reach a height of 69 metres.

The South Tower houses the enormous bell ‘Emmanuel’ accessible via wooden stairs. Notre-Dame’s biggest and oldest bell was cast in 1631.

Legend has it that Parisians threw their jewels and gold in the molten metal to cast the bell and it is thanks to these that Emmanuel sounds a pure F.

Fortunately, Emmanuel was saved during the Revolution and the bell still tolls today on important historical dates in France and on religious holidays such as Christmas and Easter.

The South Tower was accessible to the public before the great fire of April 2019.

The North Tower was completed in 1240 and its counterpart, the South Tower in 1250. Unlike the South Tower, it was not open to the public before the Great Fire of April 2019.

This book has been a great resource that helped me better understand the Gothic movement in art from the 12th century to the Renaissance. An architectural style that first originated from France and spread all over Europe.

For more info about Notre-Dame cathedral, check out the official website.