The Village de Charonne is a former commune that joined the territory of Paris in 1860. It is now part of the 20th arrondissement. This little district has preserved its charming provincial village atmosphere with its main street and its 12th-century parish church.

Description of the Village de Charonne

Rarely mentioned in tourist guides, the village de Charonne is worth a visit if you wish to see something different, something authentic.

This curious yet picturesque district is undeniably charming with its cobbled streets, its low houses and the bell tower of Church Saint-Germain-de-Charonne.

Far from the bustling Paris that we all know with its famous monuments, the village de Charonne is located in the 20th arrondissement, at a stone’s throw from the Boulevard Périphérique, Paris motorway ring. In any season of the year, a stroll through the district is a total change of scenery.

Guided Tour of the Village of Charonne 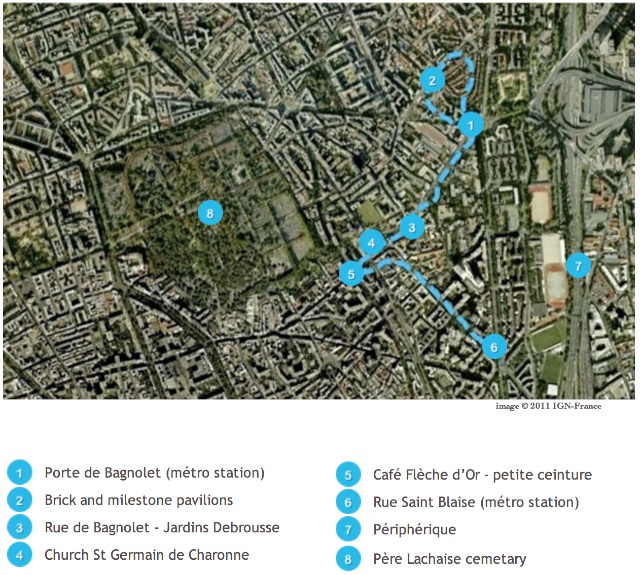 To access it, exit the metro station Porte de Bagnolet (line 3) on the side of Boulevard Mortier and climb up the stairs to the right of rue Géo-Chavez.

In a maze of cobbled narrow streets (Irénée-Blanc, Georges-Perec, Paul-Strauss, Jules-Siegfried), La Campagne à Paris consists of brick or millstone pavilions. At the beginning of the 19th century, these cute little houses were those of the quarry workers of the rue des Montibœufs.

To the left extends the Jardin de l’hospice Debrousse. In the 18th century, the garden belonged to the domain of Bagnolet. The owner was the Duchess of Orléans, the natural daughter of Louis XIV and Madame de Montespan.

You can visit the garden which houses a vestige from this era: the pavilion of Hermitage. This elegant rococo building reopened to the public in February 2005. It is the only Parisian folly of Régence style. Inside, admire the mural paintings.

Go out through the Rue des Balkans whilst trying to catch sight of the charming houses covered with Virginia creeper.

Cross the square Antoine-Blondin and reach Rue Vitruve where a commemorative plaque remembers French singer Barbara. There is also a curious mural sculpture depicting the legend of the salamander.

From there, enter the small park of Square des Grès. Despite the fact that the district is surrounded by modern (and rather ugly) buildings, ravishing low houses can be found there, a haven of tranquillity.

The enchantment continues on Rue Saint-Blaise. It was the high street (Grand-Rue) of the former village.

With its cute old-looking lampposts, this narrow cobbled street is lined with a few shops, including inviting boulangeries-pâtisseries.

Observe opposite number 85 a porch dating back from the time of Louis XV.

A simple look toward the mount on which the church Saint-Germain-de-Charonne sits with its squat bell tower, and the feeling of being in a rural little town outside Paris comes back even more vividly.

The Romanesque church dates back to the 12th century. It displays interesting architecture due to successive additions throughout the years.

A small countryside cemetery flanks the church. It is the only one of its kind in Paris along with the church of Saint-Pierre-de-Montmartre.

Back to the Rue de Bagnolet, after a walk until number 102 bis, stands a disused railway station. It is one of the few “Gares de la Petite ceinture” that existed in Paris. The “Petite ceinture” was a railway ring encircling Paris.

From 1852 this circular connection linked the main stations of Paris within the fortified walls on which was later built the Périphérique highway.

From 1934, the network was closed down and some stretches of tracks still remain to this day. However, the future of its rehabilitation – or redevelopment into new uses – is still subject to debate.

Today, the station in Rue de Bagnolet hosts a stunning and funky restaurant: the Café de la Flèche d’Or. It is a particularly lively and illuminated place at nightfall. In the café-concert, Patrons can admire the locomotive that surmounts the bar and the glasshouse of the terrace which dominates the abandoned railway.

If you walk along the rue des Vignoles, you will find a number of dead ends dating from the time when the area was countryside. Some of these dead ends are closed to the public, others can be seen from the street: Impasse de Bergame, Impasse Paule, Impasse Rolleboise, Impasse Saint-Pierre…

To the south of the Père Lachaise cemetery are other picturesque alleys: cité Aubry, rue Ligner, rue de la Réunion…

Find out more about Charonne