New posts
You are at:Home»French History»Commemorating Victory in Europe Day in France

Victory in Europe Day takes place on the 8th of May 1945. The public holiday in France commemorates the victory of the Allies over Germany. The date also marks the end of Adolf Hitler’s Third Reich and the Second World War. VE Day proclaims the unconditional surrender of the armed forces of Nazi Germany. If English speakers call this day the “VE Day” (Victory in Europe Day), the French refers it to le 8 mai 1945 or Jour de la Victoire en Europe.

From the Liberation of Paris to the end of WW2

The Germans had occupied Paris and the north half of France from the 22nd of June 1940.

Four years later, the Liberation of Paris took place from the 19th August 1944 to the surrender of the Wehrmacht on the 25th of August 1944. It would last another 10 months.

The 1945 capitulations of May and September Signature of the German Surrender 7 May 1945

On the 7th of May 1945, German Marshal Alfred Jodl signed the German Army surrender in a high school in Reims. This place then sheltered the Supreme Headquarters of the Allied Expeditionary Force.

Journalists from the West quickly spread the news of the surrender and celebrations began. However, fights were still raging on the eastern front. Germans signed another surrender act with the Allies in Berlin.

German Marshal Alfred Jodl signing the surrender of German armies in Reims on the 7th May 1945.

The Musée de la Reddition in Reims has on display the act of military surrender signed on the 7th May 1945. The original document was written in English and signed in the same premises of the museum. German Instrument of Surrender signed in Reims 7 May 1945

On the 8th of May, the belligerents signed the second capitulation in a villa in Eastern Berlin.

Representatives from the USSR, Great Britain, France and the USA had arrived just before midnight.

Marshal Wilhelm Keitel led the German representatives. It is he who signed the capitulation act at 11.01 pm (central European time).

Consequently, due to the time difference, the surrender took place on the 9th of May for the soviets and the allied central-oriental countries.

The official capitulation of Japan (“V-J Day“, Victory over Japan Day) occurred on the 2nd of September 1945. On that day the Minister of Foreign Affairs Mamoru Shigemitsu signed the surrender documents on the USS Missouri bridge in the Tokyo bay. This was the end of the Second World War.

Victory in Europe Day: the 8th May in France

French authorities have made the 8th of May a commemorative public holiday since 1953.

In 1959, French President Charles De Gaulle suppressed the 8th of May as a public holiday. In order to be on friendly terms with Germany, Valéry Giscard d’Estaing (French president from 1974 to 1981) also suppressed the commemoration of the Allies victory in 1945.

Finally, in 1981, François Mitterrand requested the restoration of the commemoration of the 8th May. The newly elected French president also made it a public holiday again.

Nowadays, most French people respect and commemorate this public holiday. Shops are closed and families remember this symbolic day by bringing flowers to the War Memorial.

This is the case in Paris where the French President and officials lay wreaths on the tomb of the Unknown Soldier at the Arc de Triomphe.

Also, the Arc de Triomphe in Paris is adorned with a giant French flag under its arches. The Tricolour often stays there until Bastille Day.

In 2015 France celebrated the 70th anniversary of the Peace Treaty with a great number of commemorations and events.

The 75th anniversary of VE Day in France took place on 8th May 2020. These were rather special commemorations as they were strictly limited due to the pandemic. 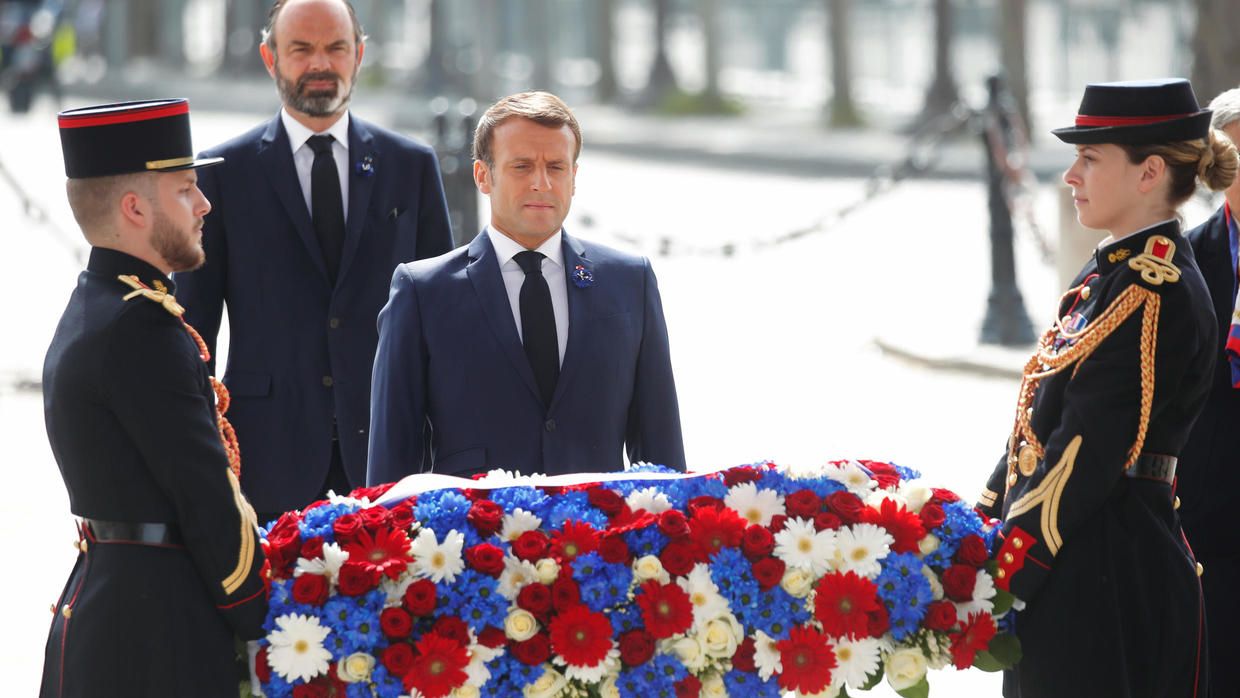 Find out more about the emblematic Cross of Lorraine, the symbol of Free France. Cross of Lorraine by French Moments