Rouen’s most prestigious monument, the lofty and imposing cathedral, is one of the most exquisite pieces of pure Flamboyant work existing. Tour Saint-Romain is dedicated to St. Romain. It is one of the three mighty towers that make the cathedral of Rouen one of the country’s most stunning sanctuaries. On the northern side of the West front of the cathedral of Rouen lies the mighty Tour Saint Romain, four centuries older than its counterpart, the Tour de Beurre.

Work on the tower started in 1145, so it is the oldest part of the Gothic construction. Its last storey, in Flamboyant style, clashes with the rest of the more sober building. The Saint Romain tower burnt down on the 1st June 1944, after Allied bombing the day before. The bells melted inside and only the walls were left standing. Its unusual axe-like roof, covered with slates and decorated with gilded images of a sun, has been reconstructed only recently and inaugurated at Easter 1987. 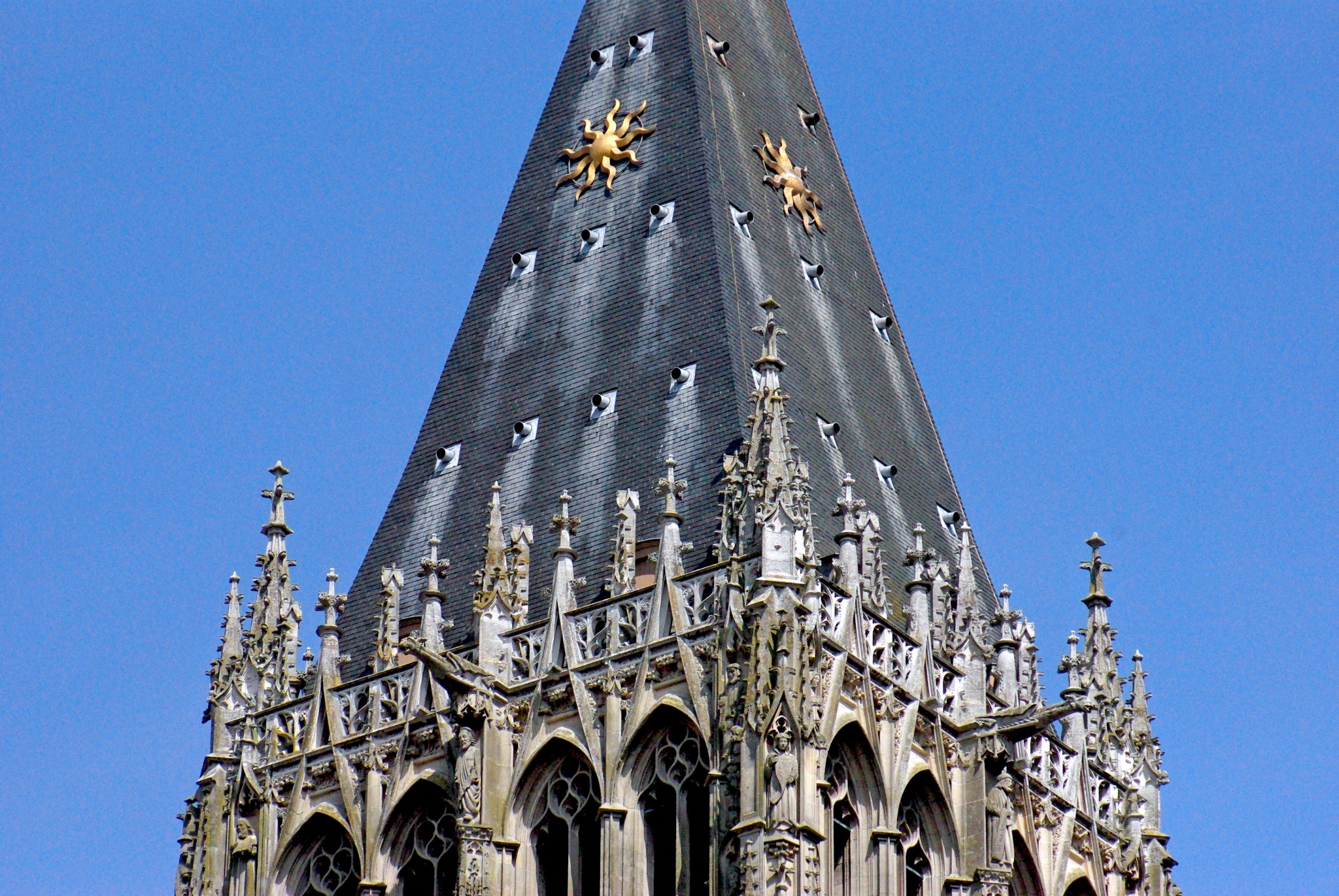 The tower is best seen from the Place de la Cathedral and the streets of rue Saint-Romain and rue du Gros-Horloge. It is 82 metre tall. The ground floor of the Tour Saint-Romain is occupied by a lower room which houses the baptistery.

The second floor is a large room with a double level of windows. Above it is the belfry floor which houses the largest bell of the cathedral, the Jeanne d’Arc.

The Legend of St. Romain and the Gargouille The tower takes its name from Rouen’s most venerated bishop: St. Romain (or Romanus). According to tradition, the patron saint lived under King Dagobert I and is remembered as a protector of the city. There were wild swamps on the left bank of the Seine, opposite the old town, where a terrifying dragon lived who “devoured and destroyed people and beasts of the field”. The people of Rouen named it “Gargouille”.

Joined by a man condemned to death, having nothing to lose, they crossed the Seine and chased the dragon. When the Patron Saint caught it, Saint Romain drew the sign of the cross on the monster. Then he put his cape around it and dragged the beast to the parvis of the cathedral where the Gargouille was burnt to death. After that, it was a local custom for the bishop of Rouen, once a year, to grant one prisoner who had been condemned to death, his freedom (a custom which lasted until 1790). Needless to say, this legend draws similarities with the Graouilly of Metz.