The Tour de France is the world’s most famous bicycle race whose first edition was first organised in 1903. The event is a multiple stage race held each year in France with occasional stages in nearby countries. In July the whole country of France vibrates to the beat of the race, with its share of history and tradition. For all, the ‘Grande Boucle’ is synonymous with endurance and true sportsmanship.

The first edition of the Tour de France was organised in 1903 by Henri Desgrange et Géo Lefèvre to boost the sales for the sponsoring magazine L’Auto. The Tour de France in the early 20th century was rather different from that of today: riders were running up to 400 km each day finishing late in the night without any support crews. Many of the roads leading to the mountain passes were not even paved and it was the riders’ responsibility to carry their own tools and fix their bicycles if needed.

Similar to the Giro d’Italia and Vuelta a España, the race is the oldest and the most prestigious of the kind. It has crossed France each year since, except during the First and Second World Wars. Today, the race is organised by the Amaury Sport Organisation. To welcome a stage start or finish of the Tour de France brings prestige and generates financial benefits to the hosting town.

Format of the Tour de France

Although the race originally ran around the perimeter of France, nowadays it is divided in stages whose itineraries are discontinuous.

The distance varies year to year but is usually about 3,500 km long (2,200 miles) with each day’s stage lasting up to five and a half hours and covering up to 225 km.

The advertising caravan precedes the cyclists along the route. Set like a procession, the colourful and decorated trucks and cars distribute goodies and souvenir items (candy, cheese, keychains, hats…) to the crowd gathered along the route.

There are three main types of stages in the Tour de France:

The objective of the Tour de France is to finish the race with the lowest accumulated time.

The leader of each stage of the race has the privilege to wear the yellow jersey or ‘maillot jaune’. The first winner to wear it was Eugène Christophe in 1919. The rider who has worn the yellow jersey for the longest time was Eddy Merckx (96 stages).

French TV channels France 2 and France 3 hold the domestic rights and provide pictures for broadcasters around the world with the help of 300 staff members, four helicopters, two aircraft, two motorcycles, 35 other vehicles, and 20 podium cameras. The Tour de France is massively followed by millions of viewers throughout the world and is one of the most prestigious and watched sporting events. The race provides France with a formidable promotional campaign for tourism….

The Tour de France is a popular sporting event for the French and visitors alike simply because it is free!

Many spectators would camp out a whole week along the Tour’s itinerary to secure the best view of the race.

People set up picnics along the route of the Tour de France, bringing with them transistor radios to keep up informed with the position of the riders. The atmosphere can be warm and friendly and attending the race at the roadsides can reveal itself a great opportunity to make new friends.

The Yellow Jersey (Maillot Jaune) is worn by the overall race leader of the stage day. It was first introduced by the magazine L’Auto who organised the first editions of the race. Since, yellow has become the iconic colour of the Tour de France.

The Green Jersey (Maillot Vert) is worn by the rider who has accumulated the most points each day.

The Polka-Dot Jersey (Maillot à Pois Rouges) is worn by the rider who obtains the highest number of climbing points. The rider is also called “King of the Mountains”.

The White Jersey (Maillot Blanc), is worn by the best-placed overall rider under the age of 25 each day, also called “Best Young Rider”.

Traditions of the Tour de France

Each year, the Tour de France respects a few traditions:

The Winners of the Tour de France 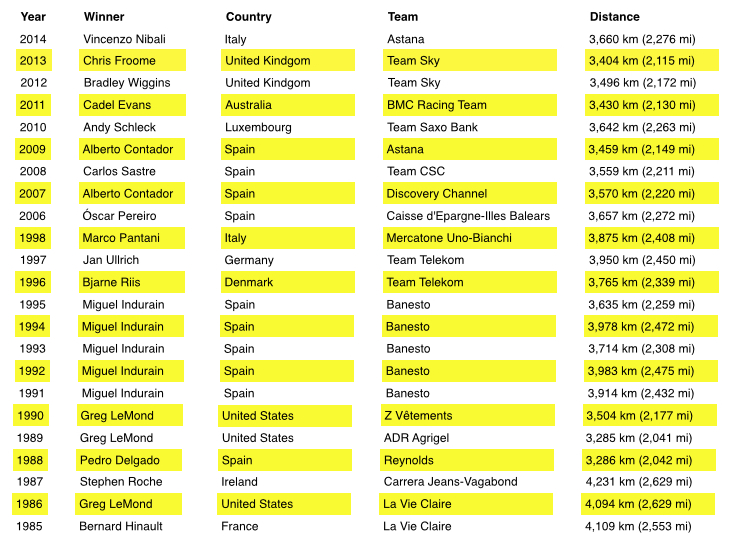 Between 1999 and 2005, Lance Armstrong was the winner of seven consecutive Tour de France. In October 2012, the Union Cycliste Internationale (UCI) stripped the American rider of all his titles after it emerged that he had used performance enhancing drugs.

One rider has won four times:

Editions of the Tour de France

The route of the Tour de France changes each year.

The 106th edition of the Tour de France will start in Brussels and finish on the Champs-Élysées in Paris.

It will criss-cross the East of France (Champagne, Lorraine, Alsace, Franche-Comté, Bourgogne, Savoie, Provençal Alps) with incursions in the Massif-Central, the Pyrenees and the Languedoc. 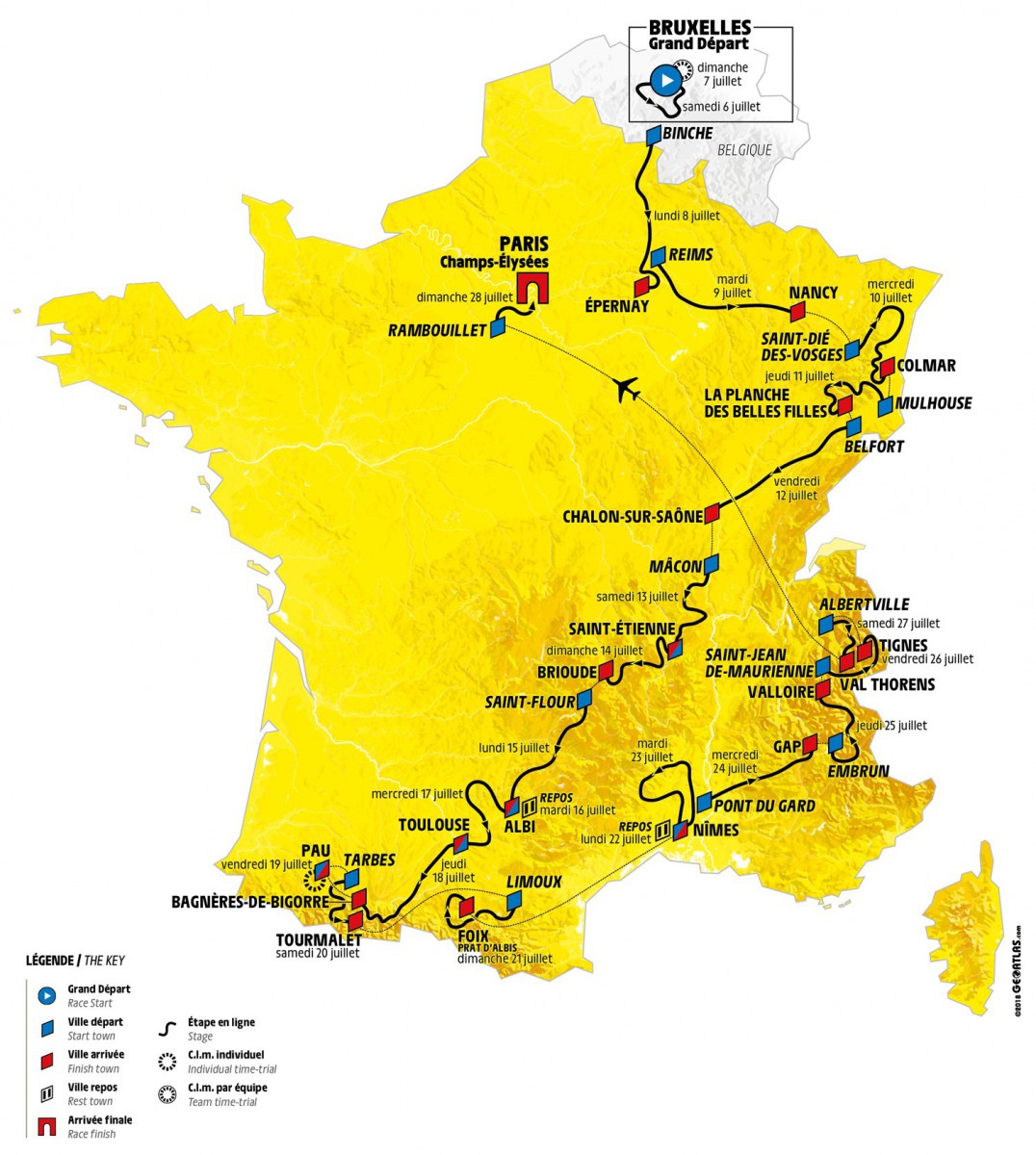 The 105th edition of the Tour de France is interesting for one thing: the itinerary will be 100% in France. It won’t venture in neighbouring countries as it has been the case for previous years. The race will alternate plain and mountain stages… including the epic bends of L’Alpe d’Huez in the French Alps.

The race will cross the beautiful landscapes of Brittany and the Hauts-de-France. The riders will endure the Northern French Alps (Savoy and Dauphiné) and the Massif Central. Carcassonne will make the link to the rest of the race across the Pyrenees. The grand final will take place on 29 July from Houilles (Yvelines) to the Champs-Elysées in Paris. 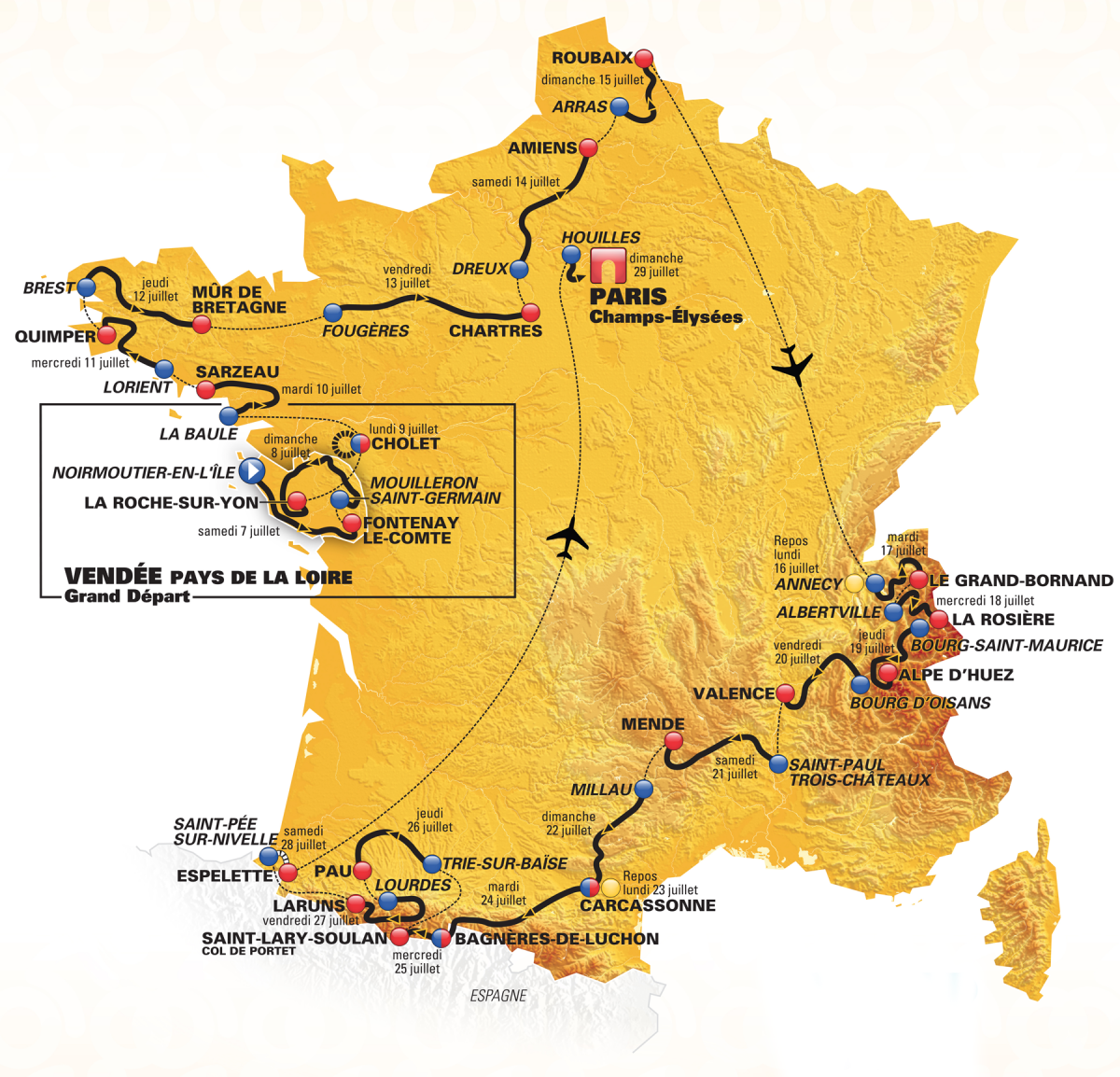 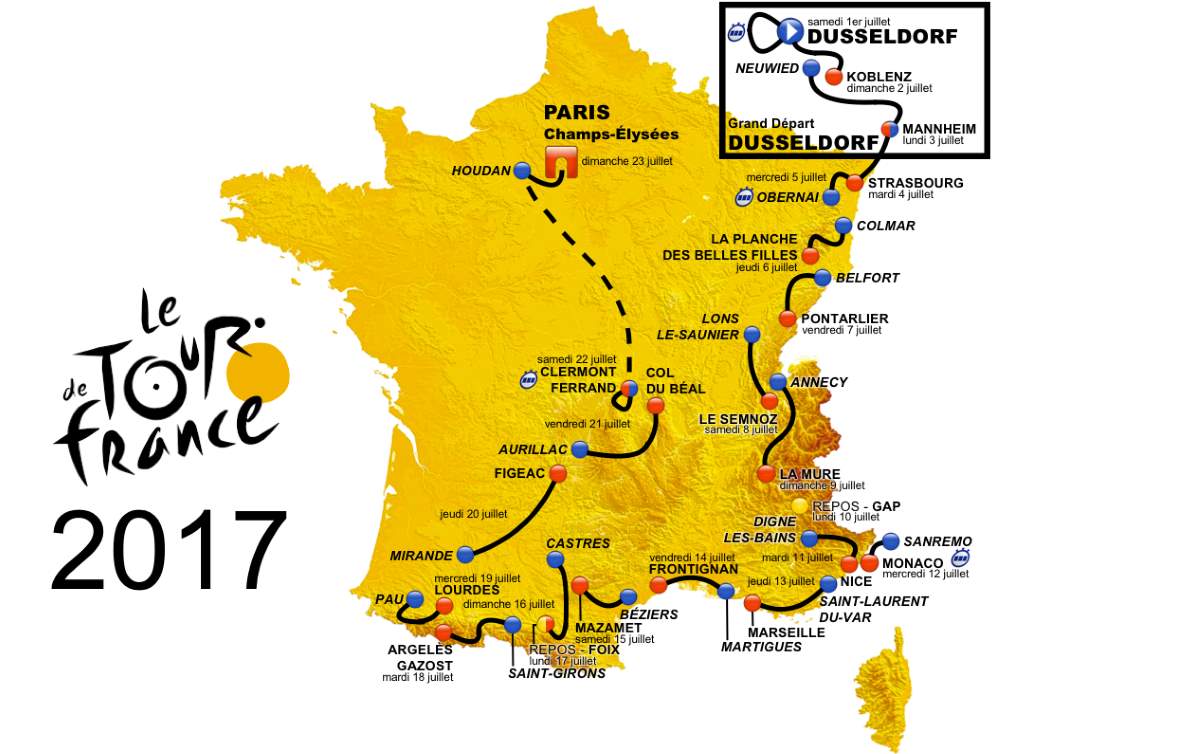 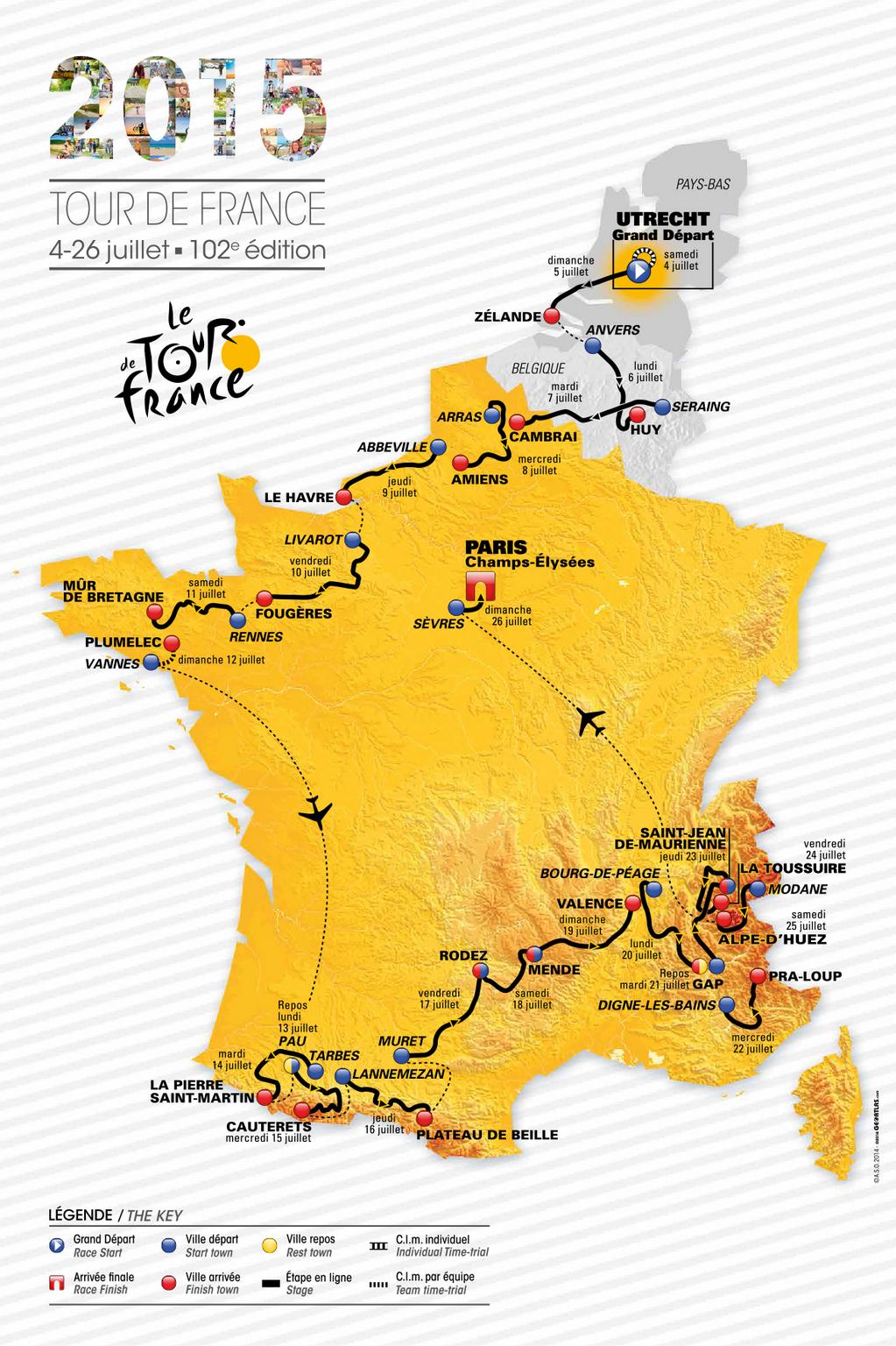 On the 4th July 2015, the 102nd edition of the Tour de France will start in the city of Utrecht in the Netherlands. Although the country shares no direct border with France, it will be the sixth time the Tour de France will have started there after 1954 (Amsterdam), 1973 (Scheveningen), 1978 (Leiden), 1996 (‘s-Hertogenbosch) and 2010 (Rotterdam).

The finish will take place on Sunday 26th July in the Champs-Élysées, after a flat stage (107 km) between Sèvres and Paris.

Find out more about the route of the Tour de France 2015. 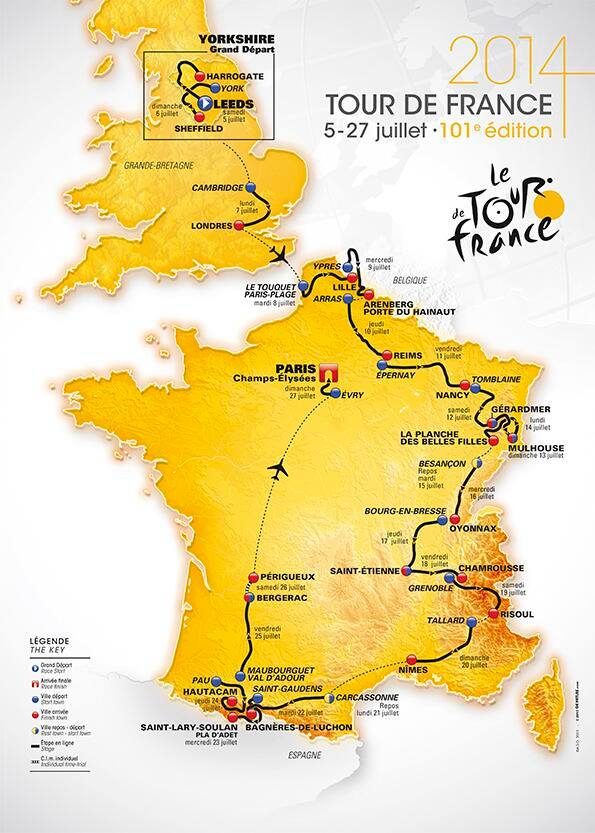 In 2014, the 101th edition of the Tour de France started in Leeds, England on the 5th July and passed through London before arriving in France on the 8th July. The 2014 race included 21 stages covering a total of 3,656 kilometres (2,272 miles), and criss-crossed the eastern regions of France and Belgium, particularly in Ypres, Picardy, Lorraine and Alsace which were severely marked by the WWI fightings. For the first time in the history of the Tour de France, the finish at the Champs-Élysées in Paris (27 July) featured a race called ‘La Course by le Tour de France’ with female riders.

Find out more about the route of the Tour de France 2014.

In 2013, the Tour de France celebrated its 100th edition. For the first time in the history of the race, the island of Corsica was visited during 3 stages. Unlike other previous races, this edition took place entirely in France. The 2013 race included 21 stages covering a total of 3,403 kilometres (2,115 miles), and visited some of France’s most famous sites and landmarks such as Mont Saint-Michel, the walled town of Saint-Malo, the city of Lyon, Alpe d’Huez in the Alps (a double ascent), Nice and the Baie des Anges, the episcopal city of Albi, the châteaux of the Loire Valley and the palace of Versailles. For the first time, a night time finish took place at the Champs-Élysées in Paris.

The winner of the 100th edition of the Tour de France in 2013 was Chris Froome (GBR) from the Team Sky. 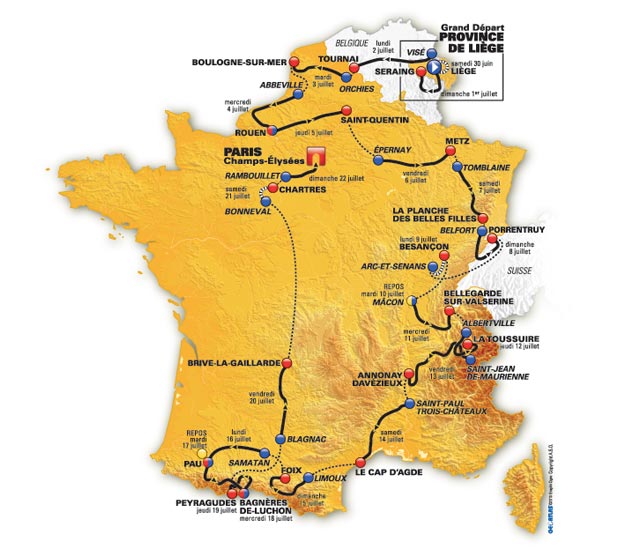 The 99th edition of the Tour de France in 2012 started in the city of Liège, Belgium and included a visit to Switzerland at Porrentruy. Riding mostly of the eastern regions of France (Champagne, Lorraine, Alsace, Franche-Comté, Rhône-Alpes and Provence-Alpes-Côte d’Azur), the riders travelled across the Vosges, the Jura, the Alps and the Pyrenees in 21 stages covering a total of 3,496 km (2,173 miles).

The winner of the 99th edition of the Tour de France in 2012 was Bradley Wiggins (GBR) from the Team Sky.

The Tour de France in Europe

Although the Tour de France is mainly held in France, it has visited neighbouring countries many times since its creation in 1903. The following European states have host a stage or part of a stage since the 1950s: Andorra, Belgium, England, Germany, Ireland, Italy, Luxembourg, Monaco, the Netherlands, Spain and Switzerland.

Since 1954, the starts outside France have included the following cities and countries: