Approaching Toul, visitors admire the elegant silhouette of the Toul Cathedral, a witness to the rich historic past of this ancestral city of Lorraine.

The residents of the small town of Toul have good reason to be proud of their beautiful cathedral. And yet, it avoided the worst of the bombings of the Second World War which required several decades of restoration. 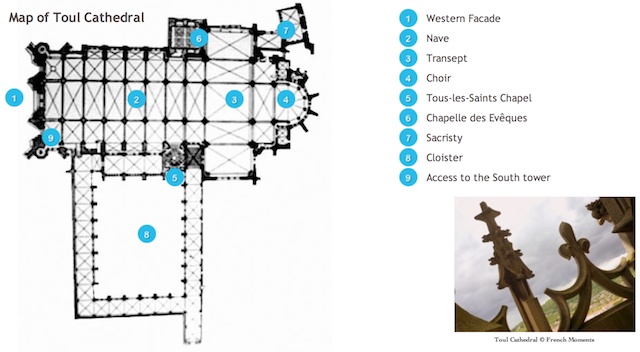 The cathedral is a perfect example of flamboyant gothic art in Lorraine with its two towers visible from afar. The first stone of the current cathedral was laid in 1221. Work commenced on the chancel by reusing part of the foundations of the old Roman building. The chancel was completed in 1235. Because of the wars between the Lorrainians and Burgundians and a lack of funds, construction of the facade and of the towers was completed in 1496 in the flamboyant gothic style.

The cathedral suffered greatly during the Second World War from bombings which sparked fires. The entire roof was destroyed and its restoration took more than forty years. Then in 1978, the cathedral closed for safety reasons.

Work on the exterior was completed in 1995, with the restoration of the clock tower of the golden ball at the junction of the transept. Since 2008, the bulk of the interior work has finally allowed us to appreciate the Cathedral in its former splendour. However, restoration of a beautiful side chapel (under construction until 2012) still needs to be done. The interior restorations have emphasized the bays of the nave, including the paintings.

Over 500 pages it focuses on the development of Gothic architecture with many illustrations and photographs, but not only. I’ve also found interesting the in-depth discussion of the most diverse art forms, including painting, sculpture, metalwork and even book illumination! It also includes specific coverage of the Cathars’ Heresy and the Papal Palace in Avignon. And, of course, it mentions the cathedral of Saint-Etienne de Toul!

The facade of Toul Cathedral deserves to be attentively observed, by virtue of the splendour of the flamboyant gothic style. The tympanums of the three porticos unfortunately lost their 139 statues in the Revolution. The octagonal towers of the facade, while impressive, only measure 65 metres in height. Initially, it was anticipated that they would be topped with spires, following the style of the cathedrals of Cologne or Chartres.

The facade is composed of a central part of four levels, framed by the two towers. 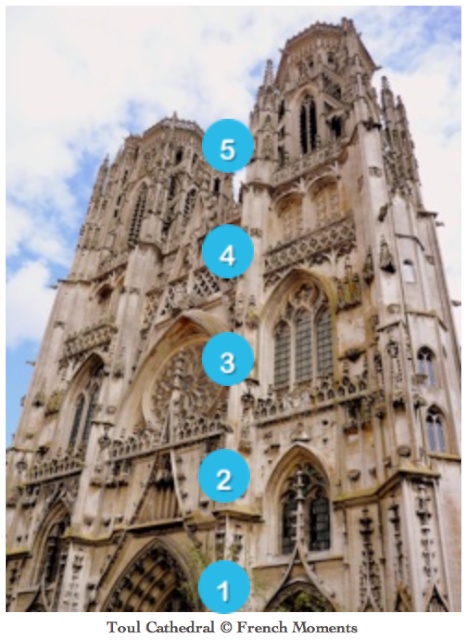 The Towers of Toul Cathedral

For amateurs of and those curious about gothic art, it is possible to climb up the some 360 steps leading to the top of the South tower. The first spiral staircases open onto the gallery linking the two towers, which it is possible to go around. It is a world of gargoyles and other gothic decorations, almost invisible from the street, which reveals itself to the visitor.

Then a second flight of spiral stairs leads to the summit of the South tower, which has a magnificent 360 degree view of the town of Toul, its Vauban fortifications, the magnificent Moselle River and the countryside of Toul (locally called the Toulois).

Note that the tower of the Cathedral can be climbed only in July and August.

The Interior of Toul Cathedral

Two things surprise the visitor upon entering the Cathedral: on the one hand, its great luminosity, due to the multiplicity of stained glass windows and to the very white limestone; and on the other hand, the high nave, simultaneously giving an impression of lightness and strength.

In 1532, the diocese had a Renaissance-style side chapel built: the All Saints Chapel. This chapel is unique in its kind, by virtue of its trompe l’oeil dome, achieved by using different processes of perspective. The dome is crowned by a pretty little skylight.

Note that until the 21st September, the Cathedral can be visited when the tourist office is open.

At 54m by 42m, the cloister of the Cathedral is reputed to be the largest in France after that of the Mont Saint Michel in Normandy. Situated below the level of the cathedral, it opens onto the garden through large triangular bay windows formed by two lancet windows surmounted by three open oculi.

On the interior walls, blind trefoil arches surmount the plinths that carried statues, destroyed in the Revolution. This space of serenity transports us into the past when the monks would come here to pray, under the piercing eye of some gargoyles that warrant close attention.