New posts
You are at:Home»French Traditions»Top 10 Romantic Places in Paris: A Little Guide

Paris is famous in the entire world for being a place conducive to true romance. For a lovers stroll or for those who want to discover little knowns Parisian places, we have compiled a list of 10 Romantic places in Paris to discover as lovers, 4 activities to do and 7 exquisite hotels for a memorable stay.

Why Paris is the romance capital of the world?

Which city in the world can compare to the romance of Paris?

Paris is an amazingly romantic place for enjoying each other’s company arm-in-arm. No wonder Paris has always inspired love!

Romantic Things to do in Paris

Before I reveal our favourite romantic places in Paris, let me give you a few romantic things you can do when visiting Paris… and obviously you don’t have to be there for Valentine’s Day to make them happen!

Here are a few ideas:

The setting for the Phantom of the Opera is perhaps the most beautiful opera house in the world. It’s also a historic place that you can visit: see the main auditorium with the famous Chagall ceiling and the seven-ton chandelier that hangs from its centre, uncover hidden nooks and crannies, admire the sweeping Grand Staircase. Get your self-guided tour ticket! A romantic Gourmand Dinner Cruise on the Seine

Embark for an impossibly elegant way to experience Paris! Spend 2.5 hours cruising along the Seine and wonder at the City of Light by night. You’ll be welcomed with a glass of Champagne or wine before starting a four-course meal unforgettable dinner. Book your cruise!

A cruise on the River Seine, Paris © French Moments

Enjoy a stunning climbing experience at the Eiffel Tower

The Eiffel Tower should not have any secrets for you after this essential cultural experience! You will join a friendly local guide (with no more than 20 people) and clamber up the wrought-iron structure, and hear the story of how the tower was once reviled as an eyesore on the city’s skyline! When you’ll look down from the airy heights, you’ll be spoiled with a fantastic view of the city’s landmarks. Book your climbing experience!

Hop on a Private Tour of Paris in a Citroën 2CV with Driver!

One of the most memorable way to explore Paris in style! Get in an old-school Citroën 2CV (an economy car introduced in 1948) and listen to local history as you’re driven past famous landmarks. The 2CV tour will take you through the best sights in Paris and treat you to passionate descriptions and anecdotes. Plan your private tour in a classic Citroën 2CV!

Now, let’s turn to our Top 10 Romantic Places in Paris, starting with:

Linking the Left and the Right banks of Paris, the famous footbridge spanning the River Seine offers beautiful views of the tip of the Île de la Cité and Pont-Neuf.

Complete your visit by exploring the courtyards of the Louvre and a walk to Pont Neuf and Square du Vert Galant.

Little known, the dead-end street in the ancient neighbourhood of Passy has a majestic view of the Eiffel Tower towering the rooftops of Paris.

Complete your visit by exploring the neighbourhood of Passy: the adjacent place de Costa Rica (look up for the spire of the Eiffel Tower!) and the shopping precinct of rue de Passy. The historic Luxembourg garden is an oasis of greenery in the Left Bank of Paris, not far from the busy district of Saint-Germain-des-Près. To the north of the park, the French Senate occupies the magnificent Luxembourg Palace. The formal layout of the park includes a grand bassin and the beautiful Medici’ fountain.

Complete your visit with a stroll in the Latin Quarter and the Panthéon.

Find out more about the Luxembourg Garden on the blog.

Bordering the River Seine from Pont Saint-Louis to Pont de la Tournelle, Quai d’Orléans is situated on the Île Saint-Louis. Even in the middle of Winter the street is ‘magnifique’ with splendid views of the chevet of Notre-Dame (unfortunately under restoration following the great fire of April 2019). Don’t forget to look for the spire of the Eiffel Tower in the distance from Pont de la Tournelle.

Complete your visit with a stroll on Quai de Bourbon, Place Louis Aragon and Pont Saint-Louis.

Find out more about the Ile Saint-Louis on the blog.

5. Place des Vosges and the Marais

The delightful Place des Vosges is arguably one of the most beautiful squares of Paris. It is therefore the oldest along with Place Dauphine on the Ile de la Cité. Built in the early 17th century, it is surrounded by symmetrical arcaded houses which alternate stone and brick. A green park occupies its centre.

Complete your visit with a stroll in the Marais. This historic district of Paris includes many aristocratic mansions dating back to the 17th and 18th centuries.

Rue de l’Abreuvoir is situated on the hill of Montmartre. The most picturesque view is from the square of Place Dalida, at the end of the street. Do not miss strolling along the Allée des Brouillards to reach another charming little square: Place Casadessus.

Find out more about the village of Montmartre on the blog.

One of Paris’ most beautiful public park created in the 18th century. With its English garden style, Parc Monceau features many statues and follies (scaled-down architectural features) such as a pyramid and columns.

8. Place Saint-Georges and the Museum of Romantic Life

The charming little square is bordered by elegant hôtels particuliers built in the 19th century and ornate with a retro Paris métro sign.

Nearby is the exquisite Museum of Romantic Life set in a haven of greenery.

Find out more about Place Saint-Georges and the Museum of Romantic Life.

Within a stone’s throw of Place Saint-Germain-des-Prés, the exquisite rue de Furstemberg opens onto a shady little square reminiscent of those romantic movies based in Paris.

Complete your visit by exploring the trendy and busy neighbourhood of Saint-Germain-des-Prés and its legendary cafés!

With the Sibylle Temple overlooking the vast public park from the top of a cliff, the Buttes-Chaumont has kept since its opening in 1867 the romantic charm of the Second Empire. The park includes a grotto with an artificial waterfall set in old gypsum and limestone quarry as well as several cafés, two Guignol theatres and two Waffle stands.

Complete your visit by exploring the picturesque little streets of Quartier d’Amérique on each side of rue de la Mouzaïa.

Seven of the most romantic hotels in Paris

Some ideas for where to stay in Paris’ most romantic hotels. The decoration of these hotels is sumptuous and display Antique velvet furniture, rococo reliefs, Belle Epoque looks, artwork propped up against the walls… Some even offer glorious views of the Eiffel Tower or the river Seine. 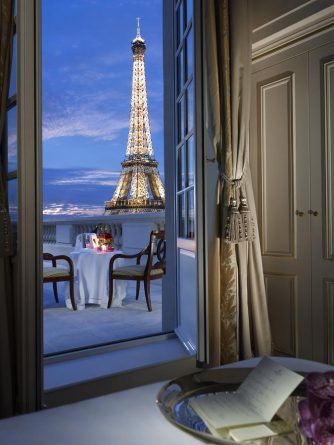 The Eiffel Tower from Shangri-La 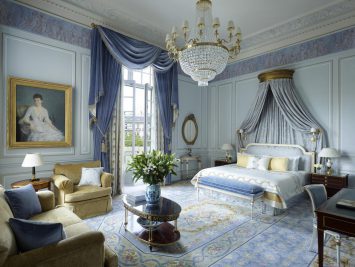 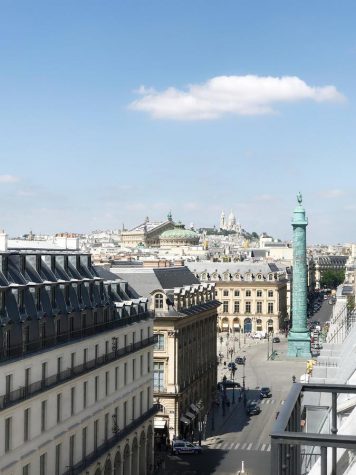 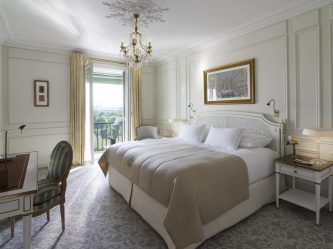 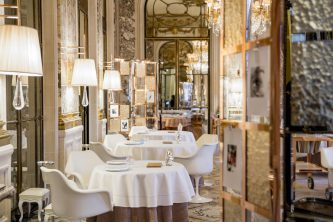 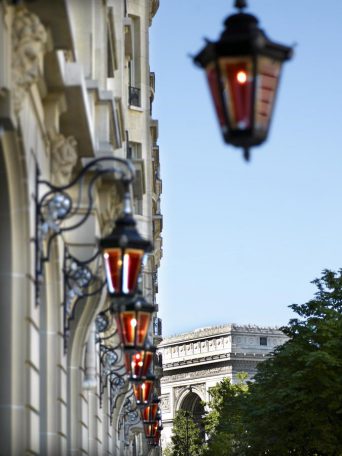 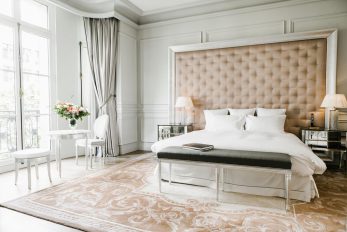 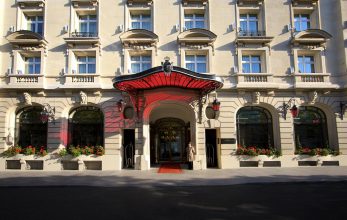 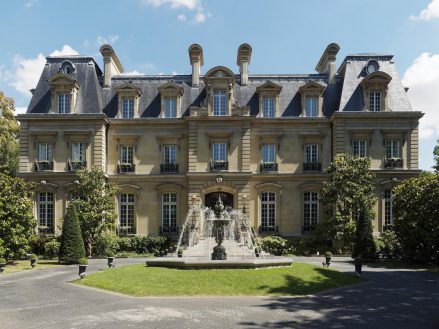 The historic mansion of Saint-James Paris 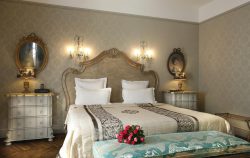 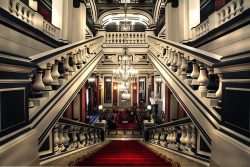 The Eiffel Tower seen from the Plaza Athénée

The façade of Plaza Athénée 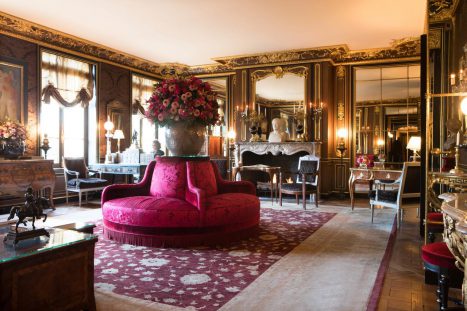 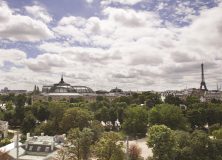 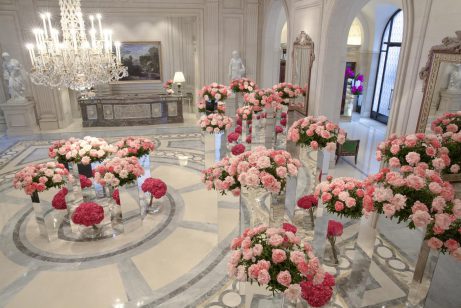 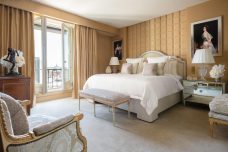 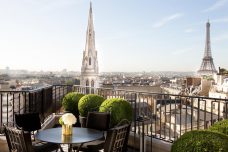 Book your stay in Paris!

Check out the map below to choose from a wide range of accommodation in Paris!

If you know of any other romantic places in Paris, please let us know by leaving a comment below!

Loved this article about the Romantic Places in Paris? Pin it for later:

Some of the links above are  Frenes so if you’re planning a trip, using these links helps me keep things running. There’s no extra cost to you. All you have to do is click the link and any booking you make is automatically tracked.