New posts
You are at:Home»Blog»Top 10 Most Beautiful Railway Stations of France

Most cities of France are reputed for their old town centre containing historic monuments and landmarks. A cathedral, a church, a town-hall, a market-hall, a gatehouse, a belfry or a clock tower, without forgetting a castle or a palace: these are the ingredients that make a town typically European (and worth visiting!). Visitors from the New World are sometimes surprised to discover in the railway stations they’re passing through an amazing architecture worth mentioning in tourist guides. Based on this, we thought it might be interesting to compile a list with the ten most beautiful railway stations of France.

Many French railway stations date back to the 19th century and have since been listed as historic monuments by the French State. Some of them feature a clock tower that has become an iconic landmark part of the city’s skyline (Colmar, La Rochelle, Limoges, Gare de Lyon in Paris, Metz, Rouen), others have kept their monumental iron, steel and glass train sheds (Gare du Nord in Paris, Strasbourg). Finally, some have been recently designed for the purpose of TGV connections (Paris CDG, Lyon Aiport Station, Lille-Europe, Avignon-TGV).

If you wish to add your favourite French railway station, leave us a comment!

At completion, the Neo-Romanesque station of Metz was the flagship of the new town erected by the Germans. The vast building carries an extraordinary symbolic meaning, praising the power of the German Empire.

The station echoes the shape of the church (at the departure hall with the mighty clock tower) and an imperial palace (at the arrivals hall and the ‘buffet’), which recall the religious and temporal powers of the Holy Roman emperor during the Middle-Ages.

Possibly Paris‘ most beautiful railway station, the current Gare de Lyon was built for the 1900 World Exhibition. The building is known for its beautiful 67 metre high clock-tower which is reminiscent of that of Big Ben – but just smaller! The station includes a world-renowned restaurant: le Train Bleu, a fine example of Art Nouveau style.

The station is named after the city of Lyon where trains run through on their way to the South of France. TGV services depart Gare de Lyon to Dijon, Besançon, Belfort-Montbéliard, Mulhouse, Basel, Zurich, Lyon, Geneva, Bern, Grenoble, Marseille, Toulon, Nice, Turin, Milan, and Figueres.

It looks like a palace but this is a railway station! The station is named after the Benedictine Monks whose monastery used to stand on the site until its destruction during the French Revolution.

The building features an elegant clock tower of 60 metre high similar to that of Paris-Gare de Lyon. A surprising dome covered in green copper was built above the passenger concourse. The station is situated on the railway line from Paris to Montauban.

The monumental façade resembles to a triumphal arch and features 23 statues representing the principal cities served by the Chemin du Fer du Nord railway company such as Paris, London, Berlin, Frankfurt, Warsaw, Amsterdam, Vienna, and Brussels. The station is organised in a U-shape common to a terminus station. With TGV linking Paris to Lille, London, Brussels, Amsterdam and Cologne, as well as suburban trains and métro lines, Gare du Nord is currently the busiest railway station in Europe.

The railway station of La Rochelle is a monumental building, dominated by a 45 metre campanile, higher than La Rochelle’s famous medieval towers.

Much like the railway station in Metz, Strasbourg’s Railway Station was erected by German authorities and served the military interests of the Second Reich. Its proportions were gigantic for its time: a 128 metre long façade inspired (loosely) by the Renaissance, with two storeys, a welcome hall and arrival hall and 300 metre-long platforms.

The railway station recently underwent major renovations in view of the arrival of the TGV Est Européen in June 2007, with, in particular, the installation of a huge glass roof covering the whole of the façade.

The station marks the southern terminus of the Paris-Marseille railway line. For practical reasons, it was built on top of a plateau dominating the city-centre. A monumental flight of stairs of 104 steps was opened in 1926 to connect the station to the city-centre. Saint-Charles is linked to Lyon, Lille, Strasbourg, Frankfurt, Nantes, and Nice. It only takes 3 hours to reach Paris by TGV. 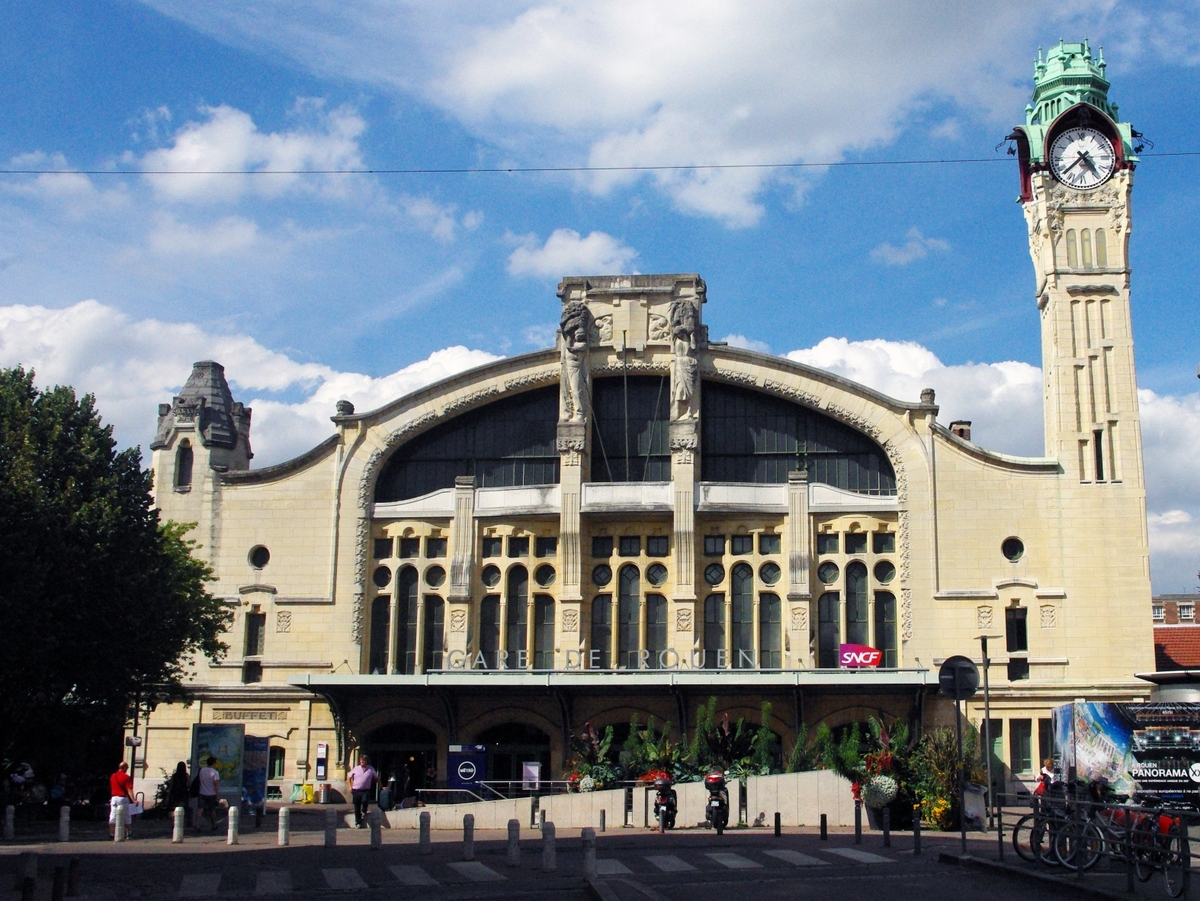 The monumental façade is topped by 4 allegorical statues of Bordeaux, Toulouse, Limoges and Nantes.

The façade of Lille Flandres station used to be that of Gare du Nord, Paris. The façade was dismantled and reassembled in Lille in the 1860s. A second floor surmounted by a clock was added to the original façade. Today, Lille-Flandres is the second busiest station in the Province (France without Paris).

With special mention to

The palace-style station was built for the 1900 Paris exhibition. The Gare d’Orsay was the terminus for the Paris to Orléans line until the 1930s.

In 1986, the building reopened as a popular art museum – the Musée d’Orsay.