New posts
You are at:Home»Blog»Top 10 Most Beautiful Medieval Castles of France

Are you planning a ‘Tour of France’ and want to know which medieval castles are worth a visit? We have selected for you our top 10 most beautiful medieval castles of France. From Alsace to Aquitaine and from Provence to Burgundy, there is so many great castles to discover… and as always it makes it tricky to rank them!

Watch a short video presentation of the castles of France:

The Medieval Castles of France

Along with Germany and Italy, France is one of these great European countries where you’ll find thousands of medieval castles. Mostly in ruins, the old fortresses are testimonies of the troubled period of the Middle Ages.

From the 9th to the 15th centuries, the regions that make France today were in constant friction with each other.

Think about Alsace, Lorraine and Franche-Comté which were part of the Holy Roman Empire.

For many years the West of France was occupied by the English.

In the vast county of Toulouse the Cathars’ or Albigensians’ movement was cruelly repressed.

The end of the castles of France

With the evolution of weaponry and the birth of the Renaissance in the 15th and 16th centuries, the medieval defensive castles lost their strategic positions. A new era begun with the construction of beautiful residences in the countryside. These new châteaux are found in great numbers in the Loire Valley, but also in the Ile de France region.

What’s the difference between a castle and a chateau?

I felt I should clarify with you what I mean by ‘castle‘… as the English language also use the French word ‘chateau‘!

Well, the word ‘castle‘ finds its origins in Late Old English. From the Anglo-Norman French and Old Northern French word castel. As does château which derives from Old French chastel.

You’ll probably find this interesting as ‘castle‘ and ‘chateau‘ in English does not always share the same meaning. Let me explain first by opening the pages of our [online]dictionary! 🙂

The definition of ‘castle’ in English

The online dictionary gives the following definition of the word ‘castle‘ used in the English language:

The definition of ‘chateau’ in English

In turn, here’s what the dictionary say about the use of the word ‘chateau’ in the English language:

So you may ask what is the difference between a castle and a château?

A castle refers to a large fortified building from the Middle-Ages which has many defences. The fortress was often inhabited by a nobleman or king.

In French a castle is translated by ‘un château‘ (notice the circumflex accent!). I know this sounds confusing!

Therefore to the French ‘château‘ has a broader meaning than to the British.

It can refer to:

Castle of France: what about Versailles and the Louvre?

The Palace of Versailles © French Moments

To add to the confusion, the Palace of Versailles is not considered a ‘palais‘ in French. It is a ‘château‘!!

The title of palace is used to designate the building of a seat of power located within a city.

Despite its allure, the château de Versailles is ‘a castle‘ because at the time of its construction under the reign of king Louis XIV, it was situated in the countryside.

However, in Paris, the medieval castle of the Louvre became a palais in the 14th century under Charles V. Situated in the city of Paris, the kings of France used it as their main Paris residence.

Castles of France: in order to make things simple! 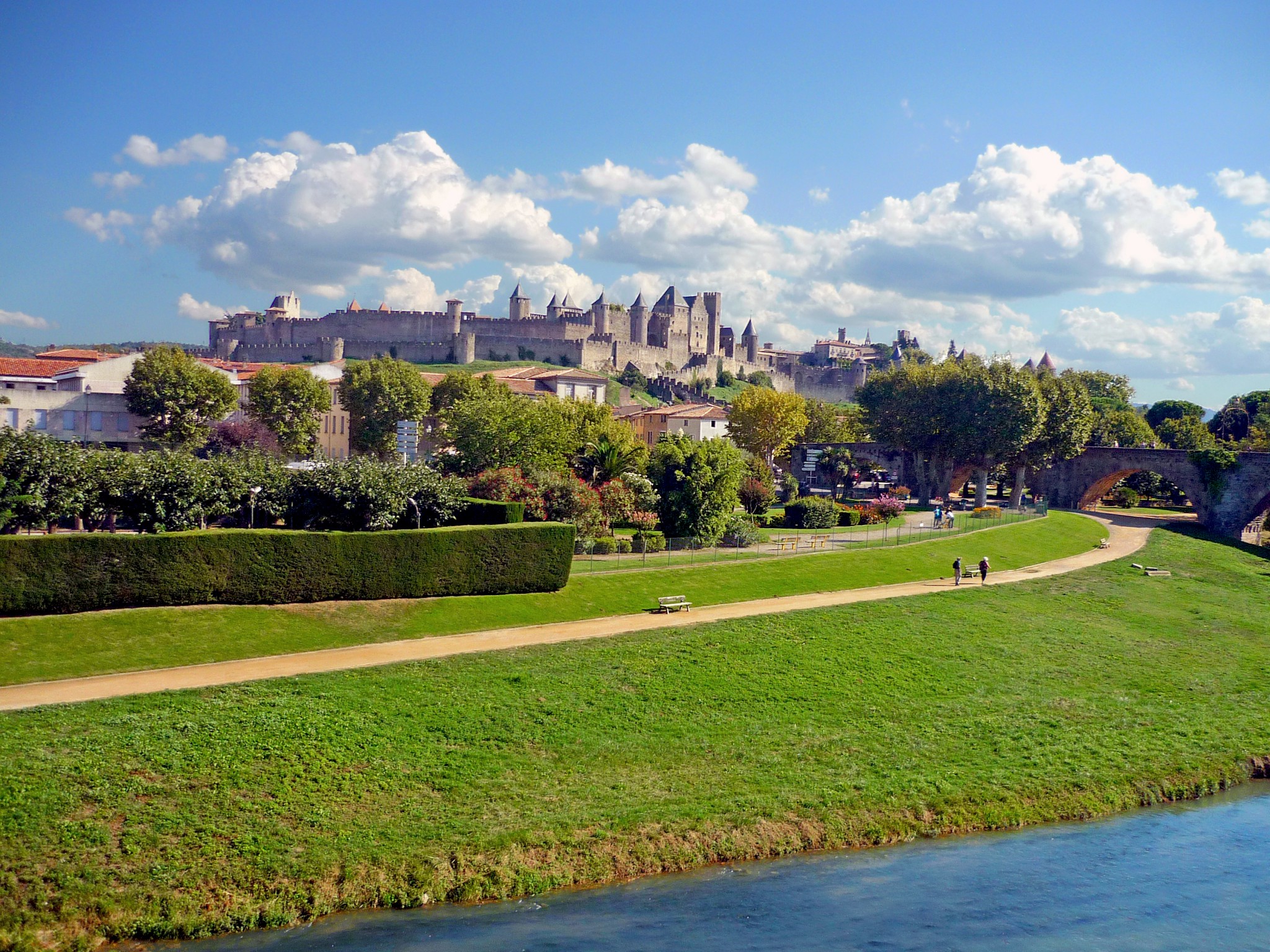 With more than 4 million visitors each year, Carcassonne is among the most prestigious tourist destinations in France, on a par with Mont-Saint-Michel and Paris’ Notre-Dame. A UNESCO World Heritage Site since 1997, Carcassonne is a dramatic representation of medieval architecture perched on a rocky spur that towers above the River Aude, southeast of the new town. 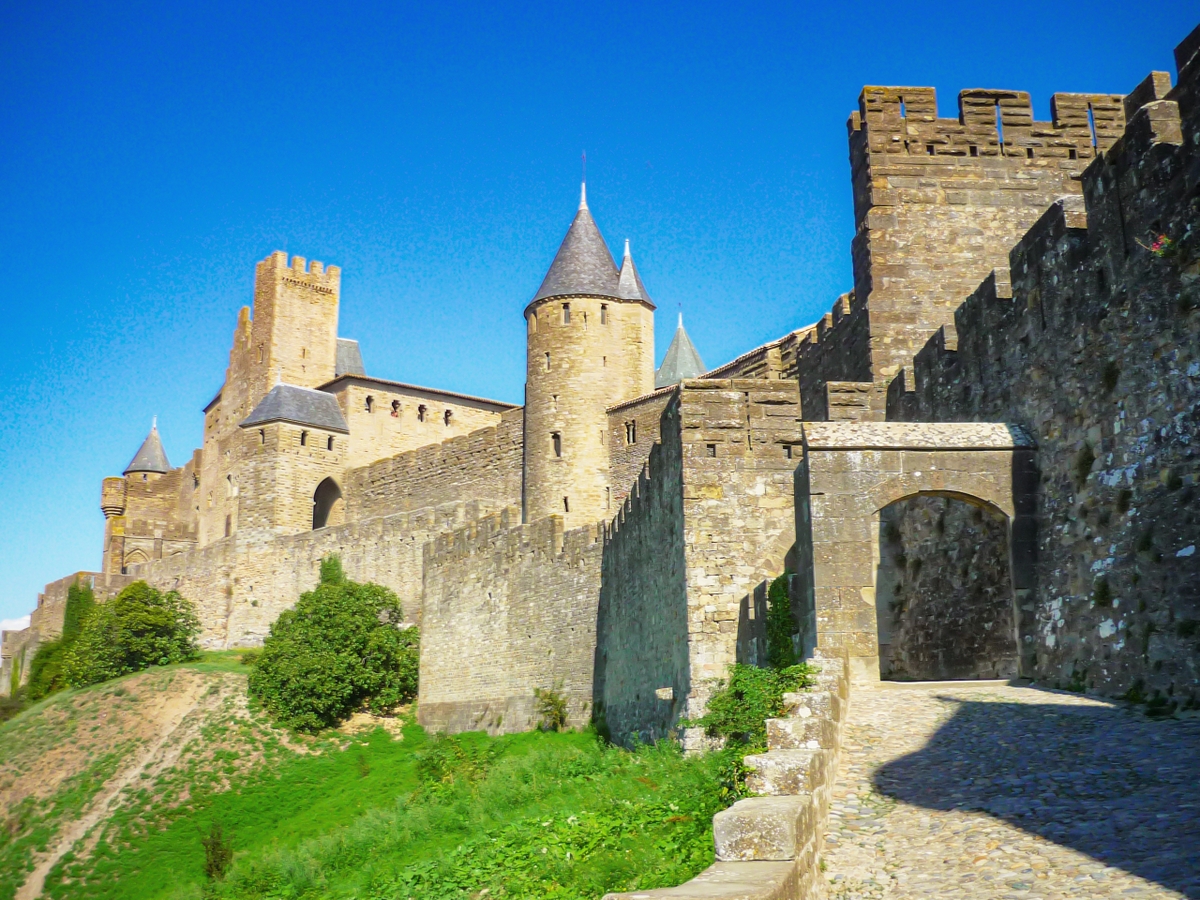 The ramparts of Carcassonne © French Moments

The Cité from above © Chensiyuan – licence [CC BY-SA 4.0] from Wikimedia Commons

>> Get your entrance ticket to the Castle of Carcassonne << 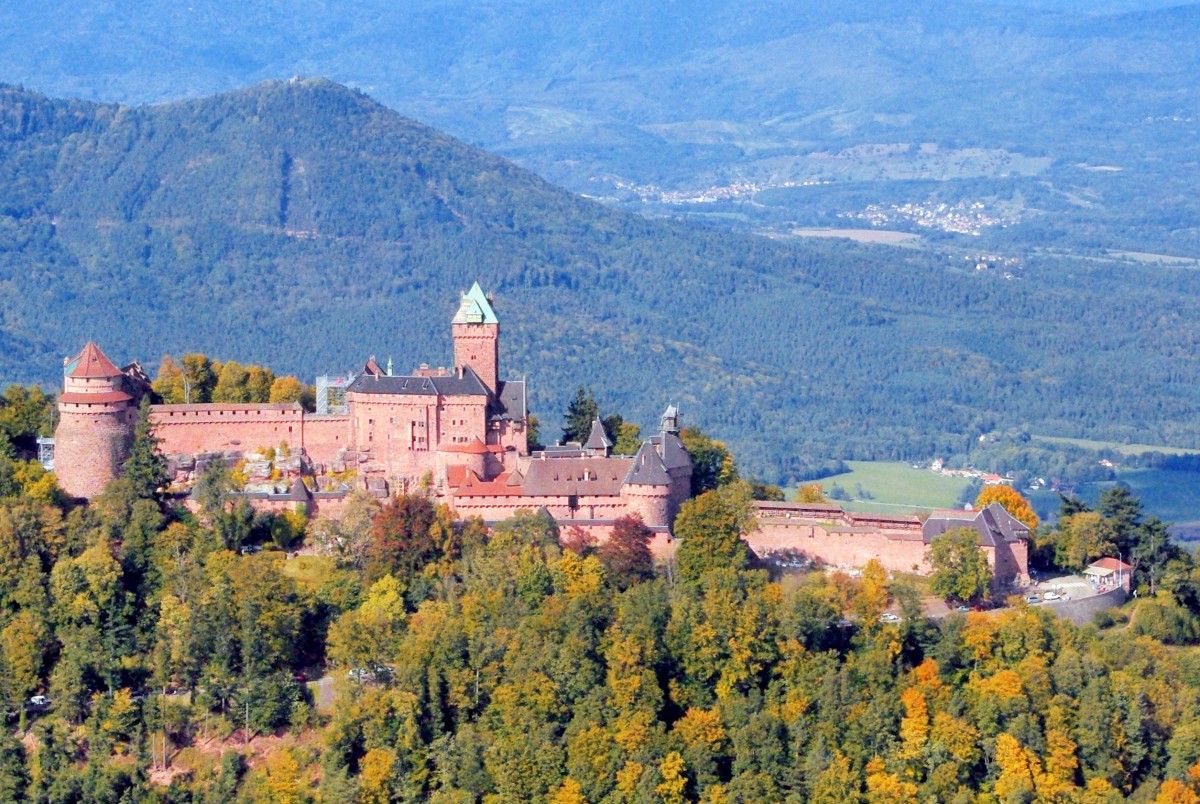 The Haut-Kœnigsbourg castle seen from above © French Moments

At 757 metres high, the Haut-Kœnigsbourg castle dominates the Plain of Alsace. The fortress stands out with its imposing pink sandstone structure.

Ideally situated in the heart of the Alsace Wine Route, the fortified castle offers its visitors a panoramic view over the plain, the Black Forest in Germany and on a fine day, the Swiss Alps. 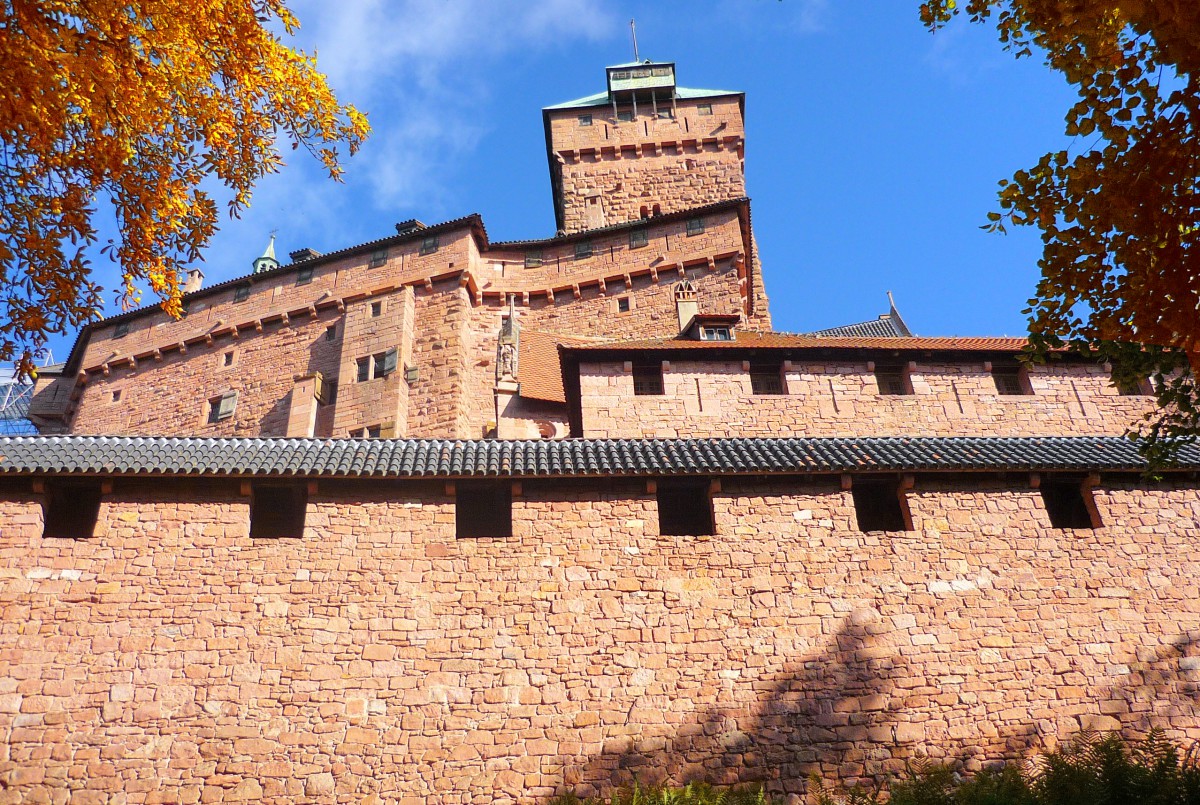 The castle of Haut-Kœnigsbourg © French Moments 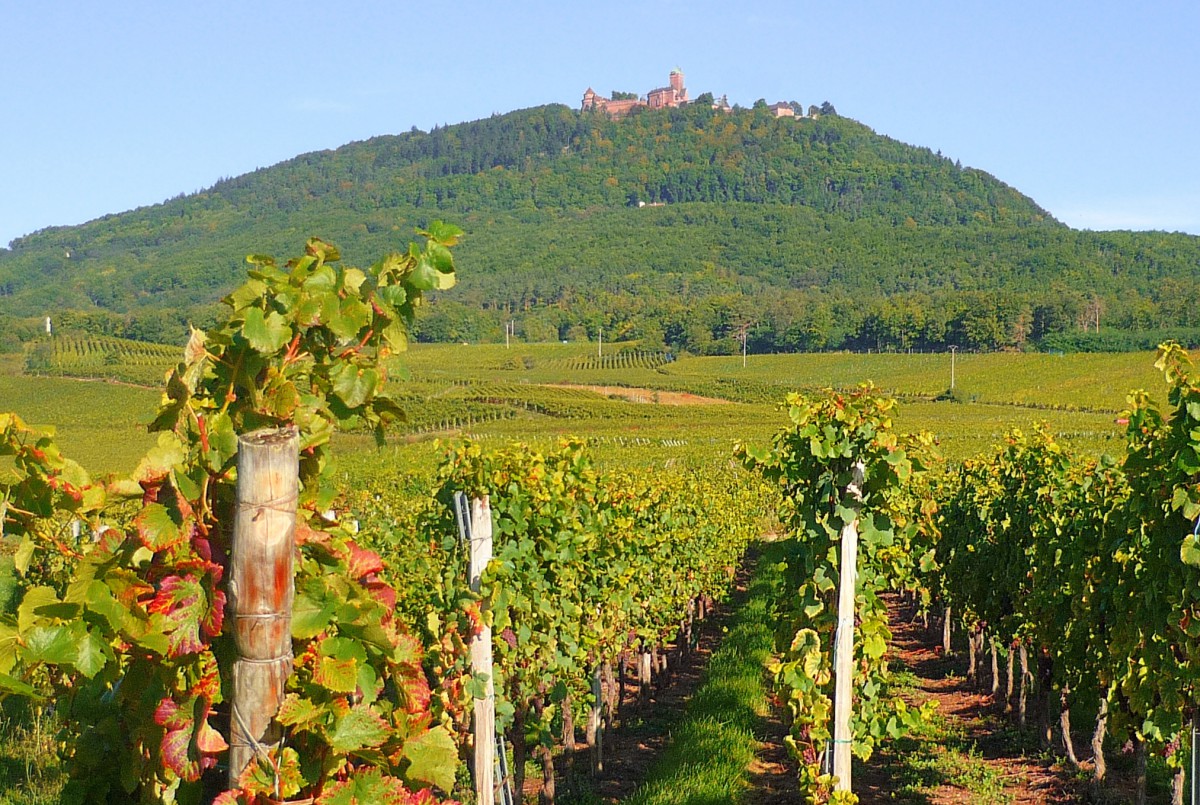 The Haut-Kœnigsbourg castle seen from the vineyard © French Moments

► Read more about the Haut-Kœnigsbourg Castle. 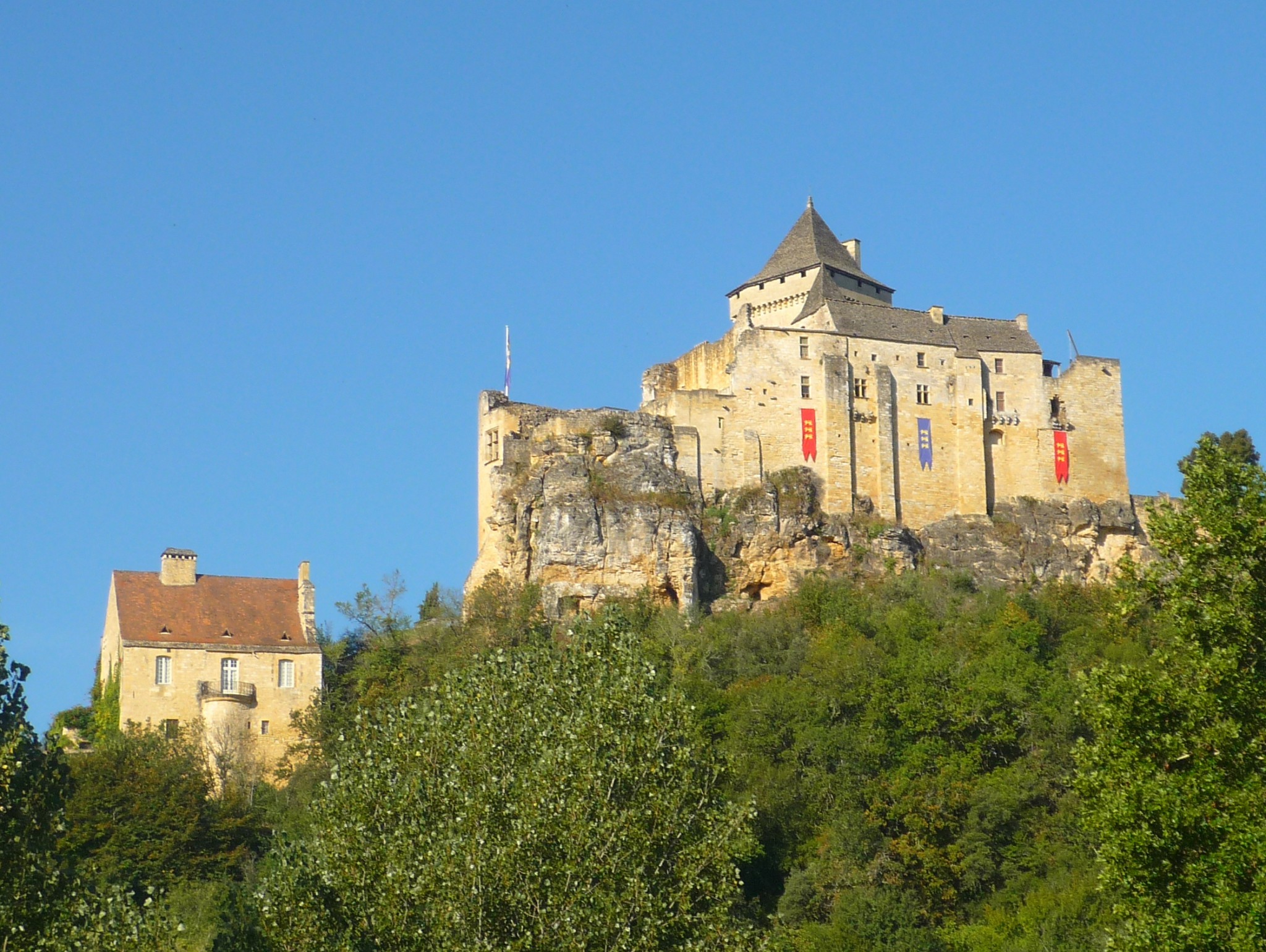 The most visited castle in the South of France dominates the picturesque village of Castelnaud-la-Chapelle on the left bank of the Dordogne River.

During the Middle-Ages, this mighty English fortress commanded the strategic position at the confluence of the Dordogne and Céou Rivers, opposite the rival French castle of Beynac. 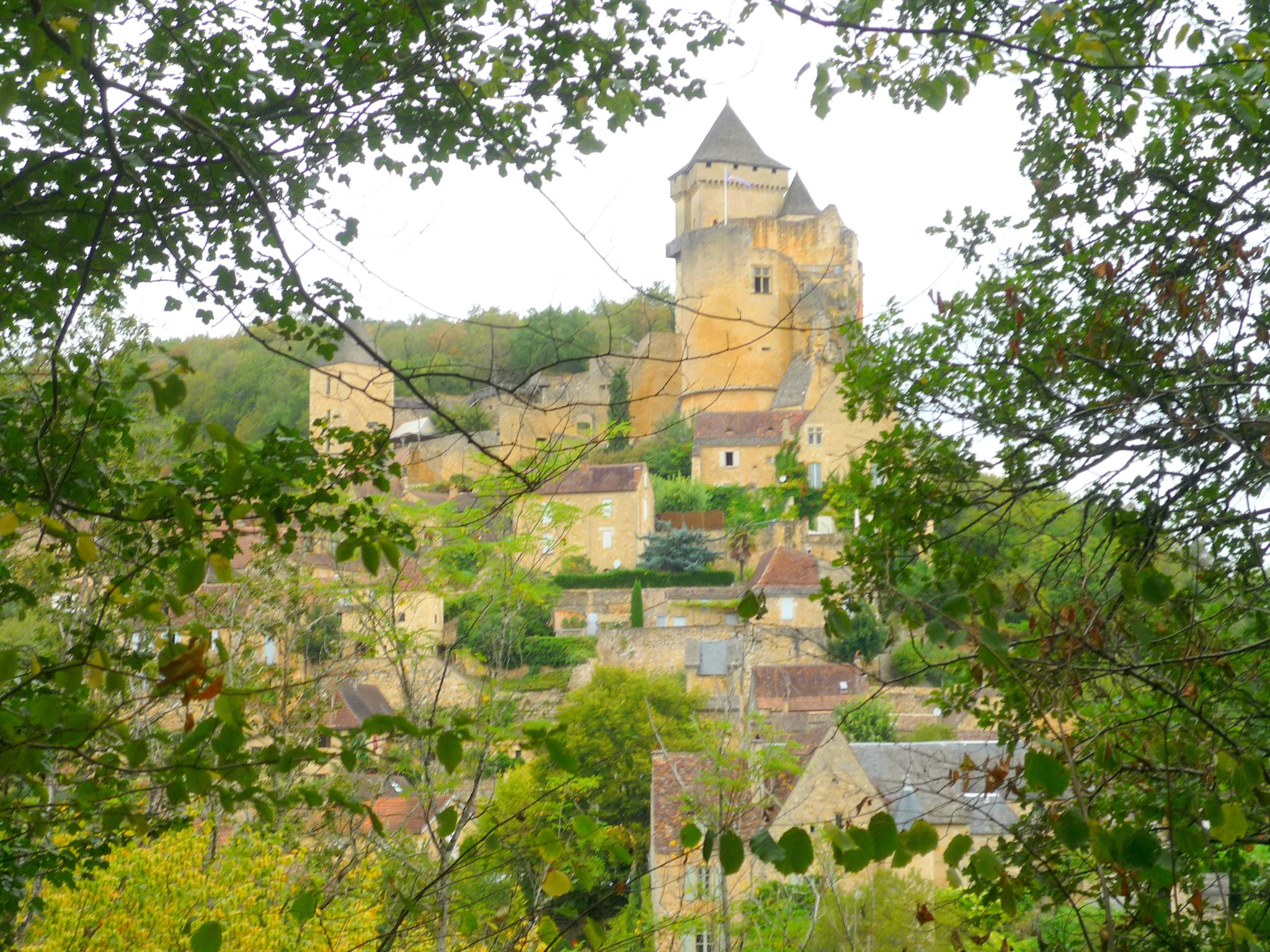 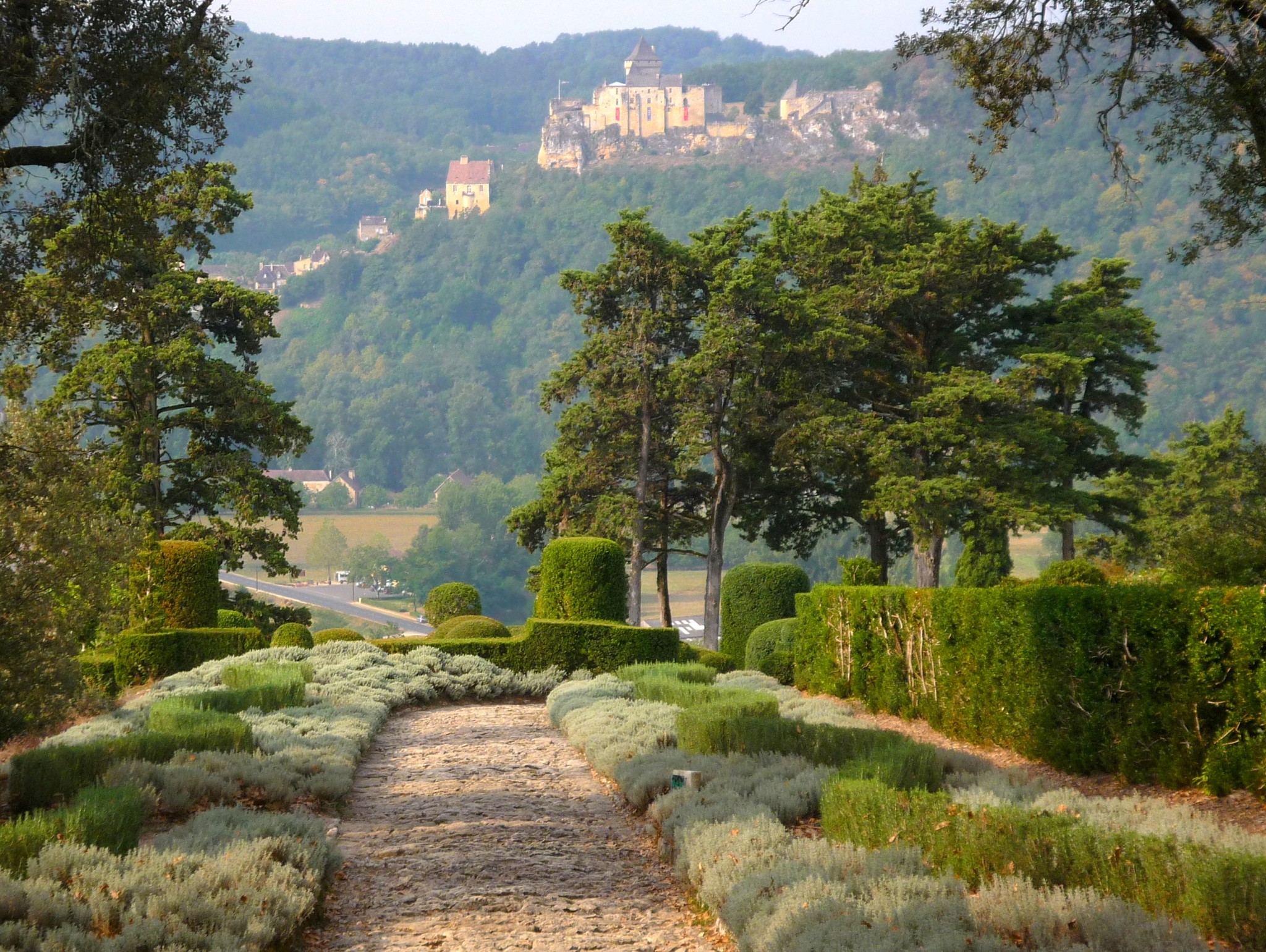 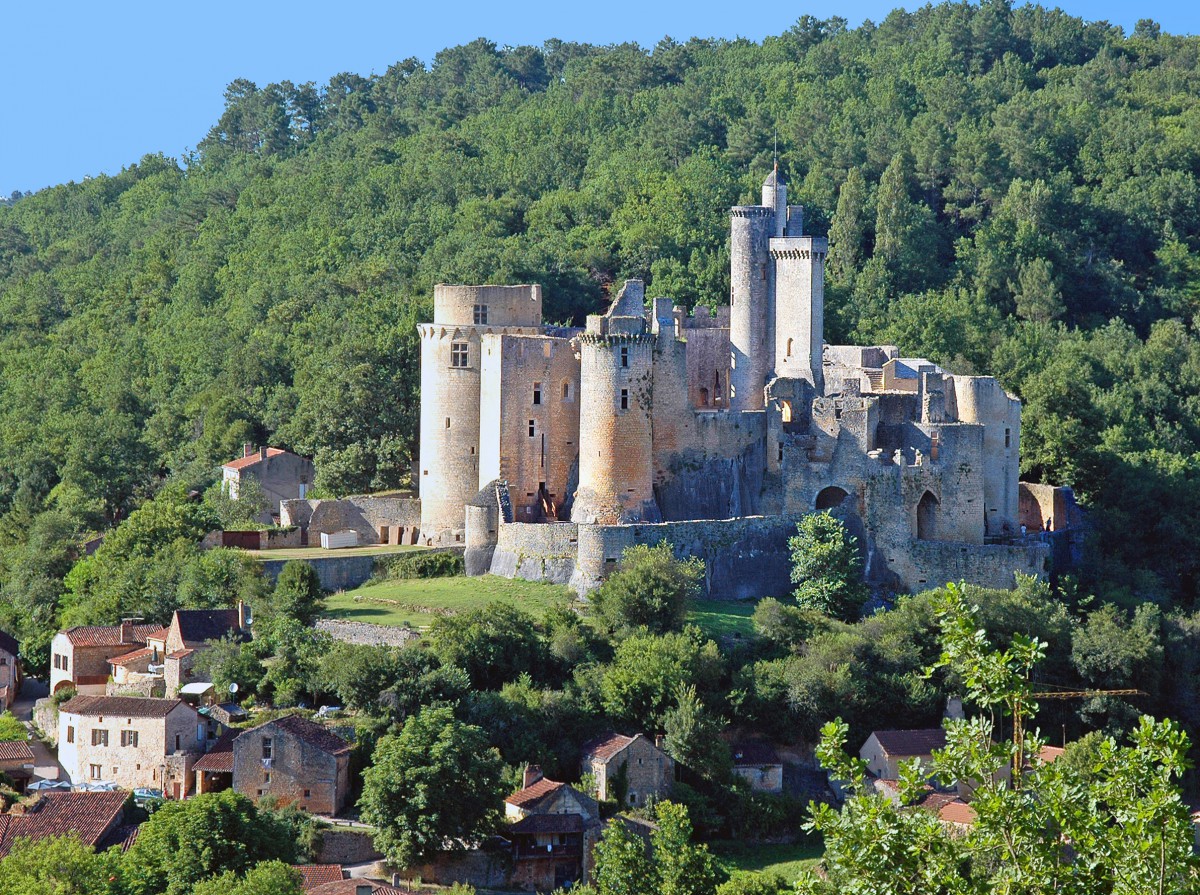 The military fortress of Bonaguil is located on a rocky spur between the valleys of the Thèze and Lémance Rivers to the far south of the Dordogne départment.

Bonaguil was the last of the fortified castles built in France. It was entirely refurbished between 1480 and 1510 to incorporate the latest defensive systems of the late Middle-Ages. For this reason, it was never attacked and was only ever used as a residence by its owners.

Peyrepertuse is one of the famous Cathar castles, located in the Corbières region of the Aude département.

Perched on a crest at 800m high, its strategic position made it an important and coveted fortress along the former French/Spanish border.

The imposing castle of Pierrefonds, located 80 km to the north-east of Paris, sits enchantingly around a bend in the road beside the Compiègne Forest.

Built in the 12th century, the castle was destroyed in the 17th century then completely restored by the architect Viollet-le-Duc under the direction of Napoleon III.

This unusual reconstruction, often criticised, resulted in a grandiose architectural ensemble, making Pierrefonds a medieval as well as a modern 19th century castle. For this, Pierrefonds is known as “the romantic folly of the Emperor”. The castle of Loches in the Loire Valley, was built at the beginning of the 11th century on a hill above the town.

Fulk III, Count of Anjou, ordered the construction of a high keep. The square tower is 36 metre high. Construction started in 987 and ended in 1040. The castle was one of King Charles VII’s residences who gave it to his mistress, Agnès Sorel.

The castle of Fougères in Brittany is one of France’s most imposing castles. Its grounds cover two hectares surrounded by three well-preserved walls flanked by 13 towers. The castle has been built on a naturally protected site away from the surrounding swamp.

Set above Les Baux-de-Provence sits the “Citadelle des Baux”, the ruined castle of the village. The fortress is hardly distinguishable from the edge of the plateau on which it was built.

It still features remnants of its turbulent past: the dominating keep, the Saracen tower (taking its name from the Saracen raiders who came from the South), and the Paravelle tower (used as a lookout). A difficult stairway gives access to the keep. The view from its top is one of the most impressive in all of Provence. 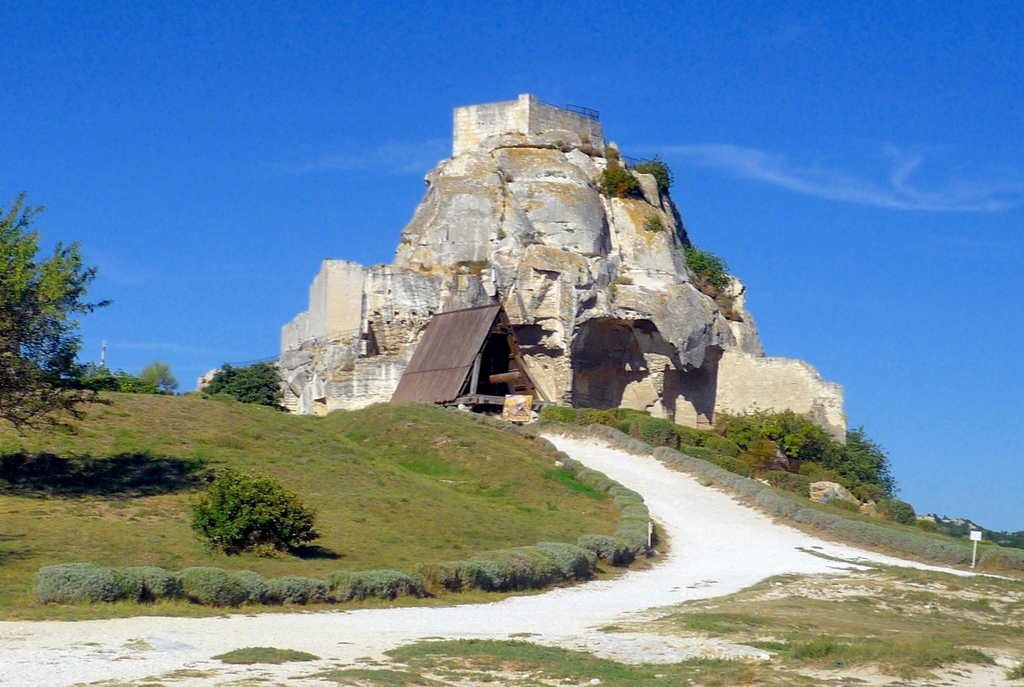 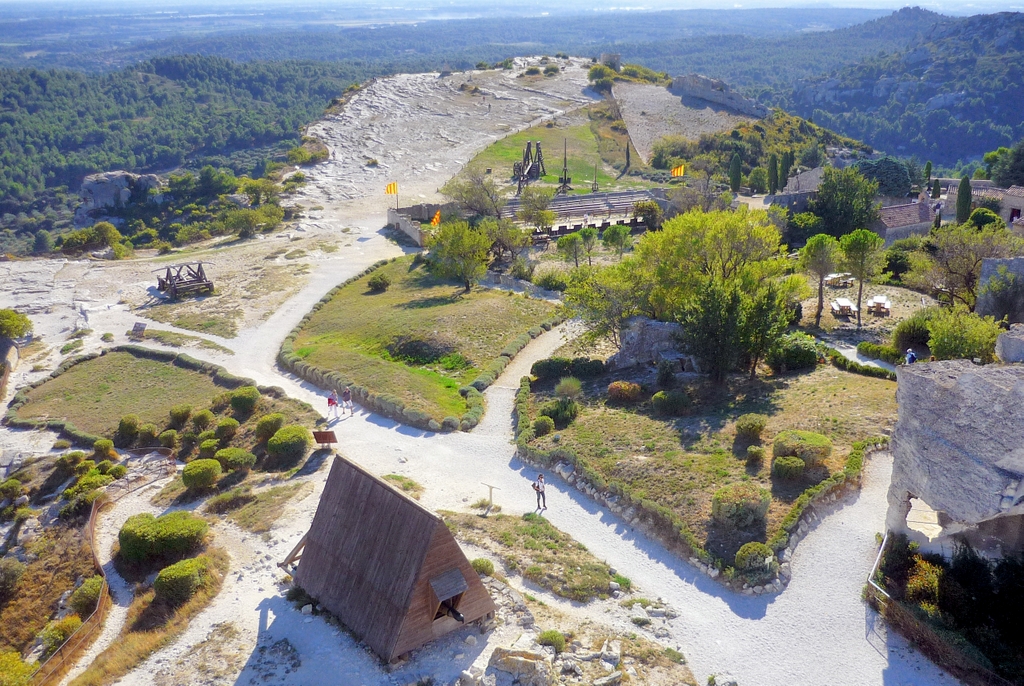 The fantastic view from the Saracen Tower © French Moments

► Read more about the castle of Les Baux. 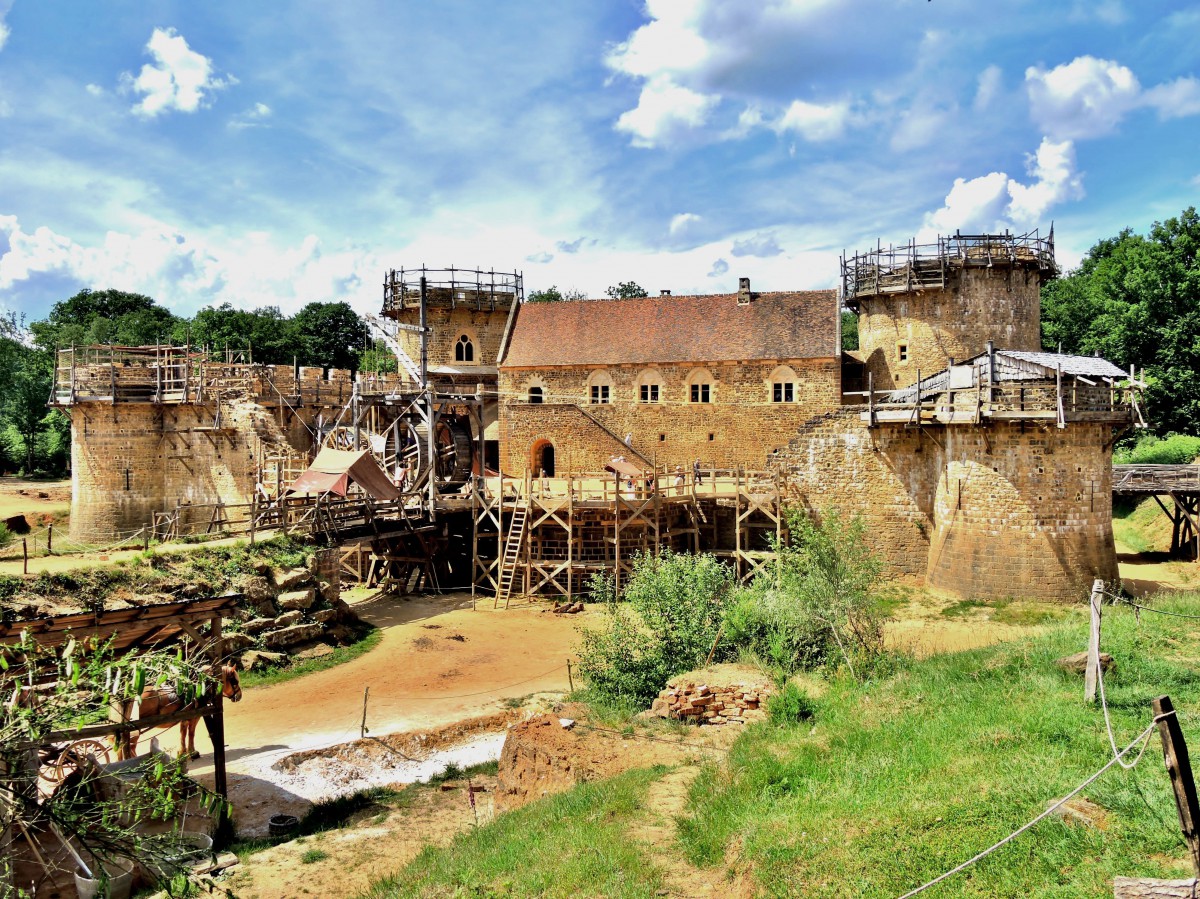 In the heart of Burgundy, Guédelon is not a historic castle as such for it is more like an open history book.

When construction started in 1997, the long-term goal was to build a fortified castle by using techniques and materials from the Middle Ages.

The project has proved a success, as it has created 55 jobs and welcomed more than 300,000 visitors each year. Guédelon should be completed in 2022 and will then look like a 13th century medieval castle.

More castles of France to discover!

To be honest, a list of only 10 castles of France does not pay tribute to all the beautiful fortresses found in the country. Here is a list of other castles worth exploring on your visit to France. If you know some great French castles and fortresses to see and/or visit that are not listed in the article, please share their names by commenting below! 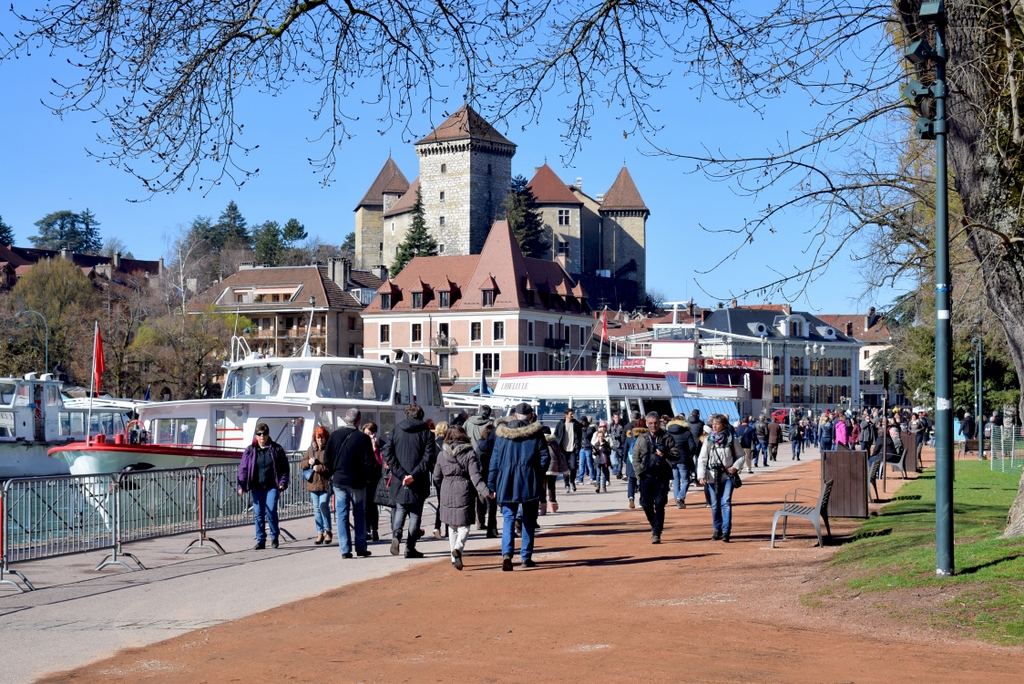 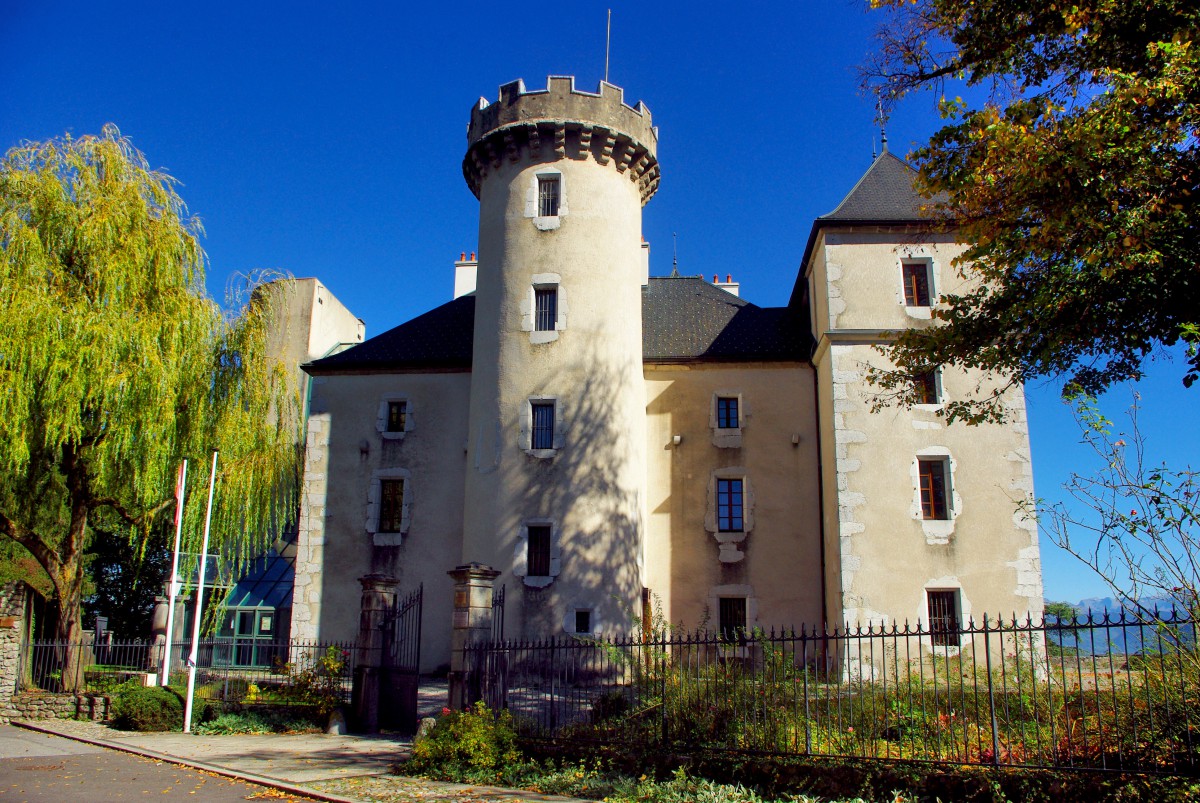 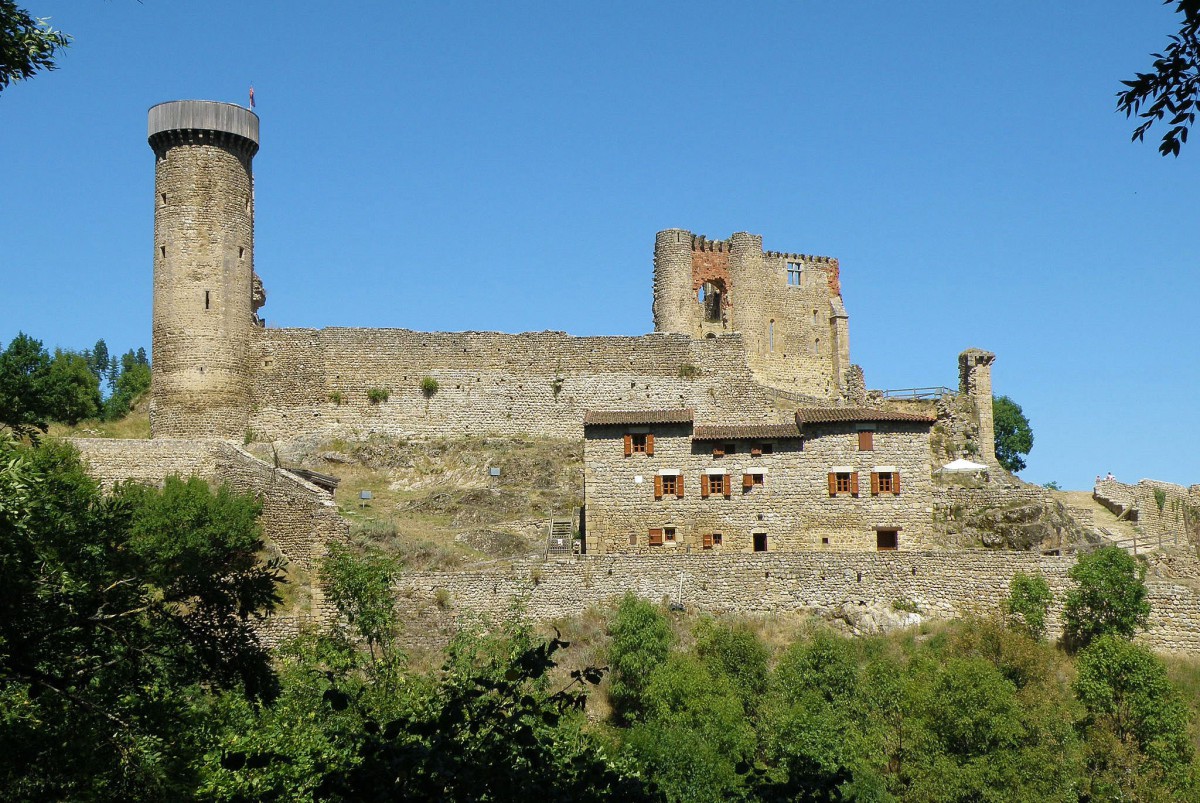 Castle of La Roche in the Gorges of the Loire © Michael Boudoux – licence [CC BY 3.0] from Wikimedia Commons

The castle of La Rochepot from the D33 road © French Moments 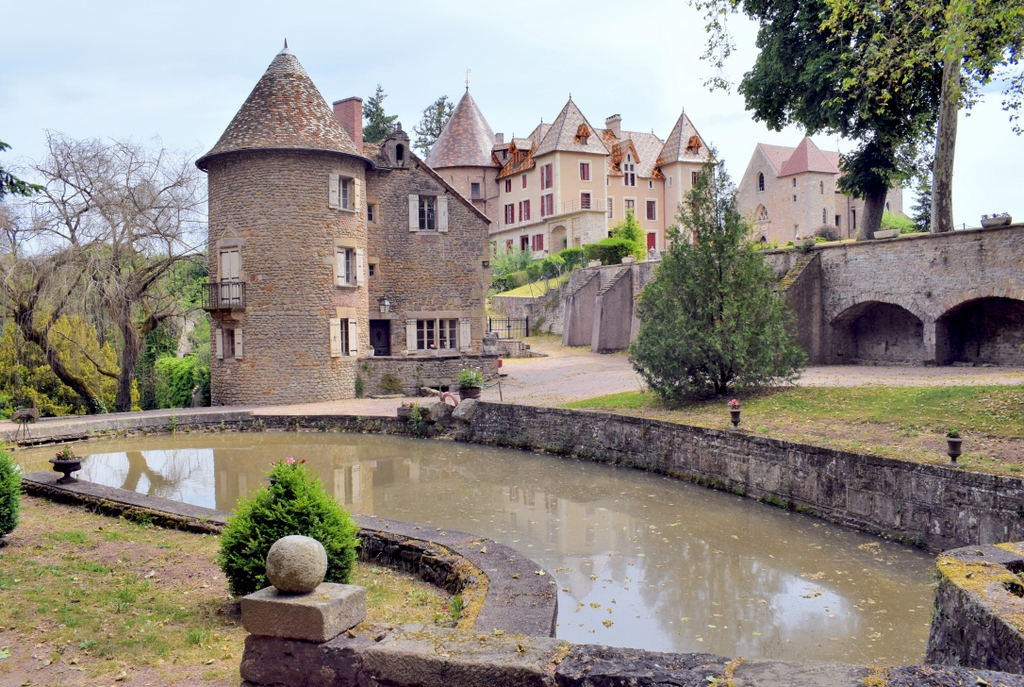 The Castle of Couches © French Moments 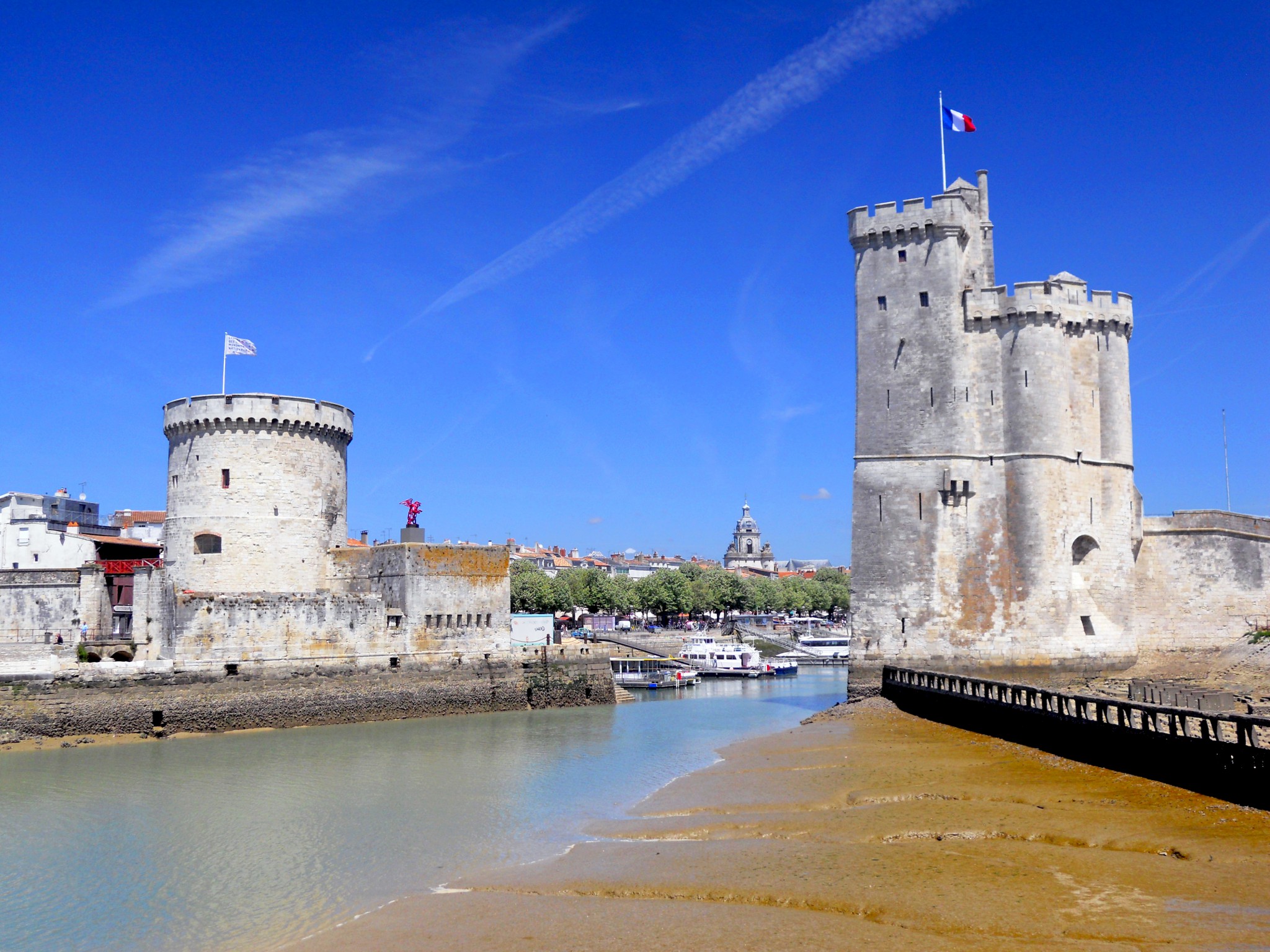 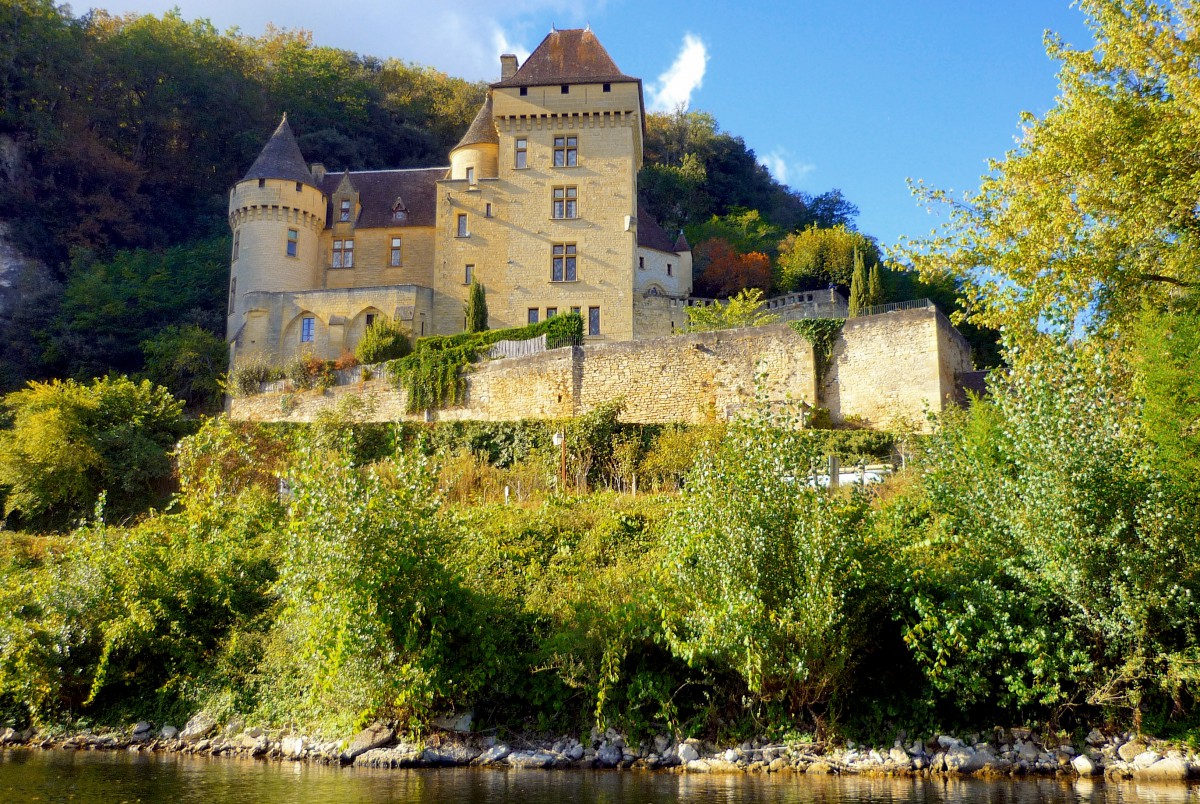 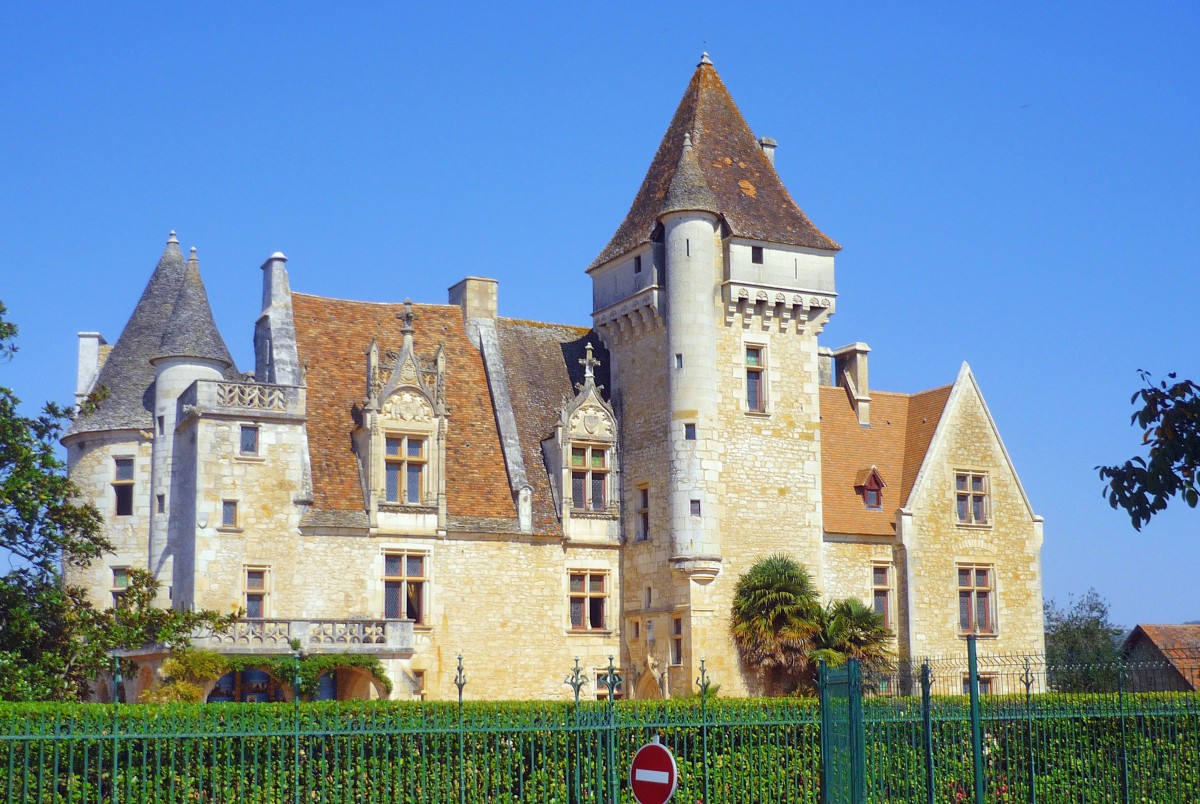 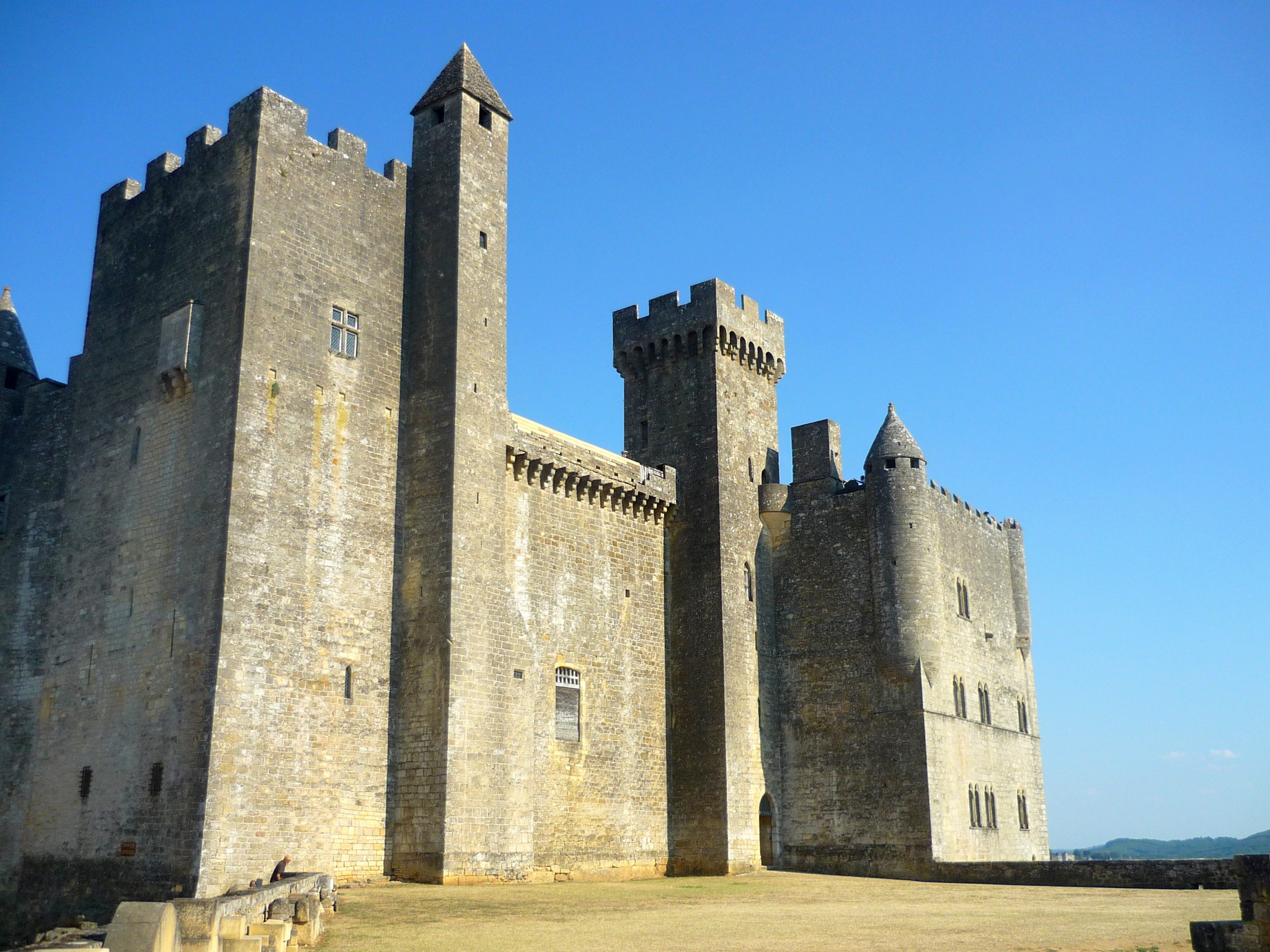 The castle of Beynac in Périgord Noir © French Moments 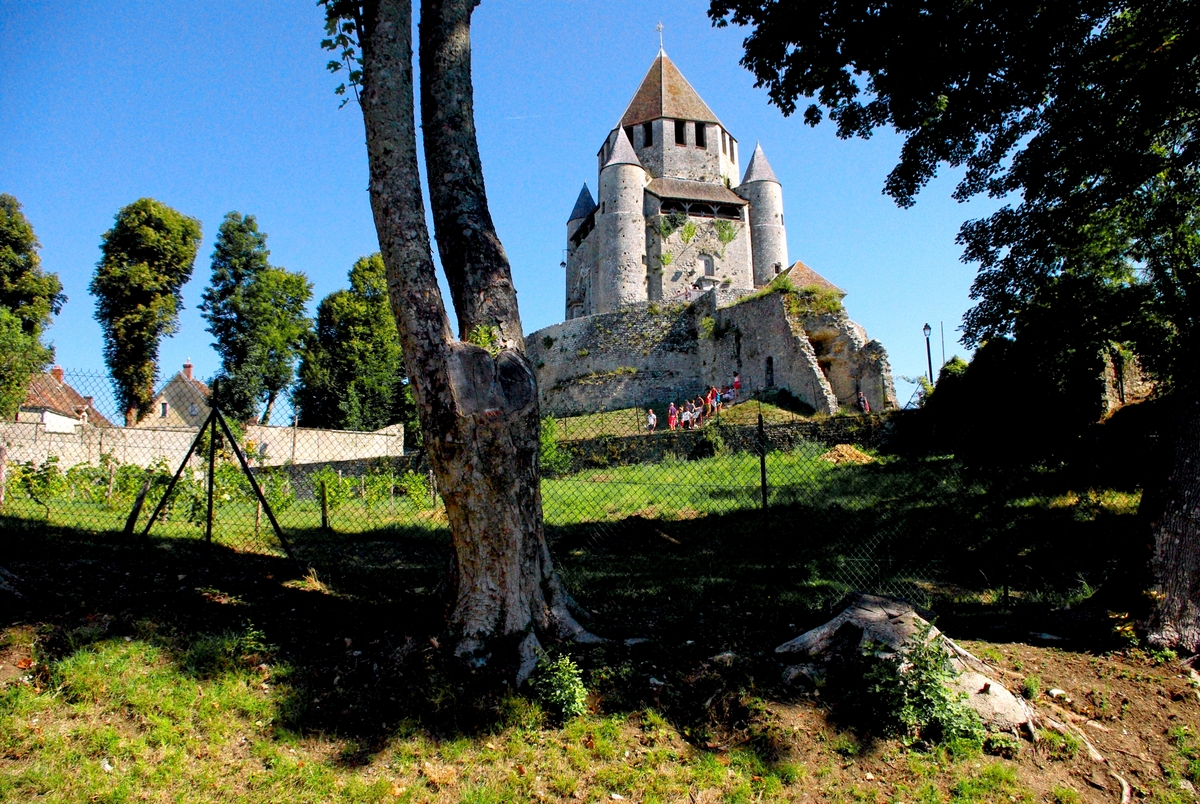 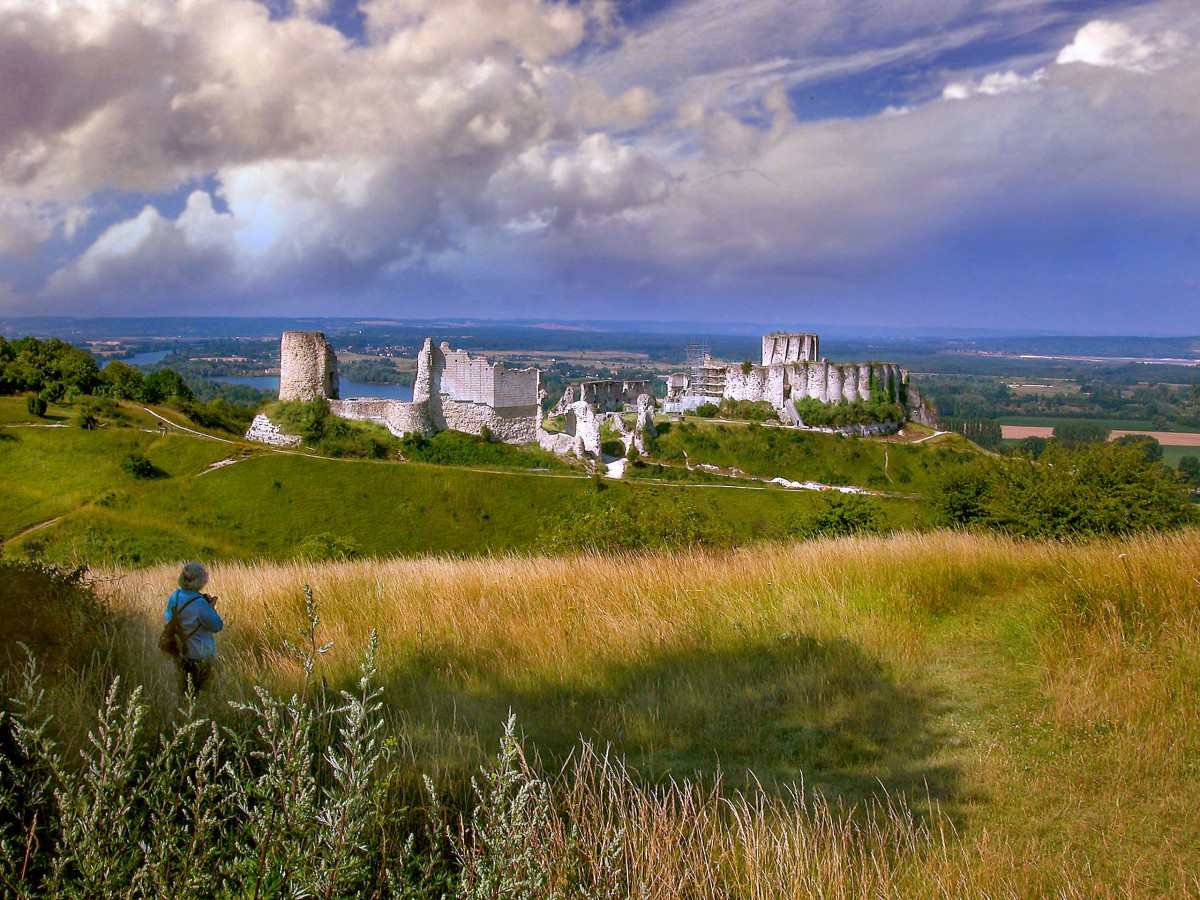 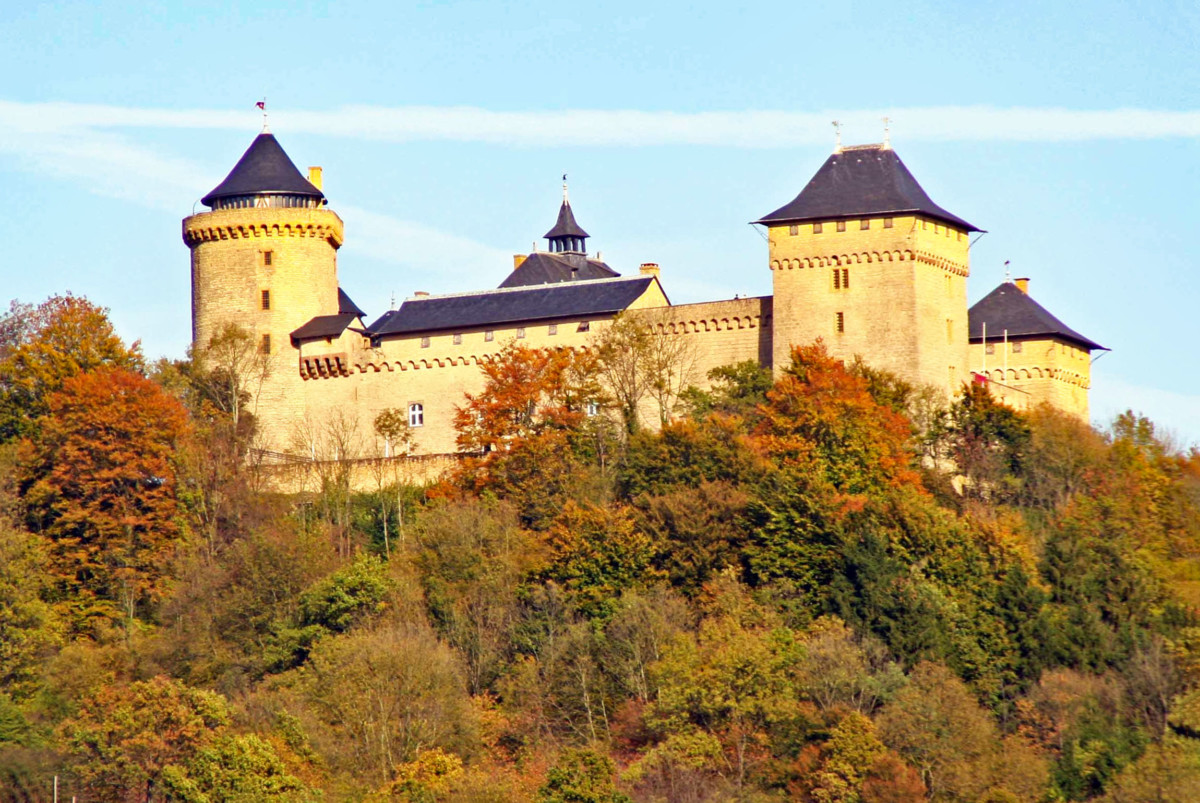 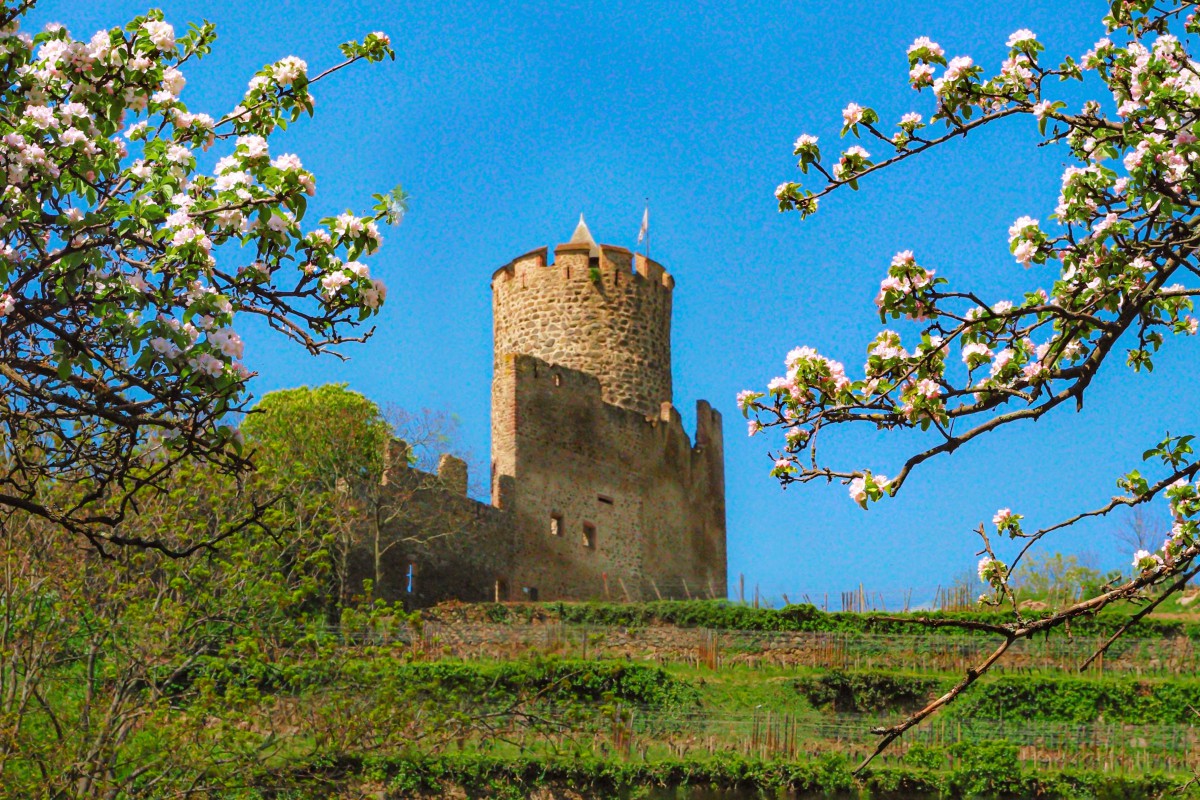 The castle of Kaysersberg © French Moments

The castle of Menthon near Annecy (French Alps) © French Moments

Castles of France: find out more!

Castles of France: Pin it for later 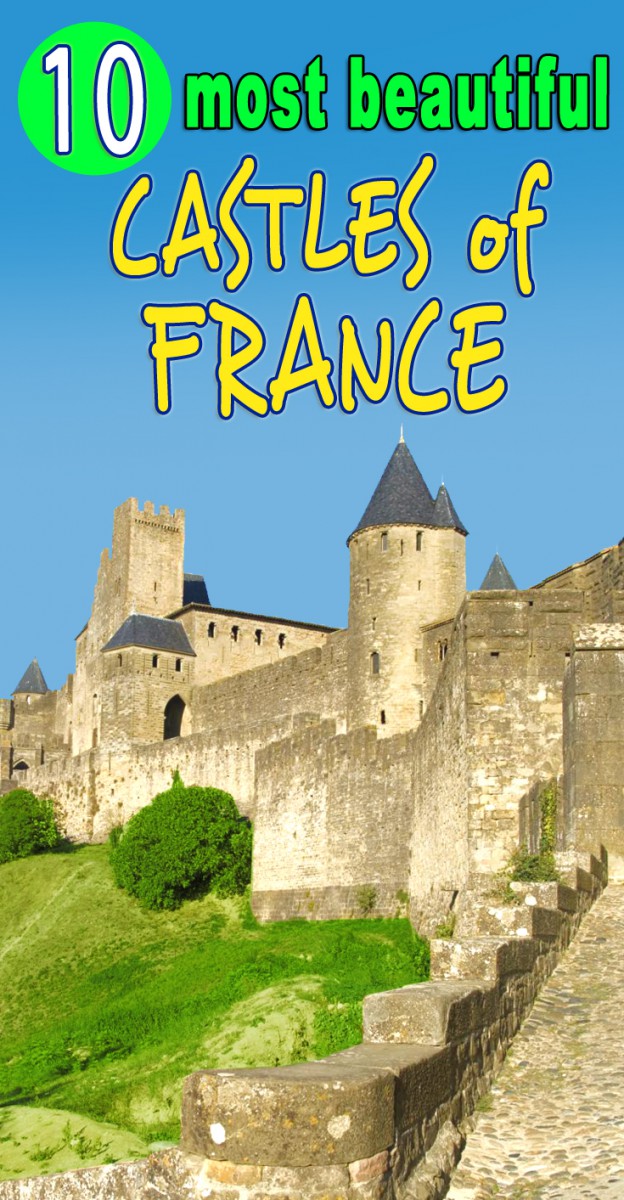 If there are other French castles and fortresses worth seeing that are not listed above, please share their names and locations by commenting below!