La Turbie and the Trophy of Augustus

La Turbie and the Trophy of Augustus

La Turbie brings back fond memories of my childhood. I had a great interest in Roman ruins and the visit to the Trophy of Augustus really impressed me. The monumental commemorative structure stands above the Principality of Monaco. Since the times of Roman Emperor Augustus, the monument has stayed a symbol of the dominating power of Rome in Gallia Narbonensis (today’s Provence and Languedoc).

Plan your trip to La Turbie and the region of Nice!

Where is La Turbie and the Trophy of Augustus?

The Tropaeum Alpium (in French: Trophée des Alpes) majestically stands in the commune of La Turbie on the French Riviera. It overlooks the Principality of Monaco and lies 7 km from the hilltop village of Èze and 16 km from Nice. 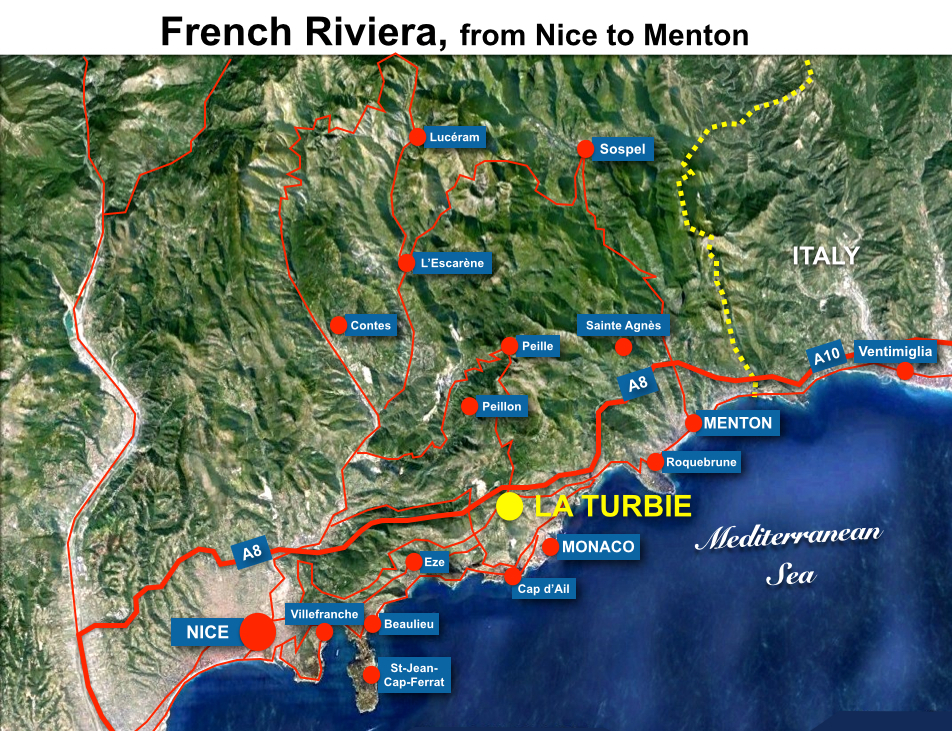 Due to its gigantic dimensions, you can see the Trophy of Augustus from many viewpoints in the surroundings: La Turbie and Monaco.

You can reach La Turbie with the scenic Grande Corniche road that links Nice to Menton.

The Trophy of Augustus: a bit of history

Waging war in the Alps

A great number of local tribes obstructed the passage of merchants through the mountain passes of the Alps. Their controls and impediment on trade were unacceptable for the Roman Empire which engaged in a long war with the rebellious 44 tribes. The military campaign against the tribes lasted between 16 and 7 BC.

The submission of the Alpine people to the authority of Rome made possible the extension of the Via Aurelia (Rome to Pisa) with the construction of the Via Julia Augusta in 14 BC.

The Romans had the Trophy of Augustus built on the Via Julia Augusta which was of strategic importance for it linked Rome with many towns situated on the French Riviera, in Provence, Spain and Northern Gaul.

It was Roman emperor Augustus who commissioned the monument to assert and celebrate his definitive victory over the peoples of the Alps.

Neither a mausoleum nor a military structure, this notable artefact of the dominating power of Romans was built in 6 BC on a ridge of the mountain at a mansio called Alpis Summa (Alpine Summit). At completion, it used to mark the boundary between Italy and Gallia Narbonensis (which would later be pushed westward to the River Var).

Monuments of this kind were raised throughout the Roman Empire to honour Roman victories. They were often set up on borders or former battlefields. The Tropaeum Alpium in La Turbie also affirmed a strong political message of Romanisation upon the conquered territories.

The 8th Wonder of the World!

Also of large proportions, the monument’s remains are only a small part of the original structure.

Its circumference was 33 metres. The stones used for its construction were made of white limestone from a local quarry situated only 500 metres away.

Reconstitution of the monument in today’s La Turbie

Below is a photo montage showing what the original monument would look like today:

The monument could well have become the eighth wonder of the ancient world.

The names of the subdued tribes

The names of the tribes subdued by the Romans were shown on its base. Pliny the Elder recorded the full mention:

“To the emperor Augustus, son of the deified [Julius Caesar], Pontifex Maximus, in the 14th year of [his] Imperial command (and the 17th of [his] tribunician power, the Roman Senate and people [dedicate this] because under his leadership and auspices, all the Alpine peoples, from the Upper Sea to the Lower Sea [ie from the Adriatic to the Tyrrhenian], were submitted to the authority of the Roman People“.

Then followed a long list of 45 Alpine tribes overcome by the Romans that occupied the province later called ‘The Maritime Alps’.

A monument in ruins

At the fall of the Roman Empire in the 5th century, the monument was often damaged by invaders such as the Visigoths and the Vandals.

During the Merovingian era, the Trophy was not much considered by the Christian authorities of the time who viewed it as a Pagan heritage. Its statues were consequently destroyed by the monks of Lérins Abbey.

During the Middle Ages, the monument lay in the territory of the House of Savoy and served as a fortress with houses flanked by the surrounding wall.

During the War of the Spanish Succession, France declared war on the House of Savoy. When the French troops invaded the County of Nice, Louis XIV gave an order to dismantle the Tropaeum Alpium, as were other castles and fortresses in the region (Nice, Èze, Sainte-Agnès). The stones were later used to build houses in La Turbie and the 18th-century church Saint-Michel.

At the beginning of the 20th century, a team of archaeologists partially restored the monument. From the colonnade that once circled the Trophy, only a few columns remain today, giving the monument its peculiar truncated silhouette. Today its height reaches 35 metres.

There is a museum about the Trophy on the grounds which recalls its history and has a model replica of the original monument.

From there is a superb view of Monaco and the Mediterranean Sea.

The imposing monument to the glory of Augustus and to the power of Rome is the only structure of its kind still standing today in Western Europe.

The Greek word “tropaion” and Latin “tropaeum” gave the English word “trophy” and the French word “trophée” (of masculine gender).

The old village of La Turbie

The centre of La Turbie is often bypassed by tourists although it is quite an interesting village to visit.

The medieval village is relatively small but well preserved.

You can enter it through several streets. I advise you to go through one of the three gates cut into the medieval wall:

Take a stroll through the maze of small cobbled streets of the medieval village. You will discover beautiful stone houses with flowers, arched passageways, and refreshing little fountains, not forgetting the exotic plants and bougainvillaeas that remind us that we are indeed on the French Riviera.

On the small Place Saint-Jean, discover the beautiful classical façade of the chapel of the white penitents or chapel Saint-Jean-Baptiste (18th century).

The church of Saint-Michel

The baroque church of Saint-Michel dates from 1764. It was built outside the medieval ramparts presumably with stones from the Trophy of Augustus.

The monument has a square bell tower with Corinthian pilasters and a dome of glazed tiles.

Inside, the church contains many fine paintings, such as a 15th-century Virgin of the Nice-Brea school.

The nave and chapels, barrel-vaulted on high pilasters, are covered with frescoes and stucco.

Note the 17th-century communion table in onyx and agate and the polychrome marble high altar from the Abbey of Saint-Pons in Nice.

The view from the cemetery

To enjoy a beautiful view of the Trophy of Augustus and the roofs of the village, go up to the cemetery. At the top, you reach the Chemin de la Batterie. It is here that you will enjoy a breathtaking view of Monaco.

The mountains of La Turbie

Situated in the commune of La Turbie, the Tête de Chien (literally “Dog’s Head”) is an iconic mountain dominating Monaco.

Reaching an altitude of 550 m above sea level, the rocky promontory descends abruptly to the coast where lies the Principality of Monaco.

The summit offers a spectacular view reaching from Bordighera in Italy to the Esterel Mountains.

Located in the commune of Peille, Mount Agel is an emblematic summit of the Alps which dominates La Turbie and a whole part of the French Riviera.

From the summit (1151 metres above sea level), the view extends over Monaco and the French communes of Beausoleil, Roquebrune-Cap-Martin and Gorbio.

If you would like to see a view of La Turbie with the sea in the background, climb to the top of the Cime de la Forna (621 m), west of the village. Take the Chemin de la Forna from the Route de Nice (D2564).

You can continue along the path that follows the cornice to the summit of La Simboula (676 m). There is an orientation table with a view of the snow-covered peaks of the Alps to the north, and to the south, the Riviera from Bordighera (Italy) to the Esterel massif.

Just below you will find a very picturesque view of the hilltop village of Eze.