The Gallic rooster is a symbol of France and personifies the early inhabitants of France, the Gauls. France identified herself to the cockerel for its courage, determination and virility when defending the flock.

The Constitution of 1958 does not recognise the Gallic rooster as an official symbol of the French Republic unlike the Tricolour, the Motto and the National Anthem.

The origins of the Gallic Rooster

The rooster or cockerel became an emblem of France.

This occurred in the Middle Ages due to the homonymy of the Latin words gallus (cock, rooster) and Gallus (the inhabitants of Gaul).

At first, the rooster was used by the enemies of France with a touch of derision and mockery.

However, it is the role that the rooster played in the Passion of Jesus-Christ that was retained by medieval France.

As the light conquers darkness and good triumphs over evil, the cry of the rooster is a symbol of victory renewed every morning.

The Bible verses refer to the attitude of alertness and awareness required by Christians waiting for the return of Christ.

The many rooster weathervanes in France

In the 9th century Pope Nicholas I decreed that all churches in Christendom should be topped by a rooster weathervane.

This is a reminder of Peter’s betrayal during the Passion of Christ.

Set on the highest point of towns and villages, the architectural ornament was used for showing the direction of the wind and was visible by the majority of residents.

This explains why from the Early Middle Ages until today a vast majority of French churches have a weathercock at the top of their steeples.

Weathercocks are part of the popular image of rural France along with the village surrounded by fields and woods.

The Gallic Rooster as a French symbol

Between the 16th century and the French Revolution (1789), the Gallic Rooster was occasionally present on coins alongside the effigy of the king.

During the French Revolution, the Gallic rooster was even more present and appeared on the Seal of the Premier Consul.

Napoleon was not much in favour of the rooster emblem, preferring instead the Imperial eagle. The French emperor justified his choice by declaring:

“the rooster has no strength; in no way can it stand as the image of an empire such as France.” 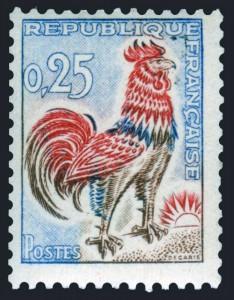 The rooster came back under the July Monarchy and the Second Republic when it was made an official emblem.

Napoleon III disliked the idea of making the rooster the official symbol of the Second Empire and adopted the eagle of his uncle.

The next political regime – the Third Republic – was eager to re-establish the rooster as an official symbol. The animal could be seen on many stamps, embossed on the 20 francs gold coin in 1898 and 1904.

The cock appears in a glorious position on the remarkable gilded gate of the Élysée Palace.

During the First World War, the fierce Gallic rooster was featured against the German Imperial eagle. It was featured in many war memorials across the country.

Today the Gallic rooster is not recognised as an official symbol of the French Republic. However, it is still often used as a mascot by French teams in sporting events (rugby, soccer, basketball).

Other interesting facts about the Gallic Rooster

The late comedian and humorist Coluche once explained why the rooster was a French emblem:

In France, the rooster’s crowing sound is ‘Cocorico’ (for Cock-a-doodle-do). The triumphalist cry is used to demonstrate nationalistic pride for example when a French team is winning a sporting event… or when the economy of France is performing better than England!

The rooster is also the symbol of Wallonia, the French-speaking region of Belgium. The French rooster is known as the ‘singing rooster’ (chanteclair) whilst the Walloon cockerel is depicted raising its claws (coq hardi).

Idiomatic expressions in French about roosters

► Find out more about the Gallic Rooster on France Diplomatie.

Queen Elizabeth II in France: What places did she visit?

What are the roles and powers of the French National Assembly?