The Chauvet cave in southern France has been inscribed on UNESCO’s World Heritage List in June 2014. Located just a short way from the stunning natural stone bridge of the Pont d’Arc in the Ardèche region, the cave contains exceptional prehistoric drawings on the cave walls, as well as prints of human hands and carved art artefacts. The cave is a major site for humanity and provides an exceptional opportunity for studying the Stone Age era.

The Chauvet cave: a bit of history

The Chauvet cave and its drawings were unexpectedly discovered in 1994 by speleologists Jean-Marie Chauvet, Eliette Brunel and Christian Hillaire in pristine condition as the site was sealed off for thousands of years. Located about 25 metres underground, the opening of the cave was closed off by a rockfall some 23,000 years ago. The cave stretches into several branches and rooms underground. The highest room reaches 18 metres.

Since its discovery, access to the cave has been strictly restricted and less than 200 researchers a year are allowed to visit the site.

Situation of the Chauvet cave

The Chauvet cave is situated in the département of Ardèche in the Rhône-Alpes region. It is hidden inside a limestone cliff above the former bed of the Ardèche River. The cave is one of many found along the spectacular Ardèche Gorges. 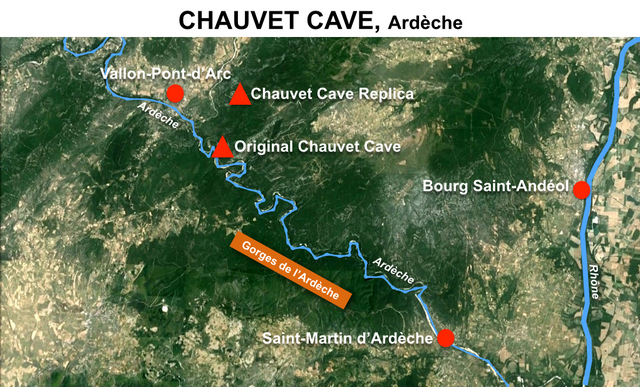 Description of the Chauvet cave

The immense natural cathedral of the Chauvet cave shows three characteristics that are rarely seen together: its age (it is much older than Lascaux), its great state of preservation, and its wealth.

The human drawings date to around 30,000-36,000 years ago and are believed to be among the oldest known in the world. Experts at UNESCO claim that the cave ‘contains the earliest and best-preserved expressions of artistic creation of the Aurignacian people, which are also the earliest known figurative drawings in the world‘.

They are more than 1,000 images inventoried on its wall covering over 8,500 square metres. The drawings include a bestiary of 424 animals and 14 species depicted over a distance of half a kilometre: aurochs, bears, bisons, ibex, lions, mammoths, rhinos, snow panthers, stags, and wild cats.

Some amazing painted scenes include a seven-metre long panel of horses, a panel depicting a group of lionesses out hunting amidst a vast animal composition, naturalistic scenes in which two rhinoceroses fight each other and a lioness spurning the advances of a male…

The cave also displays prints of human hands and other man-made representation which are the proof that Stone Age man made great art. The artists were gifted with the mastery of perspective and made use of overhangs, hollows, niches and alcoves in the rock to give relief.

It is believed that the Chauvet cave was never permanently inhabited by men ‘but was instead of a sacred character‘ and ‘used for shamanist ritual practice’.

In order to avoid the mistakes made in the past at the Lascaux cave where the admission of a large number of visitors led to the growth of mould damaging the prehistoric paintings, the French authorities built a full-scale replica of the Chauvet cave. Designed at the Razal site on the hills of the Vallon-Pont-d’Arc, it is distant of seven kilometres from the Chauvet cave. Completed and opened to the public in the spring of 2015, the replica of the original cave features a full-scale reproduction of frescos made by graphic artists and researchers. Undoubtedly, the new cave is a fascinating multisensory experience to visitors as the temperature and humidity, the silence, darkness and even the smell of the authentic cave have been faithfully reproduced.

The ambitious project is the biggest replica of a prehistoric site in Europe and should welcome between 300,000 and 400,000 visitors from around the world each year.

Covering 29 hectares, the site is set within a vast wooded area and features, alongside the facsimile cave, a discovery centre and a permanent exhibition dedicated to the Aurignacians and wall art, five sheltered interpretation stations, a temporary exhibition space, an educational area for young people, and an events centre.

The Territoire de Belfort: a unique département in France

The Ensisheim meteorite: a divine omen for Austria?