The little town of Thann is situated at the foot of the Vosges mountains and marks the entrance to the Thur Valley which links Alsace to Lorraine via the Bussang Pass. Thann is also the southern gateway to the scenic Alsace Wine Route. During Advent, the Thann Christmas market is themed on a “White Christmas” (Noël Blanc).

At the foot of the St Thiébaut Collegiate, the Christmas Market of Thann features 27 chalets set on two adjacent squares: Place Joffre and Place Saint-Thiébaut.

The stalls sell Christmas decorations and ornaments, local produce and handicrafts from Alsace.

The fir-trees of the Vosges

Around the collegiate a forest of fir-trees, from the 17 villages forming the Association of Municipalities of Thann-Cernay, has been planted.

The Grand Christmas tree of the municipality of Thann stands in the centre of the Christmas market. It is decorated with two kilometres of fairy lights.

The little town of Thann is proud of its beautiful Gothic church whose spire reaches a height of 76 metres.

The stunning roof is covered with multicoloured glazed tiles similar to those found in Burgundy.

The great portal of the Saint-Theobald Collegiate (Collégiale Saint-Thiébaut) is illuminated every night during Advent. The three tympana contain up to 500 characters featuring 150 different biblical scenes.

On two Sundays in December, Santa climbs down the bell tower of the Collegiate and gives away sweets to the children. Called “Le Père Noël escaladeur“, this is the only place in Alsace where Santa abseils from the top of a church accompanied by his elves.

Find out more about Thann Collegiate. 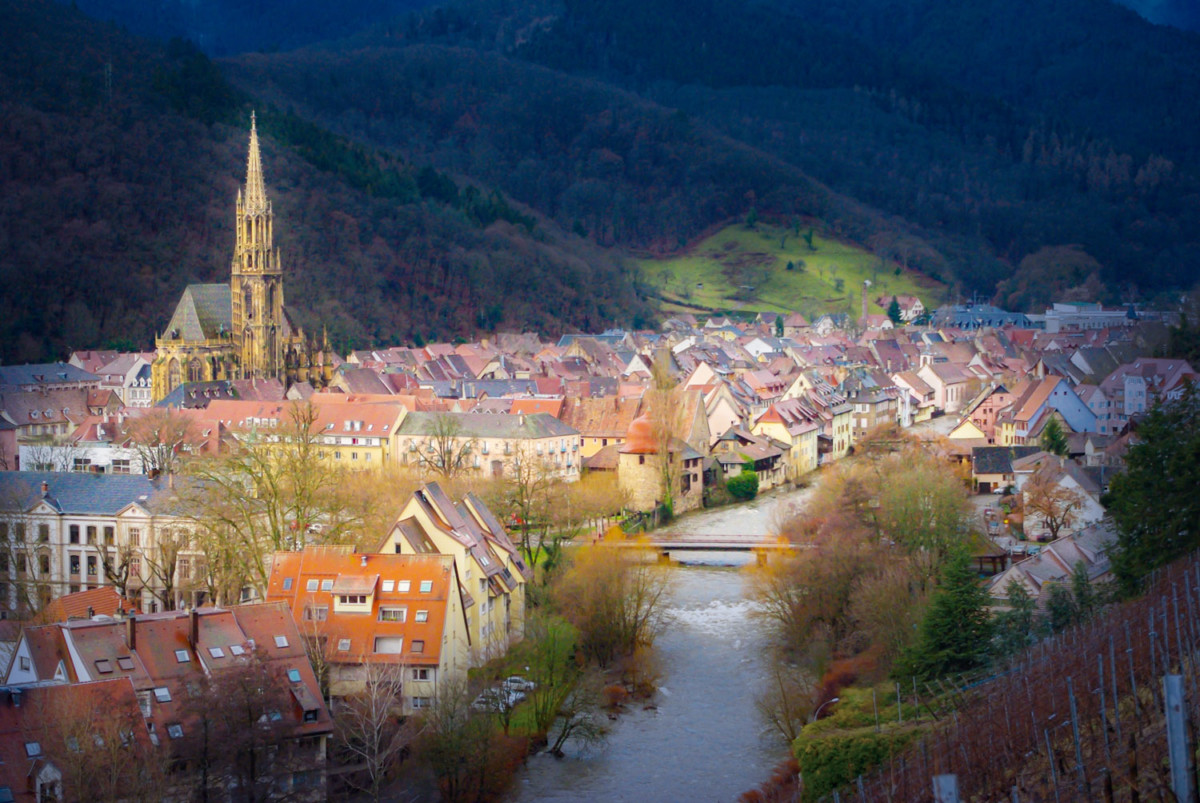 General view of Thann from the Rangen vineyards © French Moments

Thann is a historic town renowned for its Gothic church and the vines growing on the slopes of the Rangen mountain. The town used to be an Austrian stronghold until 1648, commanding access to the Duchy of Lorraine through the Col du Bussang.

The old town of Thann is worth a visit with its stoned houses which differ greatly in style from the half-timbered ones seen along the Alsace Wine Route from Rouffach and further north.

Above the town, perched high on a mountain, lie the ruins of Thann’s feudal castle, the Engelbourg Castle, also locally nicknamed the Witch’s Eye (l’œil de la Sorcière). When Louis XIV ordered that it be pulled down, one of its towers fell and overturned in such a way that it formed a large stone ring that has been kept in that form, standing oddly amidst the ruins.

In the Old town of Thann © French Moments

Find out more about Thann and the Alsace Wine Route.

How to get to Thann

Thann is situated on the Mulhouse-Kruth train line.

Trams run several times a day to and from Mulhouse central station (30 minutes) with train connections to Colmar, Strasbourg, Lyon, Basel and Paris.

Situated at the crossroads of two major axes (Strasbourg-Lyon and Luxembourg-Basel), Thann is easily reached from Strasbourg (125 km), Nancy (155 km) and Besançon (140 km). Paris is 490 km distant from Thann.

The closest international airport is the Basel-Mulhouse-Freiburg Euroairport (50km) which is serviced by national and European airlines.

In the Old town of Thann © French Moments

Visit our blog Mon Grand-Est to read more about Thann at Christmas in French!