In Strasbourg, the Petite France district is arguably the city’s most romantic district, especially at nightfall. A succession of canals along which have been built beautiful half-timbered houses gives to the district a undeniable charm.

Origins of the Petite France district

La Petite France was the corner of fisherman, tanners and millers. In the 16th century, a hospital was established here for the soldiers of King of France François I. At this time, Strasbourg was still a Free City in the Holy Roman Empire and many soldiers of the French king were afflicted with venereal diseases contracted during the Italian Wars. This disease was locally known as “the French Illness” by the population of Strasbourg who was convinced that it was France’s fault. The Grand Magistrate of the city decided to isolate the sick people in a building located in the tanners’ district. The expression “Petite France” created by the inhabitants to refer to the hospital has, over the course of time, been applied to the whole district. 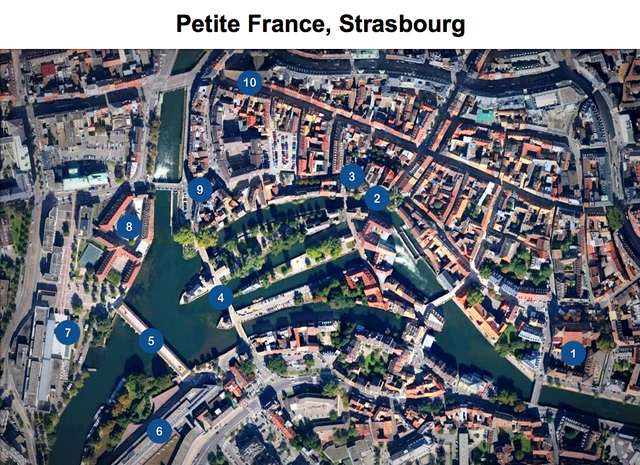 Saint-Thomas Church, the city’s main Protestant church, is located in the district’s far East. It dates back to the end of the 12th century and has been dedicated to the Protestant religion since 1529. It is easily recognisable thanks to its two massive Romanesque bell towers, one of which is square-shaped and stands above the main entrance and the other, hexagonal, at the transept crossing.

Saint Thomas is a church hall of late gothic style: its five naves are of equal height and length. This conception was very common in Rhineland, Lorraine and Holland in the 16th century.

The most famous monument inside the church is the imposing mausoleum of the Maréchal de Saxe (Marshal of Saxe), sculpted entirely in white marble by Jean-Baptiste Pigalle in 1776. In late baroque style, it is designed as a true theatrical staging. The Marshal is standing, surrounded by animals symbolising the nations that he conquered over the course of his military career to the service of Louis XV.

The church’s Silbermann organ (1741) is renowned for its beauty and tone. Mozart himself, while passing through Strasbourg in 1778, acknowledged its extraordinary sound and the Nobel Prize winner Albert Schweitzer frequently played it during his stays in Strasbourg.

You must take the time to stroll along the banks of the navigation channel and appreciate the reflections of the half-timbered houses in the water. The pretty medieval houses of the district date from the 16th and 17th centuries, and half-timbering is magnificently decorated. Their steep roofs are open over the attics where skins used to dry.

Around the Tanners’ House

You must take the time to stroll along the banks of the navigation channel and appreciate the reflections of the half-timbered houses in the water. The pretty medieval houses of the district date from the 16th and 17th centuries, and half-timbering is magnificently decorated. Their steep roofs are open over the attics where skins used to dry.

The Tanners’ House (Maison des Tanneurs) is one of these houses romantically built on the water’s edge. It was the former headquarters of the city’s Tanners Guild and today houses a restaurant.

Another building, the famous Haderer House, is also a beautiful example of the Renaissance architecture in the Rhineland.

To better appreciate the beautiful half-timbered houses, it is recommended that you walk along the street from rue du Bain-aux-Plantes towards the Ponts Couverts (Covered Bridges).

At the end of the Petite France district, the Ponts Couverts (Covered Bridges) depict another cherished postcard image of Strasbourg. This succession of three bridges linking arms with the Ill River is dominated by three 14th century towers, remains of the ancient medieval ramparts, which totalised 90 towers. The bridges themselves were once capped by a wooden roof. Despite the disappearance of this cover in the 18th century, the Strasbourgeois still call them “covered bridges”.

The Covered Bridges served to protect fluvial access to the Free City of Strasbourg, which benefited from a large autonomy allowing the establishment of its own customs. This obligatory checkpoint between the wealthy Alsatian cities located upstream from the Ill River and the Rhine contributed to Strasbourg’s commercial prosperity in the Middle Ages.

Behind the bridges, the river splits into four arms (Zornmühle, Disenmühle, Spitzmühle, as well as the navigation canal) where you can still see water mills, dams and locks. The German word “mühle” means “mill” and reminds us that the neighbours of the Petite France’s tanners were millers.

A little further south, the Vauban Barrage is one of the only buildings that remains from the old enclosure built around the city towards 1690 by Tarade, based on plans by the military engineer Vauban. The building, also called the “Grande Ecluse” (Great Lock) stretches over the width of the river, opposite the Covered Bridges. At the top of the building a panoramic terrace was constructed, from where you can appreciate a splendid view over the Petite France district, its canals, the two bell towers of the peculiar Saint Pierre-le-Vieux Church (a bell tower for each religion – Protestant and Catholic) and the cathedral in the background.

Waiting to be discovered on the West side of the Vauban Barrage is the building of the Museum of Modern and Contemporary Art, established by Adrien Fainsilber in 1998.

Several works are displayed here, notably those of Monet, Gauguin, Vlaminck, Dufy, Gustave Doré, Picasso, Richier or Buren. The museum retraces the history of modern art from the 1850s to present day, passing by impressionism, constructivism, fauvism and expressionism.

Beside it, the National Administration School (ENA) is responsible for assuring the selection of initial and continued education of French and international senior officials. Originally located in Paris, the prestigious school was relocated to Strasbourg in the early 1990s. ENA has moved into an old 14th century building, the former commandry of the Sovereign Military Hospitaller Order of St. John of Jerusalem. Many presidents, prime ministers and ministers of the Fifth Republic were former “énarques” (the name given to its students).

Some metres north of Petite France, the Executioner’s Tower (Henckerturm or Tour du Bourreau) had a bad reputation in the Middle Ages because it was where the executioner hounded the poor victims that the city’s authorities had deemed them appropriate for “interrogation”. One of the local specialties was the “Stockhus” torture, an instrument in the form of a press, in which the condemned man’s feet would be locked.

Local legend still tells the incredible story of the tortured executioner! In 1565, the city’s executioner, Sébastien Rosenkrantz, was arrested for having supported and gathered a small group of crooks whom he taught to do mischief. The penalty was of the highest order and, after having been tortured, he was executed, and his lover was publicly flogged and banished from the city indefinitely.

One hundred metres to the north stands the Saint-Pierre-le-Vieux church. It is not one, but rather two churches juxtaposed one over the other. Its two unusual bell towers mark the religious landscape that Strasbourg inherited, as a city sharing two faiths: one Protestant and the other Catholic.

An initial church was built in gothic style in 1389 and in 1529 became one of the city’s seven Lutheran Protestant parishes. In 1683, the church became Catholic once again and in 1867, ahead of an increase in the number of worshippers, the construction of a second building, perpendicular to the first, was decided.

Christmas at the Petite France district

The Petite France district is a charming little place to visit during the Advent where the Christmas decorations and illuminations are particularly treated with great care.

The Petite France organises two Christmas markets: the market of the “Invincible Small Producers of Alsace”, on Place des Meuniers, and “The trading place of the Three Kings”, on Place Benjamin-Zix.

Find out more about the Christmas Markets of Strasbourg.

More info about the Petite France!