At the heart of the Dordogne Valley between Rocamadour and Sarlat, the little town of Souillac is known for being a gateway to the Périgord and the Quercy provinces.

The town is worth a stopover on your way to the region’s landmarks and beautiful villages and castles, with its outstanding abbey church, its belfry and its medieval narrow streets. 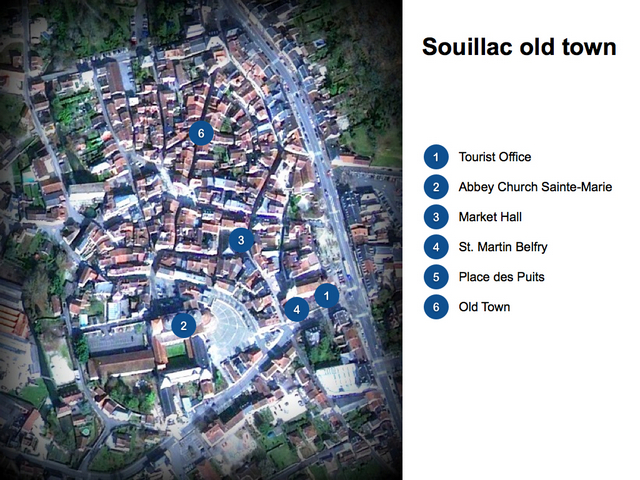 Souillac was built at the confluence of the Borrèze and Dordogne Rivers. The presence of water was significant for the development of the town and its powerful abbey.

The name of Souillac derives from “souilh” meaning “marshland” which the monks had drained.

During the Early Middle Ages (that period has been labelled the “Dark Ages” from the 5th to the 10th centuries), the fertile Valley of the Dordogne was a base from where the monks evangelised the people living in the neighbouring Causses with their vast dry lands covered with thick forests.

A religious order started in Souillac in 655 AD but was wiped away by the Barbarian Invasions. The church played a great part in the less troubled times of the 10th century. Benedictine Monks coming from Aurillac founded the Sainte-Marie monastery on the site of Souillac. Not far from the religious centre of Rocamadour and on the way to Santiago de Compostela, the abbey rapidly extended its influence over the region and contributed to the development of Souillac into a real town.

In the 12th century, the monastic community built the church which still stands today and is devoted to the Virgin Mary.

Alongside the abbey, the Dordogne River itself participated in the flourishing development of Souillac from the 12th century. The river acted as a strategic link between the High and the Low valley of the Dordogne, between Auvergne and Aquitaine. Trade was based on the exchange of goods: wines from Bordeaux and salt from the Atlantic were traded for wood from the Massif Central.

The upstream navigation using towpaths coming from Libourne and Bergerac ended in Souillac. The town’s harbour was busy with the sailors loading and onloading the goods transported by the gabares (the local name for barges).

The Hundred Years War left its marks in Souillac. In 1351, the English seized the town from where they were easily able to ravage the lands of the Turenne Viscounty and block the passage of the Dordogne River. Two years later, the town managed to buy its own freedom before falling back into the English province of Aquitaine in 1360 by the Treaty of Brétigny.

Once the conflict ended in 1453, trade on the River Dordogne had collapsed, leaving the town in a state of despair. The rebuilding stage took a long time and stopped again in 1560 with the Wars of Religion. The town changed hands many times and was ransacked on several occasions. The monastic buildings were burnt down and the abbey church seriously damaged. In the old town, the now-ruined belfry can testify to the tragic conflict.

After the peace was signed at the Treaties of Westphalia in 1648, Souillac underwent an era of prosperity. In the 18th century, the traders of Souillac were known as being a powerful corporation. Large warehouses storing salt and colonial goods were operating in the town.

In 1812, Napoleon ordered the construction of a bridge along the route to Toulouse that could let his armies cross the Dordogne on their way to Spain.

However, the river trade on the Dordogne met its decline with the coming of the railway line between Bordeaux and Aurillac in the second half of the 19th century. Today, Souillac plays on its touristic appeal as a gateway to the beautiful regions of the Périgord Noir and the Haut-Quercy.

The Sainte-Marie Church was built between 1075 and 1150 and ranks among the finest examples of Romanesque and Byzantine architectural styles in the South-West of France. Laid out on the plan of a Latin cross, the sanctuary was inspired by the church of Haghia Sophia in Istanbul.

The old town of Souillac is made up of tortuous narrow streets whose lay-out directly emanates from the Middle-Ages. They all lead to the Place du Puits (Well Square) where the inhabitants would find the sole source of water.

The market hall situated on Place Doussot was built from 1832 to 1836 and has been listed as a historical monument by the French National Heritage Fund since 2004.

The belfry was originally the bell tower of the St. Martin church that was dismantled by the Protestants in 1573 during the Wars of Religion. The tower used to support a spire until 1573. The portal of the former church is surmounted by a Romanesque tympanum. It opens to the inside which has been transformed into an exhibition hall.

Since 1988, the abbey gardens have sheltered the Mechanical Toy Museum (Musée des Automates), the largest of its kind in Europe. It features a collection of mechanical toys from the 19th and 20th centuries from the Roullet-Decamps workshops which was founded in 1865.

How to get to Souillac

Souillac is easily accessible by car from Paris (517 km, 5 hrs), Bordeaux and Toulouse, via the A20 and A89 autoroutes (French for motorways).

If you travel from Australia or America, you could take a flight to Paris Charles de Gaulle, and travel by TGV from the airport station straight to Brive-la-Gaillarde or Cahors and rent a car from there.