New posts
You are at:Home»Paris»Arrondissements of Paris»4th Arrondissement of Paris»The Sens Hotel: a fine Loire chateau in Paris

When I organised walking tours in the Marais district, I always made sure to reveal the Sens Hotel to my clients. The medieval mansion is located in rue du Figuier and is slightly set back from the Quai des Célestins which borders the River Seine. With its Gothic and early Renaissance features, the Hôtel de Sens looks like a small château of the Loire. Let’s have a closer look at it!

The powerful archbishops of Sens

Or should we say where is Sens?

Sens is a little town in Burgundy 120 km South-East from Paris. It is home to one of the earliest Gothic cathedrals built in the 12th century in France.

During the Middle Ages, Sens was an important religious place. Its archbishops hold the prestigious title of  “Primate of Gaul and Germany“. They ruled over a very large territory covering the dioceses of Auxerre, Nevers, Troyes, Orléans, Chartres, Meaux and most notably Paris.

The Sens Hotel in the Marais

When the Sens archbishops travelled to the French capital, they resided in a private mansion they had built in the Marais district: the Sens Hotel (or in French: Hôtel des archevêques de Sens).

Archbishop Tristan de Salazar had it built between 1475 and 1507.

Interestingly the new mansion combined late-medieval civil architectural features with the first manifestations of the Renaissance. No wonder it looks like a château of the Loire!

The layout of the Sens Hotel comprises a corps de logis, an entrance courtyard and a garden.

The lancet gateway is topped with a tympanum which once contained the coat of arms of the Sens archbishops (they have been destroyed during the French Revolution).

The manoir with its fortress-like appearance reflects the prominence of the archbishop’s rank and influence. To this date, it is one of the finest medieval residences in Paris along with the Cluny Hotel.

The Sens Hotel was the meeting place for the Council of Sens (or Council of Paris) which opened on the 3rd February 1528 and ended 8 months later. It condemned the doctrine of Martin Luther.

Then the mansion welcomed Margaret of Valois (commonly known as Queen Margot) whose marriage with Henry III of Navarre (later King Henry IV) was annulled in 1599 by the decision of the Pope.

The decline of the Sens archbishops

Details of the balcony in the Inner courtyard © French Moments

In 1622 Paris was elevated to an archdiocese and the Sens archbishops lost a great part of their influence. They spent less and less time in their Parisian home. Consequently, they ended up renting their residence.

Unsurprisingly the Sens Hotel was confiscated during the French Revolution. Sold in 1797, it was then occupied by successive tenants, many of them being shops, workshops or factories.

The City of Paris bought the Sens Hotel in 1911 and restored it in the 1930s. It became home to the Forney art library in 1961. The library is specialised in decorative arts (textile and graphic art) with a collection including 230,000 prints and 48,000 museum catalogues.

The cannonball of the Sens Hotel

The cannonball from the July Revolution © French Moments

The façade of the Sens Hotel has a curious feature that will surprise you.

When facing the entrance gate of the mansion, look closely above it a little bit to the left. You’ll notice a cannonball stuck deep within the wall.

The date engraved beneath it indicates 28 July 1830. These were the days of the July Revolution which saw the overthrow of King Charles X. Street fights intensified during the Three Glorious Days (les Trois Glorieuses).

However, some doubt that the cannonball did really hit the wall there…

The garden of the Sens Hotel

Finally, the formal garden of the Sens Hotel is now a public garden. It is a very pleasant place to rest when walking in Paris. Although small in size, it is ornate with low trimmed box hedges framing flowerbeds.

Where to find the mansion? 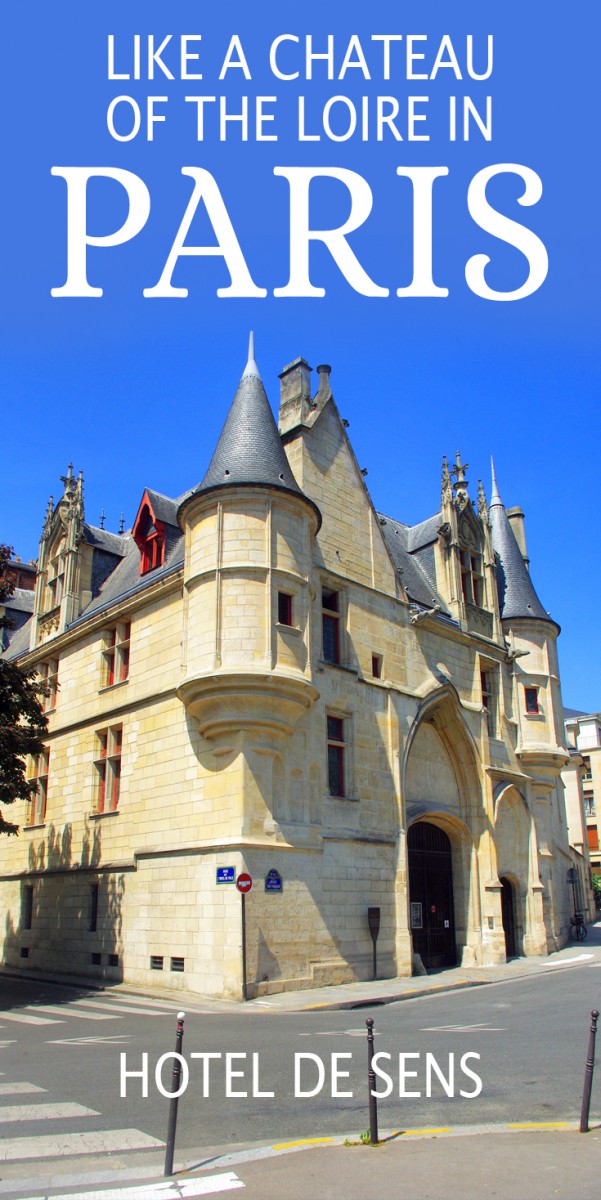