Saint-Jean-Cap-Ferrat: A Seaside Resort on the Riviera

Saint-Jean-Cap-Ferrat: A Seaside Resort on the Riviera

Plan your trip to Saint-Jean-Cap-Ferrat! 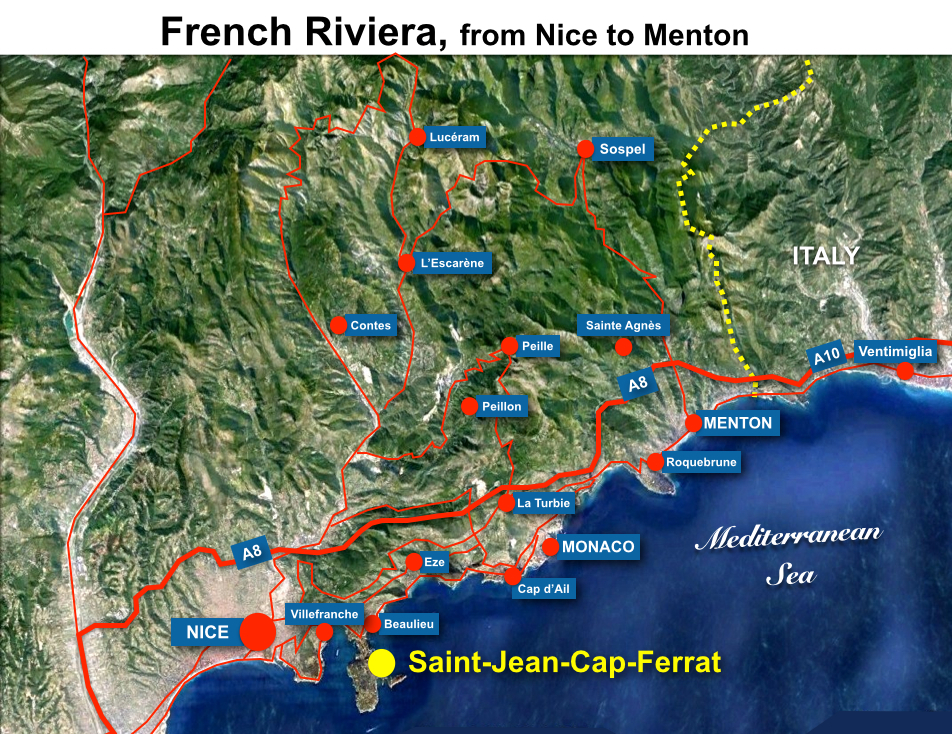 Saint-Jean-Cap-Ferrat: a bit of History

In Ancient Times, the peninsula was known to Greeks as Anao.

In the 6th century, the peninsula hosted its first celebrity: St. Hospitius, a hermit from Egypt who lived in a dilapidated tower on the site of today’s Chapel St. Hospice. According to tradition, St. Hospitius was taken prisoner during one of the Lombards’ raids in the region. He worked a miracle in their favour and contributed to their conversion to Christianity.

In the 9th and 10th centuries, the biggest threat came from the south, with the Saracens occupying the peninsula until their defeat in the 11th century.

Then, the peninsula of Saint-Jean-Cap-Ferrat shared the same history as the neighbouring town of Villefranche-sur-Mer as it was part of the same commune. The hamlet of Saint-Jean consisted of tiny fishermen’s houses clustered around the church and the harbour.

In the 14th century, Villefranche (including Saint-Jean) and the County of Nice became part of the Duchy of Savoy.

Between 1793 and the end of the Napoleonic Empire in 1814, the French occupied Saint-Jean and the County of Nice. By the Congress of Vienna in 1815, the County was retroceded to the Kingdom of Piedmont-Sardinia.

In 1860, the County of Nice was given to France following a referendum.

The first villas began to appear in 1880 along the Promenade Maurice Rouvier between Saint-Jean-Village and Beaulieu.

In 1904, Saint-Jean separated from Villefranche-sur-Mer and became a commune known as Saint-Jean-sur-Mer, later renamed Saint-Jean-Cap-Ferrat.

During the Belle Époque, Saint-Jean attracted celebrities and upper-class visitors who built grand and extravagant villas during their winter vacations.

The village centre of Saint-Jean is relatively small but has many cafés, restaurants and shops along the quays.

This is where the small fishing village of Saint-Jean started to grow. Between 1840 and 1876, convicts imprisoned in the Villefranche prison worked on its extension and in 1972, a new marina was inaugurated to accommodate 560 boats, including 400 at private moorings.

Edified in the 19th century, the church replaced a former sanctuary from the 11th century.

On the 24 June of each year takes place a procession during which the statue of Saint John the Baptist is brought by the locals to the pier of the old port.

The Chapel was built in the 17th century on the ruins of a tower which housed the hermit St Hospitius. Next to the chapel stands an 11-metre high bronze statue of the Virgin.

A lighthouse was built in 1732 to replace a former fire tower from the 16th century. Destroyed in 1944, it was rebuilt after WW2.

The Semaphore (Coastguard Station) was built in 1862 by order of Napoleon III. Managed by the Marine Nationale (French navy), it controls the movement of shipping in the area and also keeps a watch out for fires starting along the coast.

The peninsula’s tip is occupied by the Grand Hôtel du Cap, a luxurious palace surrounded by a beautiful garden. The hotel was built in 1908 to accommodate a wealthy cosmopolitan clientele. In 2011, it receives the prestigious label ‘palace’ (5 stars).

Overlooking the Mediterranean coastline, the Villa Ephrussi-de-Rothschild is undoubtedly one of the jewels of the French Riviera.

During the Belle Époque, Baroness Ephrussi de Rothschild (1864-1934) bought a 7-hectare hillside overlooking the sea on the narrow isthmus of the peninsula. From 1905 to 1912, she had a villa built there inspired by the Italian Renaissance style with a Spanish influence. Also called Villa Île-de-France, the residence was designed by French architect Aaron Messiah. The new residence intended to exhibit her impressive collection of more than 5,000 works of art from the 14th to 19th centuries: 18th-century furniture, lamps, oil paintings, tapestries, china from Vincennes and the Royal Manufacturers of Sèvres…

The villa is surrounded by nine beautiful themed gardens (Spanish, French, Provençal, Florentine, Japanese, Exotic, Lapidary…) inspired by the travels of the Baroness. These elaborate gardens, designed by landscape architect Achille Duchêne, have been listed by the French Ministry of Culture as “Jardin Remarquable”.

View of the villa from the formal garden and its ponds:

View of the gardens from the villa:

On the death of the Baroness in 1934, the entire estate and its collections were donated to the Academy of Fine Arts of the Institute of France.

Each year, more than 130,000 people visit the domain, making it one of the most popular attractions between Nice and Menton.

The peninsula of Saint-Jean-Cap-Ferrat is best enjoyed by walking along one of the three signposted tracks. In addition to the Saint-Hospice walk and the Maurice Rouvier walk between Saint-Jean and Beaulieu, the Peninsula Tour walk is a must-to-see when visiting the region.

Running around the peninsula, the path is known as “sentier des douaniers” and is 7 km long. It takes approximately 1.30 hrs to complete. The path follows the coast passing in front of and below magnificent villas or through secluded coves with glimmering views of the French Riviera coastline from Italy to the Esterel mountains.

Saint-Jean-Cap-Ferrat is easily accessible from Nice via the Corniche Inférieure (Lower Corniche or D6098), which follows the coastline around Mont Boron and crosses Villefranche, or via the D6007-D133 roads, which give more direct access.

The railway station of Beaulieu-sur-Mer is situated on the Nice-Ventimiglia TER line with frequent service.

From the station of Beaulieu-sur-Mer, bus #81 reaches the peninsula of Saint-Jean-Cap-Ferrat.

Nice, France’s third airport after Paris CDG and Orly, is situated only 18 km from Saint-Jean-Cap-Ferrat.