The village is located in the Boischaut, a natural area of the old province of Berry, 20 km to the South-West of Argenton-sur-Creuse and 57 km South of Chateauroux. Now incorporated in the Indre département, Saint-Benoît-du-Sault overlooks the valley of the River Portefeuille. 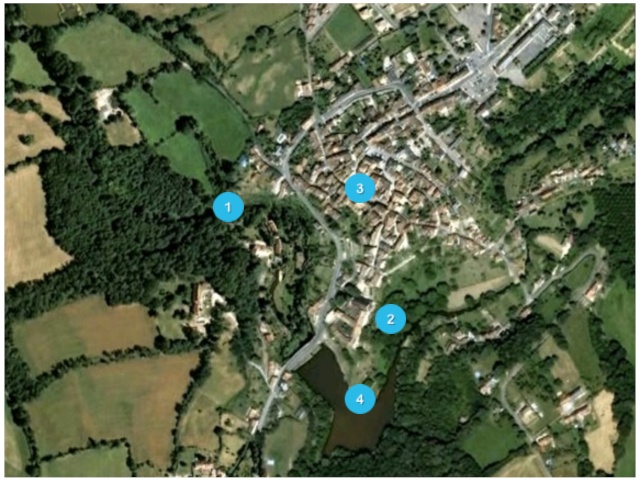 A stroll through the narrow little streets of the village leads to old townhouses, ramparts, belfries and fortified gates, which testify the long-gone importance that medieval Saint-Benoît-du-Sault used to have in the region.

Human presence in the vicinity of the village is evidenced by two huge dolmen stones hidden away in a field at La Châtre-Langlin. Legend has it that the village was founded some three thousand years ago by a warrior named Salix, originally from the ancient city of Troy in Minor Asia. The warrior got lost in the thick forests and was consequently separated from his two companions, Lemovix and Pictavix whom would eventually found the cities of Limoges and Poitiers. Salix was taken in by local druids whom he convinced to cease human sacrifices.

However, the history of Saint-Benoît-du-Sault started with Benedictine monks who founded a monastery there in 974. Originally based in Sacierges-Saint-Martin, they decided to transfer their priory to the granite spur of Saint-Benoît-du-Sault, a better option against the barbaric incursions and other threats of the 10th century. Their fortified priory was given the name of Salis, with reference to the thick woods surrounding the town, which would eventually became Saint-Benoît-du-Sault.

From the 10th to the 17th century, the site was often tossed around by the possessive desires of feudal lords. During the Middle-Ages, Saint-Benoît-du-Sault was transformed into an impregnable fortress by the lords of Brosse to whom it owes its medieval aspect made up of a double line of ramparts and the narrow cobbled streets of the fort. The actual coat of arms of Saint-Benoît-du-Sault is that of the Brosse dynasty.

Almost nothing has changed since the Middle-Ages and Saint-Benoît-du-Sault managed to keep its rich architectural heritage up to today. “Going into Saint-Benoît is like stepping back into a past world, a world where modern day stresses cease to exist, and where you can enjoy the unsurpassed pleasure of simply being there” (FPL).

Today, Saint-Benoît-du-Sault is a lively touristic village on the border of Limousin and Berry, whose village life is punctuated by popular celebrations (Bastille Day fireworks, August sheep fair), and a weekly open-air market. If you plan to stay there for holidays, there are some local shops in the village, including boulangeries-pâtisseries, a butcher, a post-office, and a newsagent, without forgetting good restaurants serving local dishes.

The old medieval town, called “the Fort” is protected by an inner ring of thick ramparts. This upper part of the village is closed by a fortified gatehouse standing close to the village’s belfry, dating from the 14th century. It includes the Romanesque church, the priory and the actual fort.

The district of the fort (“Quartier du Fort”), located on top of the rocky spur, is the oldest part of Saint-Benoît-du-Sault.

The Saint Jean-Baptiste Church is one of the oldest monuments in Romanesque architecture as its construction started in 1020. Its floor plan is similar to a Romanesque basilica and its capitals (the crowning members of the pilasters) and baptismal font are primitive. Recently renovated, the church is lightened by contemporary stained-glass windows by Jean Mauret. The western portal and the bell tower date back to the late 13th century.

Next to the church, at the extremity of the spur overlooking the Portefeuille valley, stands the priory. Originally founded in 974, the current buildings date back from the 15th and 18th centuries.

From the terrace of the Church, there is a fine view over the man-made lake and its 18th century dam. When built, it was considered as one of the most beautiful in the kingdom.

Further on, the fortified gatehouse with its portcullis, located next to the belfry, opens the access to the 15th century part of town, the trading district. Encircled inside a second ring of ramparts, of which only the walls, walkways and the Grimard Tower remain, the district was developed in the 15th century. The narrow and sloping cobbled streets are bordered by old townhouses of the 15th and 16th centuries.

In the vicinity of Saint-Benoît-du-Sault

Just outside the village, the Jardin des Merveilles on the D10 road to Prissac has gained local fame for growing more than 4,000 plant species.

There are many sites to explore in the vicinity of Saint-Benoît-du-Sault, including 15th to 19th century castles and Romanesque churches.

The landscape around Saint-Benoît-du-Sault includes the waterfalls of Aire aux Martes and the picturesque valleys of the Portefeuille, Anglin and Abloux.

How to get to Saint-Benoît-du-Sault

The A20 motorway linking Paris to Toulouse passes near Saint-Benoît-du-Sault. From Paris (300 km), take exit number 20 and drive a further 7km the D36 road to the village. From Toulouse or Limoges, take the exit number 21 and continue on the D10 for 10 km.

From Paris, a train leaves Gare d’Austerlitz to Limoges, Brive and Toulouse. Stop at the station of Argenton-sur-Creuse, 20 km away from Saint-Benoît-du-Sault. From there, either take a taxi or local coach (autocars régionaux).

From Toulouse and Limoges, stop either at La Souterraine, Saint Sébastien or Argenton-sur-Creuse.