New posts
You are at:Home»Paris»Arrondissements of Paris»17th Arrondissement of Paris»Discover the chic street of rue Fortuny in Paris

Rue Fortuny in the 17th arrondissement is little known by many tourist guides in Paris. I recently read a history book about the former commune of Batignolles-Monceau. I learnt about this chic street and decided to head to rue Fortuny just a step away from Parc Monceau. Follow me to this stunning ‘open-air museum’ street.

Rue Fortuny: a bit of history The street was created in 1876 on lands that belonged to French painter Louis Godefroy Jardin (1805-1892). Towards the end of the 19th century, rue Fortuny was a street sought by artists and the upper bourgeois class for its calm and proximity to Parc Monceau. This explains the many beautiful and sometimes surprising façades. The different architectural styles reflect this prosperous period that was eclectic and historically based.

Today the street is home to lawyer, insurance and fiducial firms, and the residence of the ambassador of Iran. Former French Prime minister Dominique de Villepin has bought a mansion there and former President Nicolas Sarkozy resided in the street in his childhood.

Some mansions of rue Fortuny

The façades of the mansions match each other in beauty and prestigious residents. Here are a few mansions whose façades are worth noticing:

Edmond Rostand (1868-1918), a French poet and dramatist lived at number 2 from 1891 to 1897 where he wrote his famous play Cyrano de Bergerac. A commemorative plaque is fixed onto the wall.

What a strange house to find in central Paris! The mansion was built in 1882 by architect Alfred Boland in Troubadour-Gothic style. Notice the architectural details: the fake half-timbered façade, sculpted friezes, niches housing little statues, mouldings on door and window frames…

Between 1889 and 1890, Paul-Adrien Gouney built the Neo-Renaissance mansion at number 9 for Benjamin Morel. It consists of two squared levels surmounted by a third one with sloping ceilings (mansardé in French). The architect played with the polychromy of the materials used. Notice the first floor: the balustrade is made in stone and the walls consist of coloured bricks. Above it is a large frieze in faience (or earthenware) forms a turquoise and red line. The second floor features a loggia. Stone pilasters support a cornice decorated with terracotta flowerets and sheet-metal birds.

The mansion at number 17 was built in 1884 by Charles-Edouard Weyland (1830-1892) for Louis Herbette, Prefect of the Loire-Inférieure département (now Loire-Atlantique). Its architecture is a mix of Renaissance and Louis XIV styles.

The house at number 19, rue Fortuny was built by Jean Brisson (1848-1903) in 1891 for Arsène Picard. The cut stone building was built in Neo-Renaissance style. Notice the bow-window on the first floor.

The street at number 27 © French Moments

Known as the Hôtel Englebert, the mansion at number 27 was built in 1878 by architect Adolphe Viel. The façade is patterned with three window bays and three square levels. The decoration includes turquoise earthenware tiles. There resided Carolina « La Belle » Otero (1868-1965), a famous dancer, actress and courtesan of Spanish origin.

Towards the junction with avenue de Villiers, the number 35 was built in 1876 by architect (and painter) Nicolas-Félix Escalier (1843-1920). The building is a mix of different styles: Gothic and Renaissance. Notice the gargoyles on the cornice and the beautiful railings. The mansion once belonged to Sarah Bernhardt. Bankrupted, the actress had to sell it in 1885. In 2012 it was bought by former French Prime minister, Dominique de Villepin. One last thing: have you noticed the two playing rats that were fixed onto the façade?

The rats at number 35 © French Moments

How to get to rue Fortuny?

The street in the 17th arrondissement of Paris © French Moments

More photos of the street

The street at number 27 © French Moments 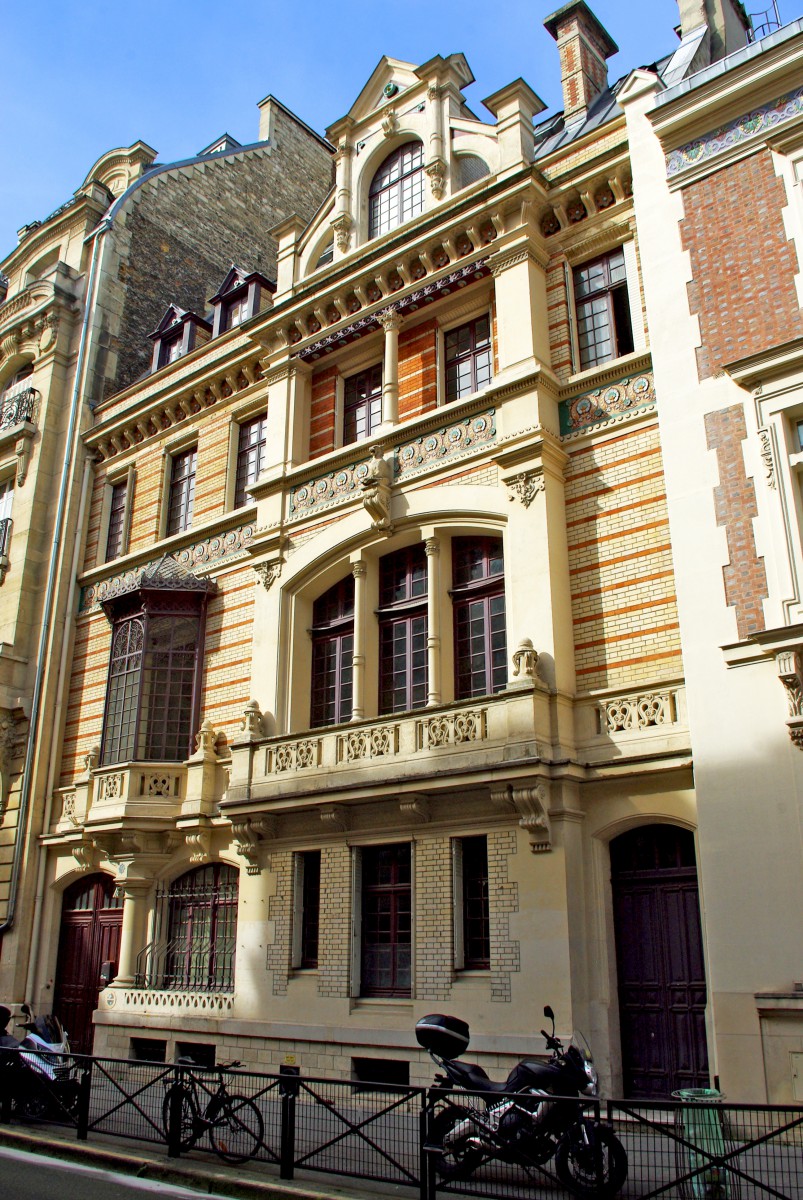 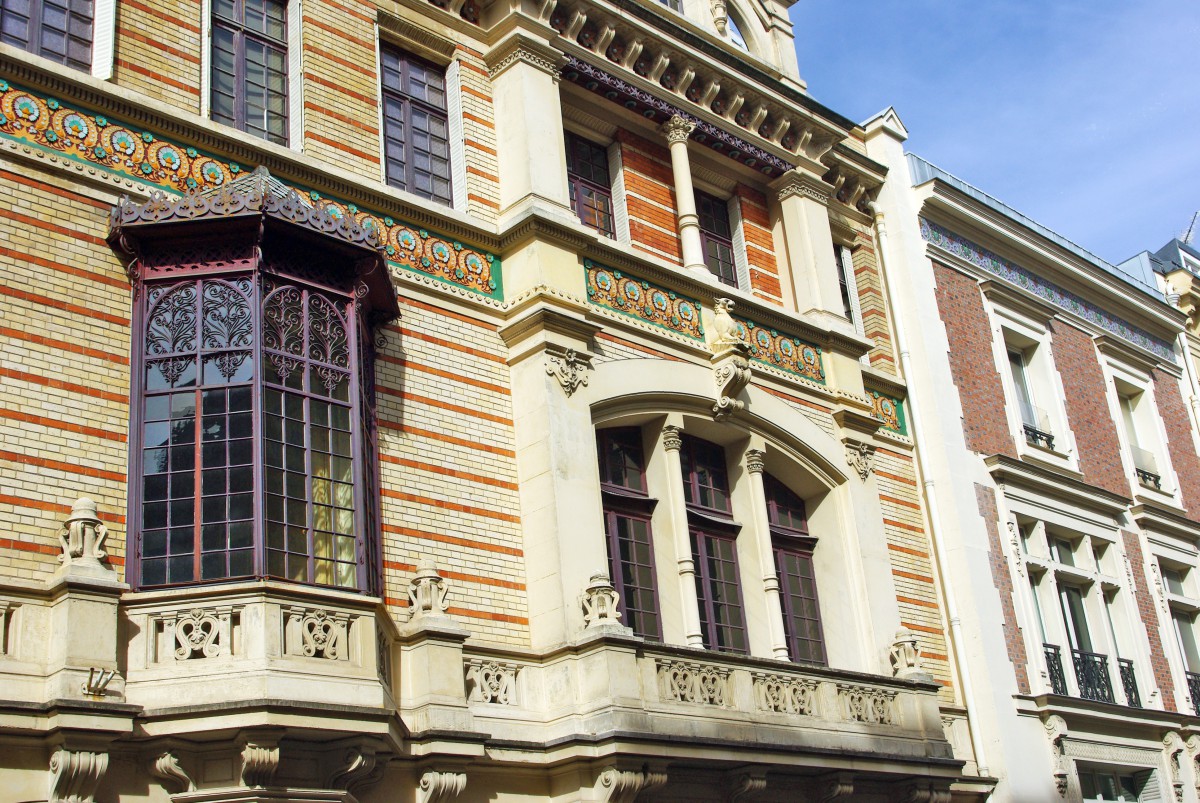 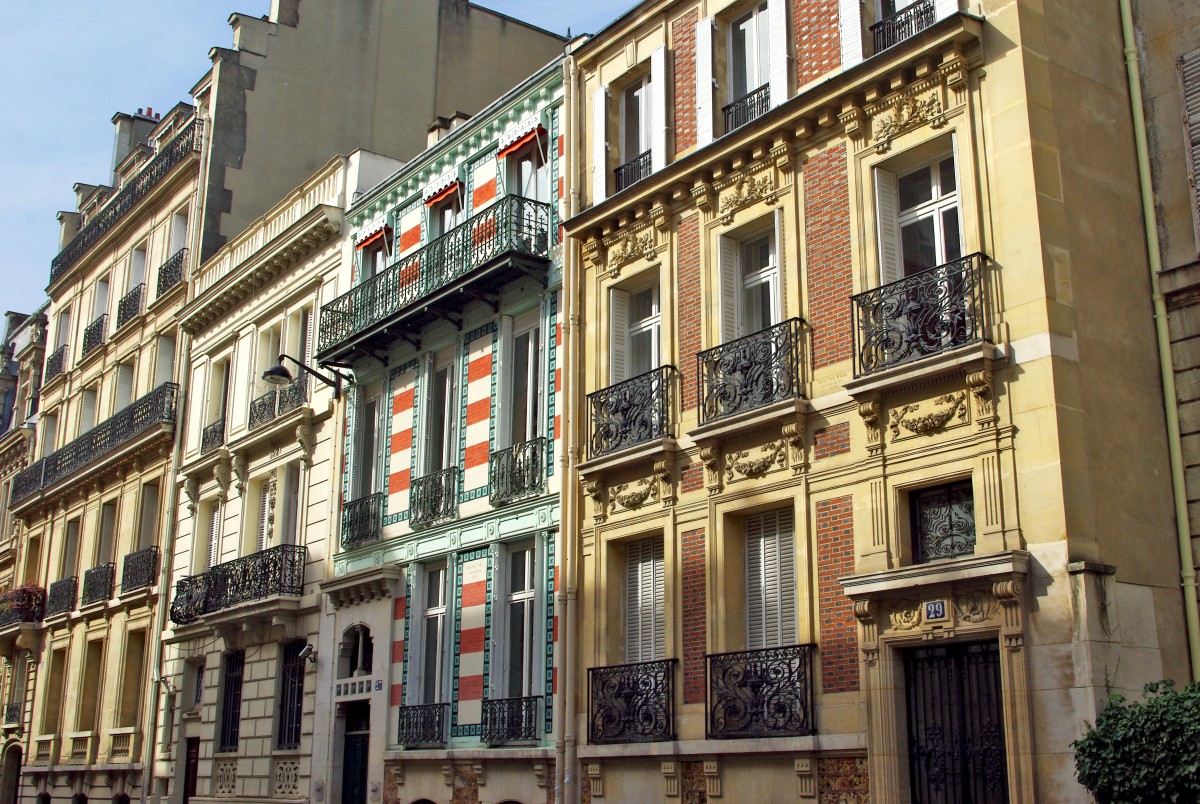 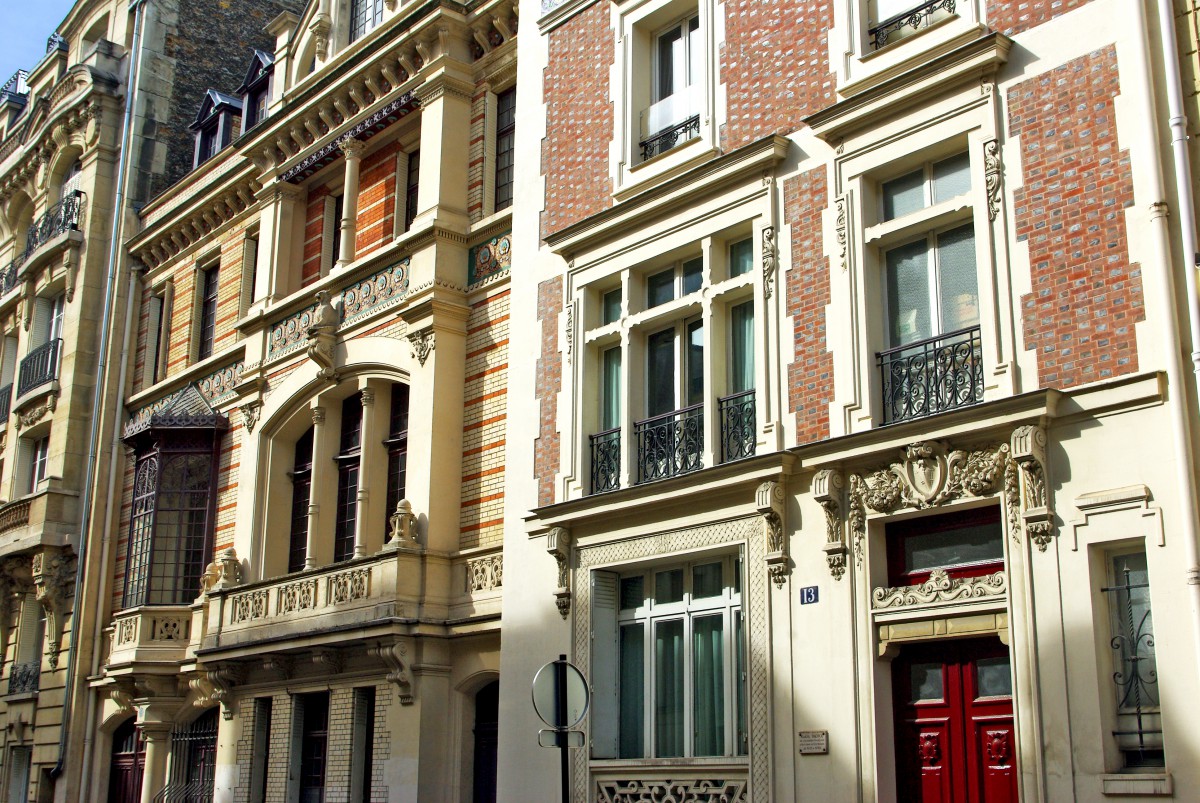 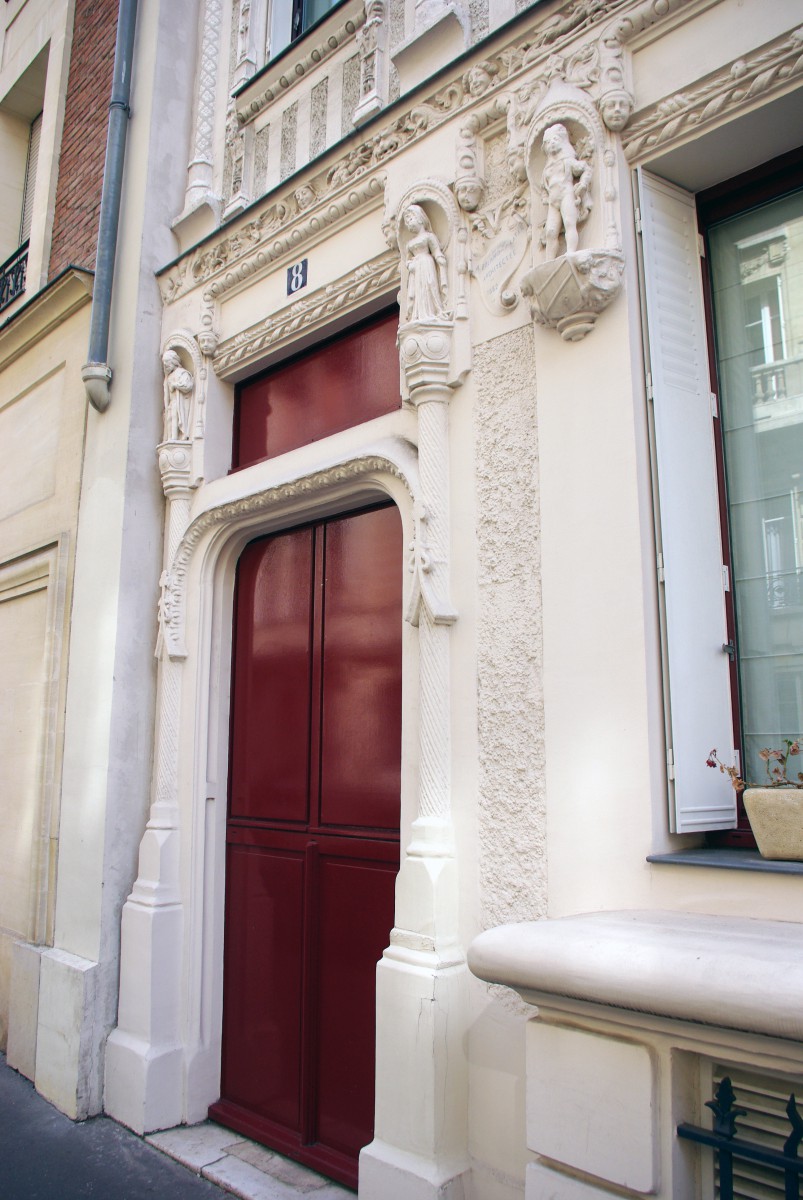 The street at number 8 © French Moments 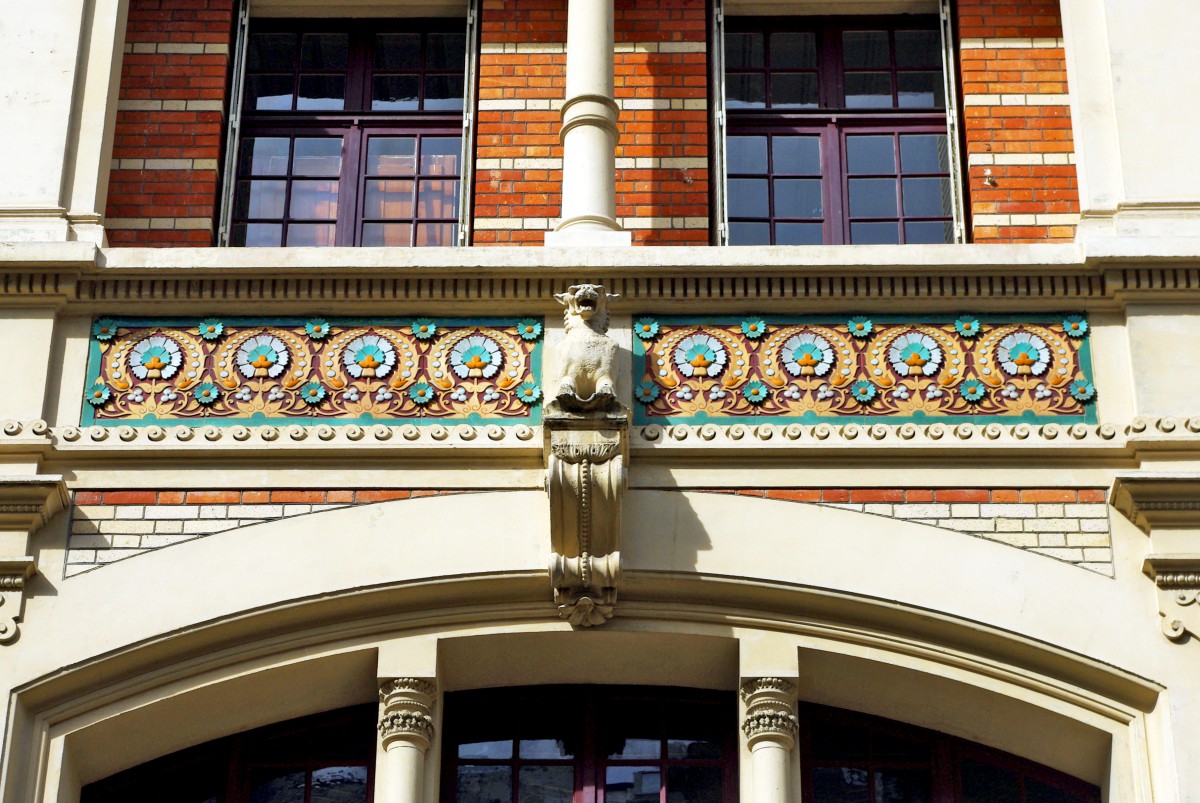 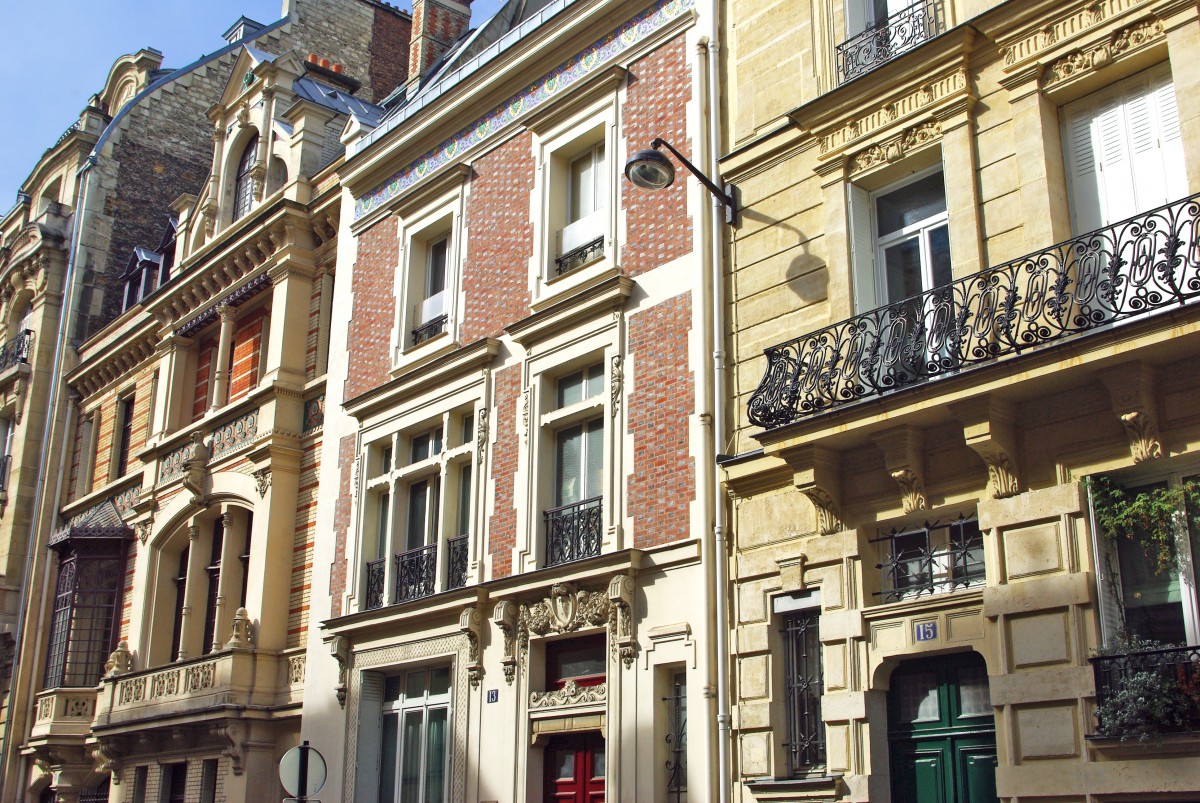