Roussillon in Provence: What to See and Do

Roussillon in Provence: What to See and Do

Roussillon lies in the northern part of the Luberon, between the Luberon mountain and the Vaucluse Plateau. The village is famous for its ochre quarries that were exploited from the end of the 18th century until the 1930s.

Watch this short video on the Luberon!

Why you should visit Roussillon

Roussillon is a delightful Provençal village and the second most visited in the Luberon after Gordes. Its location at the top of a steep hill certainly gives it a fantastic panorama, and it is labelled as one of the most beautiful villages of France (plus beaux villages de France). 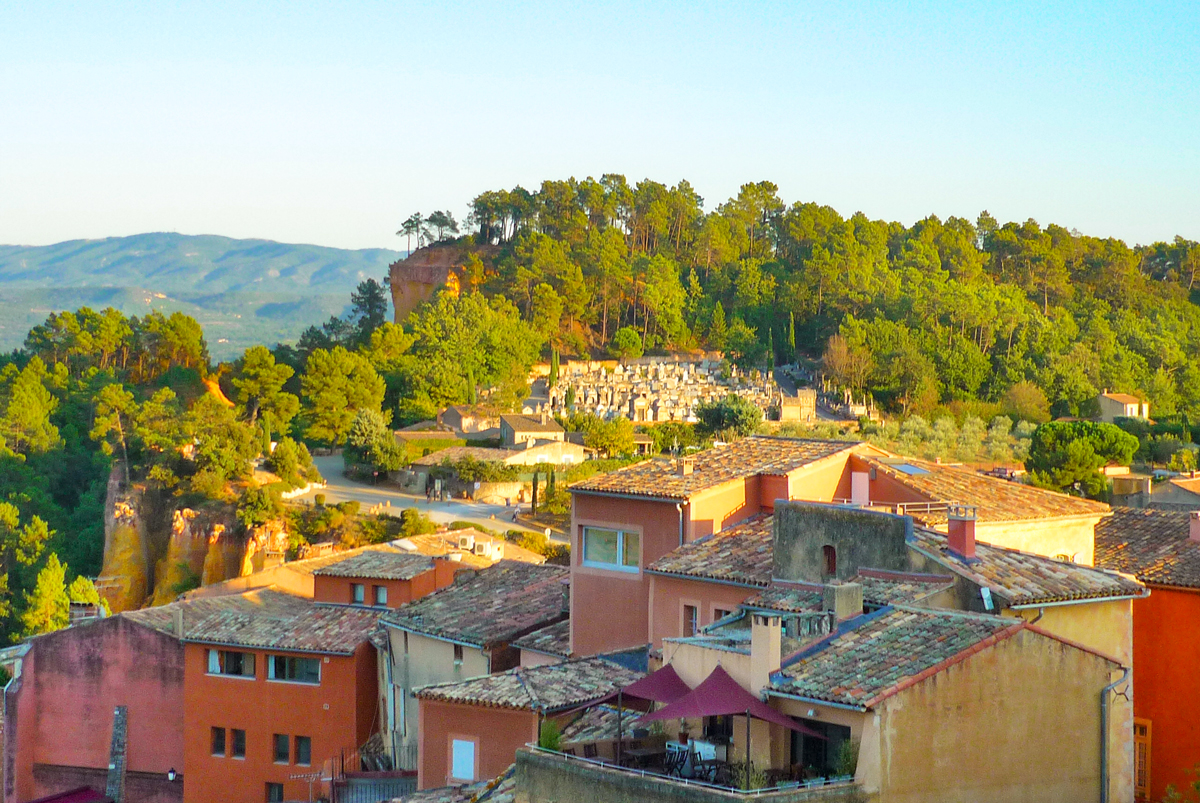 Part of the village © French Moments

The village originated from a small castle built there in 987 and now contains several beauties such as the Saint Michel church and pretty, colourful facade buildings. 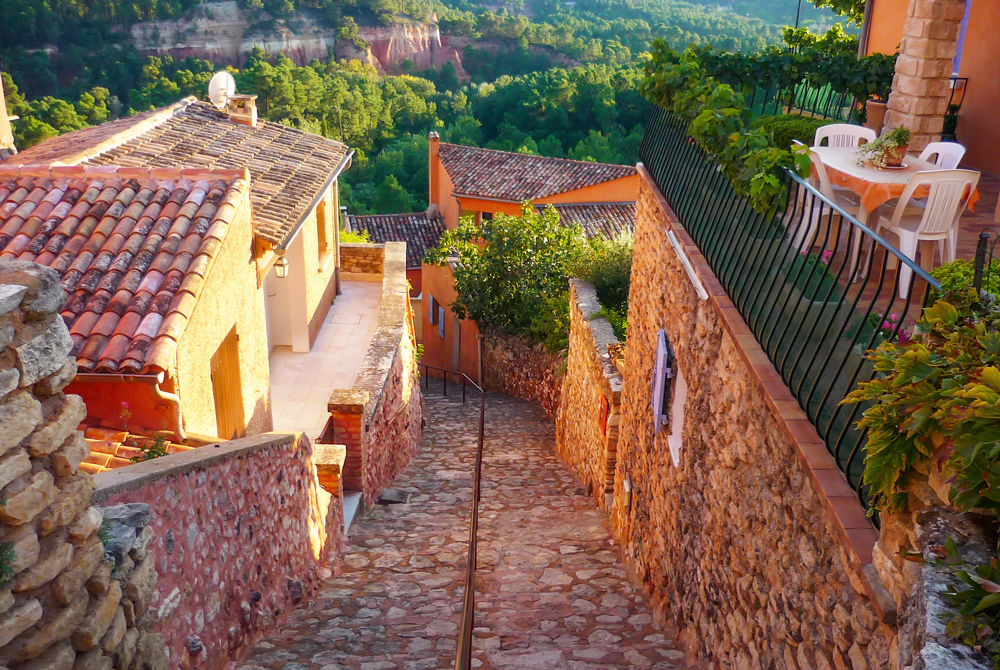 A peaceful street in the village © French Moments

The village has no historical monuments worth visiting. However, Roussillon is a not-to-miss hilltop village in the Luberon for its colourful façades. Indeed, ochres of an infinite variety compose the frontages of the houses (sometimes in trompe l'oeil on a gate or a wall) and the surrounding landscape. 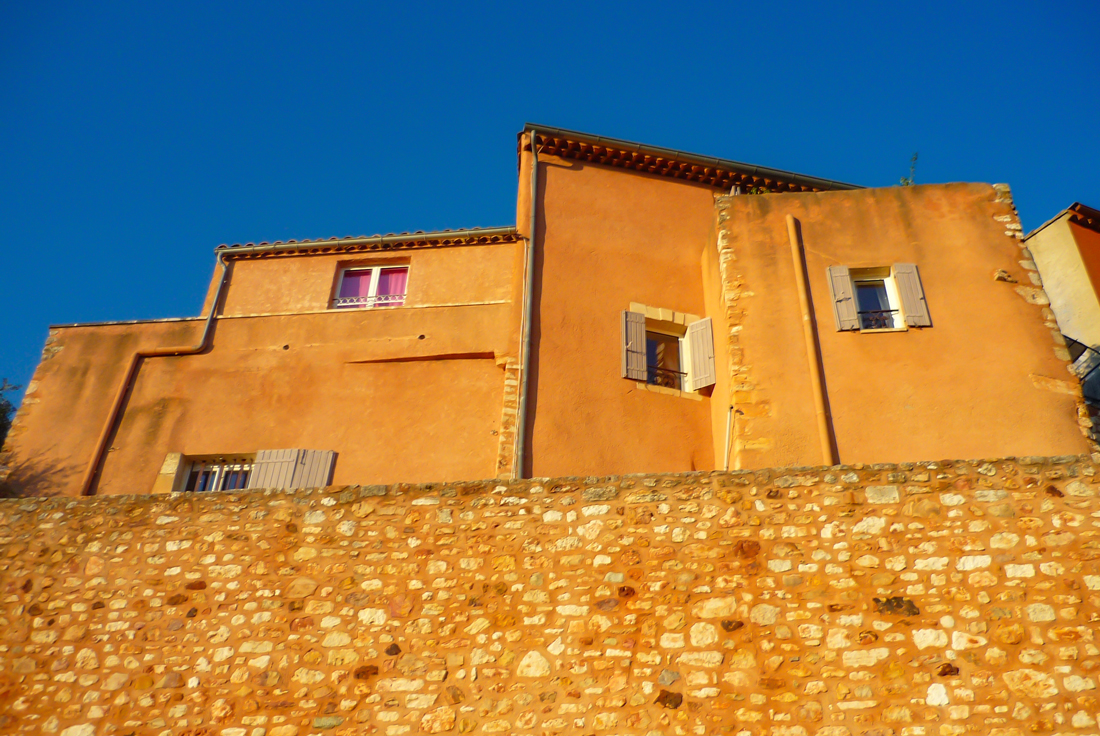 A low-angle view of the village © French Moments

The square was first used for grazing, then for the seven annual fairs. It now serves as a car park.

The square welcomes the traditional open-air market on Thursday morning. 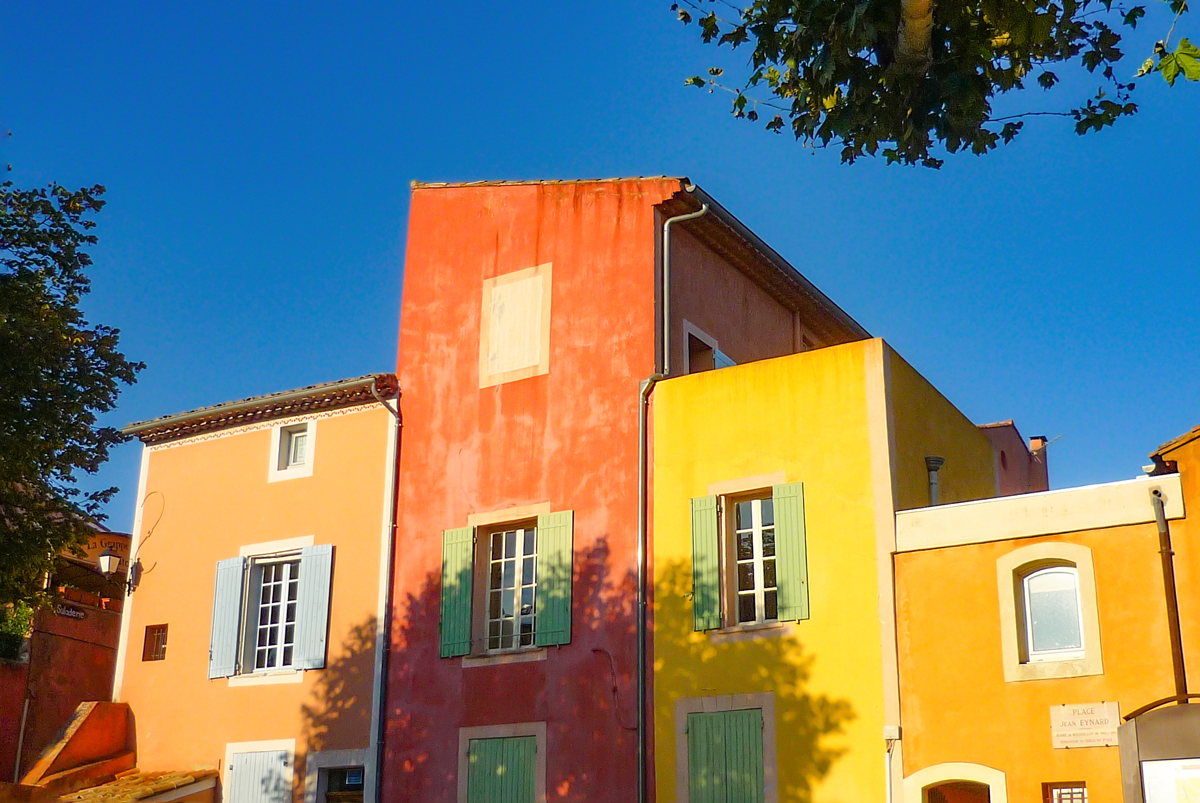 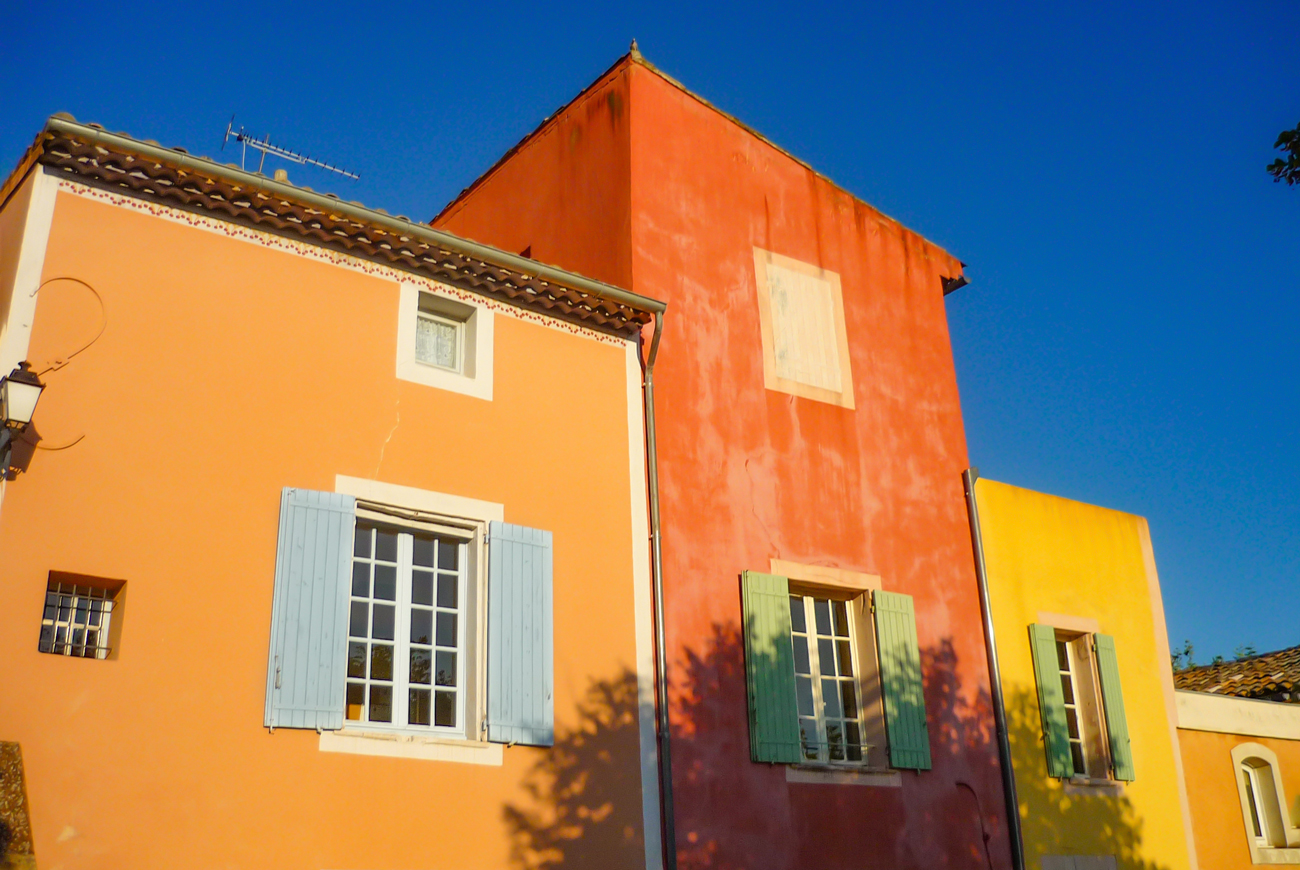 The winding central streets (rue des Bourgades, rue des Lauriers) lead to the top of the village. During your stroll, you will discover art galleries, Provençal shops and townhouses from the 17th and 18th centuries. 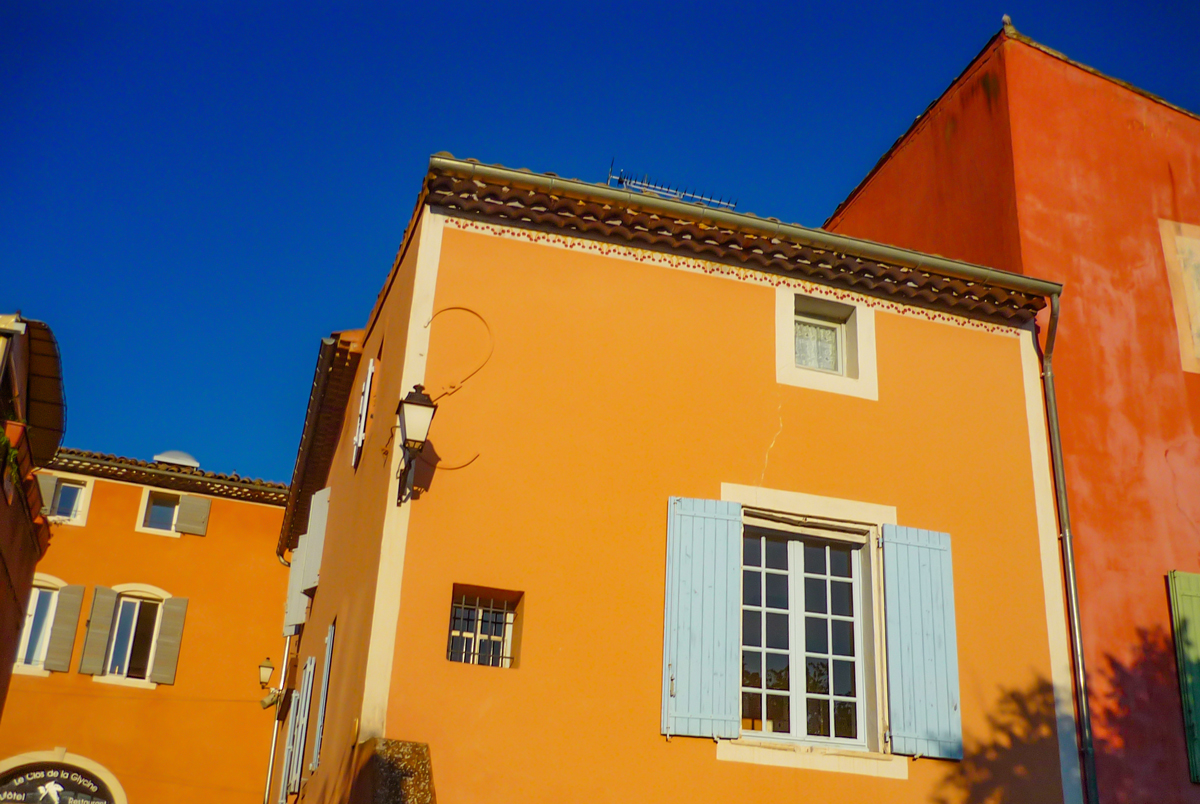 At each street corner, the eye catches a typically Provençal detail which inspires one to dream. 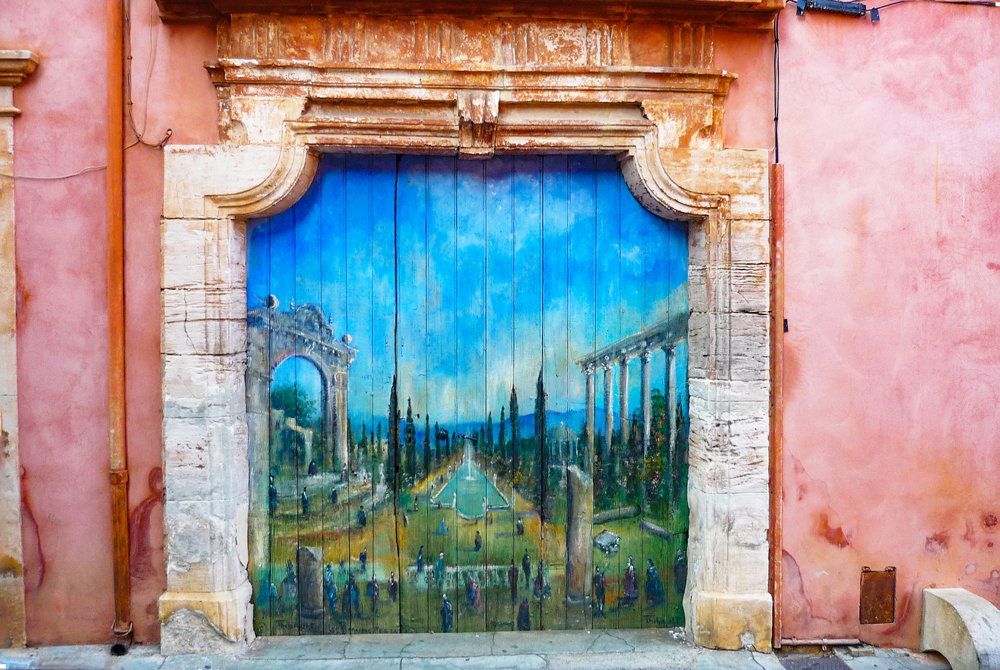 This square means "le dessous du four" (under the oven) because the baker's oven was located in the rock dug out to house a house. Avon was an abbot who devoted himself during the plague epidemic of 1720. On the left is the Porte Heureuse.

Adjacent to Place de l'Abbé-Avon is the town-hall square with beautiful 18th-century houses, including the Mairie. 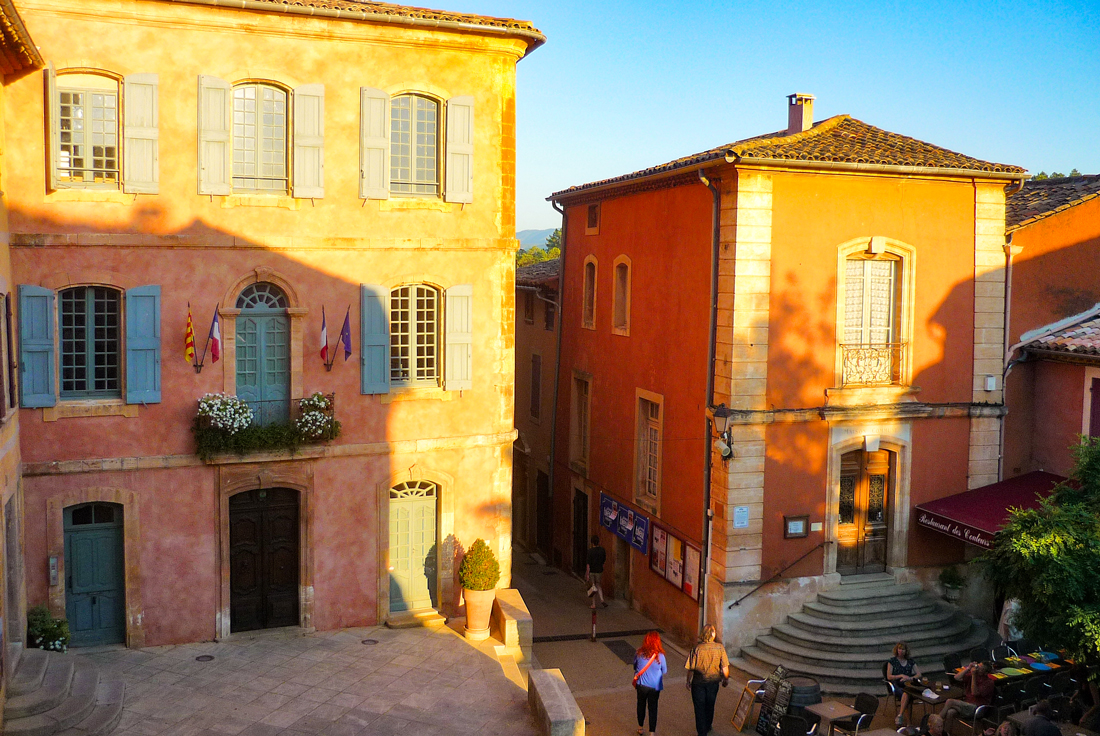 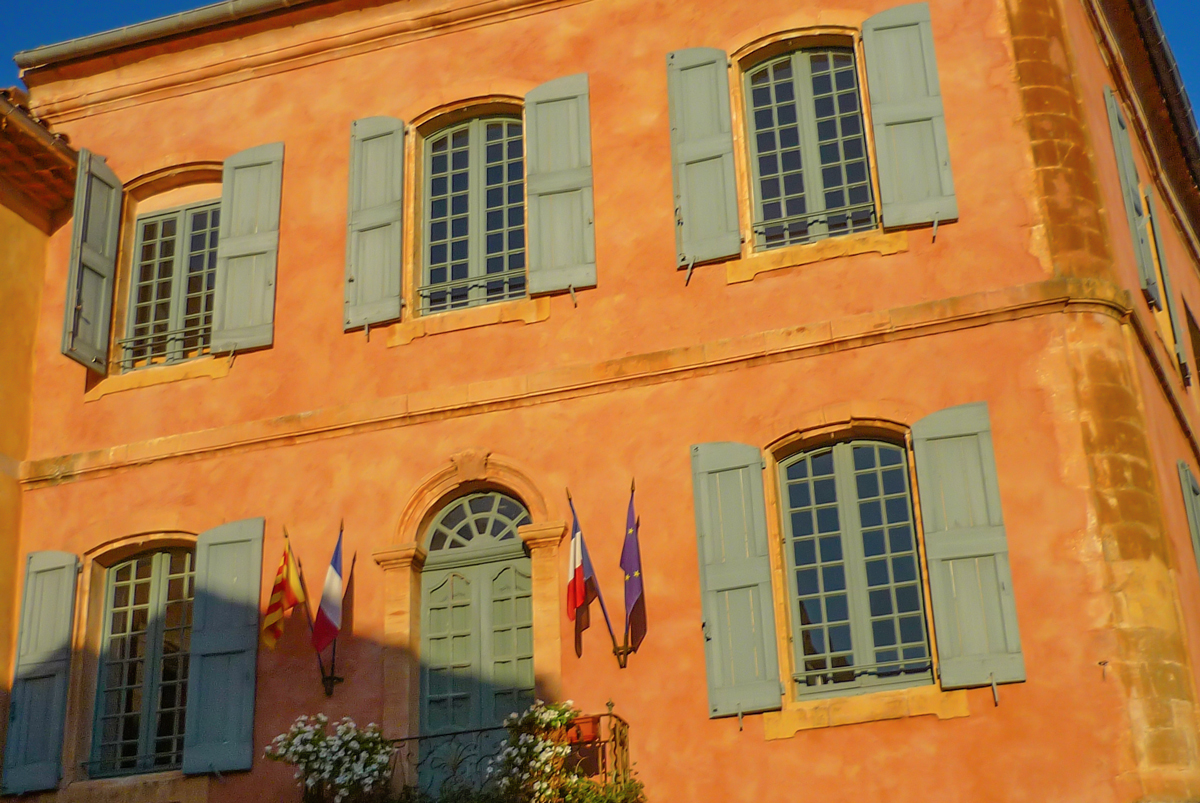 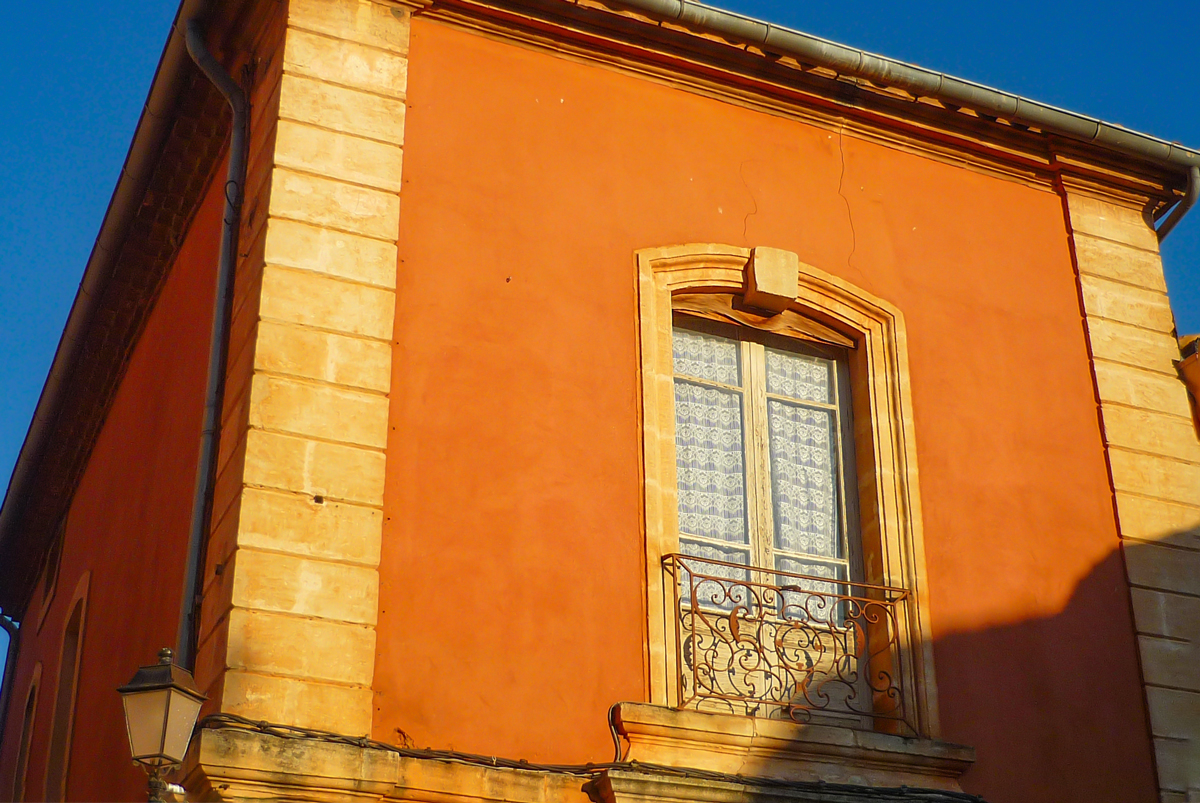 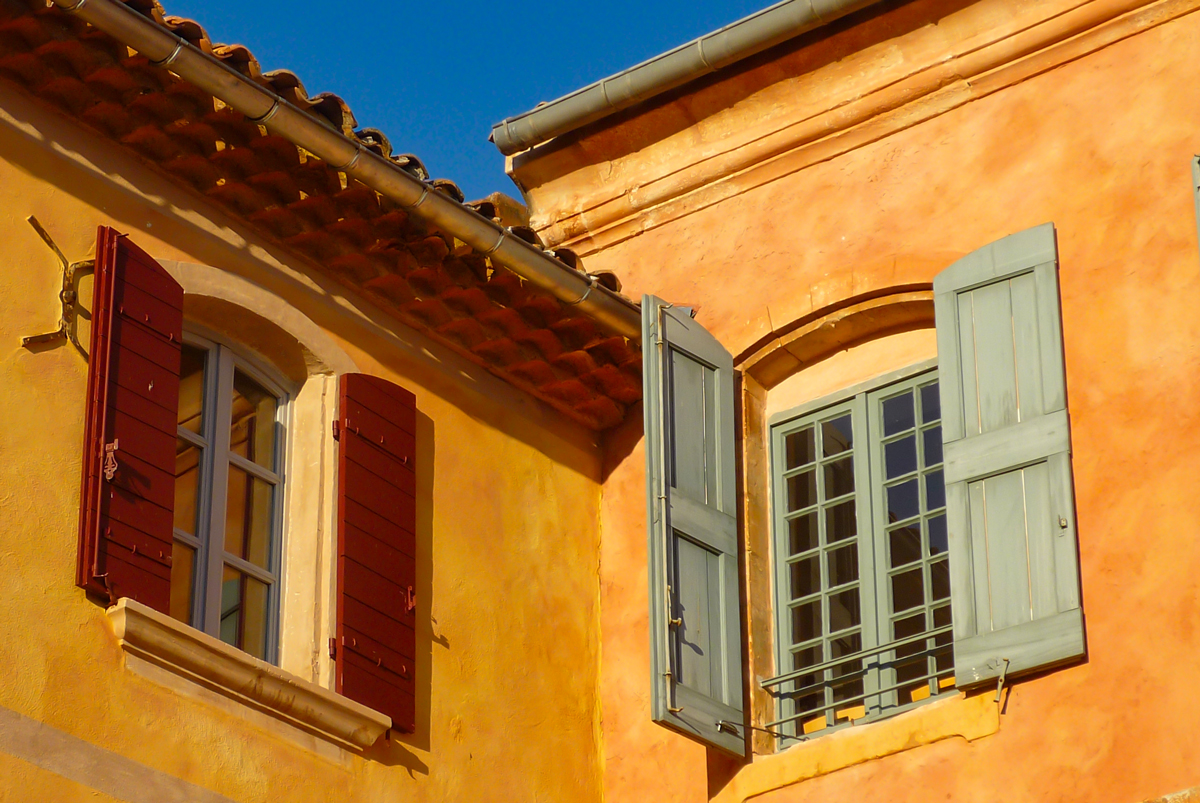 This is the old gateway to the Castrum (the fortified wall). The belfry was remodelled in the 19th century as an annexe to the church. 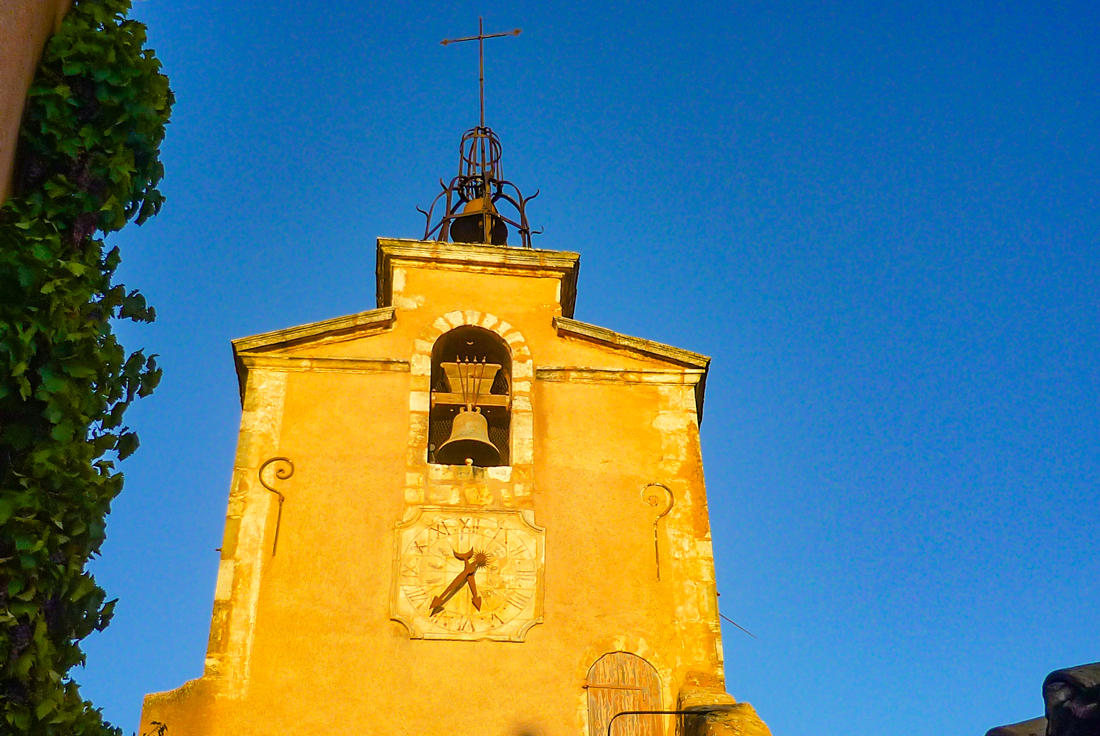 The Belfry of Roussillon © French Moments

The first alley, on the left, leads to the old covered way, which once joined two towers of the ramparts. The district has kept the name "quartier de la Bistourle" (bistourle = two towers). Admire the beautiful view over the village and the surrounding area. 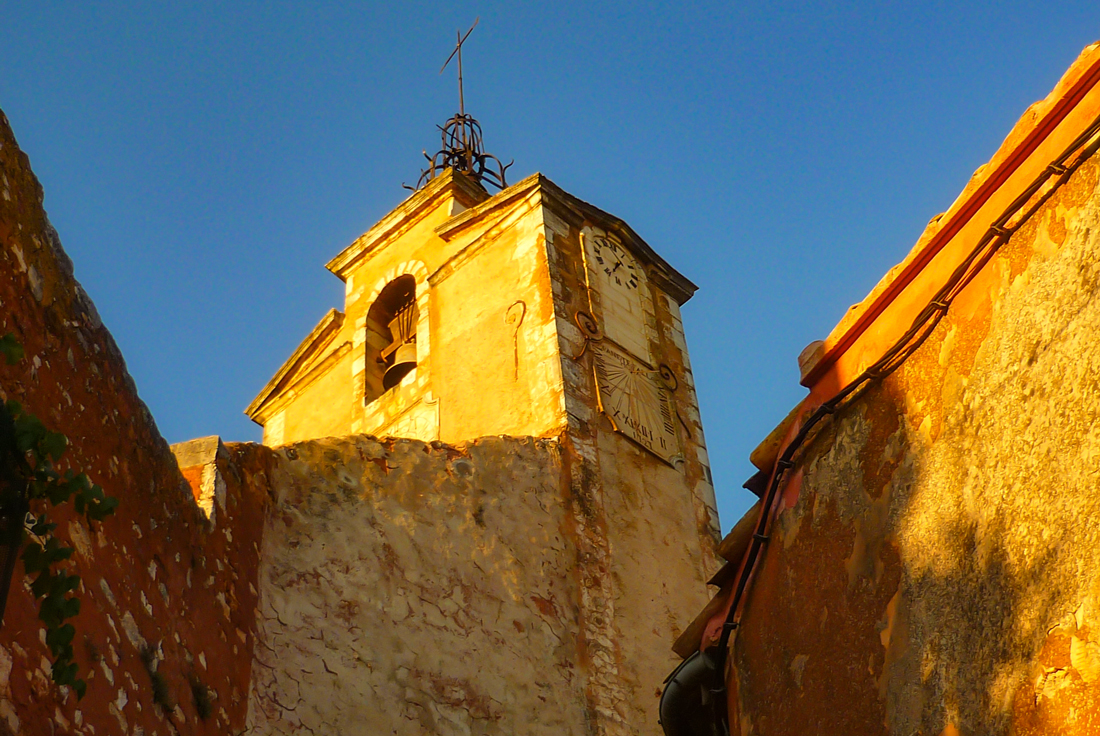 The Belfry of Roussillon © French Moments

The original church dated back to the 11th century and was located inside the fortifications, facing the castle and the cliff. Its façade dates from the 17th century, and its choir from the 18th century. 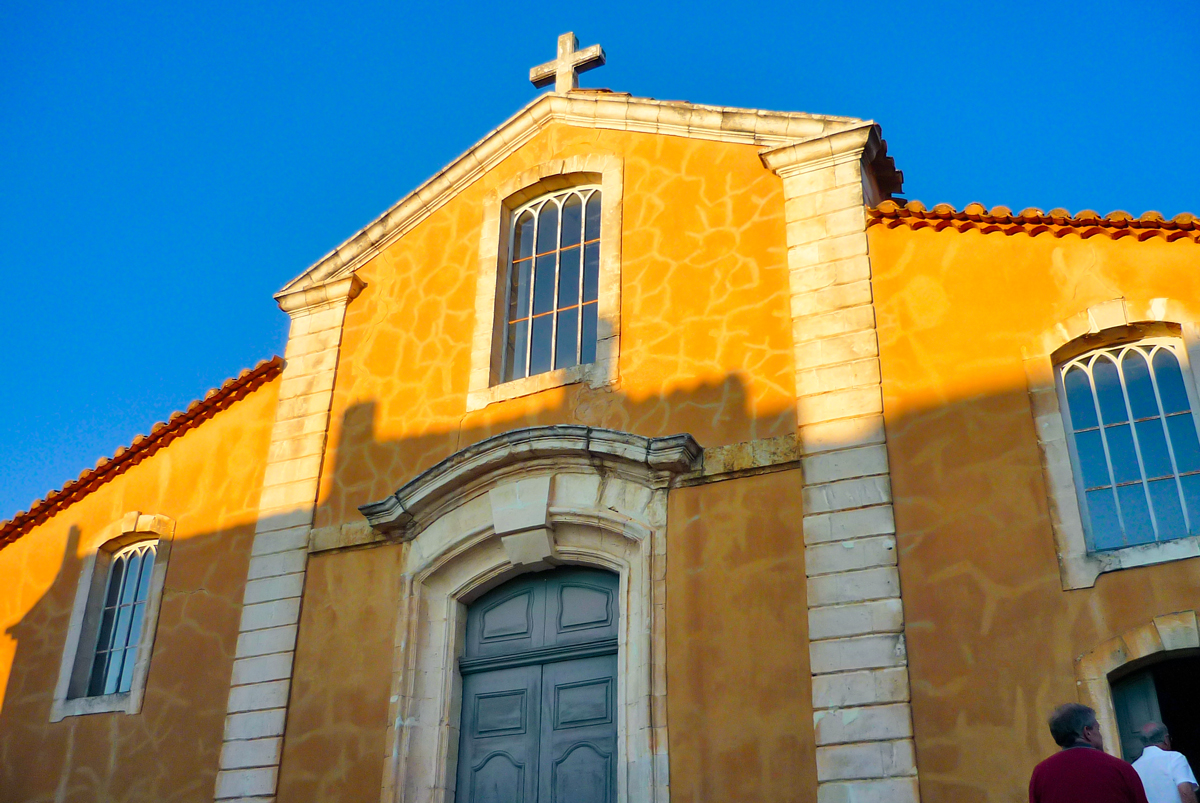 The square is located on the supposed site of the castle's courtyard (edified in 987), of which some remains and a small calvary remain.

This is the highest point in the village, from where you can see a vast panorama from the Luberon to the Monts de Vaucluse. 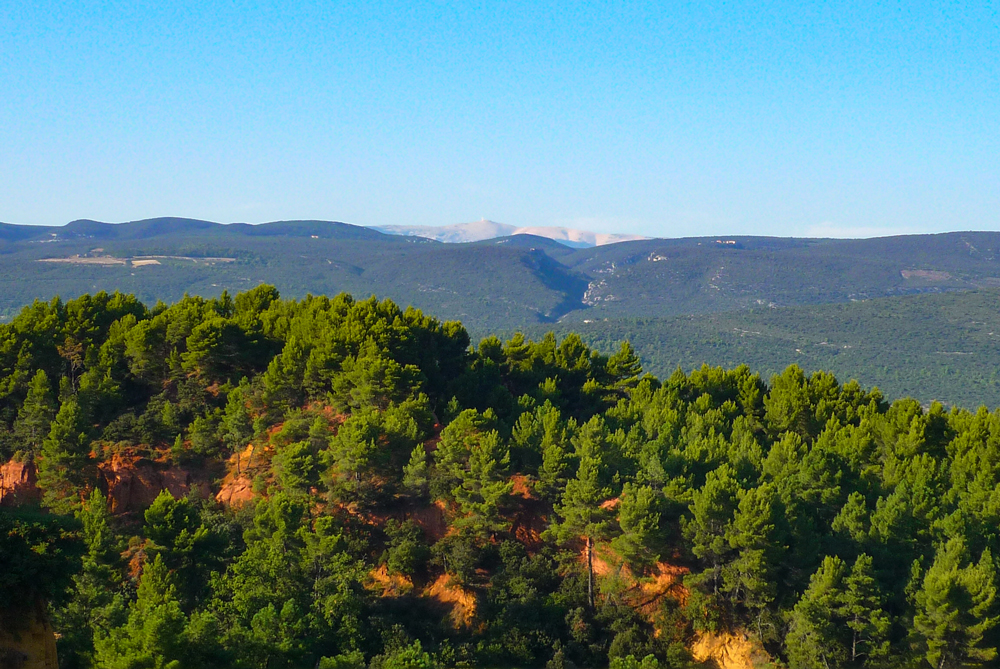 Have a peek at the village cemetery to see the ochre tombstones. 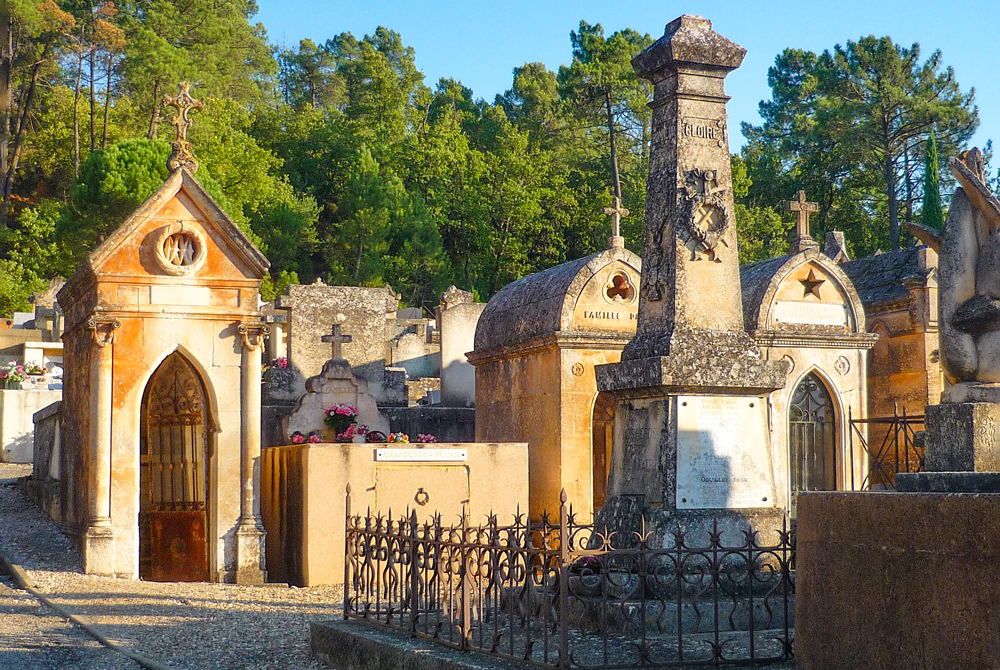 The cemetery of Roussillon with its ochre tombstones © French Moments

To enjoy a beautiful view of Roussillon, come in the morning via the following two roads:

The village appears at the top of a steep hill where the red of the ochre is gradually revealed in the middle of the deep green of the pine forests.

The ochre quarries of Roussillon are made of great pigments ranging from yellow and orange to red. The mining of ochre has left its mark on the facades of Roussillon’s houses, and a stroll through the village at sunrise or sunset will reveal stunning colours. 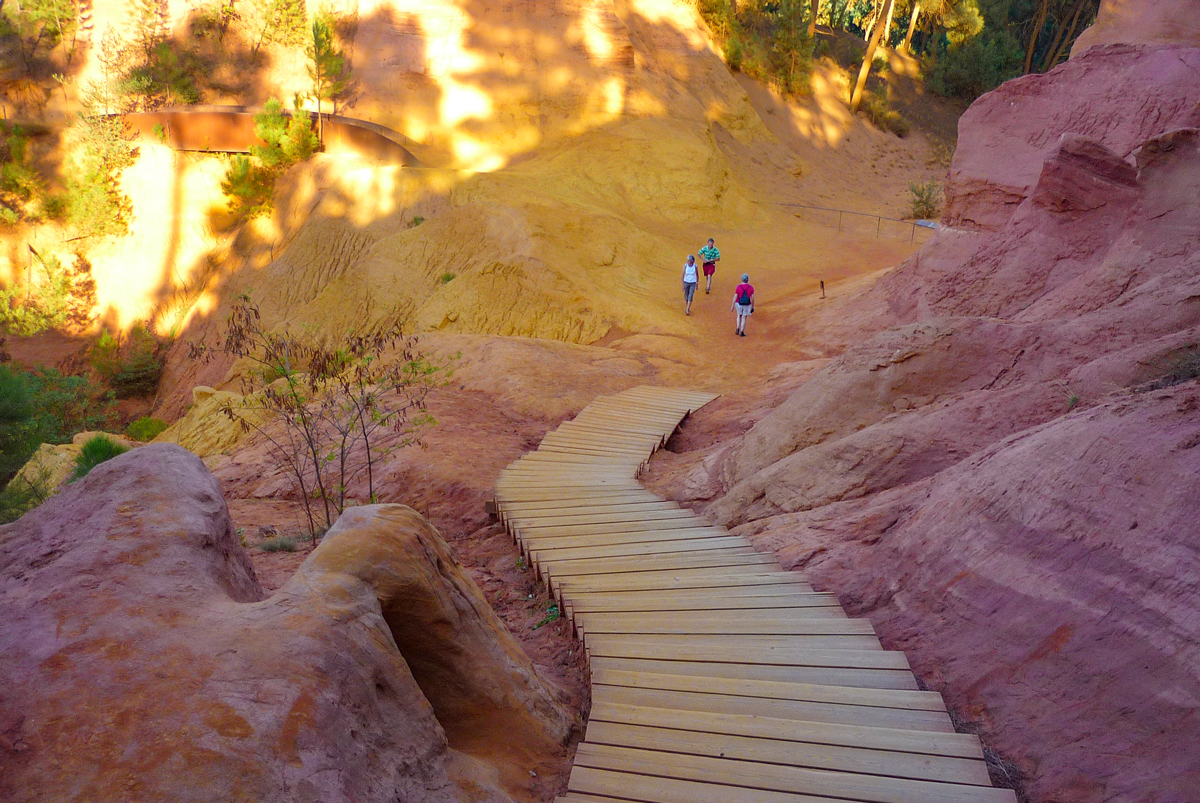 Going down hill on the ochre Pathway in Roussillon © French Moments

The “Sentier de l’ocre” (ochre path) leads you through the old ochre quarries. If this astonishing landscape is the result of natural erosion by the wind and the rain, it has been accentuated by human hand which has cut deep galleries to extract the ochre. 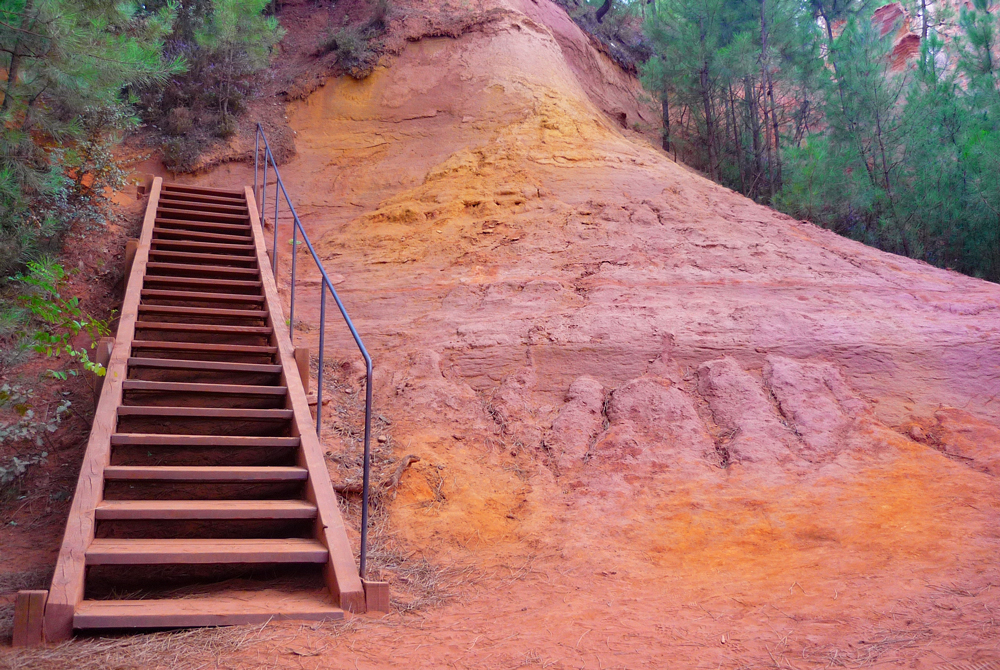 The path of the ochre © French Moments

In 1780, the colouring effect of ochre was discovered in Roussillon by Jean Etienne Astier, hence turning the peaceful village into a leading site of ochre production. 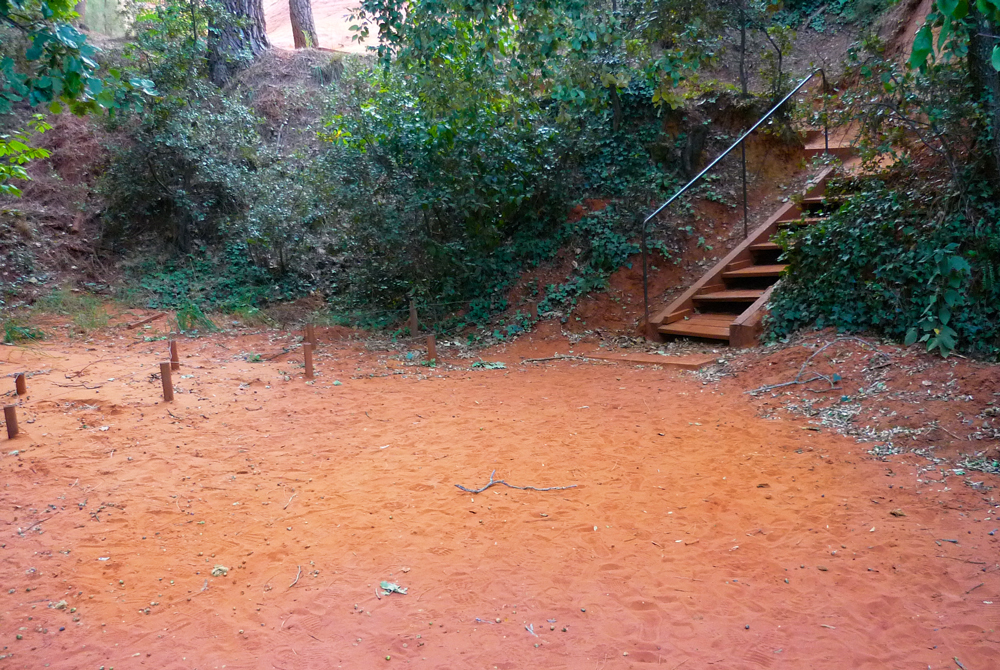 Down the ochre path © French Moments 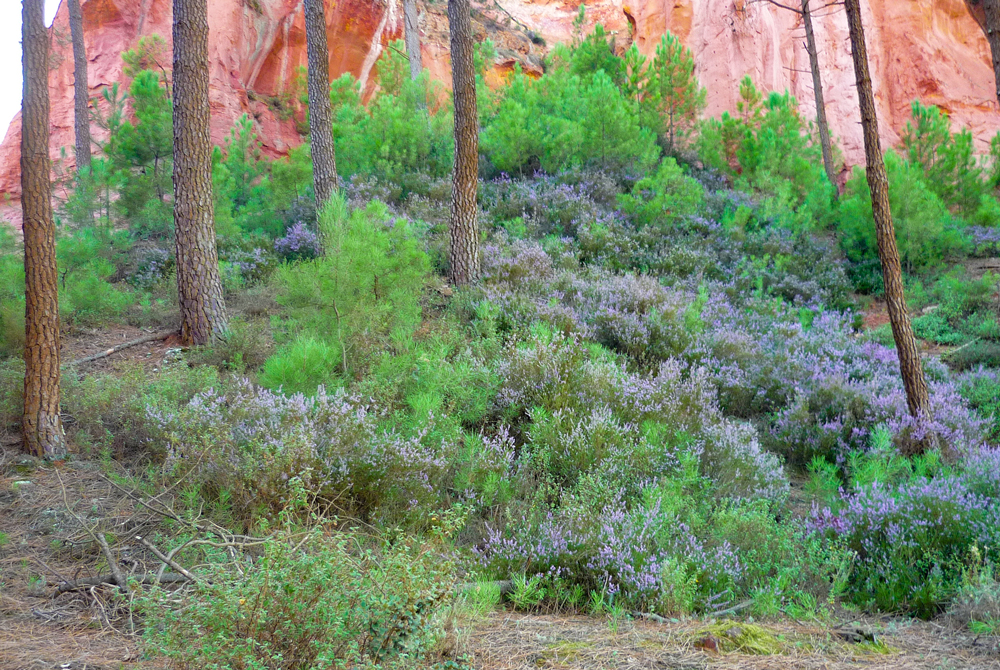 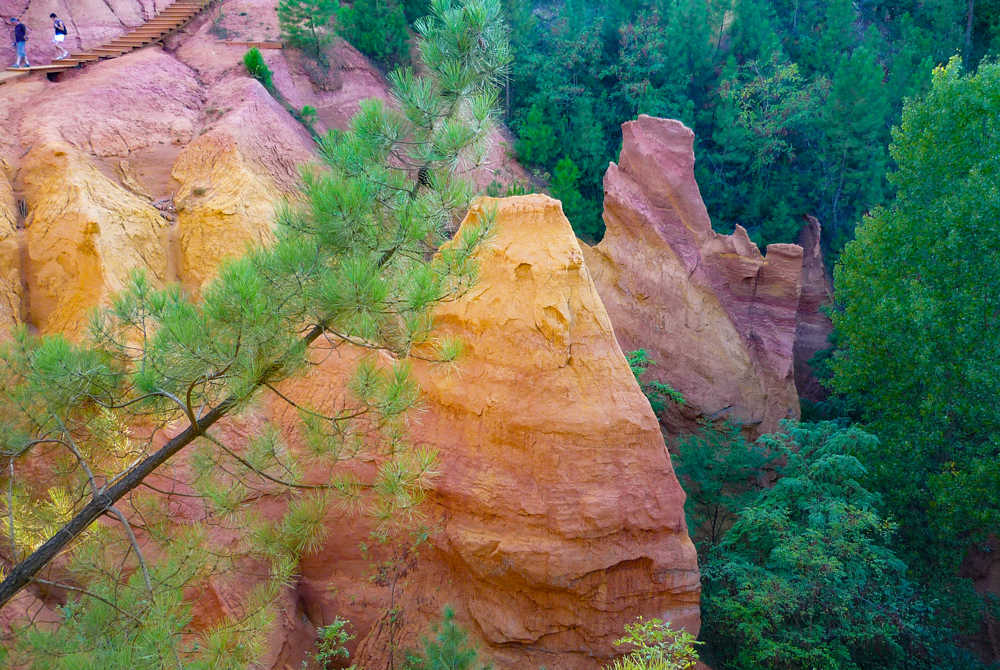 The beautiful colours of the ochres of Roussillon © French Moments 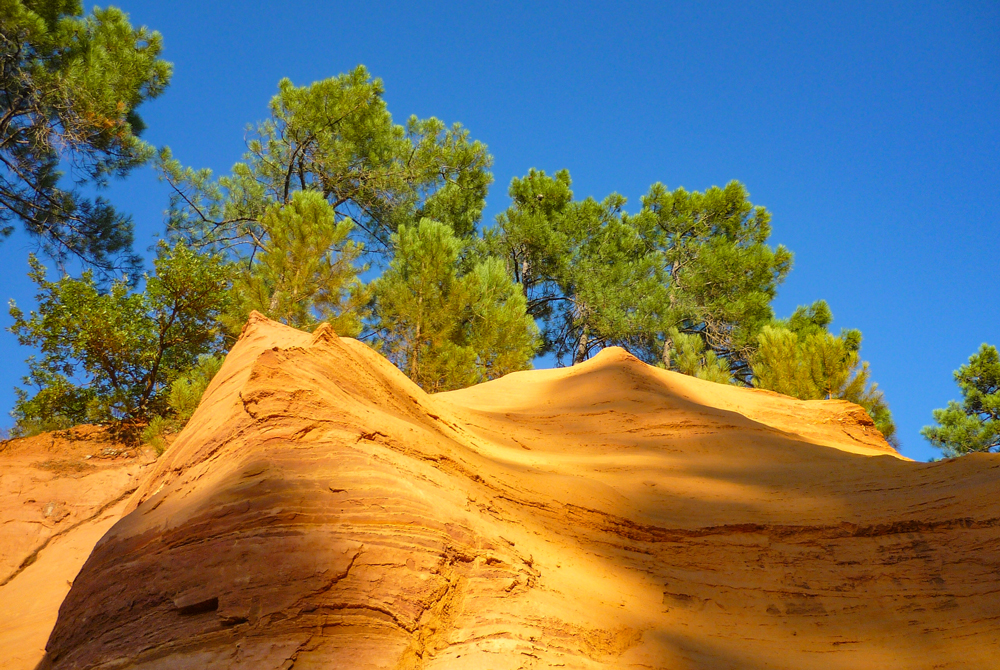 A low angle view of the ochre © French Moments

The legend of Lady Sirmonde

The legend behind the distinctive coloured ochre of Roussillon tells us a rather tragic story. Once upon a time, Lady Sirmonde, neglected by her husband, who was away too often, fell in love with Guillaume de Cabestan. When Sirmonde’s husband, Lord Raymond of Avignon, learnt about her infidelity, he plotted to kill Guillaume while hunting. Once Guillaume was dead, Raymond dug up his heart and gave it to the cook to be served to his wife. When Lady Sirmonde learnt about this terrible deed, she told him:

“You offered me such a good meal that never again will I wish to eat”. 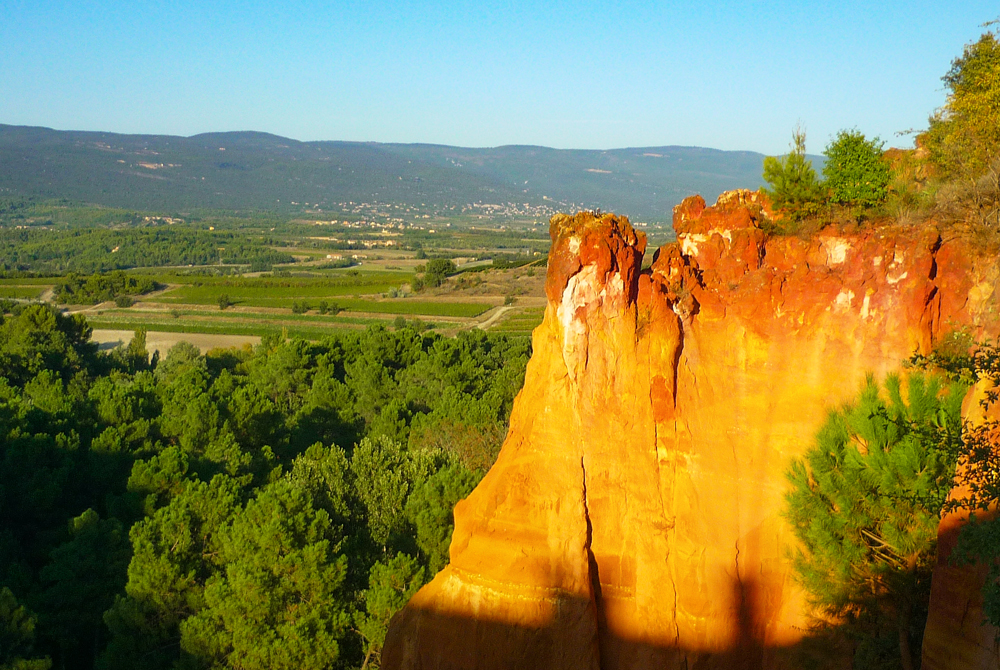 When Raymond threatened her with his sword, she escaped and, in her flight, accidentally fell off the cliffs and died. The legend says that her blood had coloured the landscape of Roussillon forever. 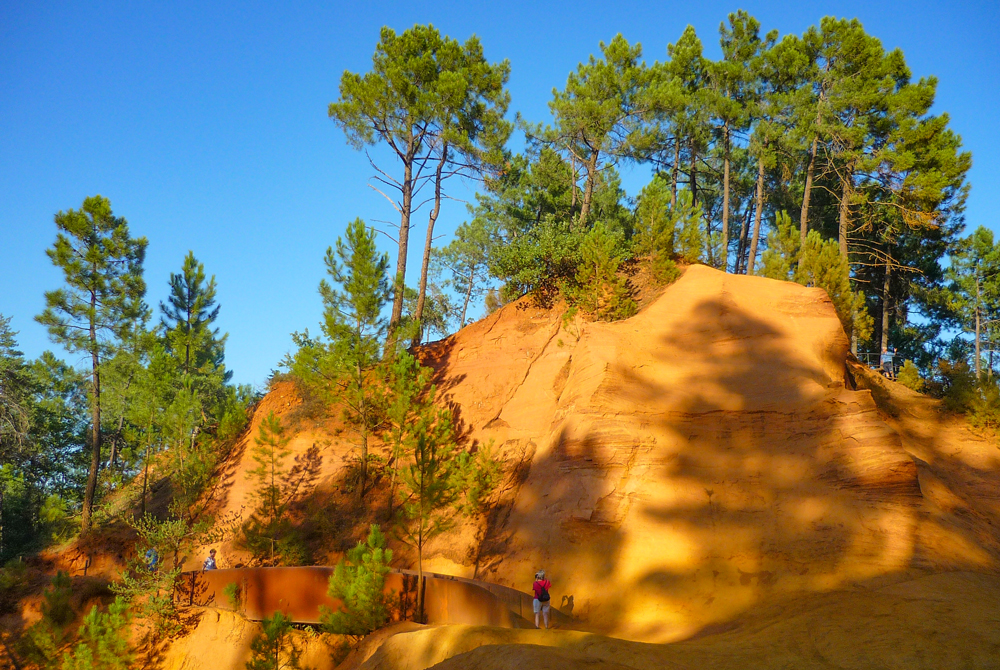 The ochre of Roussillon © French Moments

Find out more about Roussillon

How to get to Roussillon

Roussillon is located at :

From Aix-en-Provence, reach Pertuis via the A51 motorway then follow the D973 to Cadenet and the D943 / D36 via Lourmarin and Bonnieux. Follow the D149 and D108 to Roussillon.

Coming from Marseille and Salon-de-Provence, take the A7 motorway, exit at Cavaillon and join the D900 to reach Roussillon.

The nearest airport is Marseille-Provence. It is possible to reach Cavaillon by bus or train. From Cavaillon there are local bus routes to Roussillon.

Roussillon has a high capacity for holiday accommodation. The commune has several hotels, including five three-star hotels, many bed and breakfasts (covering all price ranges), several estate agencies offering seasonal rentals, gîtes and a three-star campsite.

Click here to book your accommodation in the Luberon or browse the map below:

On the blog and other websites

Here are some pages from our blog and other websites to find out more about this Provencal destination.

What to do in the Luberon

Be inspired by a list of things to do in the Luberon:

Have you been to Roussillon? Share your experience by commenting below! 🙂