As soon as France’s second-largest fair (Foire Saint-Romain) closes its doors, another popular event is about to start in the old Ducal town of Rouen, Normandy, as part of the Christmas festivities: the Rouen Christmas Market. Let’s find out why you should visit it! 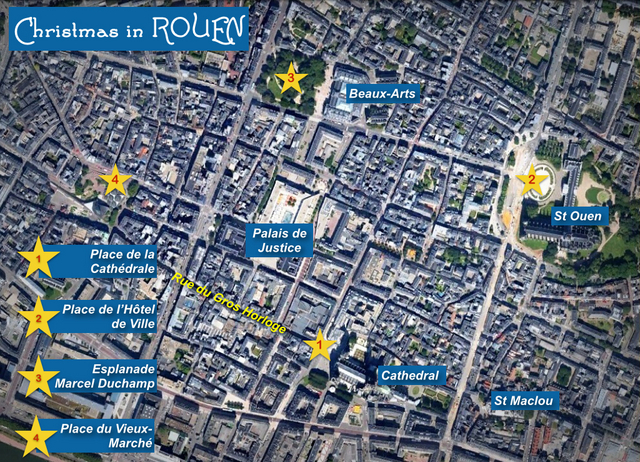 The Christmas market is the most important event during Advent in Rouen. With the Christmas event called “Rouen givrée” (Frosted Rouen), the Normand city offers several cultural events: games, concerts, music and shows for children. You can explore the streets of the old town under magical lights while visitors and locals alike have fun at the ice-skating rink on Place de l’Hôtel de Ville or the Ferris Wheel on Place du Vieux-Marché.

The Rouen Christmas Market is open from 24 November to 25 December 2022.

More than 80 sites and streets in Rouen are magically lit up for Christmas.

The pedestrianised street of Rue du Gros Horloge, which connects Place du Vieux-Marché to the Place de la Cathédrale, is Rouen’s main shopping area and forms the spine of the town. You’ll find some fine half-timbered houses around the monumental astronomical clock (the “Gros Horloge“).

Other places lit up are the Place Gaillarbois and the Rue du Bac.

Over 150 street performances are organised during Advent in the old town of Rouen.

From the square, the lofty Gothic Cathedral of Rouen appears in all its glory, with the Tour Saint-Romain to the left and Tour de Beurre to the right.

This large square is bordered by the classical façade of Rouen’s City Hall and the lofty Saint Ouen Abbey with its 82 m tall-high bell tower.

Every year since 2009, a 400 m2 ice-skating rink has been set up on the square. This famous “frozen lake” (lac gelé) welcomes more than 20,000 people during the four weeks of Advent. The site also includes a fun 35 m sledge track.

The Jardin des Neiges (Snow Garden) is located on the vast wooded esplanade in front of the Fine Arts Museum. Set up as an enchanting village, it hosts several activities for children, such as storytelling and creative workshops.

With its picturesque half-timbered houses, restaurants and the modern church of St Joan of Arc, Place du Vieux-Marché is one of Rouen’s main squares. Initially set on Place de la Cathédrale, the tall and trendy Ferris wheel is back in Rouen in Advent 2013 after a two-year absence. The view from the Ferris wheel offers a breathtaking panorama over the roofs of Rouen, the bell tower of Gros Horloge, the Cathedral and the Gothic churches of St Maclou and St Ouen.

Very close to the square lies the little yet charming Place de la Pucelle, bordered by half-timbered houses painted in bright colours. The square used to host a Christmas market in the past, and it is unsure whether the chalets will be back in 2013.

The city of Rouen, sprawled along the River Seine, has remained an important trading centre between Paris and the English Channel.

The historic city centre of industrial Rouen is surprising for the first-time visitor who can stroll through its fascinating heritage made up of gothic churches and mansions, restored half-timbered houses, and well-maintained public gardens… nicknamed the “City of 100 bell towers” by French writer Victor Hugo, the capital of the Dukes of Normandy has undergone a costly upmarket restoration of its old town centre, largely pedestrianised.

Find out more about the sites and monuments to discover in Rouen.

There are approximately 15 daily trains from Paris Gare Saint Lazare to Rouen, taking only 1.10 hours. Travelling by train from Paris is the easiest way to discover Rouen on a day trip.

Rouen can also be easily reached from Paris (135 km) by the Autoroute de Normandie (motorway A13) within 1.40 hours and from the harbour town of Le Havre, from where ferries link Southern England.

If you are travelling from Australia or America, the best way to reach Rouen is to take a flight to Paris Charles de Gaulle airport and take a train from Paris Gare Saint Lazare or to hire a car and drive from there.