The banks of River Seine (Quais de la Seine) in Paris have been listed by Unesco as a World Heritage Site since 1991. Along the Seine are found some of Paris’ most famous monuments and landmarks: the Eiffel Tower, the Louvre, Notre-Dame, the Conciergerie, the City-Hall, the Bibliothèque François Mitterrand… Let’s follow the course of the Seine!

The Quais de la Seine: a bit of history

From the 9th to the 19th centuries, bridges were built in Paris, and the city’s banks were established by raising quays and drying the marshlands.

Little by little, the original appearance of the river was transformed by human development. Banks were built up either side of the river which narrowed it but kept its significant role as a centre of urban activity.

Water-related activities and houses are concentrated along its banks.

The Seine: a historic part of Paris

The Seine has always played a historic part in the making of Paris.

Dating back to when the Parisii tribe first established a fishing village along its banks, the waters of the River Seine have always been the heart and soul of Paris.

The construction of the quays started in 1312 when King Philip IV (the Fair) commissioned the development of today’s Quai des Grands Augustins (Left Bank) in the interest of the river trade. The example was soon followed on the Right Bank with the layout of Quai de la Mégisserie and Quai des Célestins.

King François I in 1530 and King Henri IV at the beginning of the 17th century had the discontinued quays connected to each other with the constructions of additional quays.

On the Île de la Cité, the first developed quays appeared much later (between 1580 and 1600) as its ports were of less importance.

The quays of the Seine

In the 19th century, the quays were restructured to feature two levels: the “quais hauts” (high quays) and “berges” (low quays).

In the 1960s, a controversial development of the quays introduced expressways on the low quays in favour of car traffic.

Today, the Paris authorities are inclined to limit car access along the Seine. Significant efforts have been initiated from the 1990s to reclaim the banks of the river back for pedestrians.

Romantic Paris: my new eBook is out!

Order your copy now and get inspired by over a hundred beautiful photos! 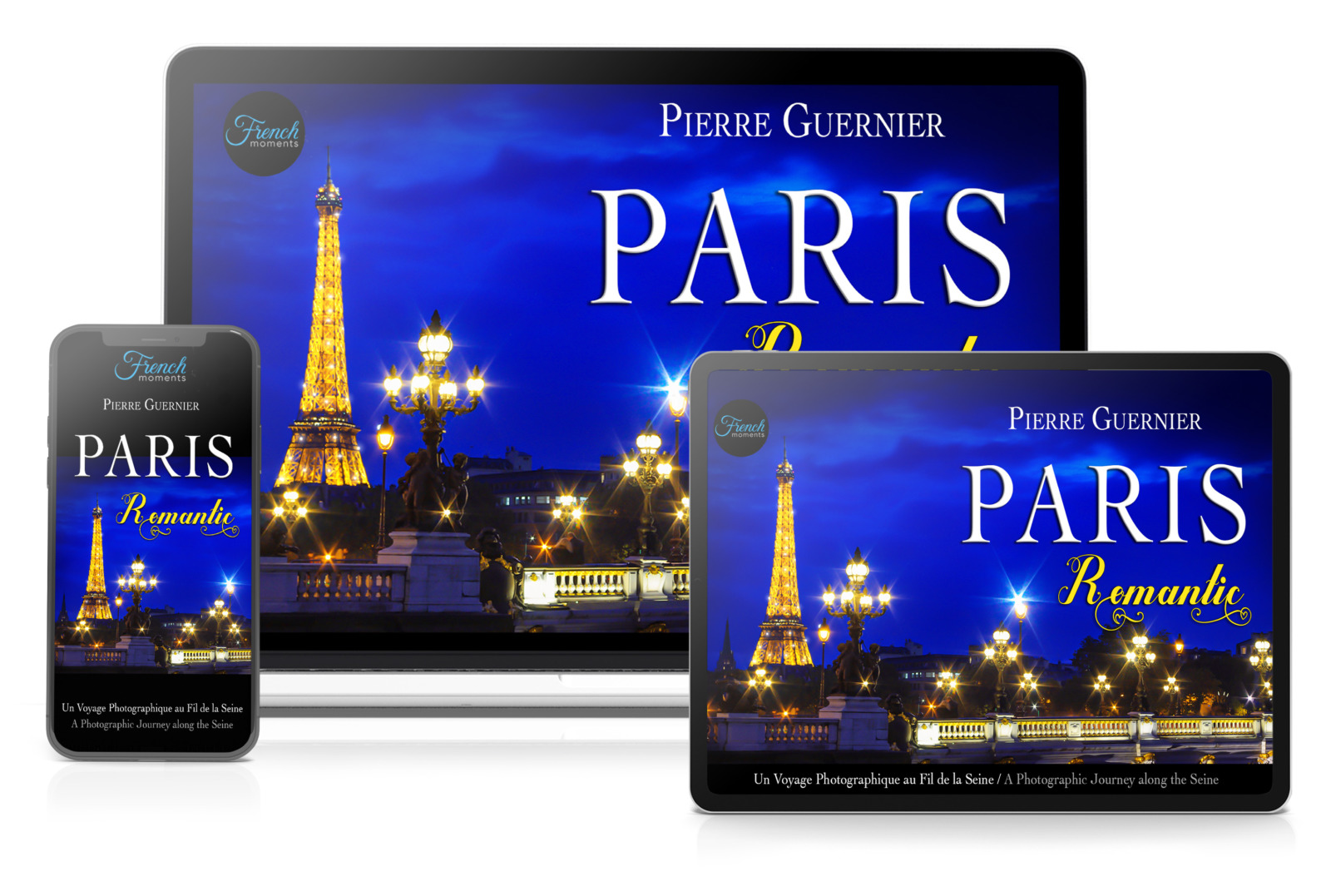 My new ebook is a collection of 115 photos taken along the banks of the River Seine, with 30 inspiring quotes in English and French.

The Seine in Paris

The River Seine rises at Source-Seine in the Langres Plateau, 30 km northwest of Dijon, Burgundy. 776 km long, it crosses Troyes, Paris, and Rouen before flowing into the English Channel at Le Havre. Over the centuries the Seine has become an important commercial waterway within the Paris Basin, particularly between Paris and Le Havre.

The Seine runs through Paris on a curve over 13 kilometres long cutting the city into two parts: the Left Bank (rive gauche) and the Right Bank (rive droite). With a depth varying between 3.40 m and 5.70 m and a width between 30 and 200 m, the river is crossed by 37 bridges, including 4 footbridges.

The Banks of the Seine in Paris

For nearly 2 km, the river is bordered on both sides by double-decker quays. Lined above by knobbly plane trees and below by cool, green poplars, the quays are wonderful places for walking and picnics. The most impressive part of the banks is found around the two islands of Île de la Cité and Île Saint-Louis.

The ship-shaped island is the historical heart of Paris which was known as Lutetia (Lutèce) during the Roman era. It is linked to the Right and Left Banks by eight bridges, and a ninth leads to the smaller Île Saint-Louis.

Find out more about the Île de la Cité.

The calm little Île Saint-Louis has nothing in common with its larger neighbour Île de la Cité.

Named after King Louis IX (Saint-Louis), it includes no great monuments except a few interesting mansions such as Hôtel Lambert. Nevertheless, the island is appreciated for its beautiful quays and peaceful residential district in the centre of Paris.

Find out more about Île Saint-Louis.

The Banks of the Seine in Paris became a UNESCO World Heritage Site in 1991. The listed area extends over 365 hectares between Pont de Sully and Pont de Bir-Hakeim including their surroundings.

The protected zone also covers the islands of Île de la Cité and Île Saint-Louis, and 23 of the 37 bridges across the Seine in Paris. It includes some of Paris’ most famous monuments such as the Eiffel Tower, the Hôtel des Invalides, the Louvre, and Notre-Dame. 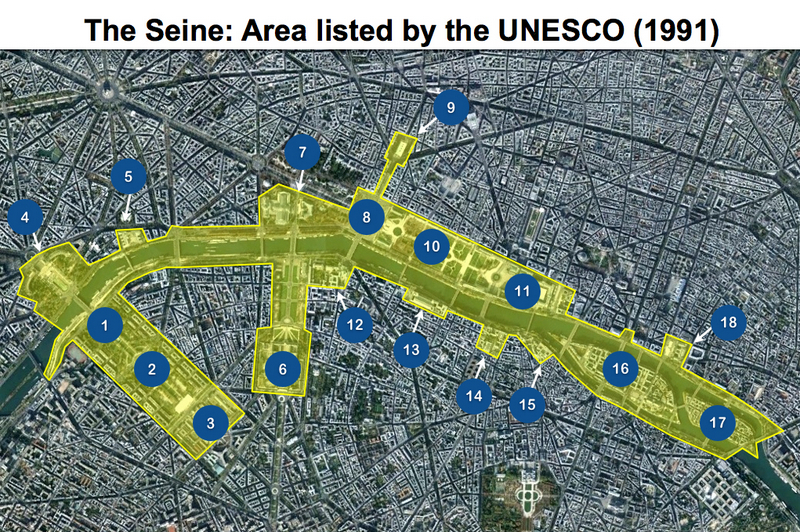 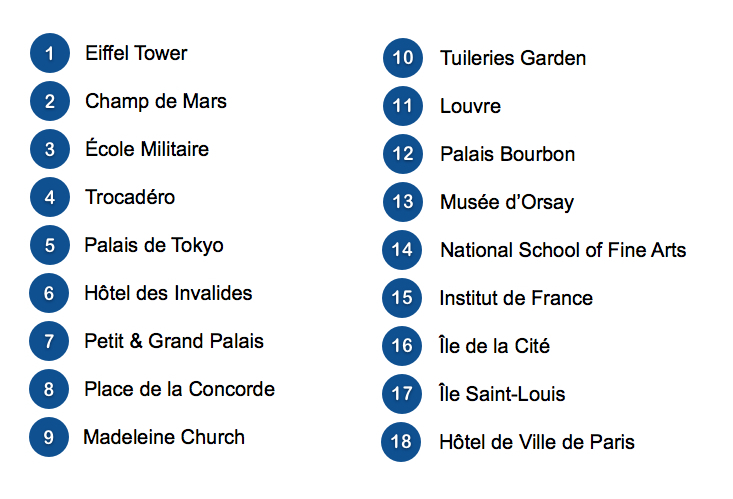 UNESCO justifies the listing by the distinction between two parts of the Seine in Paris, upstream and downstream:

“Upstream, beyond the Arsenal, begins Paris the port and river transport town; downstream is the royal and subsequently aristocratic Paris, which had only limited commercial activity. It is this latter section of the city that was selected for the World Heritage List. The powerful hand of the state is extremely visible here through its constructions and the legislation in effect.

A geographical and historic entity

It can be seen how the site and the river were gradually brought under control with the articulation of the two islets, Île de la Cité and Île Saint-Louis with the bank, the creation of north-south thoroughfares, installations along the river course, construction of quays, and the channelling of the river.

Similarly, although the successive walls of the city have disappeared (the ramparts of Philip-Augustus, Charles V, and the Fermiers Généraux), their traces may be read in the difference in size and spacing of the buildings (closer together in the Marais and the Île Saint-Louis, more open after the Louvre, beyond which are a greater number of major classic constructions laid along three perpendicular axes:

The ensemble must be regarded as a geographical and historic entity. Today it constitutes a remarkable example of urban riverside architecture, where the strata of history are harmoniously superposed.”

Book a cruise to see the most beautiful bridges of Paris!

Fancy discovering the bridges from the river once the pandemic’s over? Book one of the following cruises with our partner Tiqets.

Choose from a daytime promenade to a dinner cruise!

The bridges of Paris

No less than 37 bridges span the Seine in Paris. Five of them are pedestrianised and two are rail bridges (métro and RER).

The Left and Right Banks of Paris are linked by eight bridges to Île de la Cité and four to Île Saint-Louis. One bridge (Pont Saint Louis) links the two islands to each other.

The list below takes an inventory of all the bridges from upstream to downstream of Paris with the year of construction and/or re-construction: 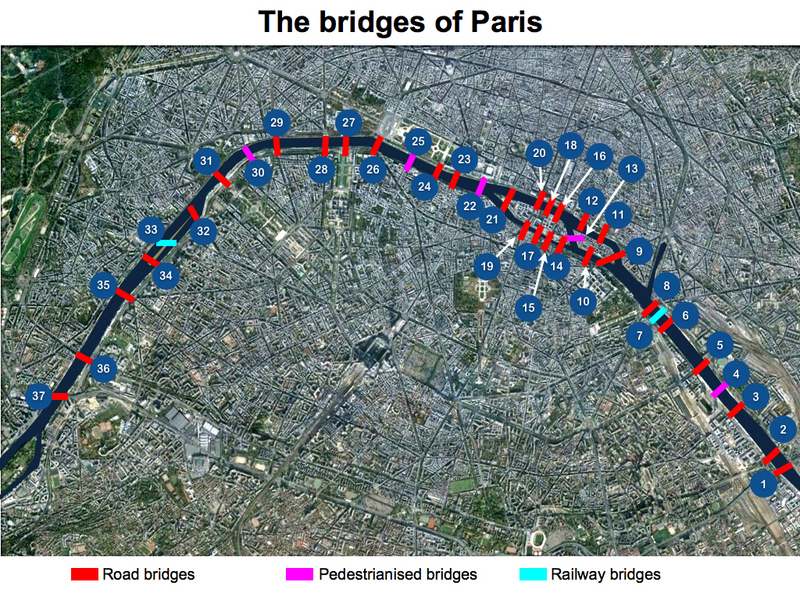 The Bridges of Paris Book

If you are interested in learning more about the bridges of Paris, check out this beautiful coffee table book: Bridges of Paris by Michael Saint James. We love it and our copy of the book is set on a favourite part of our bookshelves at home! Order your copy on Amazon (affiliate link):


The Bouquinistes of Paris

The banks of the Seine would not be the same without the established “bouquinistes”. The booksellers and their green painted boxes have truly become one of the many iconic symbols of Paris.

It was once said that the Seine is the only river in the world that runs between two bookshelves!

Always in the open air during any weather :

“by the wind, the rain, the frost, the snow, the fog, and the great sun, that they end by looking much like the old statues of cathedrals”

Find out more about the Bouquinistes of Paris.

Quotes about the Seine and Paris

Victor Hugo, The Hunchback of Notre-Dame

look at the light through that surprising host of steeples, towers, and belfries;

pour forth amid the immense city, break against the points of its islands, compress within the arches of the bridges, the current of the Seine, with its large patches of green and yellow, more changeable than a serpent’s skin;

define clearly the Gothic profile of this old Paris upon a horizon of azure, make its contour float in a wintry fog which clings to its innumerable chimneys;

drown it in the deep night, and observe the extraordinary play of darkness and light in this sombre labyrinth of buildings;

throw into it a ray of moonlight, which shall show its faint outline and cause the huge heads of the towers to stand forth from amid the mist;

or revert to that dark picture, touch up with shade the thousand acute angles of the spires and gables, and make them stand out, more jagged than a shark’s jaw, upon the copper-coloured sky of evening.

“Paris is the city in which one loves to live. Sometimes I think this is because it is the only city in the world where you can step out of a railway station—the Gare D’Orsay—and see, simultaneously, the chief enchantments: the Seine with its bridges and bookstalls, the Louvre, Notre Dame, the Tuileries Gardens, the Place de la Concorde, the beginning of the Champs Elysees—nearly everything except the Luxembourg Gardens and the Palais Royal. But what other city offers as much as you leave a train?”

Vicente Huidobro, The Cubist Poets in Paris: An Anthology

Here’s a little selection of photos I took during my visits to Paris… photos taken in all seasons, from early morning to night-time!