New posts
You are at:Home»Blog»Promenade in Sartrouville

On the first day of May I took my little girl with me on a promenade in Sartrouville across the River Seine. This 7 kilometre walk led us to a local gem, a thousand year old church surrounded by an orchard and vineyards. We ended our walk at the peaceful public garden of Parc du Dispensaire.

A beautiful promenade in Sartrouville

The first day of May is known as Fête du Travail in France and is a public holiday. Well this year it did not make any difference as it fell on a Sunday. After many days of rain and cold weather the sun was back to the Paris region and I decided to bring my little girl along to a promenade in central Paris.

When I checked the timetable of the RER A train from Maisons-Laffitte, I found out that there was no train operating to Paris. Not because of a strike (remember this is Labour Day !) but for track work on the bridge spanning the Seine River. 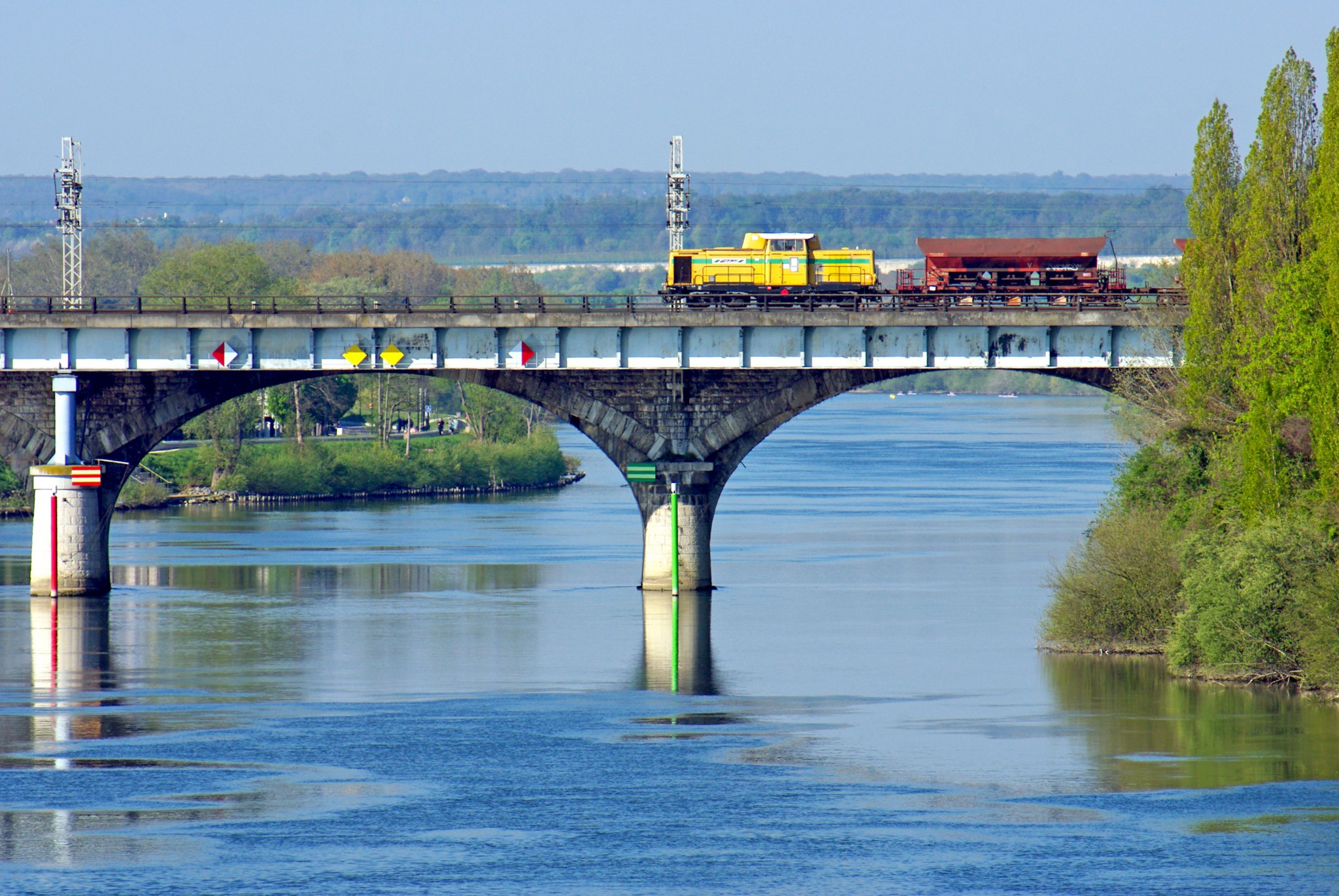 No bus either to Saint-Germain-en-Laye and I was left with the option of a stroll in the forested area of Maisons-Laffitte or… to the neighbouring commune of Sartrouville. It just so happened that I heard of an ancient church sanctuary and this was a good opportunity to check out on it.

We left our residence at 9.15am and the first stage of our walk was to reach the bridge spanning the River Seine which connects Maisons-Laffitte to Sartrouville. Then we turned left on the rue de Stalingrad. 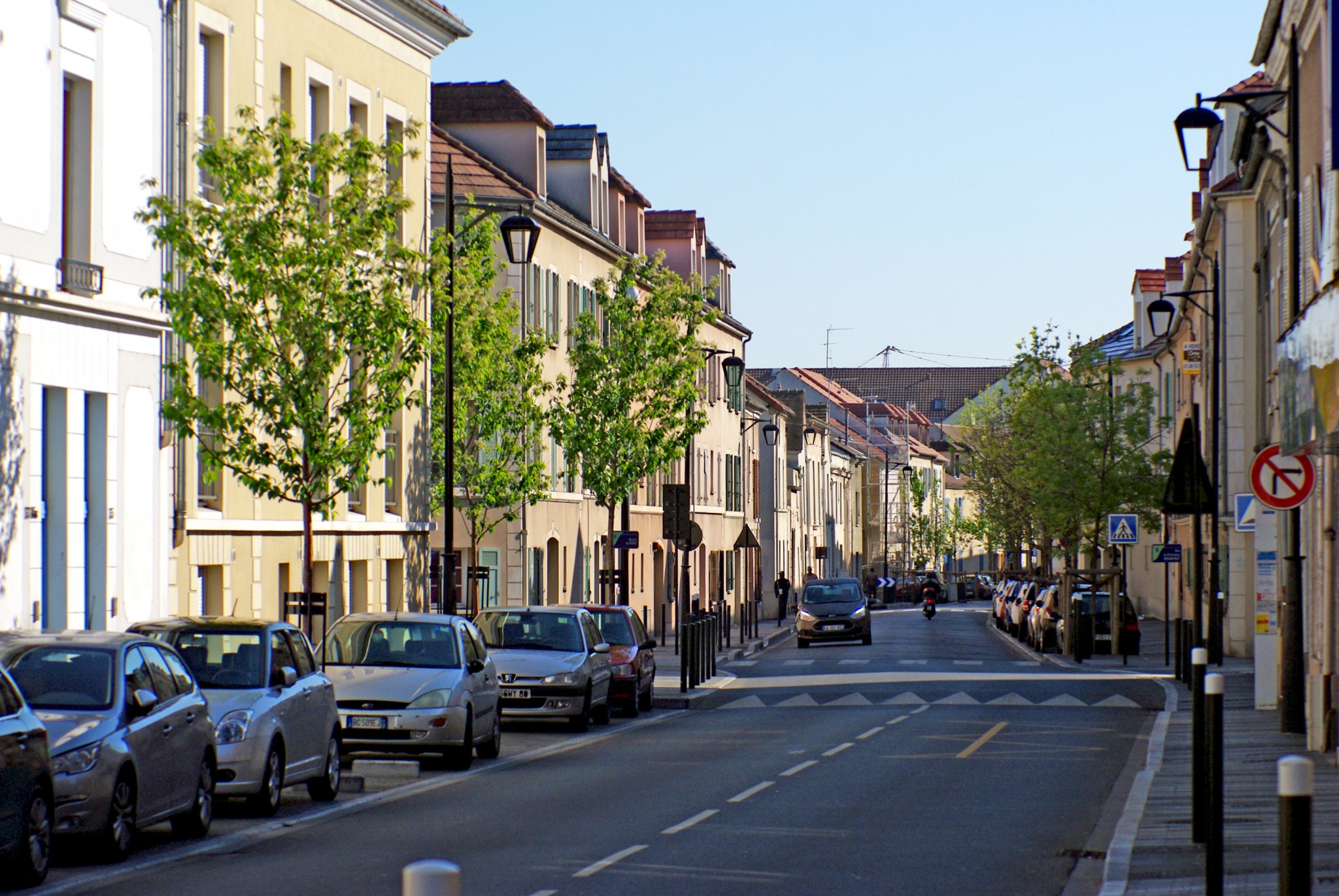 We did not feel sharing the Soviet cause and decided to switch to the neighbouring rue du Président Roosevelt (lol!). On that street I noticed this beautiful window frame… 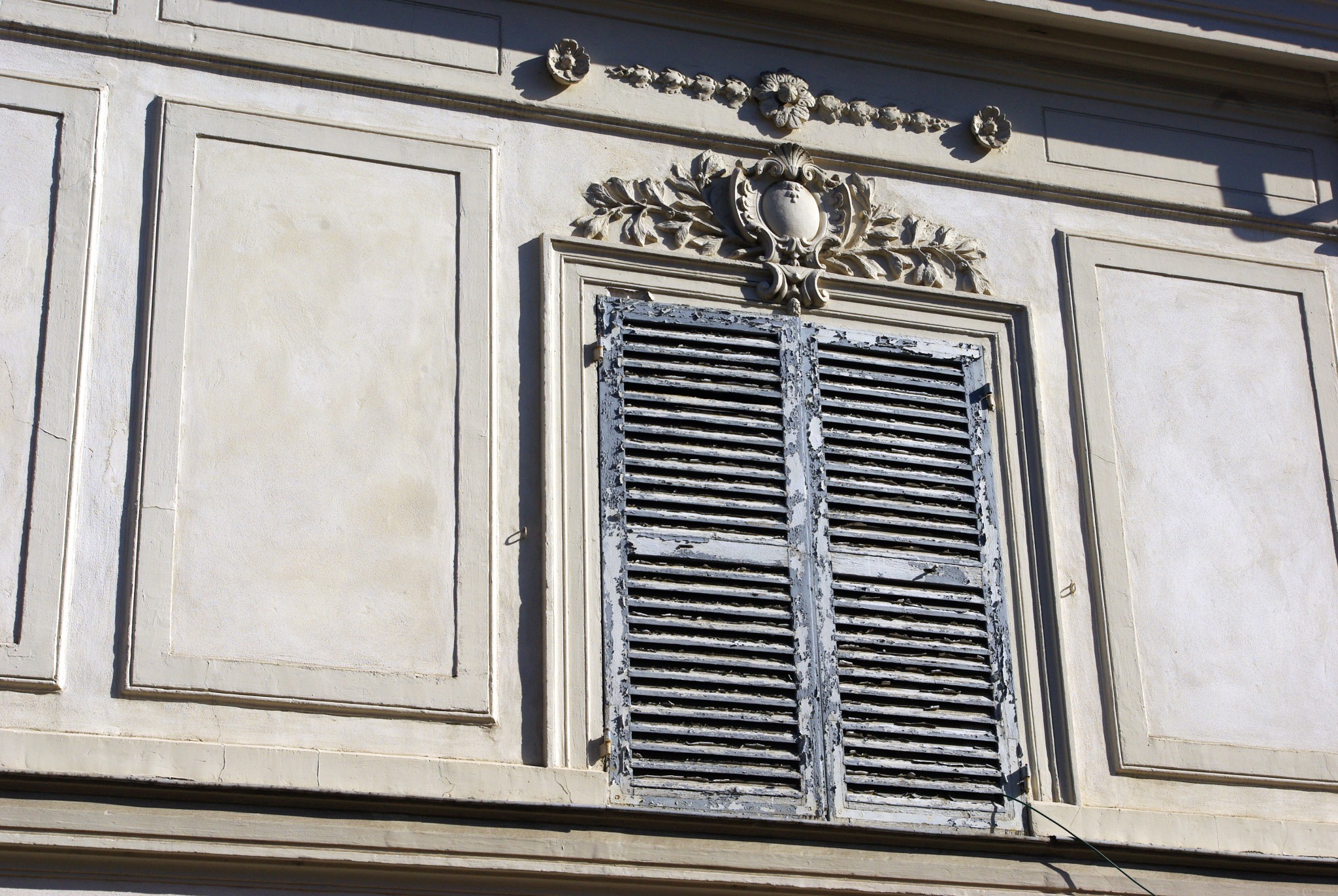 … and this lovely manor house: 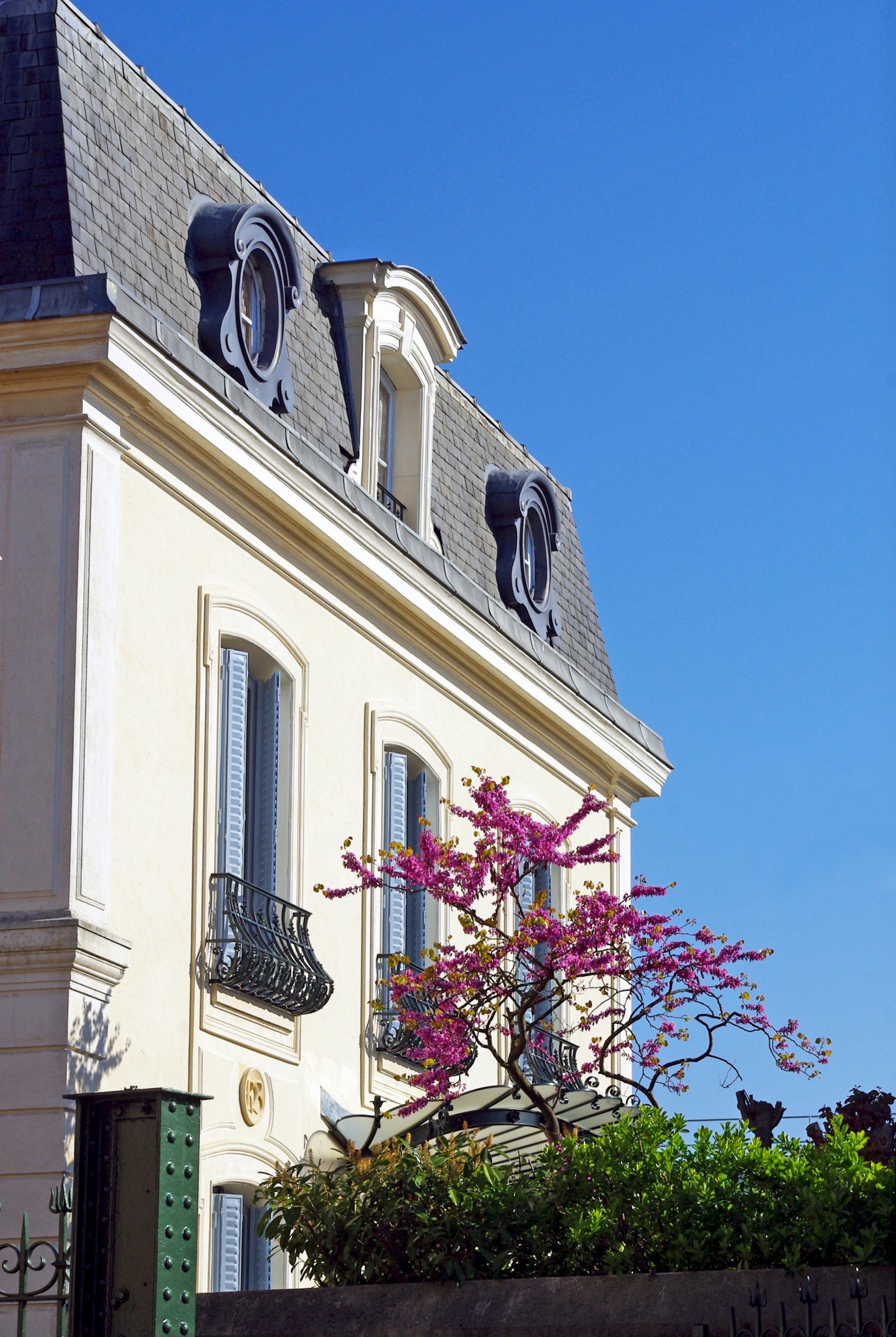 Not far from the old church, on the rue Jean Mermoz, a devoted young fellow was selling the traditional bunch of lily of the valley… without too many success. Maybe 10am was too early in the morning and people had not gone out yet. 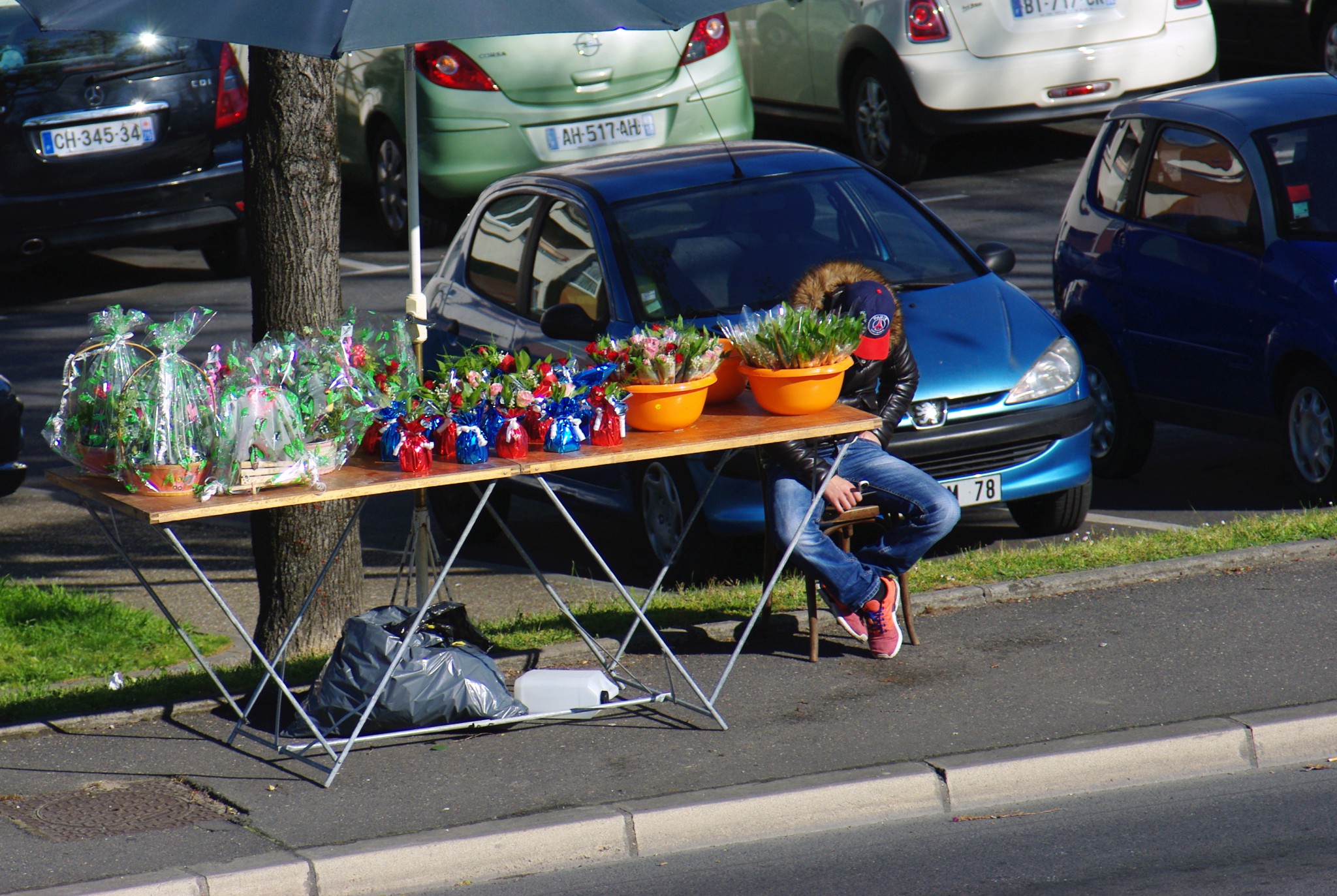 From the terrace of the cemetery above the rue Jean Mermoz I admired a view of the castle of Maisons-Laffitte I was not used to. 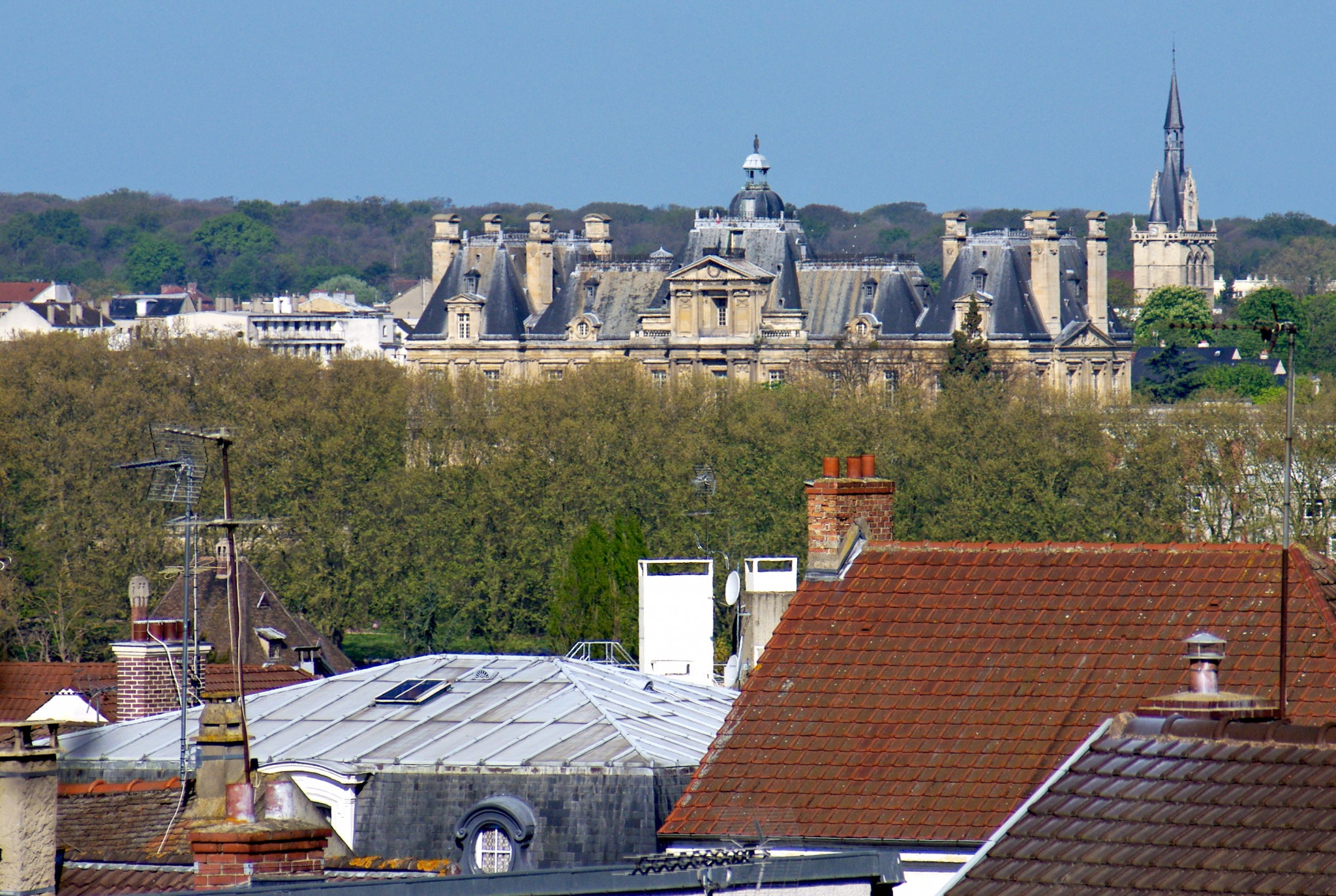 Behind the old church dedicated to St. Martin of Tours there is an area free from construction between the boulevard de Bezons and the avenue du Général de Gaulle. In Spring this place is dotted with stunning trees in flowers. This perfect setting is enhanced by the stone spire of the ancient sanctuary. 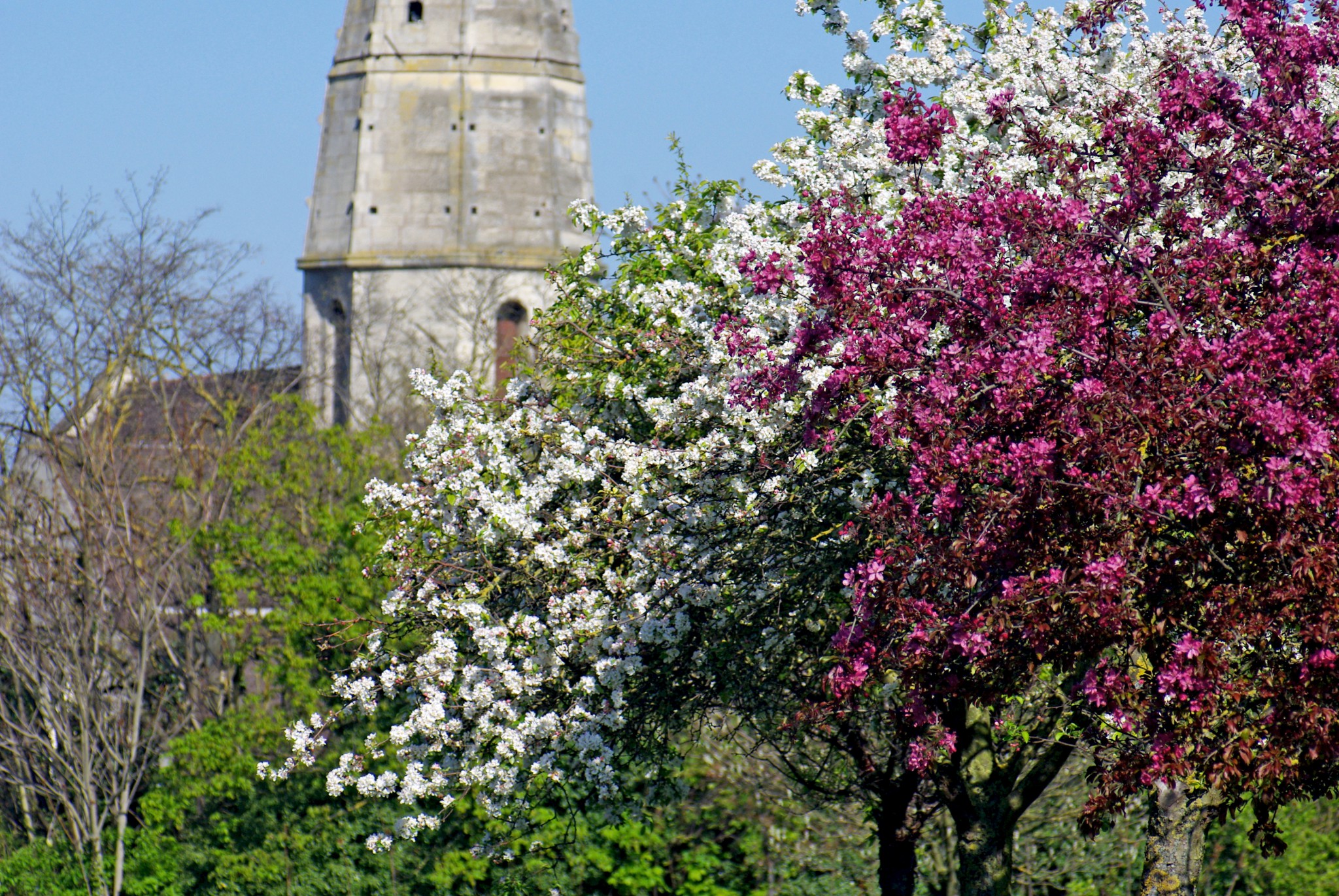 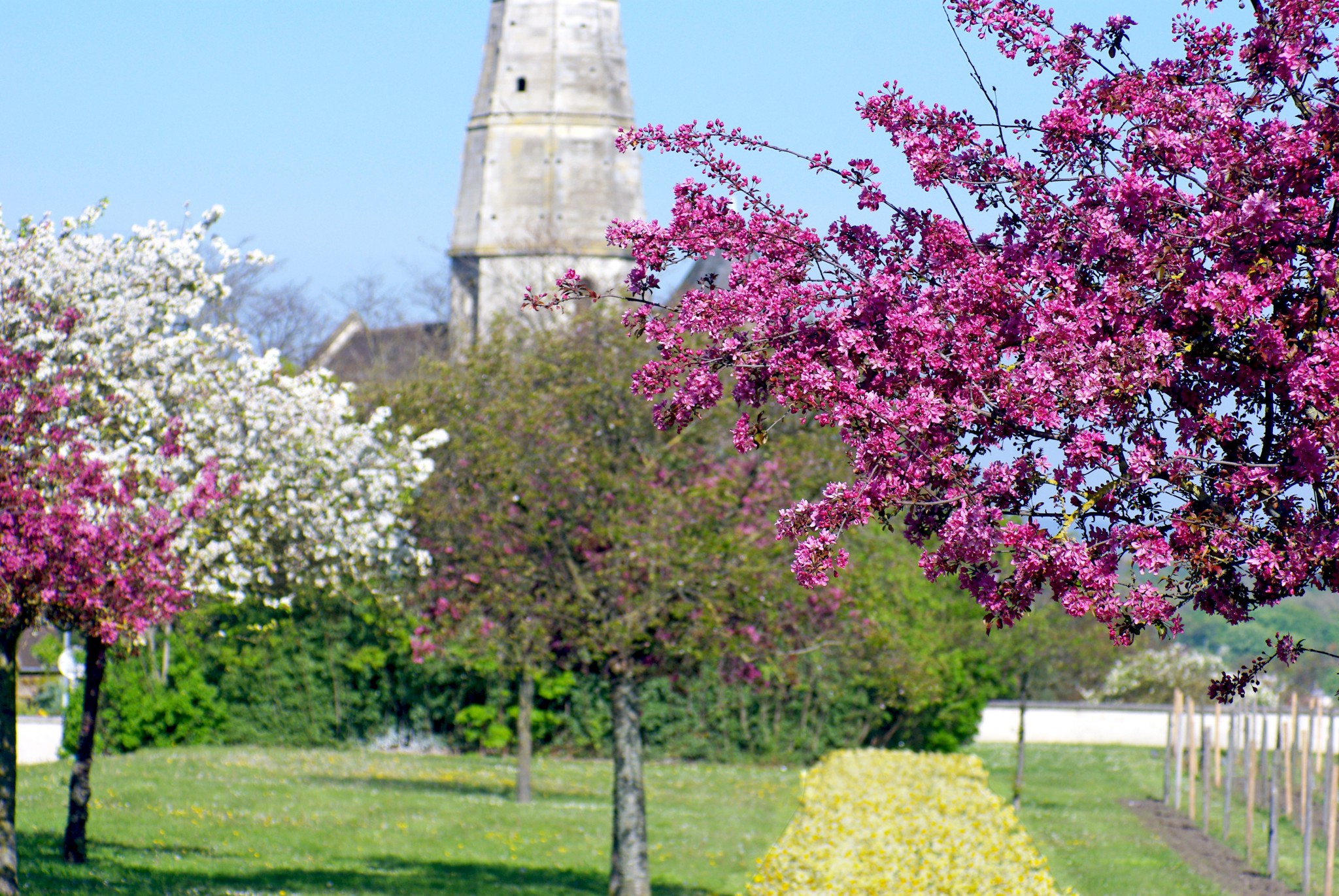 Sometimes it is hard to believe we were only 15 km from Paris as the crow flies: 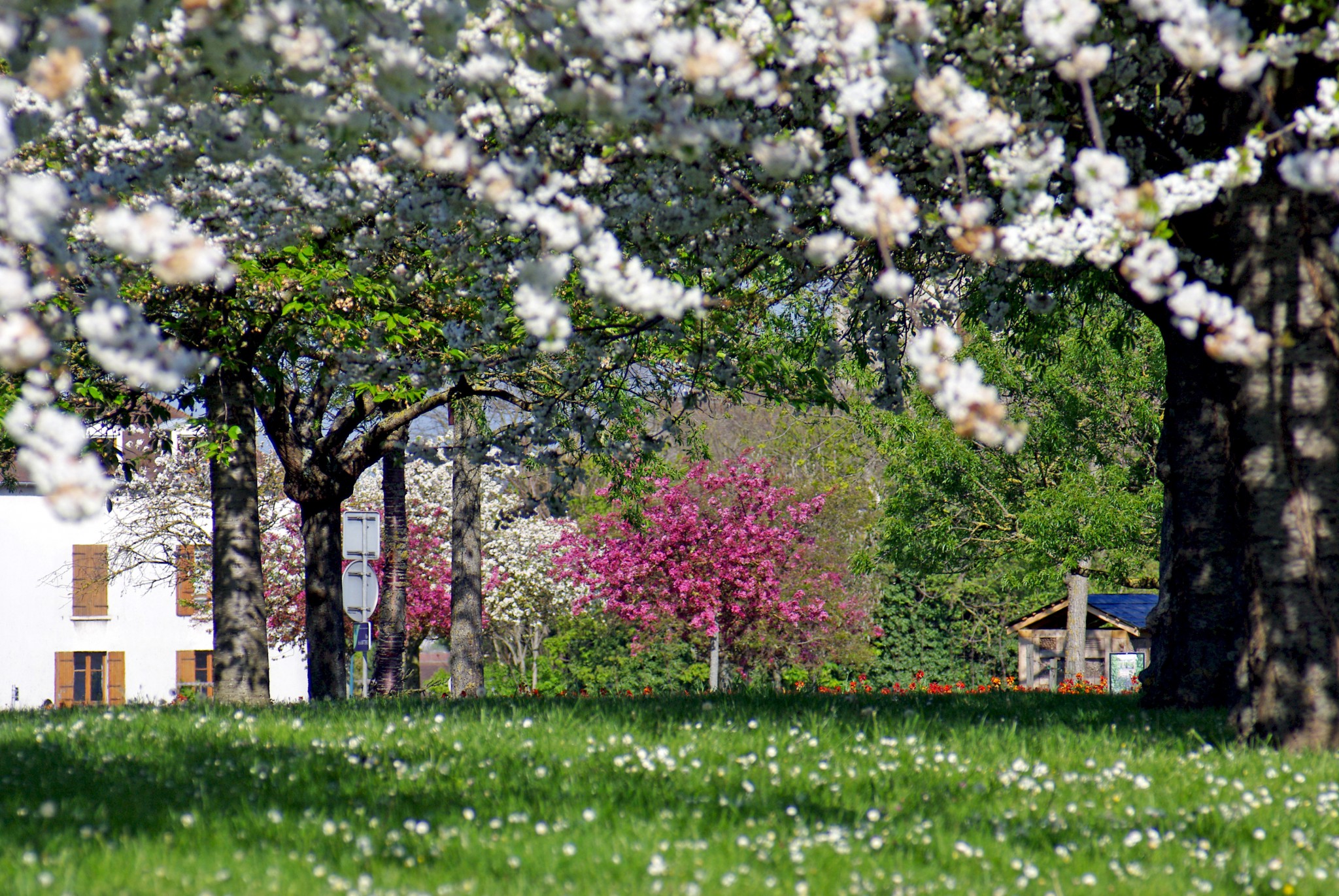 One of the few ‘Insects Hotels‘ which have been set up in Sartrouville. Just for your information an insect hotel is a manmade structure created from natural materials intended to provide shelter for insects. 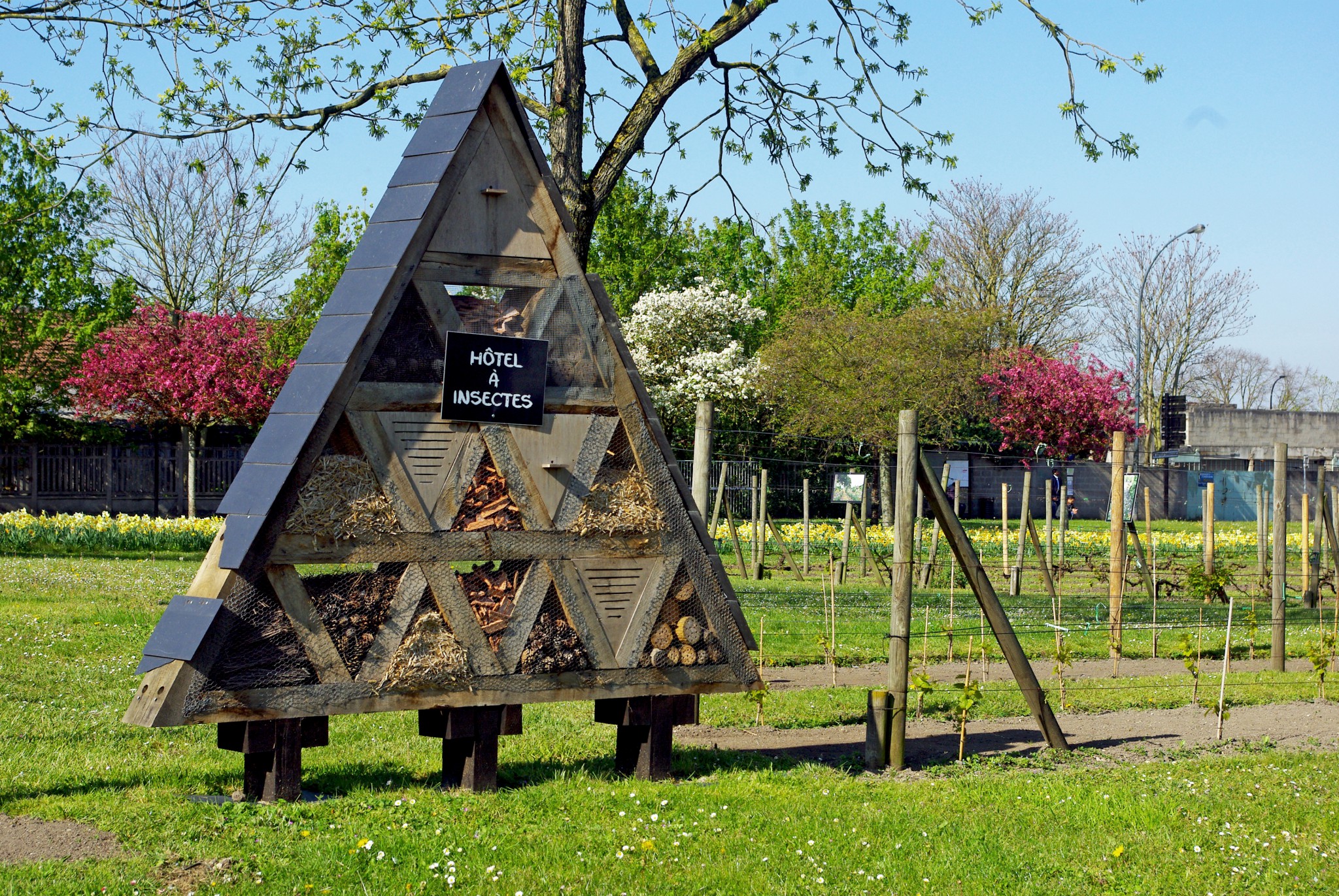 I was also surprised to spot a vineyard. Until the end of the 19th century the site of Sartrouville was mainly dedicated to vine cultivation. The wine grape industry in the Paris region was devastated because of phylloxera but also greatly suffered from the direct competition with rail. Indeed new rail lines were opened to the South of France and led in a fierce wine competition which disadvantaged the Île de France. 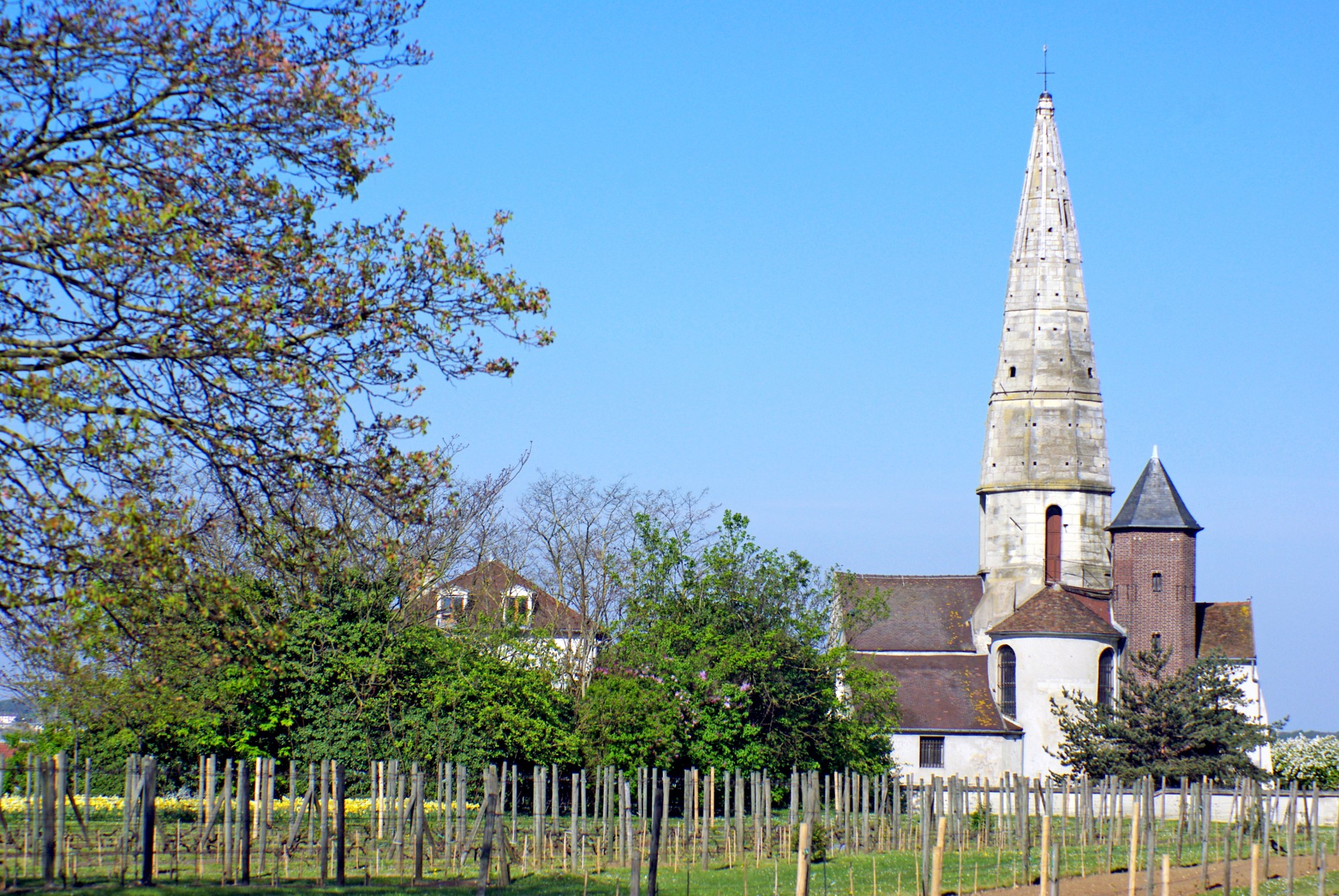 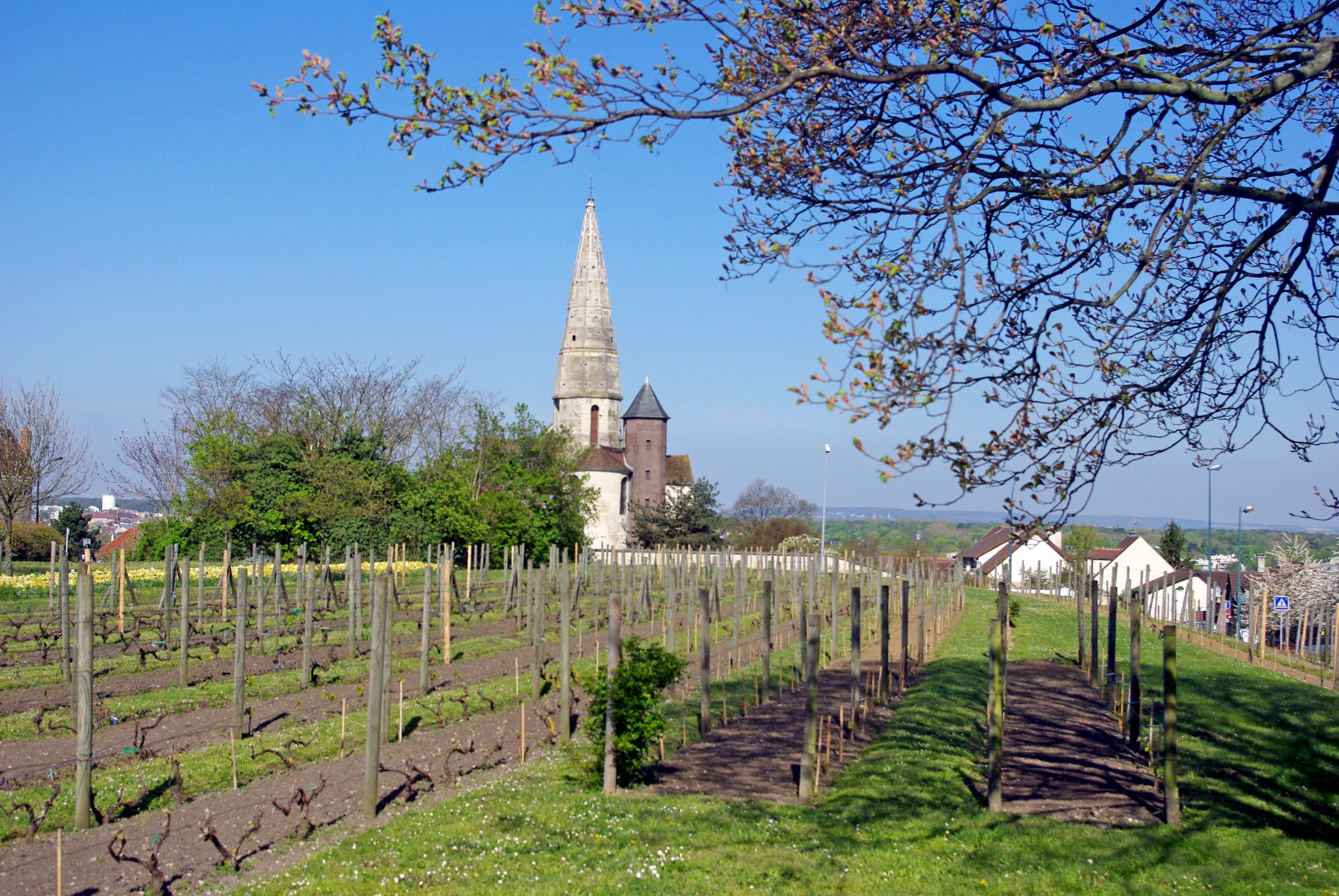 Compared to prestigious places in the Yvelines such as Versailles and Saint-Germain-en-Laye, there is no much to see in Sartrouville. However there is one exception to this: the (very) old St. Martin church which celebrated its 1000th anniversary in 2009. Built under the reign of Robert II the Pious it features a stone spire similar but smaller to Chartres Cathedral and Vendôme Abbey. 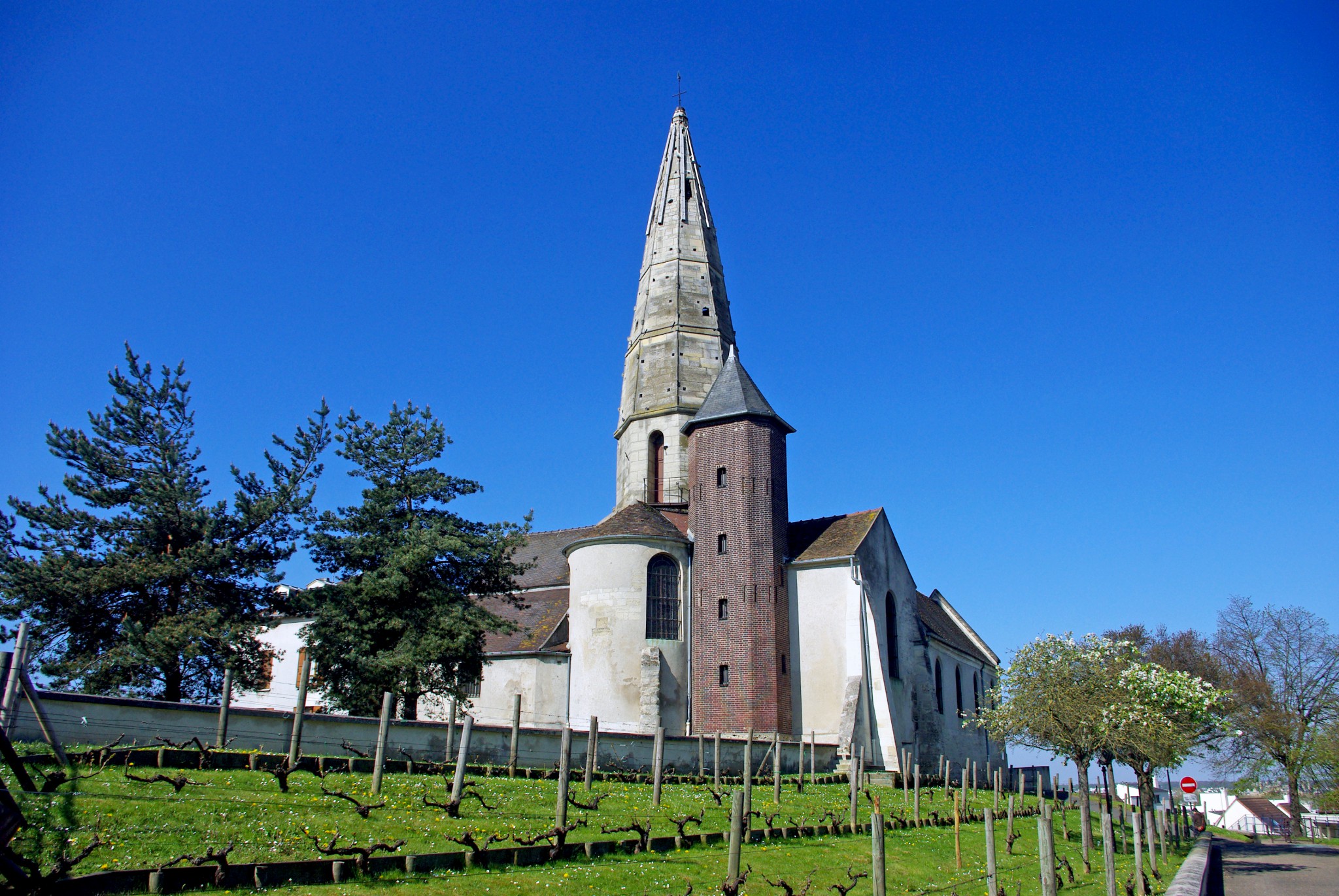 There are a couple of blooming apple trees next to the church which make great photos: 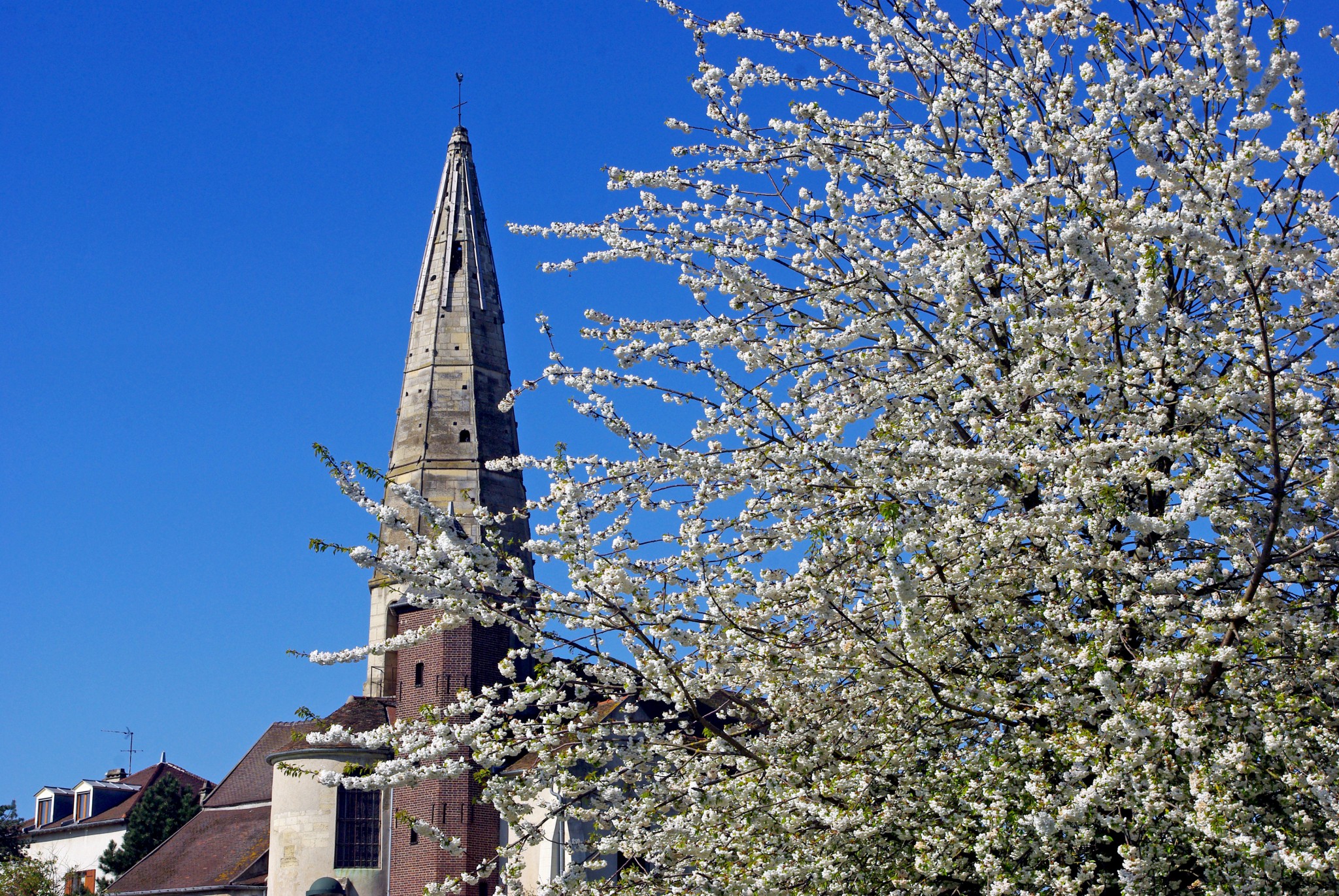 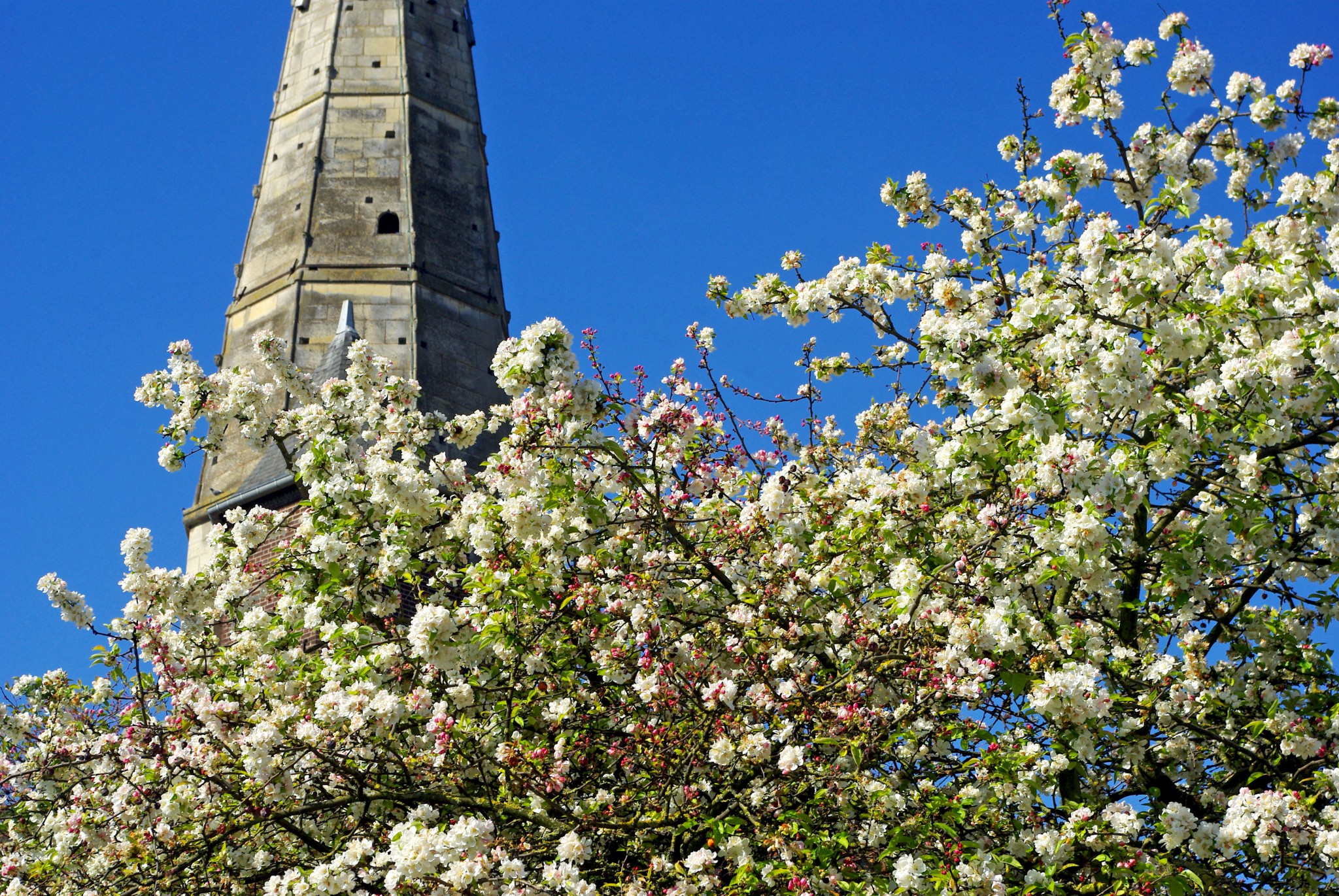 The portal of the church shows some interesting features of Romanesque style: 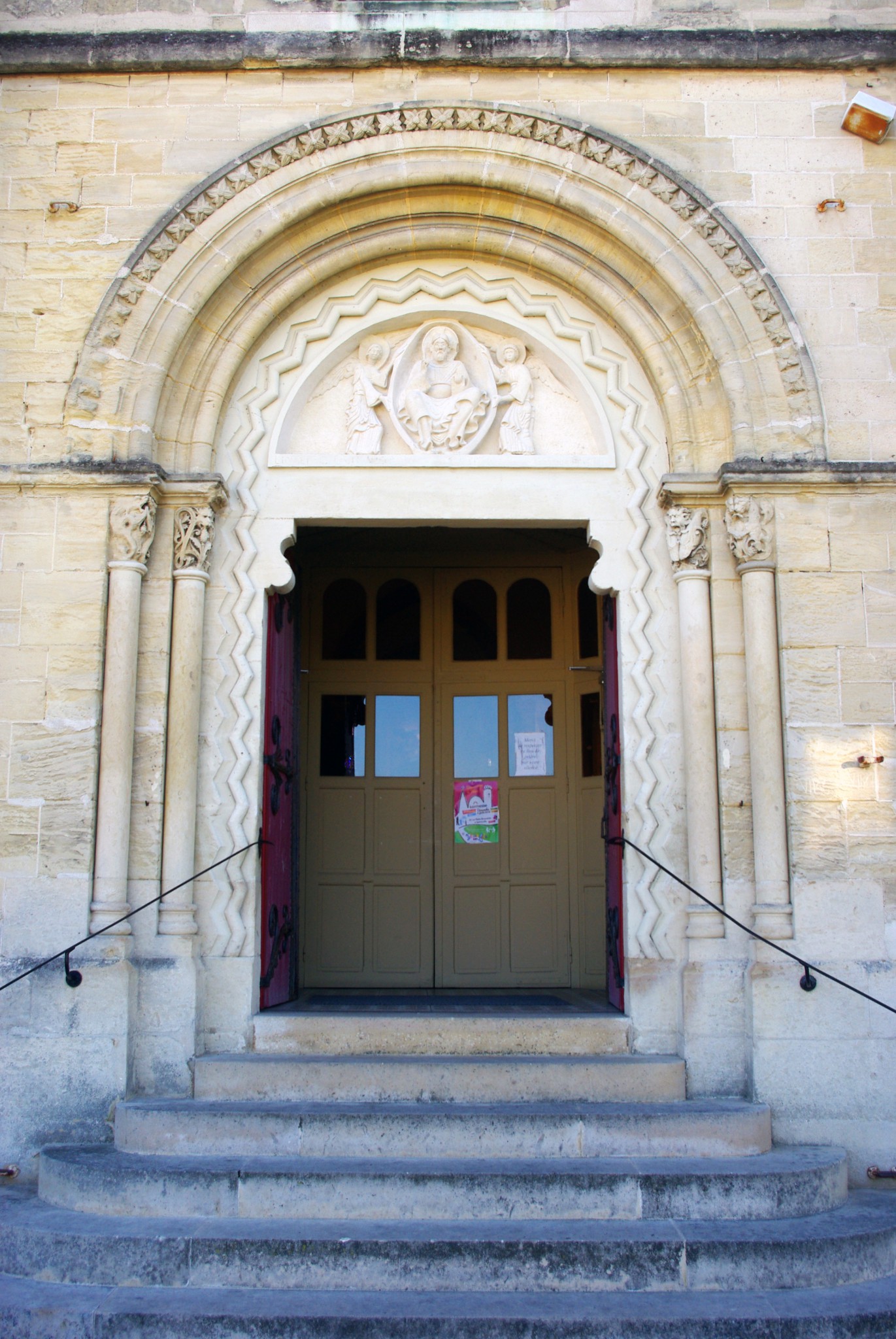 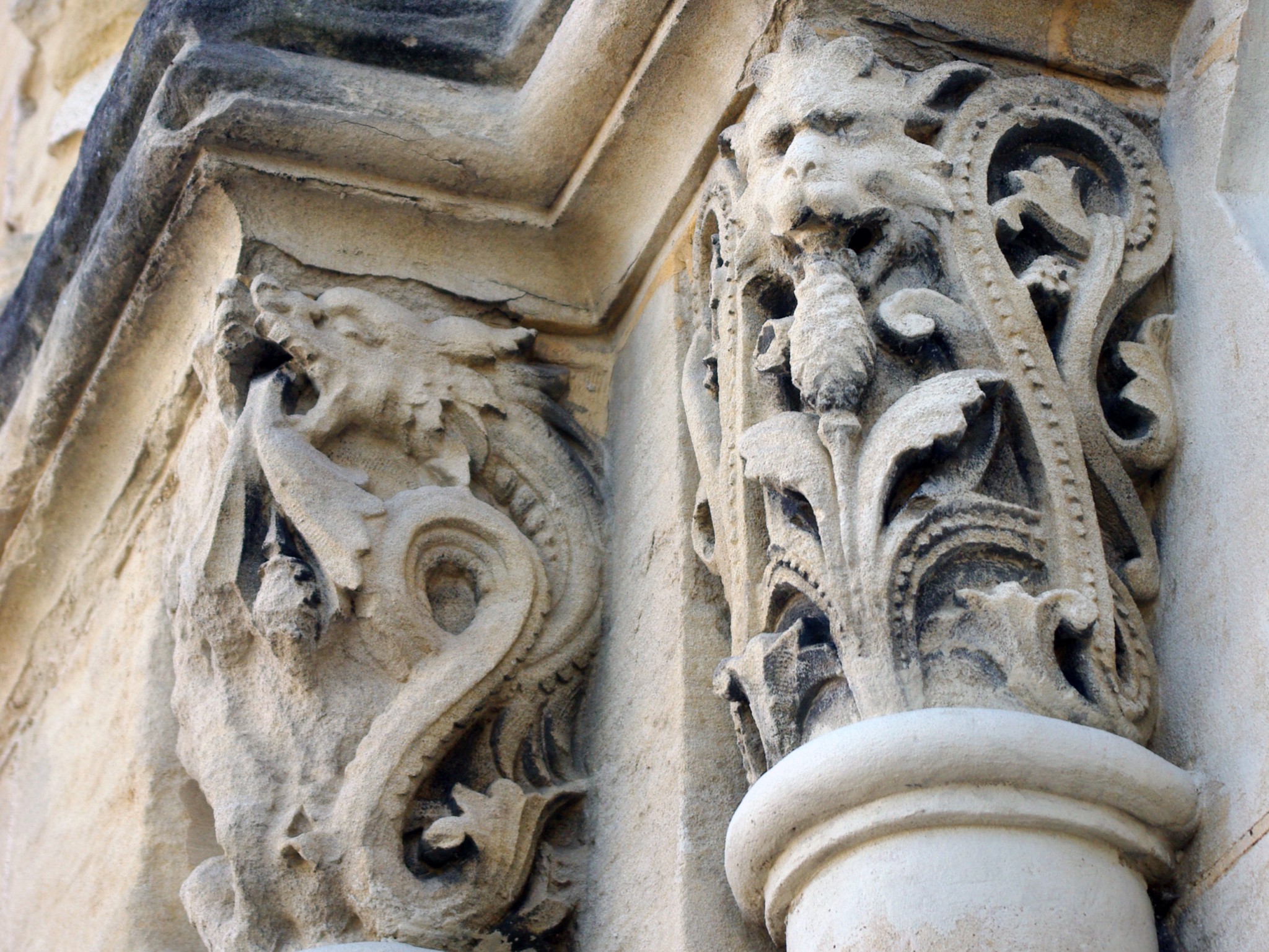 The church dominates the valley of the Seine and the view extends to the Park of Maisons-Laffitte on the other shore of the river. From the portal you can see as far as Cergy and the Le Nôtre terrace. 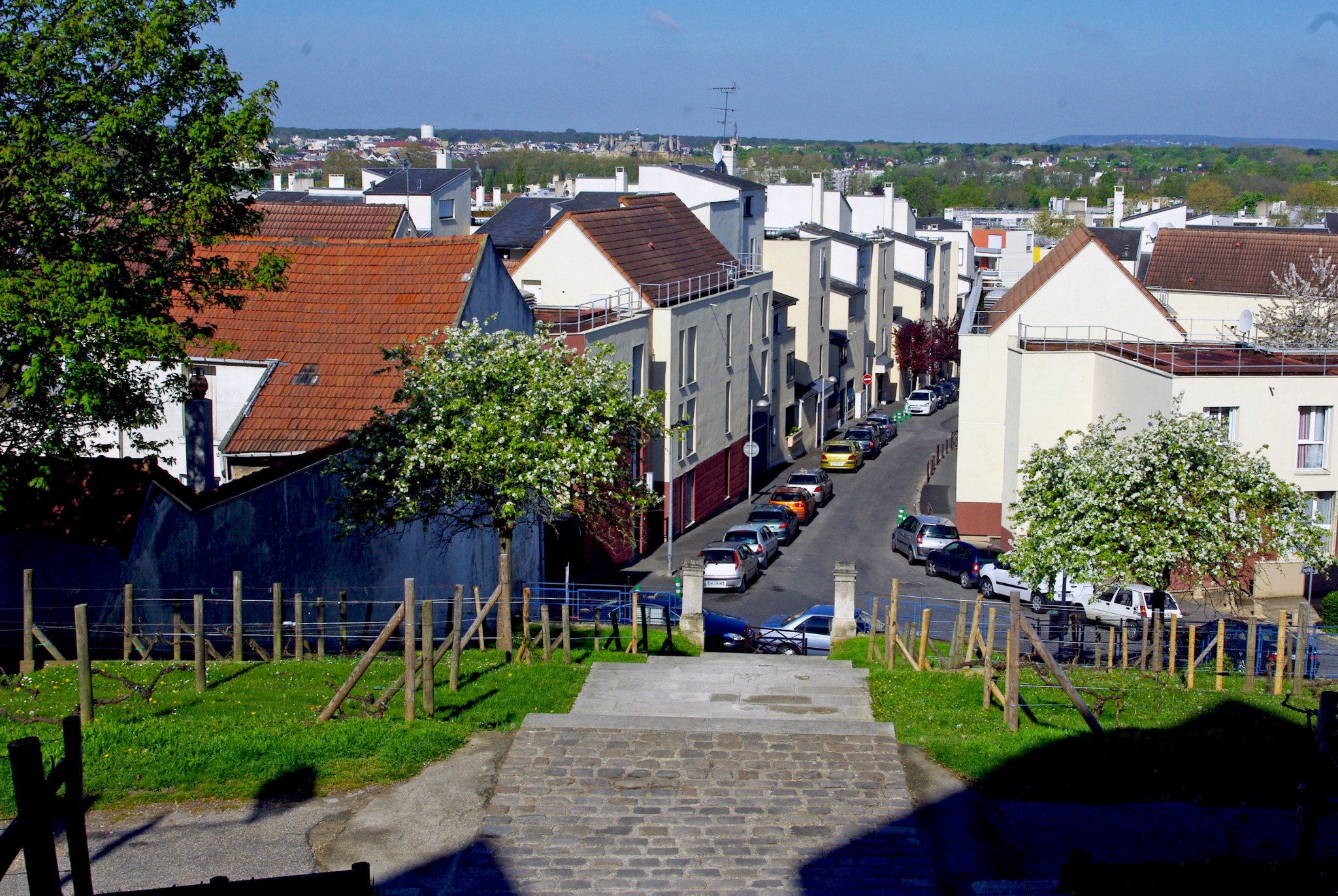 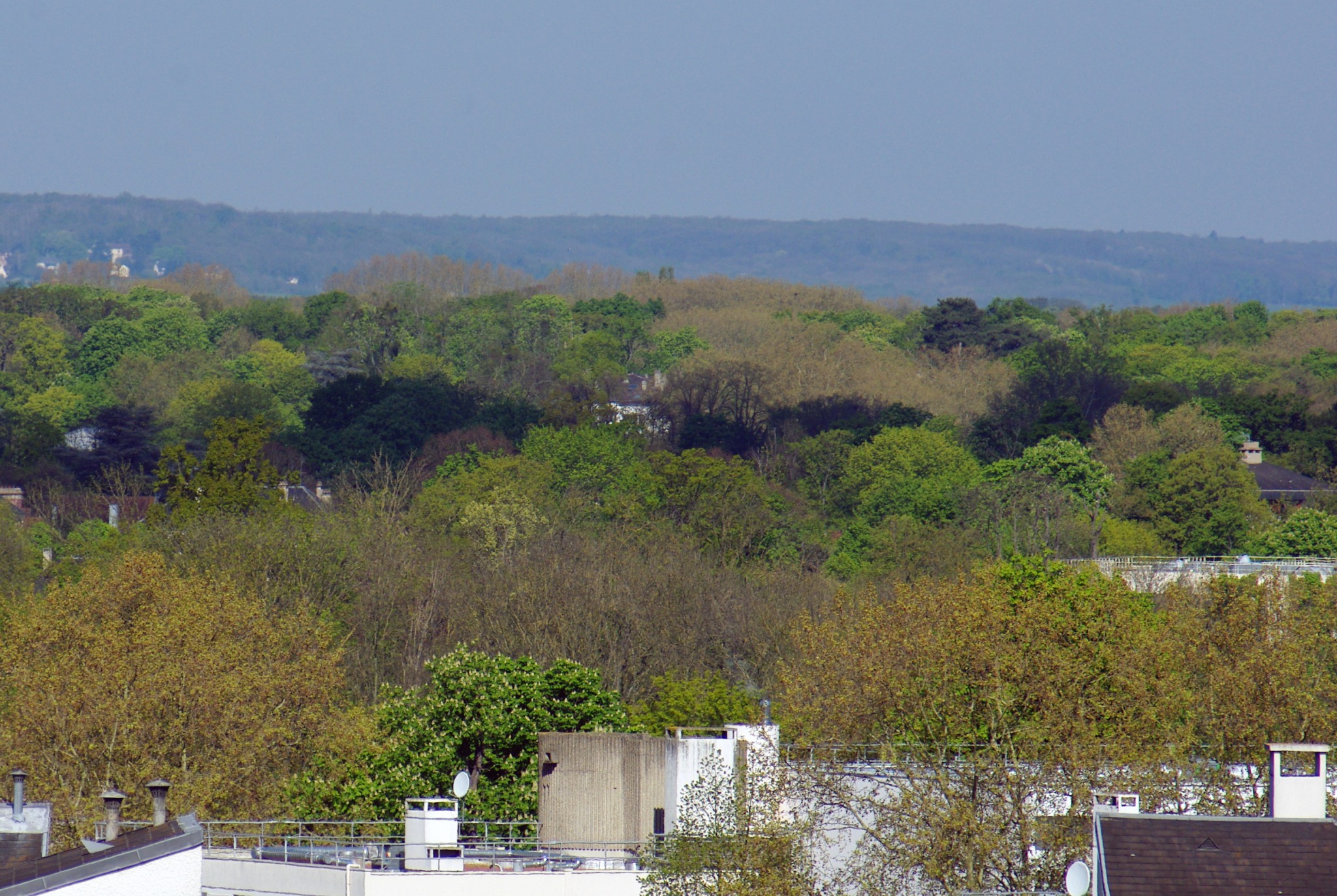 There are a few little corners reminiscent of the rural past of Sartrouville: 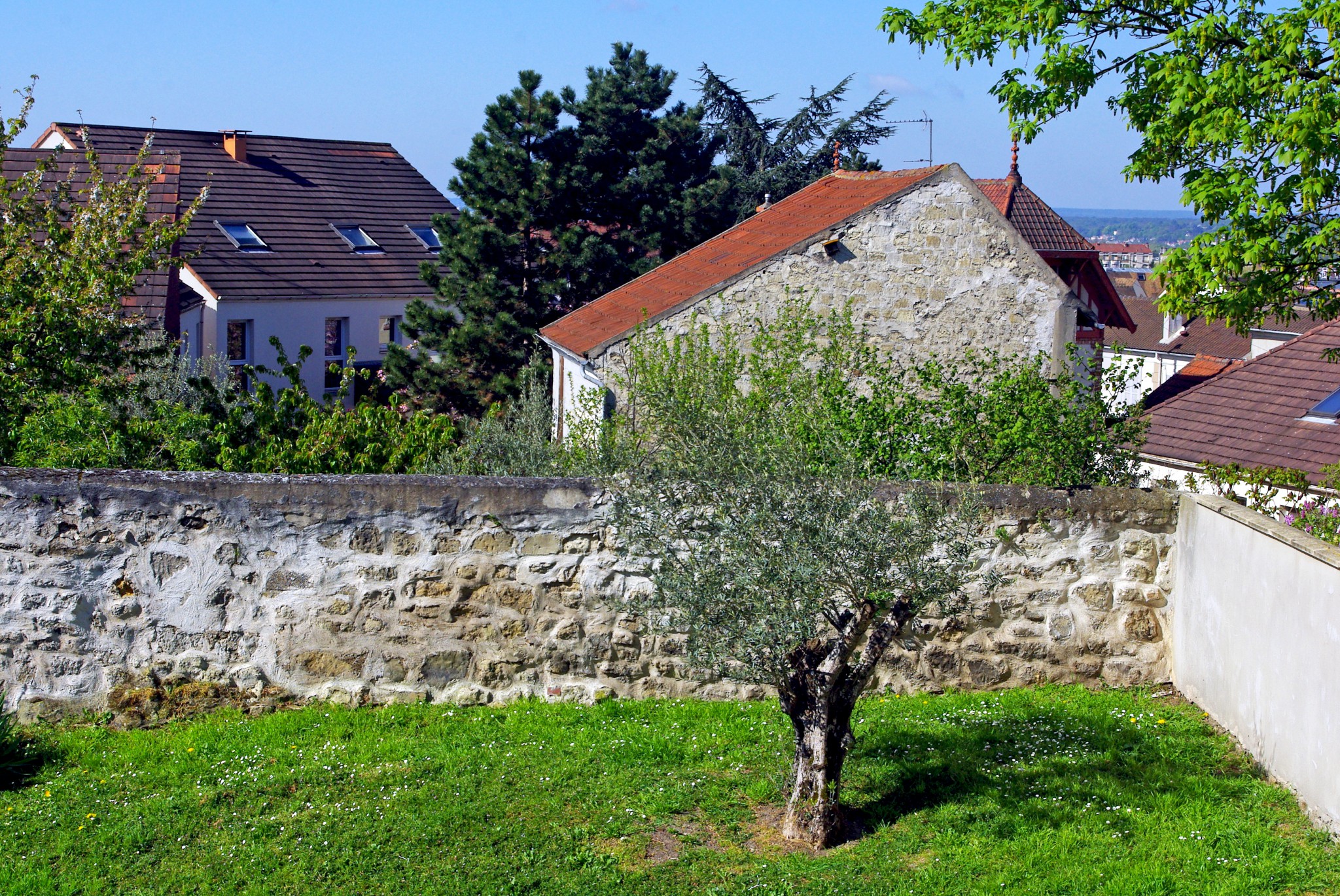 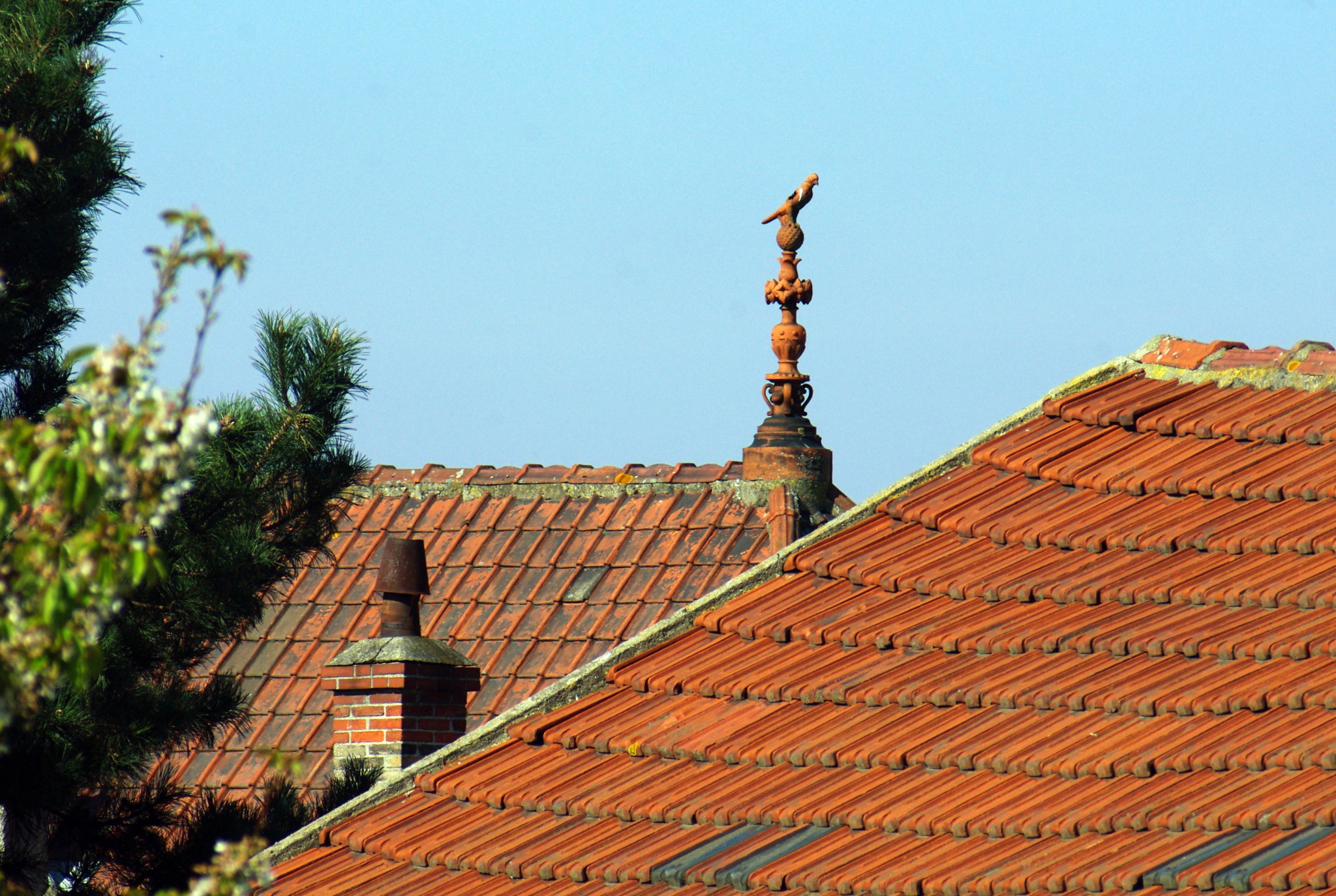 Our next stage was to reach the River Seine via the rue de l’église. Behind us the façade of the church appeared in backlight: 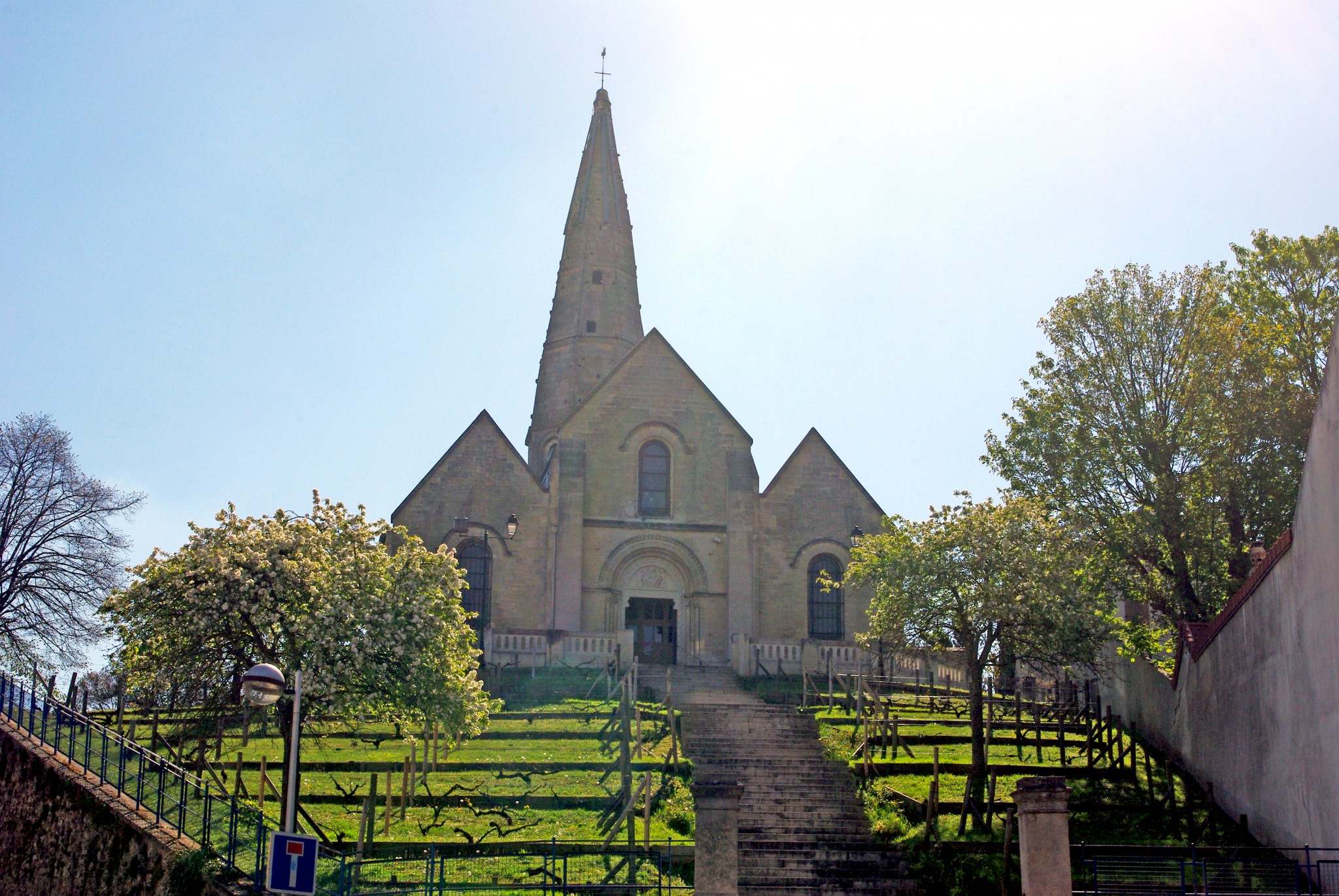 The residential rue de Seine is an car-free street bordered by blocks. Sartrouville is the second largest commune of the Yvelines département after Versailles with a population of 52,000. In 1946 there were only 17,500 Sartrouvillois and Sartrouvilloises. The city expanded considerably with the building of many blocks (HLM) in the Plateau district and has currently the largest low-density housing in all the Yvelines. 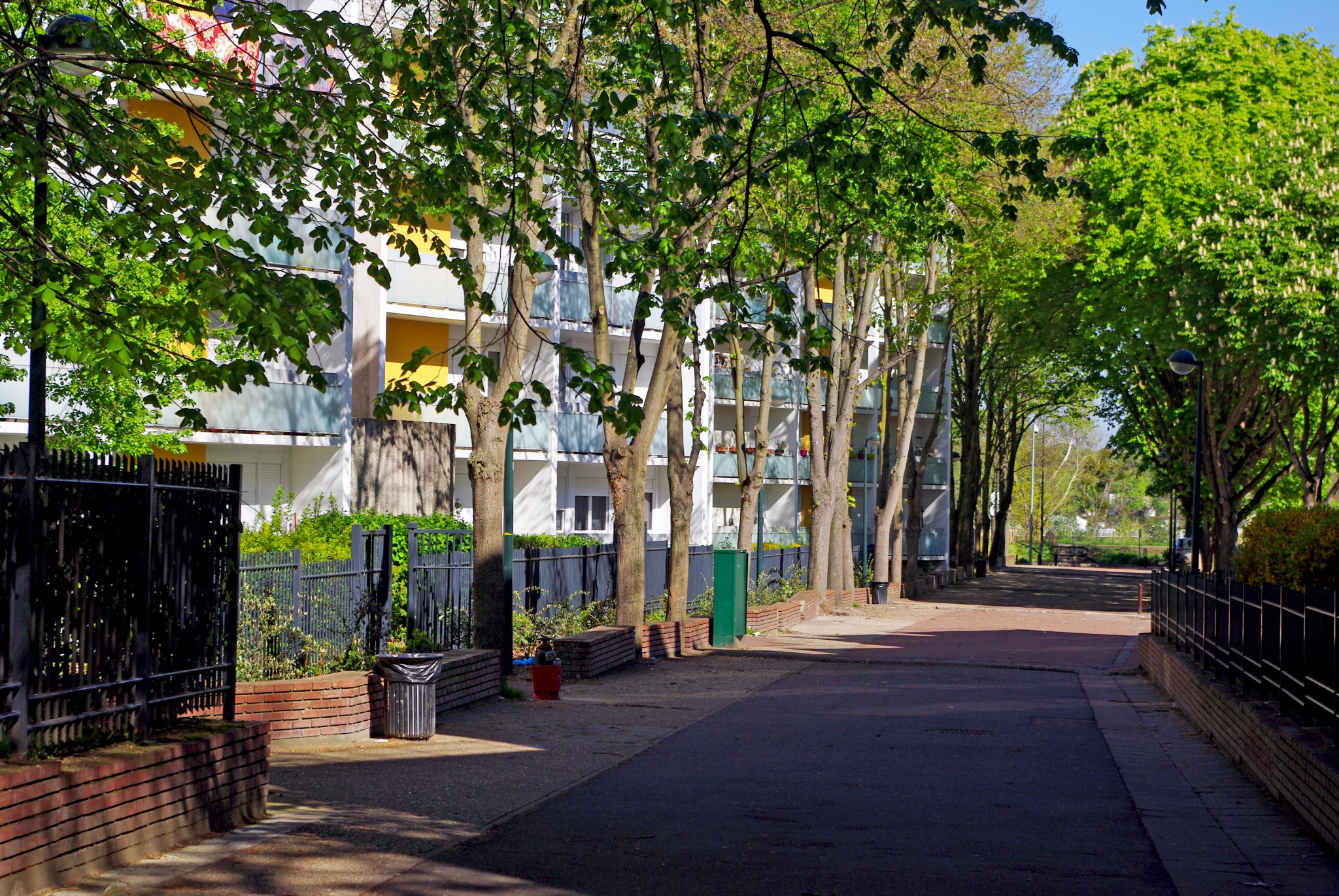 Once arrived on the Seine, we followed a pathway created along the river banks to the direction of the bridge linking to Maisons-Laffitte. I haven’t seen the Seine so blue for a long time. 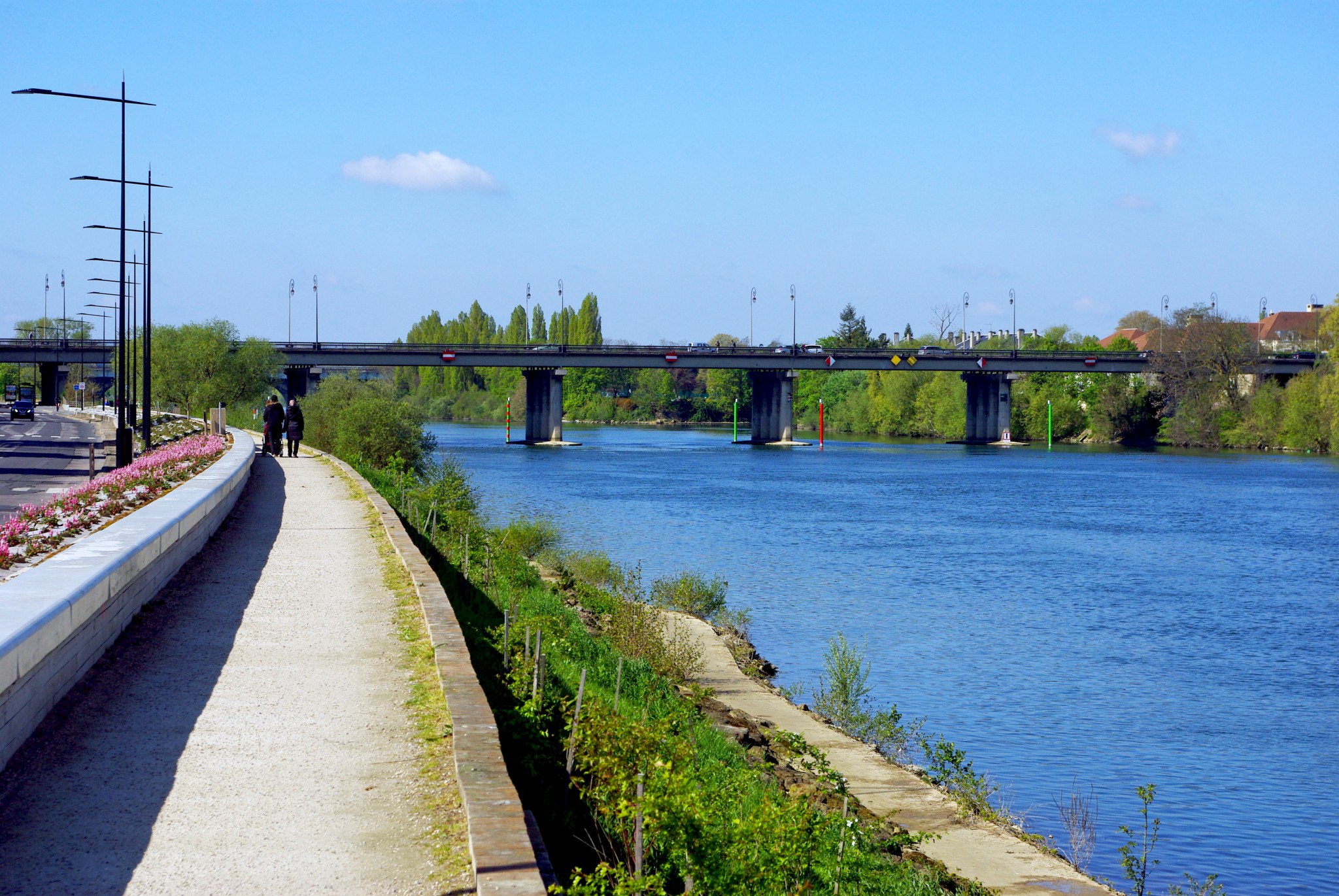 Facing the river and the racecourse of Maisons-Laffitte are some beautiful villas from the Belle Époque eras. 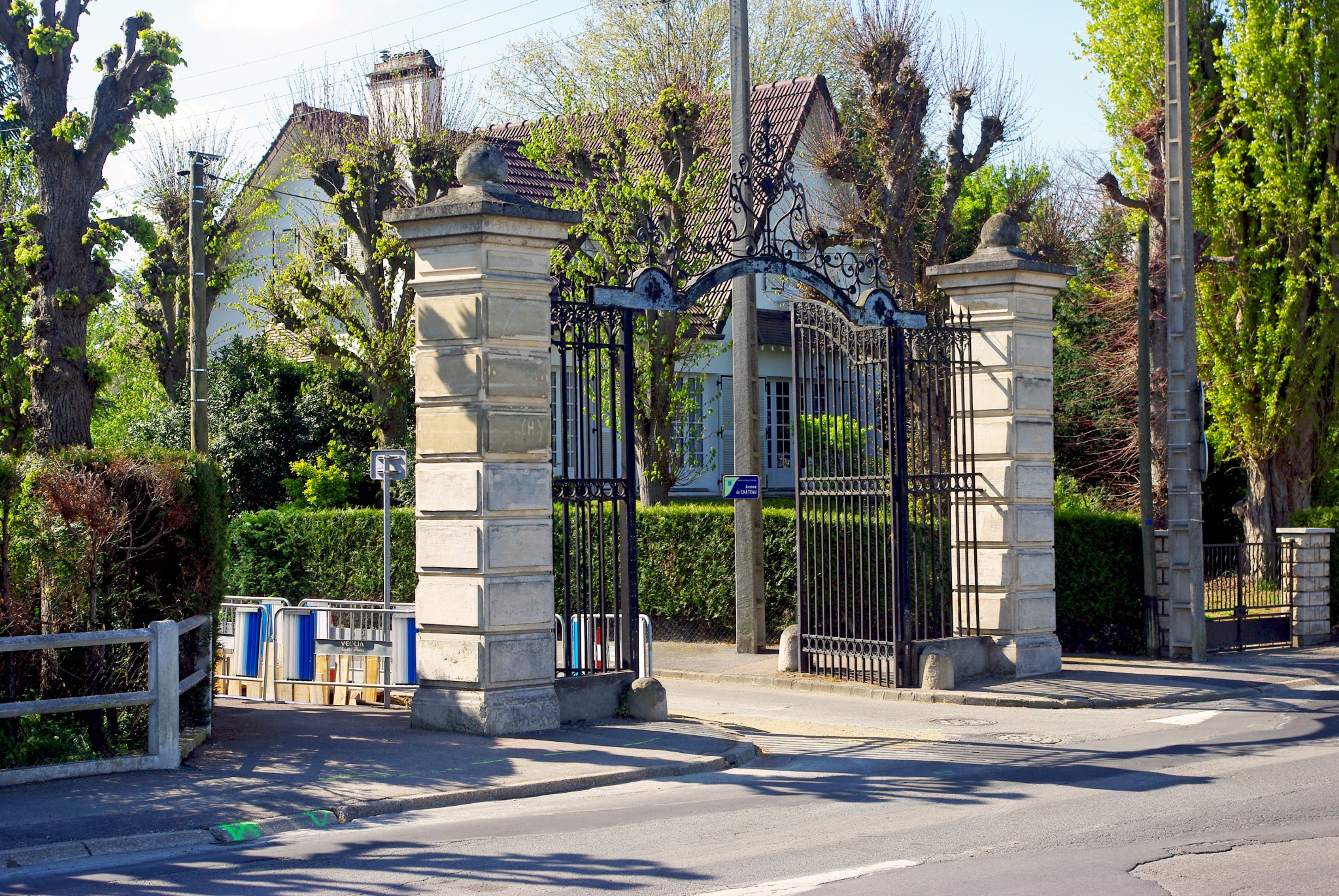 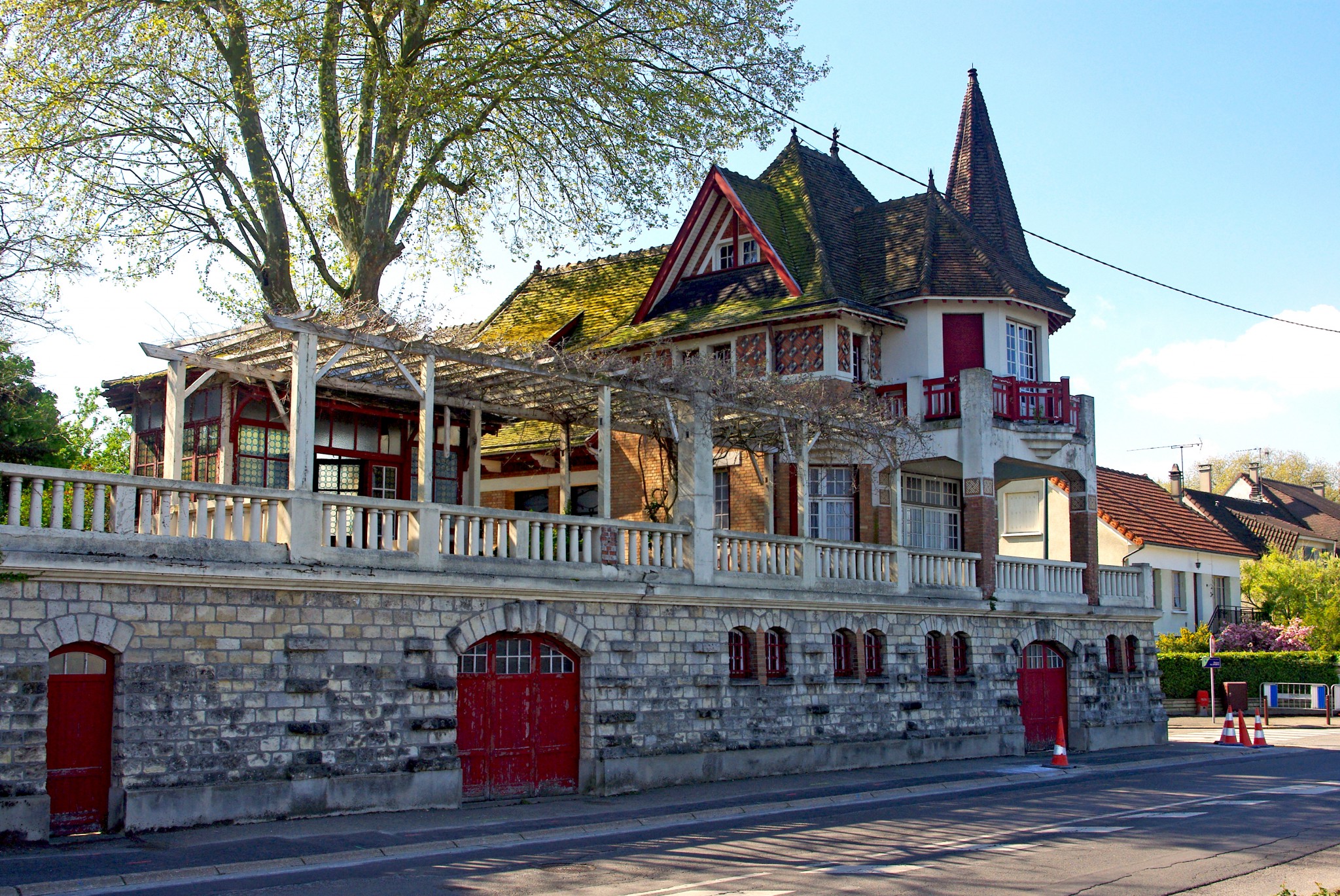 The SNCAN ( Société nationale de constructions aéronautiques du Nord) was a French manufacturer of flying boats which operated in Sartrouville in the 1920s and 1930s. 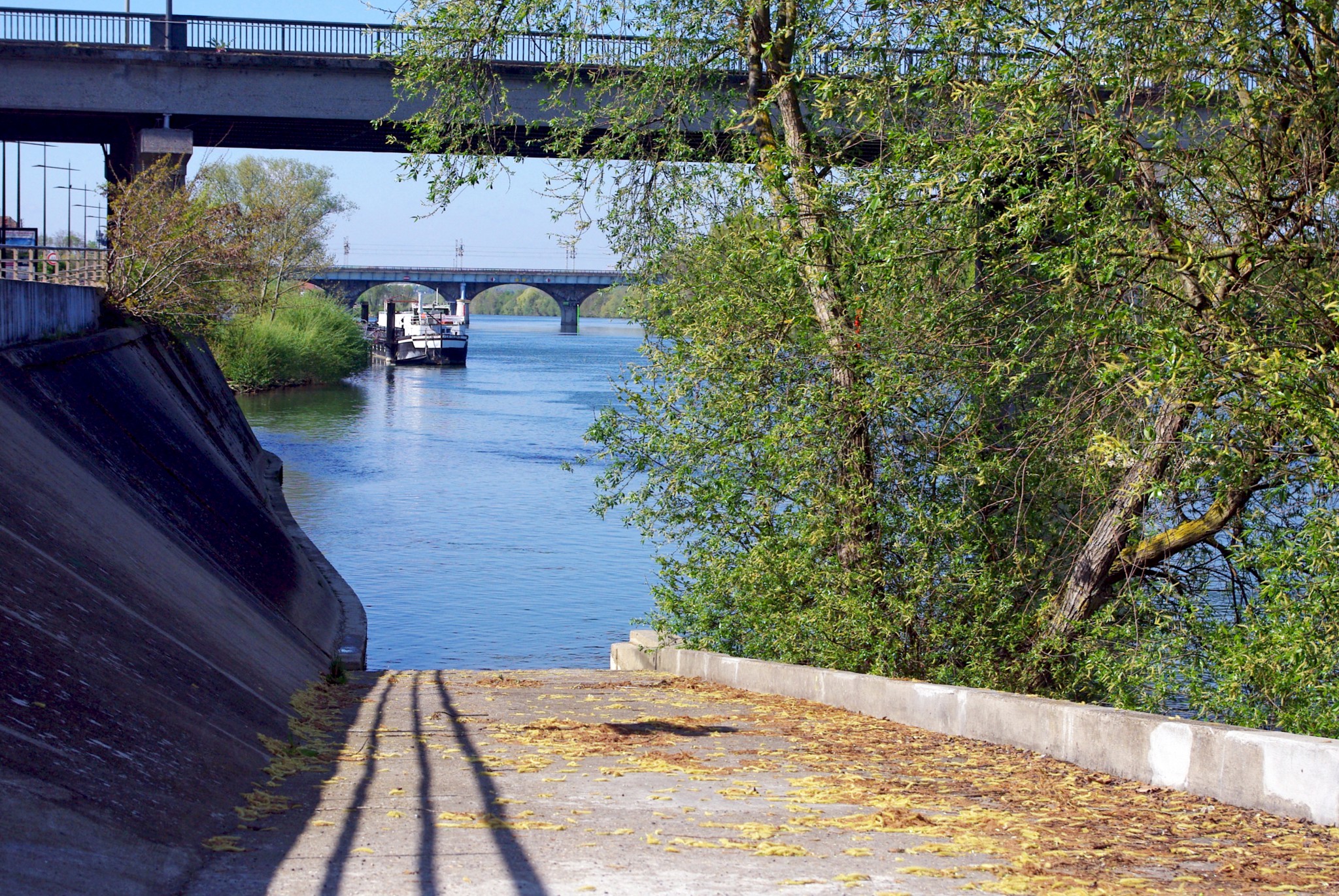 Here is the bridge we took from Maisons-Laffitte to Sartrouville at the beginning of our walk. Notice the  replacement bus connecting Sartrouville to Poissy and Cergy during the period of the RER A work closure. 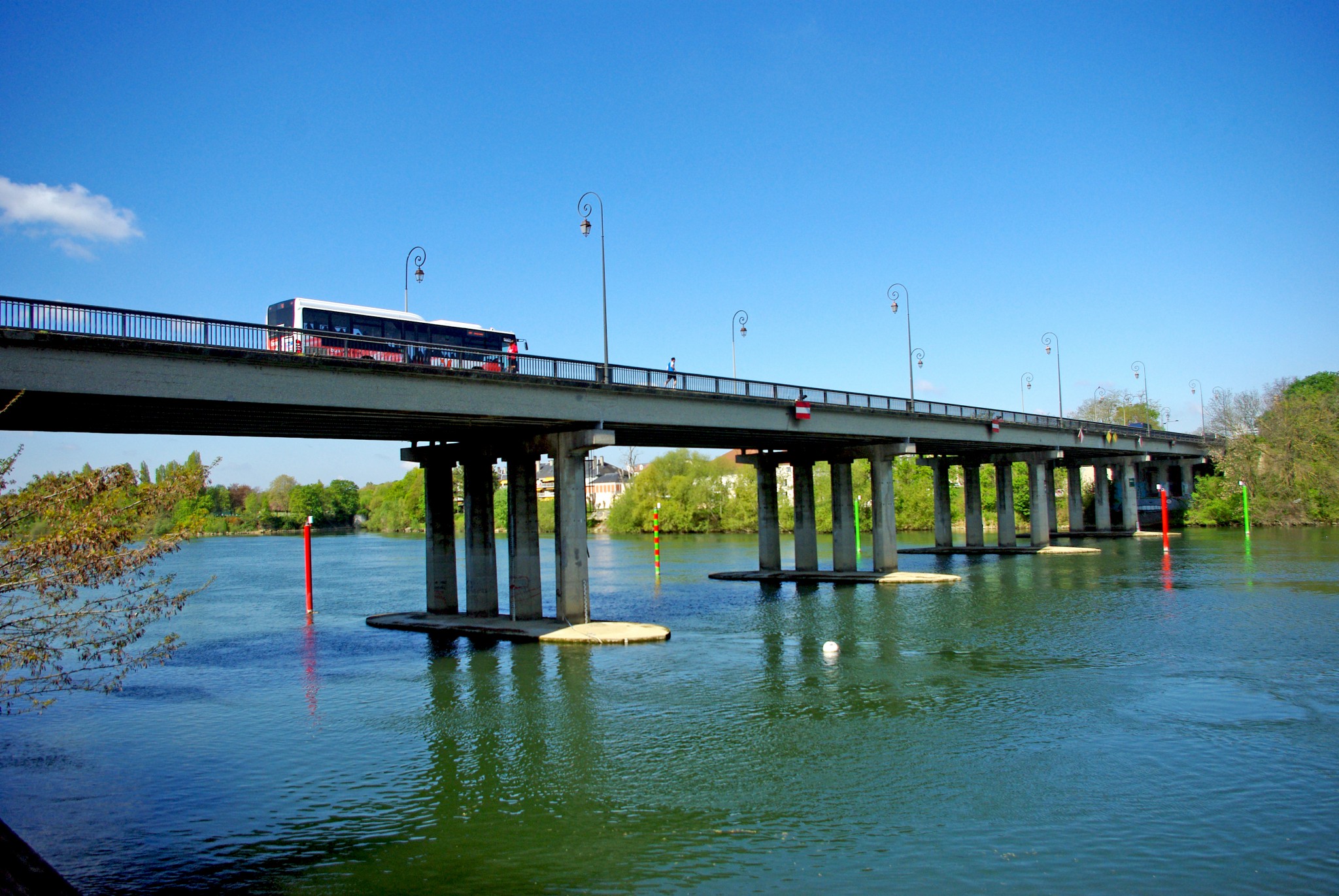 The last stage of our promenade took us to the peaceful Parc du Dispensaire. 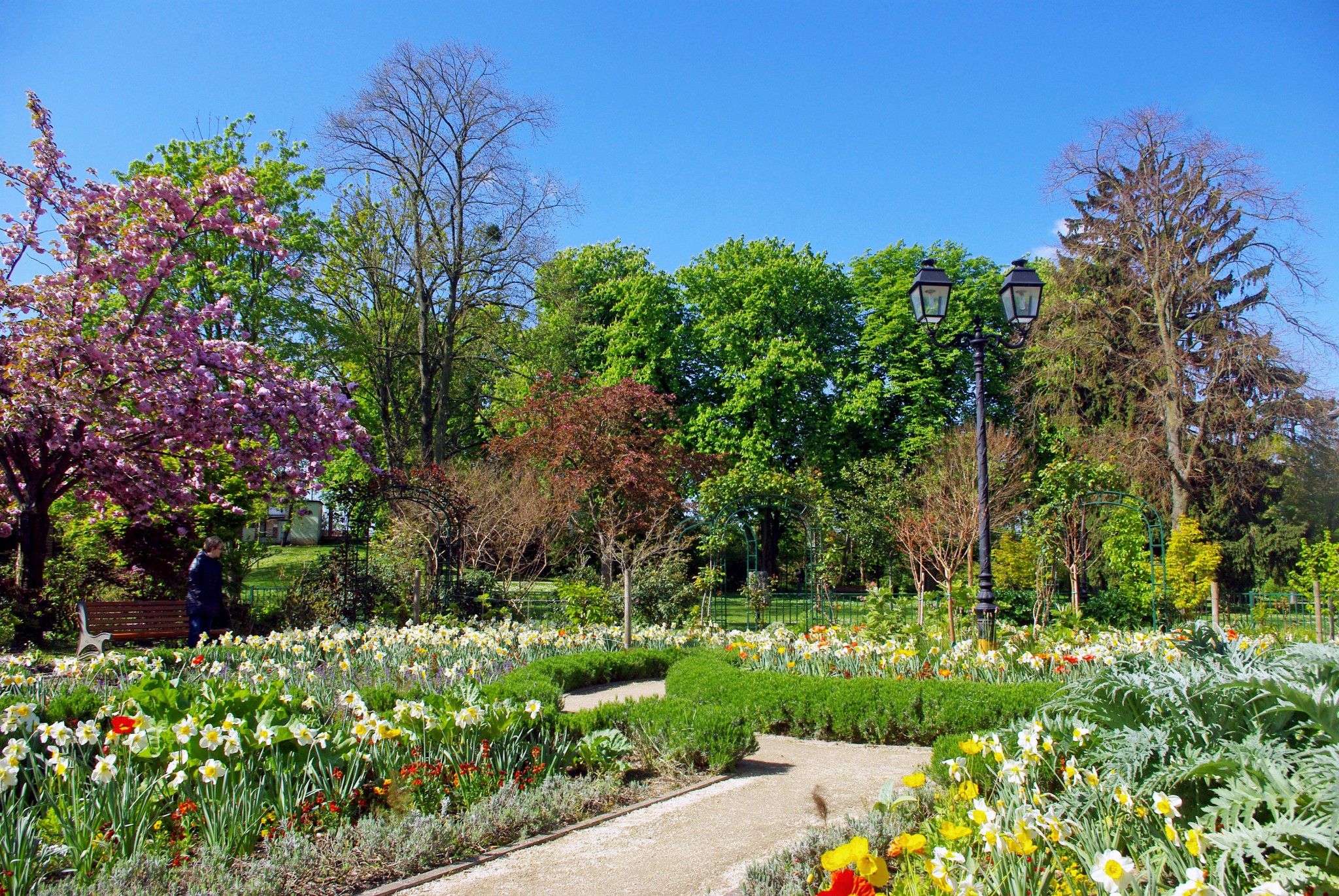 I will publish another blog article very soon with more photos taken at this beautiful park where hundreds of daffodils are in flower at the moment.

We came back to our beloved suburb of Maisons-Laffitte at approximately 11.30am through the bridge after a 7km walk. Just in time for lunch time!