Discover the Principality of Monaco

Discover the Principality of Monaco

Enjoying over 300 days of sunshine a year, the most glamorous destination on the Mediterranean looks like nowhere else on the French Riviera. The Principality of Monaco is a tiny state no bigger than New York’s Central Park. It is made up of a cluster of high-rise towers built on the side of the Maritime Alps. The celebrated micro-state evokes famous landmarks and personalities: the changing of the guard at the Prince’s Palace where resides the Grimaldi dynasty, a magnificent exotic garden, and the Casino of Monte-Carlo where you may catch sight of British spy James Bond.

Situation and description of Monaco

Monaco is a sovereign micro-state situated on the French Riviera between Nice and Menton. 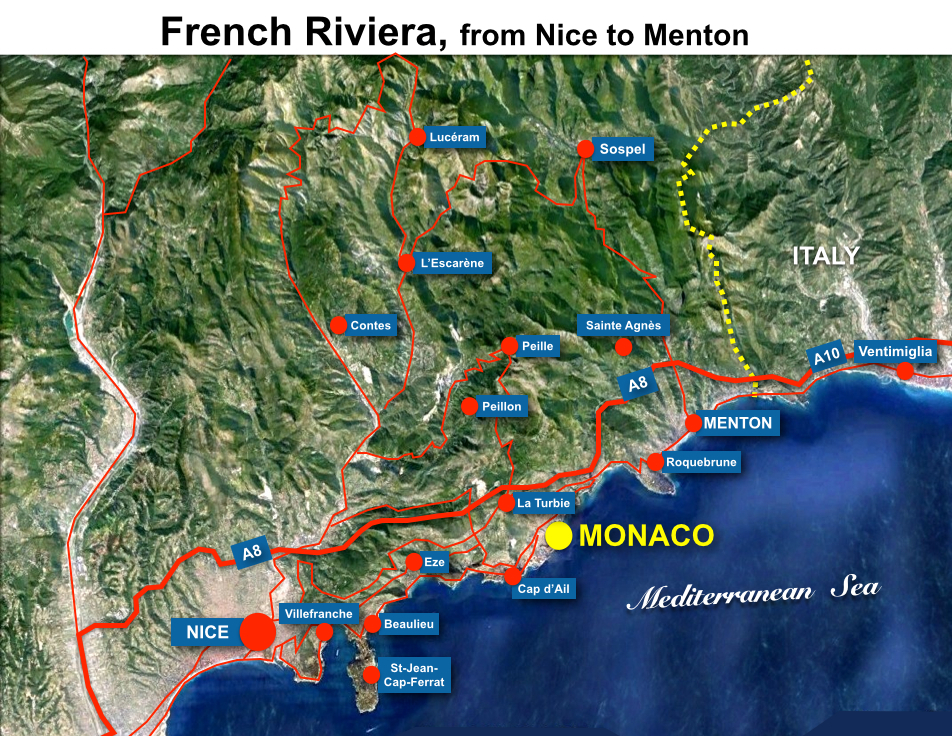 It shares a border with France of 4.4 km and its coastline is 4.1 km long.

This pocket-size Principality is the world’s second-smallest state after the Vatican with an area of 2.02 km2.

The process of creating new land from the sea has allowed the Principality to expand its surface by 20%.

The Principality is divided into five districts: 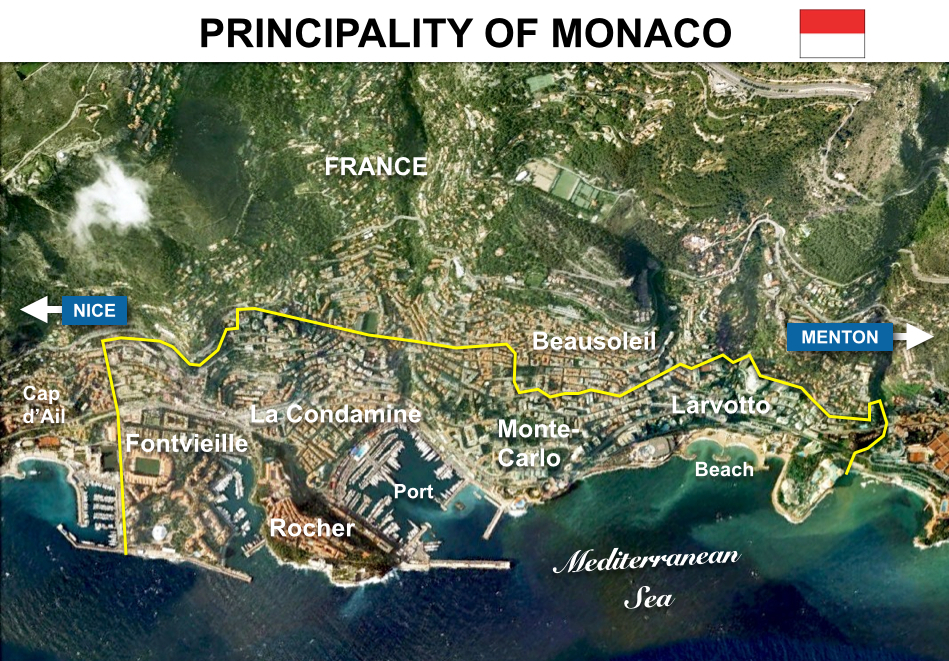 At the end of May, racing cars burn around the principality for the Formula 1 Monaco Grand Prix.

Monaco’s inhabitants are called “Monégasques“. More than 36,000 residents live in the Principality of which only 6,000 are citizens.

With its high-rise towers mostly built in the 1960s and 1970s, the microstate is the most densely populated country in the world.

The Principality is a constitutional monarchy that has been ruled by the Grimaldi dynasty since the 13th century. Prince Albert II (born 1958) is the current head of state.

The official language is French. Although not a member of the European Union, the Principality of Monaco uses the euro as currency.

As you can guess, staying in Monaco will certainly lighten your wallet! But it is still possible to plan to visit Monaco on a budget… and enjoy discovering the Principality.

The Rock of Monaco

The principality’s oldest part is Le Rocher. It consists of a rocky promontory between the port of Monaco and the Fontvieille district. The old town is the only part of the microstate to have been spared by developers.

Find out more about what to visit on the Rock of Monaco and the Prince’s Palace.

The district of La Condamine is situated between the rocky promontory of Monaco and the district of Monte-Carlo. The Principality’s second-oldest district is also a shopping area bordered by the Port of Monaco. This is where many expensive yachts – including the one belonging to the Prince of Monaco – are berthed.

La Condamine is where the Monaco Formula 1 Grand Prix starts and finishes.

Monte-Carlo (sometimes called Monte-Carle in French) is arguably the Principality’s most famous district. This is mostly due to the presence of the casino.

Find out more about the district of Monte-Carlo.

The Exotic Garden and the Observation Cave

The exotic garden is possibly the most beautiful botanical garden on the Riviera. It opened in 1933 in the district of Les Révoires.

The garden contains thousands of the rarest and most amazing succulent plants and cacti planted on rocky and steep craggy outcrops overlooking the Prince’s Palace, the old town and the Mediterranean Sea.

The plants come from various dry zones: the South-West of the United States, Mexico, Central and South America, South Africa, and the Arabian Peninsula.

On the same site, some 60 metres below ground, a prehistoric cave reveals its spectacular stalagmites and stalactites formed a thousand years ago.

Surroundings of the Principality of Monaco

Monaco is surrounded by beautiful sites situated on the French Riviera within a radius of 10 kms:

The Principality of Monaco in movies

Monaco has been the stage for several American and French blockbuster movies:

How to get to the Principality of Monaco

Monaco is accessible from Nice via the scenic coastal Corniche roads:

The Principality is bordered by the French A8 motorway linking Provence to Italy.

Monaco is situated 20 km from Nice Côte d’Azur International Airport which connects the Principality to more than 86 worldwide destinations.

The airport is 7 km away by helicopter to the Monaco heliport situated in the Fontvieille district.

The SNCF train station of Monaco is situated on the Nice-Menton TER line. The TGV to and from Paris-Gare de Lyon takes 5.5 hours. Other trains connect the Principality to destinations such as Strasbourg, Toulouse, Milan, and Rome.

Eastbourne: A Guide to the British Seaside Resort