The Librarians Portal (Portail des Libraires) is situated in the North end of the transept of Rouen Cathedral. Once the private access for the canon priests to the cathedral, the portal is a beautiful example of Gothic architecture in Normandy. 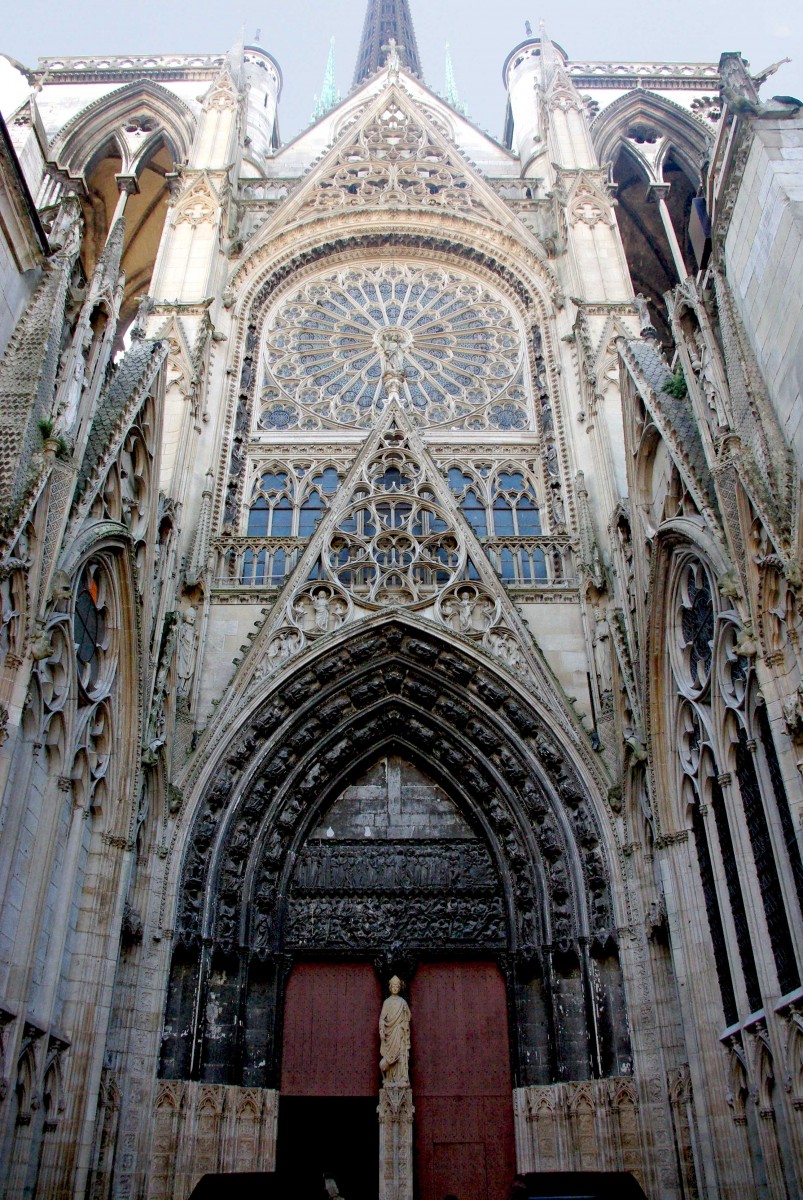 The North end of the transept bears a near resemblance to the Calende Portal (South Transept).

Its name refers to the transcribers and calligraphists whose shops once occupied the courtyard.

This was the private access for the canon priests who had to cross the courtyard to reach the rue Saint-Romain through a fortified gate. The gateway consists of two lofty pointed arches of equal height, crowned by a row of smaller arcades. 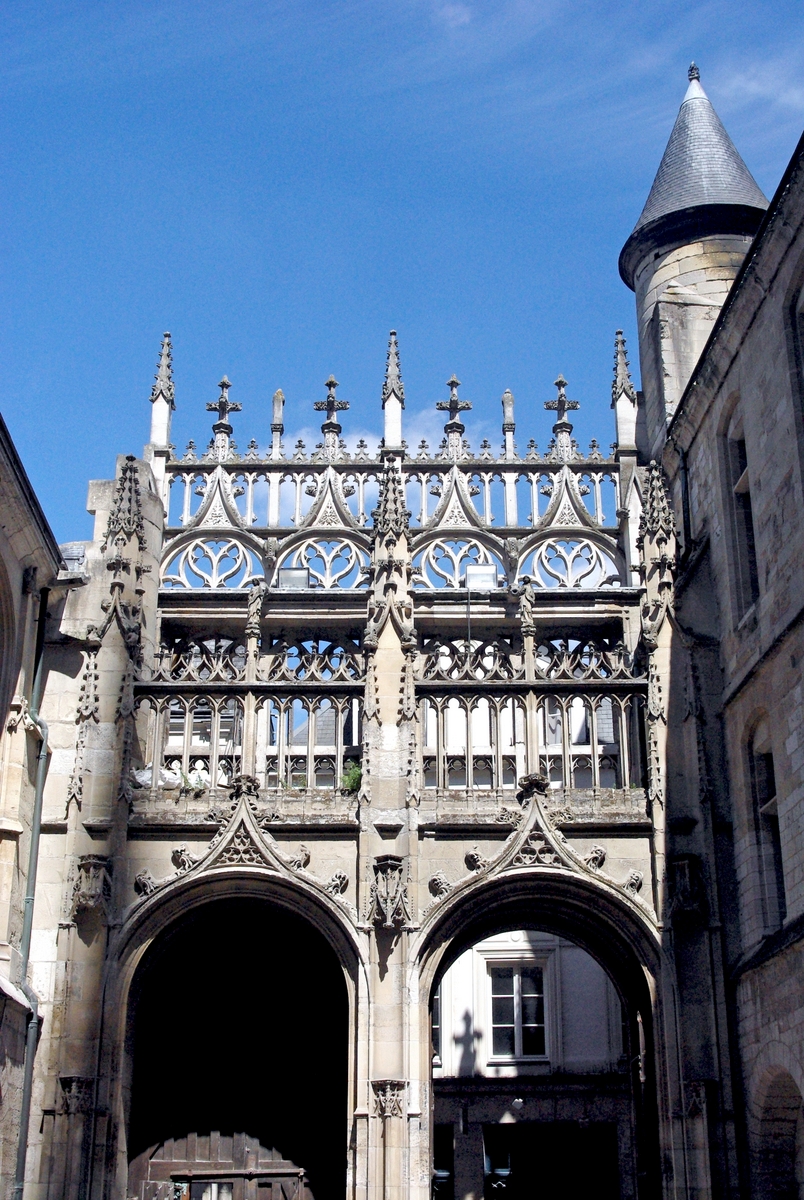 Construction of the Librarians Portal (Portail des Libraires) started in 1278.

On both sides of the portal are quatrefoils comprising of 200 medallions in well preserved featuring an endless variety of grotesques, fanciful monsters, animals, mermaids, tritons, harpies, woodmen, satyrs… 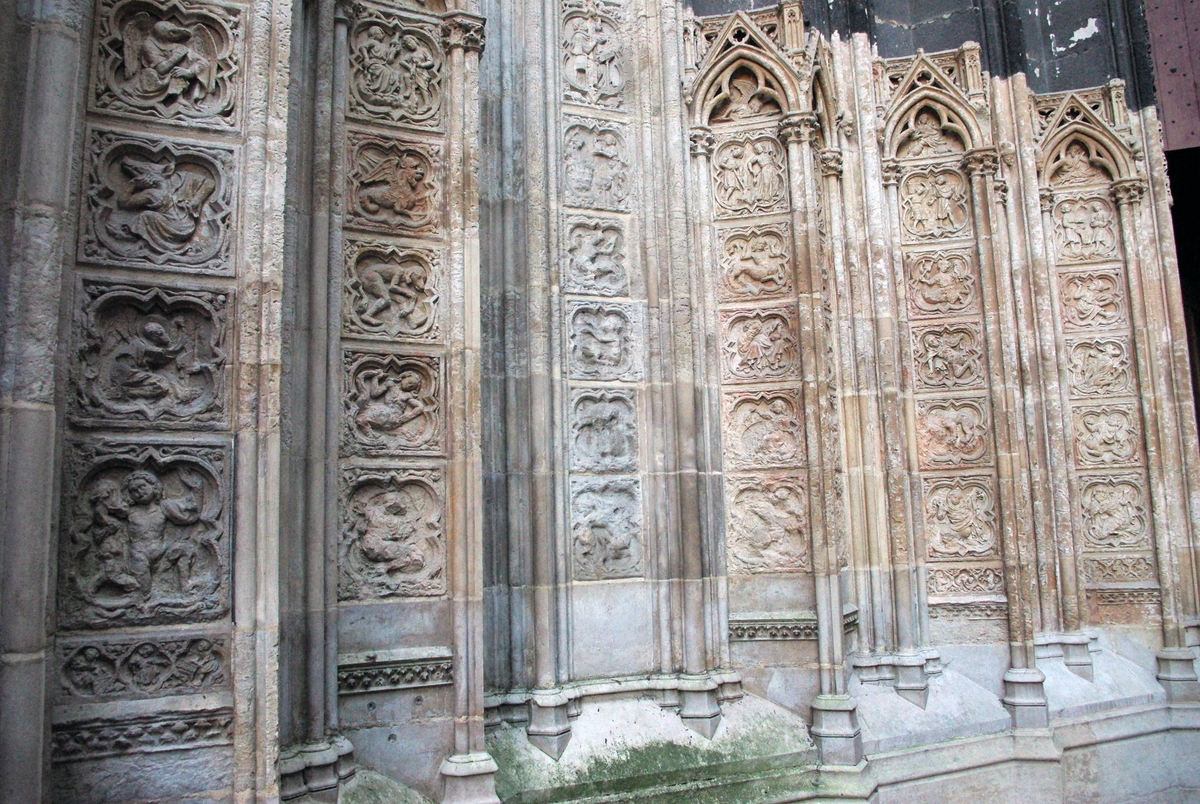 The statues which stood on each side of the portals have been destroyed and only their pedestals remain.

The tympanum reveals the Last Judgement on the two first register. The third register was supposed to receive a Christ in glory but was unfortunately never built. 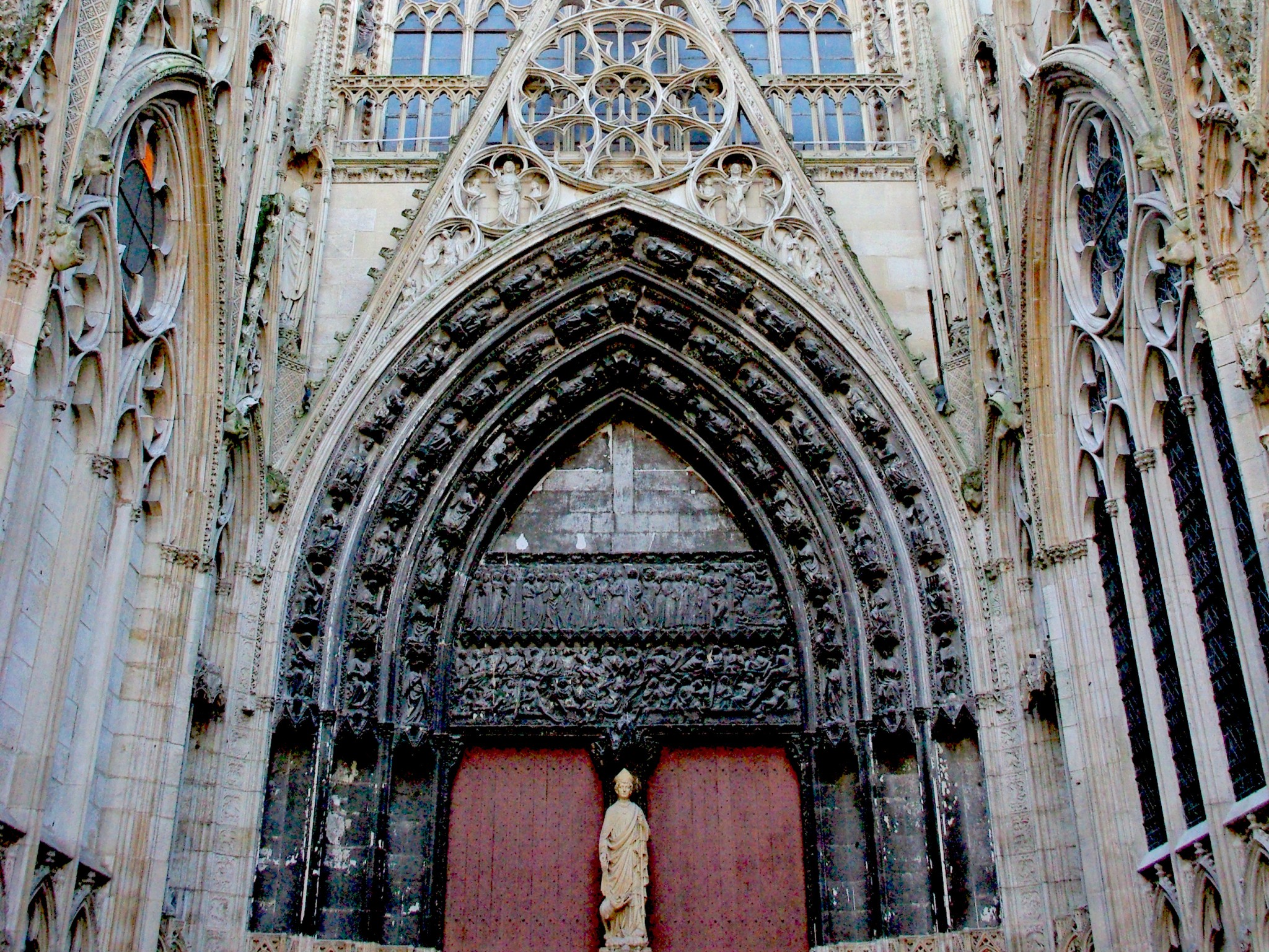 The trumeau holds a statue of Saint-Romain knocking down the infamous dragon of Rouen (la Gargouille). 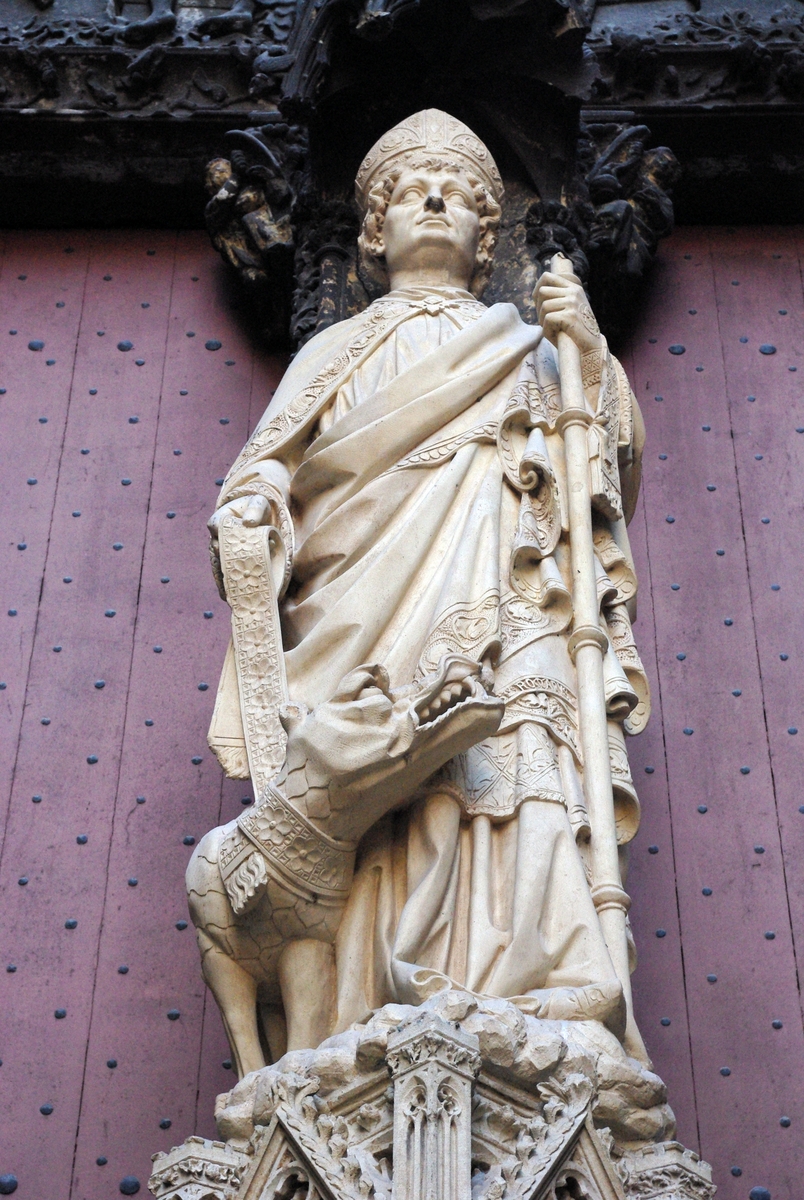 The pediment above the portal is crocketed and filled with tracery

Above the portal is a magnificent rose window. 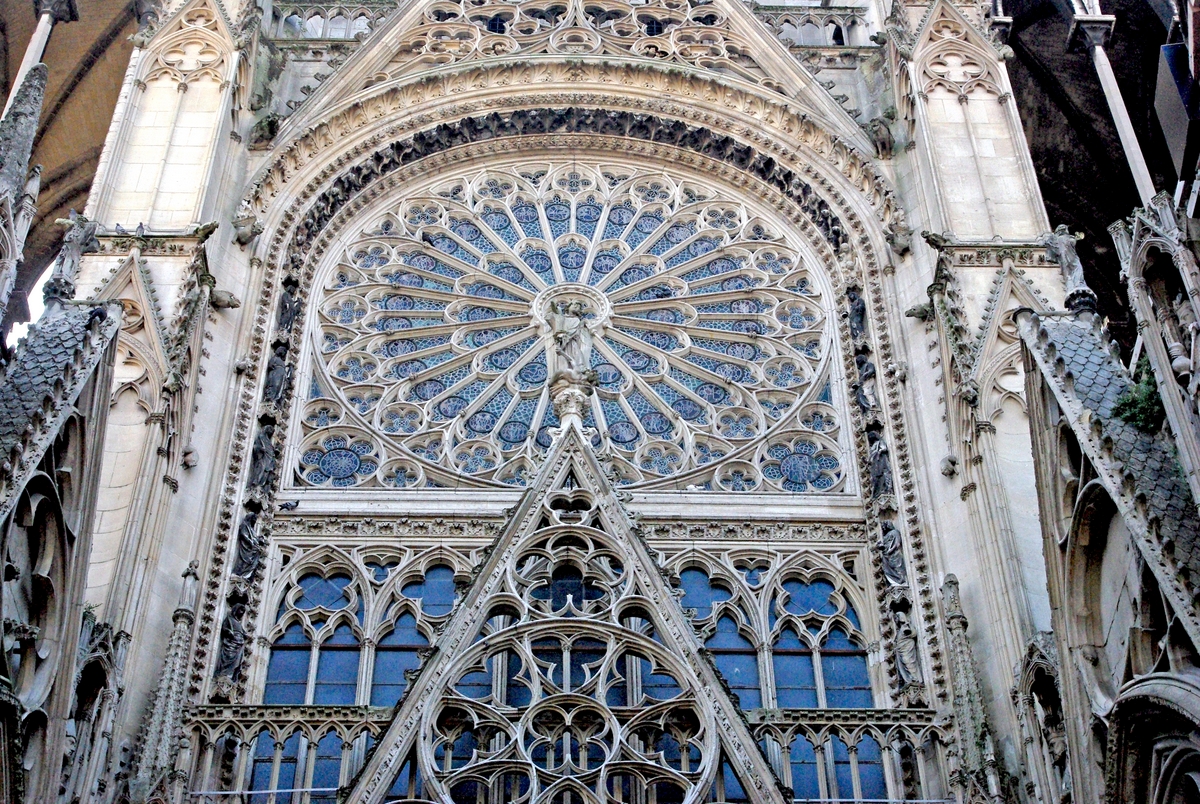 The gable of the transept is crocketed and holds a finial.

The Librarians Portal is flanked by two square towers similar to those of the South Transept.

The two buttresses flanking the portal are richly ornamented and terminate in pinnacles.

Find out more about Rouen Cathedral.