Place du Châtelet is a public square that marks the border between the 1st and 4th arrondissements. Situated in the heart of Paris on the Right Bank, the busy square gives access to the Pont au Change, a bridge that links the Île de la Cité. It takes its name from a fortress which had retained a sinister reputation.

Description of the Place du Châtelet

The square is bordered by two theatres and lies between the Quai de la Mégisserie and Avenue Victoria. The ancient thoroughfare of rue Saint-Denis and the wide boulevard de Sébastopol end at the square. The current bridge ‘Pont au Change’ which dates from 1860 links the square to the Île de la Cité. 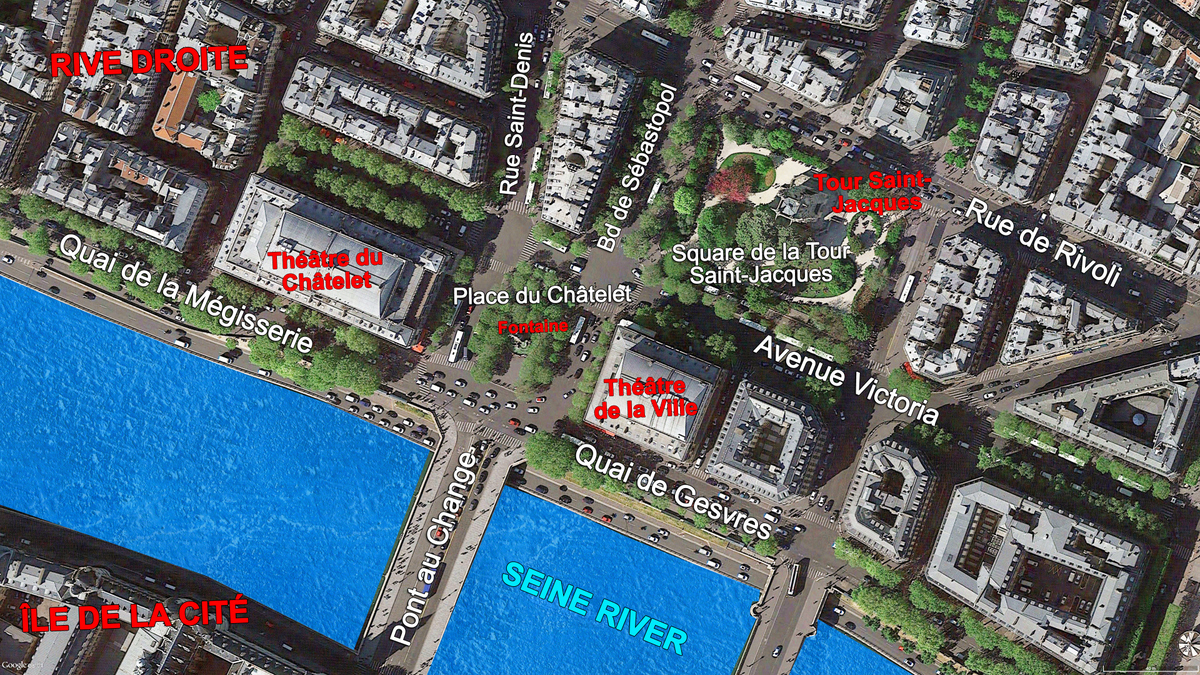 The Fortress of the Grand Châtelet

Today the square is an open area defined by trees and a monumental fountain. However, in the Middle-Ages the site had a complete different aspect. There stood an infamous fortress known as ‘le Châtelet’ or ‘le Grand Châtelet’. This stronghold situated at the entrance to the Pont au Change was the police headquarters and also housed a court and a number of prisons. It is believed that the first fortress was a wooden tower built by Charles the Bald in 870 to defend the bridge and the city from invaders. A barbican (châtelet in French – or small castle) was constructed in stone by king Louis VI to command the Pont au Change.

At the edification of Philip Augustus’ rampart, the Châtelet was then integrated into the defensive system of Paris and lost its defensive role. The fortress became the seat of the Paris prévôt, an official responsible for the protection of royal rights who oversaw the royal administration and executed royal justice. The fortified complex was rebuilt several times: by Charles V in the 15th century and by Louis XIV in 1684.

The role of prévôt of Paris was abolished in 1790 during the French Revolution and the fortress lost its function. Under the reign of Napoleon I, the whole area was refurbished and the Châtelet was dismantled between 1802 and 1810. The present-day square was consequently created at the north end of the Pont au Change.

In the middle of the square was placed a monumental fountain: the Fontaine du Palmier. The monument was designed in 1806 by architect and engineer François-Jean Bralle to immortalise the battles won by the French armies.

The base of the Fontaine du Palmier includes a circular basin with four sphinxes added in 1858 to commemorate Napoleon’s victory in Egypt.

The plinth of the fountain is topped by a 18 metre-tall column resembling a palm tree trunk. The base of the column is flanked by four allegorical figures sculpted by Boizot: Justice, Prudence, Strength and Temperance.

A gilded statue stands on top of the column and personifies the goddess Victory holding a laurel wreath in each upraised hand. The Theatres of Châtelet

At the request of Baron Haussmann who planned to reconfigure the area, architect Gabriel Davioud designed two identical theatres facing each other on each side of the square. Built between 1860 and 1862, the two theatres are still operating today: Théâtre du Châtelet and Théâtre de la Ville.

The Châtelet Theatre (Théâtre du Châtelet) also serves as an opera house. Formerly called ‘Théâtre Impérial du Châtelet’, it seats 2,500 people and is operated by the City of Paris.

The City Theatre (Théâtre de la Ville) used to be called ‘Théâtre Lyrique Impérial’ and ‘Théâtre Sarah-Bernhardt’ who produced there from 1899 for nearly two decades.