Place de l’Hôtel de Ville of Aix is arguably one of Provence’s most famous squares. It shows a great array of architectural styles, from the most simple to elaborate Baroque styles. Some interesting monuments border the square: the Town Hall, the Corn Exchange Hall and the Clock Tower. Follow the guide!

The Place de l’Hôtel de Ville of Aix is located in the city centre, in front of the town hall and at the foot of the clock tower, the city’s former belfry.

A flower market takes place in the square on Tuesday, Thursday and Saturday and an Old Book Fair on the first Sunday of the month. On the east side of the square, a line of residential houses put the finishing touches to the ensemble with colourful façades. 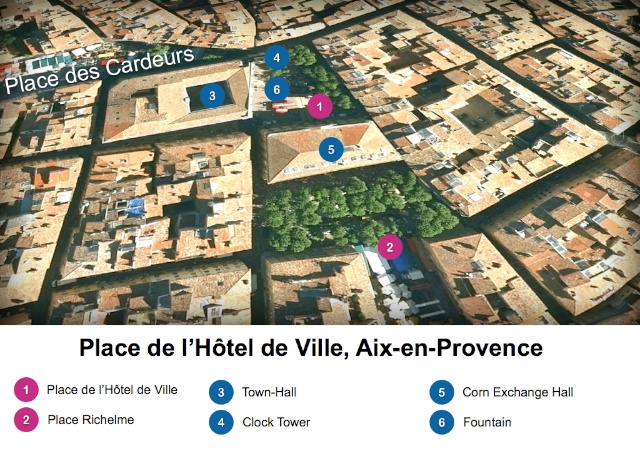 The town hall of Aix-en-Provence is one of the most interesting historic buildings in town with its Italianate facade, its carved wood front door and its inner courtyard.

Architect Pierre Pavillon built the mansion between 1655 and 1678 with the assistance of sculptors Rambot and Fossé.

The plan of the Town Hall is relatively complex. It comprises two parts:

The façade comprises two levels and a ground floor. It features Baroque elements with its decorum and theatrical setting.

Each floor is delimited by an entablature decorated with fruit garlands. A succession of cartouches topped the large windows. In addition, the whole structure is flanked by two large buttresses, making it much more monumental than the neighbouring Corn Exchange Hall.

The wrought-iron balcony and more details on the façade

The portal at the centre of the façade is framed by two coupled columns. Their aim is to draw one’s eyes upward to the iron-wrought balcony.

The balcony is framed by two pairs of pilasters which serve the same purpose.

Higher is the semi-circular tympanum decorated with a niche housing an allegoric bust of the Republic. To the top of the façade is a triangular pediment that completes the theatrical structure.

Eventually, the French Revolution and time stripped the façade of its rich decoration which once had statues of angels, the busts of the Counts of Provence and the King’s monograms.

The central portal of the façade, with the town’s coat of arms, leads to the inner courtyard through a magnificent railed entrance gate. Of a more severe appearance than the façade, the decor of the cobbled courtyard lightens from floor to floor.

The architect tried to control the space by building a sequence of areas slotted together from the courtyard to the staircase leading to the noble rooms of the town hall.

Above the entrance of the staircase is a mascaron depicting the face of an Indian sticking his tongue out insolently.

A balcony of honour hangs above the staircase entrance followed by a large niche. The latter once housed a statue of the Virgin.

From the entrance, the first flight of stairs leads to an intermediate landing. There is a very theatrical statue of Maréchal de Villars. The double-helix staircase, one of France’s oldest, leads to the upper level.

This neo-Classical building dates back to the 18th century. It illustrates the importance of the corn trade at the time.

An allegoric pediment from Chastel surmounts the northern façade (the one that opens onto Place de l’Hôtel de Ville of Aix). It depicts the two elements of agricultural prosperity in Provence: the Rhône and the Durance Rivers.

The Southern façade, which looks onto Place Richelme, shows motifs such as fruits, cereals and olives, evoking the function of the building.

Today, it houses the General Post Office of Aix-en-Provence.

The monument that gives the square its visual identity is the municipal clock tower to the right of the Town Hall.

The history of Aix’s belfry

The original site of the clock tower was the entrance to the military checkpoint of Sextius in the Roman era. It has kept its ancient foundation stones of white limestone in its base.

The tower dates back to 1510 and shows abundant decorative elements such as ogees, braces and Flamboyant pinnacles.

The clock tower became a symbol of municipal power and unity, similar to the Flemish belfries in the North of France.

Therefore, the most interesting side of the tower is the one facing the Place de l’Hôtel de Ville of Aix.

The lower part of the clock tower

The base of the tower reveals ancient blocks of white limestone. They probably originate from previous Roman construction.

On the ground floor of the tower is the pointed arched gate in Gothic architectural style.

There is a commemoration plaque mentioning the liberation of Aix in August 1944. Also, look for a funeral urn. It is dedicated to the manes (the spirits of the dead) of the Defenders of the Fatherland during the French Revolution. The urn took its place on the tower in 1801. It replaced a former bust statue of Louis XIII which commemorated the visit of the King to Aix in 1622.

Above it is the astronomical clock dating back to 1661. Under it are four 17th-century wooden statues rotating, representing the four seasons. A mechanism,  now gone, used to activate the rotation. Today this action is performed manually each season. The autumn statue also features a cherub with his eyes blindfolded as a reminder that love is blind.

The upper part of the clock tower

The astronomical clock is surmounted by a balcony which runs around the tower with a fine wrought-iron ramp.

Above it, two empty niches that once bore two statues flank another clock. The latter is activated by a modern mechanism.

On each side of the clock’s gables are two small round-shaped windows.

The crown of the edifice is the wrought iron terrace and its bell.

Finally, a 16th-century wrought-iron cage houses a bell. The Council used it as a tocsin for the defence of the town to a distance of one “lieue”, hence reaching the “banlieue” (ie. the suburb). Today, it still rings for the hours of the day.

At the centre of the square stands one of Aix’s most beautiful fountains. The pillar that decorates it is of Roman origins. The column was uncovered in the ruins of the Count’s Palace. At the top sits a globe surrounded by a golden laurel.

Then, in 1756 the fountain was decorated with mascarons of bearded men spitting water from the Pinchinats spring by Jean-Pancrace Chastel. Look for the four inscriptions at the bottom of the fountain:

Finally, the fountain of Place de l’Hôtel de Ville of Aix was the geographical centre of the city during the French Revolution, from where it was divided into districts.

Things to do in Aix-en-Provence

Looking for activities and things to do in Aix-en-Provence and its surroundings? Check out the offers from our partner Get Your Guide:

All our pages about Aix-en-Provence on the blog:

The best sites to see around Saint-Rémy-de-Provence