The imposing castle of Pierrefonds, located 80 km to the north-east of Paris, appears enchantingly around a bend in the road beside the Compiègne Forest. Built in the 12th century, the castle was destroyed in the 17th century then completely restored by the architect Viollet-le-Duc under the direction of Napoleon III.

This reconstruction, unusual but also often criticised, resulted in a grandiose architectural ensemble, making Pierrefonds a medieval as well as a modern 19th century castle. For this, Pierrefonds is known as “the romantic folly of the Emperor”. 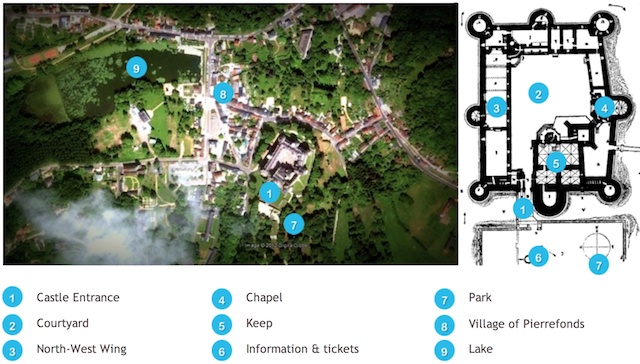 Pierrefonds in the Middle Ages

A solid castle, built by the descendents of Nivelon de Pierrefonds, was already standing on the site of Pierrefonds in the 12th century. The remains of this original building can be observed in the cellar of the existing castle. In 1393, Louis of Orleans, second son of the king of France, Charles V, inherited the county of Valois (including Pierrefonds) from his father and ordered the construction of a new fortress which people said was the most imposing and impregnable castle of its time.

During the Wars of Religion, the history of the castle was quite turbulent. In 1589, Pierrefonds Castle fell into the hands of Antoine de Saint-Chamand, captain of the League. He entrusted the castle to Captain Jean de Rieux who organised a mercenary army there which he sent out to pillage the neighbouring area. On three occasions he managed to resist the assaults of the King of France’s army. The son of a commoner, he gave himself a noble title by proclaiming himself Count of Pierrefonds. Captured while returning from Paris, he was tried and sentenced to death. He was hanged in Compiègne in 1594.

In 1617, the castle came into the possession of François-Annibal d’Estrées and was besieged and taken over by the troops of the Cardinal of Richelieu following a rebellion led by the Prince of Condé. Richelieu ordered the total dismantling of the castle but this was never carried out completely due to the magnitude of the task. For more than two centuries, the castle stayed in ruins.

The restoration of Viollet-le-Duc

In 1811, Napoleon I purchased the ruins of Pierrefonds for less than 3,000 francs. During the 19th century, a keen interest in medieval art developed. Several ruins, such as those of Pierrefonds, attracted artists (like Corot) and other celebrities who were in search of Romanticism. It was this attraction for medieval art that led to the restoration of several monuments in France: Notre-Dame de Paris, the abbey of Mont-Saint-Michel and also the Haut-Kœnigsbourg Castle in Alsace and the Cité de Carcassonne.

In 1848, the Pierrefonds was listed as a historic monument and in 1850, Napoleon III, then Prince-President, visited the ruins of the castle. In 1857, the Emperor commissioned the gifted architect Viollet-le-Duc to undertake the restoration of the castle in order to turn it into a prestigious residence. Initially, the restoration only involved the living spaces (the keep and two towers) and the rest of the castle was to have been left in “picturesque” ruins.

However, in 1862 the Emperor decided otherwise and commissioned the architect to carry out a restoration to match his ambitions: Pierrefonds should be fully reconstructed in order to become an imperial residence, a prestigious place where the Emperor’s visitors could admire his marvellous collection of weapons and armour. Viollet-le-Duc renovated the Godefroy Tower, the square tower of the keep, the three great rooms overlaid in the seigniorial logis as well as the great staircase.

For the architect, already passionate about the Pierrefonds project, the works allowed him to restore an example of French history and architecture from the beginning of the 15th century:

“The Emperor has acknowledged the importance of the ruins of Pierrefonds, historically and artistically. The keep and nearly all the exterior defence system are taking their original form. Thus Pierrefonds is one of the best examples of French feudal architecture from the 15th century and has been restored by the noble will of the sovereign. […] The castle of Pierrefonds, restored faithfully, will make the civil and military art of the period, superior to all that was done in Europe from Charles V to Louis IX. […], well known”.

The detractors of Viollet-le-Duc considered his restoration work egocentric and taking great liberty with the archaeological truth. For them, the interior decoration was more of a creative work. Indeed, the architect’s idea of what the castle should have looked like was not based strictly on the history of the structure. This is particularly obvious in the inside courtyard with its Renaissance galleries and the polychrome paintings of medieval inspiration. The architect boldly imagined sculptures, panelling, painted decors and furniture which seem to herald the Art Nouveau of the 1900s rather than the Middle Ages.

In the aftermath of the Franco-Prussian war, Napoleon III’s empire collapsed, leading the way for the 3rd Republic. The restoration of Pierrefonds continued despite of the new political regime. Viollet-le-Duc died in 1879 without seeing the fulfilment of his plans. The works were stopped in 1885 and the decoration of the rooms remained unfinished due to a lack of funds.

The politic play of Pierrefonds

For the Emperor, the reconstruction of Pierrefonds should pay tribute to the military spirit of the French nation. Napoleon III wanted that his regime to symbolise patriotism and the military grandeur of France. An amateur archaeologist, he also had a passion for military architecture. In the manner of the reconstruction of the Haut-Kœnigsbourg Castle (Alsace) which would be undertaken thirty years later by Kaiser William II, Pierrefonds was meant to glorify the nation through grand architecture to which Gothic art lent itself to perfection.

The restoration of Pierrefonds also influenced other European castles such as the Neuschwanstein in Germany, built by King Ludwig II of Bavaria, following his visit to Pierrefonds in 1867.

Pierrefonds Castle is situated at the extremity of a narrow spur above the village of Pierrefonds and its small lake.

The fortified ensemble features the complete defensive system of a medieval stronghold (in the shape of an irregular quadrilateral flanked by eight towers with each angle surrounding and protecting the keep), as well as a seigniorial logis housing the imperial apartments recreated by Viollet-le-Duc.

Outside of the castle, the visitor finds a park (designed by Viollet-le-Duc) which offers a great view over the fortifications.

The ramparts of the castle feature exceptional dimensions: a length of 103 metres and a width of 88 metres. The curtain walls are 29 metres high.

A walk along the chemins de ronde enables the visitor to observe the machicolations, crenels and arrow slits from which the occupants used to throw projectiles or arrows.

The entrance to the castle is located in the weakest part of the rampart, protected by several juxtaposed defences: a portcullis, a drawbridge, moats and chatelets added by Viollet-le-Duc.

The keep, at the heart of the defensive system of medieval castles, forms part of the rampart. The addition of the imperial apartments did not alter the medieval and fortified character of the castle.

Notice that at the top of each tower is a niche containing a statue of a paladin and that a representation of the Annunciation is engraved between the two main towers of the castle’s façade.

Once the drawbridge is crossed, the visitor reaches the Great Courtyard with a setting inspired by the Renaissance.

This courtyard is surrounded by several buildings:

❖ The North-West wing, comprising the main building housing the ceremonial rooms, is a replica of the Louis XII wing of Blois Castle in the Loire Valley. The famous Room of Preuses which houses the souvenir of the sumptuous parties of the Second Empire, and the Salle des chasses (an antechamber for weapons).

❖ The Kitchen wing and its belfry.

❖ The chapel and the Courtyard of Provisions. The chapel features a unique element in France: it is the only sanctuary to have a gallery above the choir.

❖ The Keep, housing the imperial apartments. The beautiful Salon de Réception on the ground floor is richly decorated. The sculptures and panelling on the ceiling, inspired by the plant world, strangely herald Art Nouveau although installed almost 50 years earlier. On the first floor, the Emperor’s Chamber is decorated with a painted frieze depicting scenes of a knight’s life in the 14th century. On the same floor, the Emperor’s cabinet (with uncompleted decoration) and the Emperor’s cloakroom contain panelling with sculptures on the highest parts.

Since 1953, the castle of Pierrefonds has housed a permanent exhibition of sculptures featuring famous men and women from France’s history. Dedicated to “all the glories of France”, these recumbent statues and praying figures, kept in Versailles since their creation, were moved to Pierrefonds in the 1830s at the request of Louis-Philippe.

The site of Pierrefonds served as a filming set for several movies: Le Bossu (1959), Les Visiteurs (1993), The Messenger: The Story of Joan of Arc (1999), Les Rois Maudits (2005) and the British fantasy-adventure BBC programme Merlin.

For more information on visiting Pierrefonds, visit the official website of the castle: