Situated in the hinterland of Nice, picturesque Peillon is one of the most beautiful villages of the French Riviera. You’ll discover this beautiful village on an eagle’s nest on a sheer cliff. A visit to the old village offers an unforgettable journey through history. The old town invites you to stroll through its winding streets cut by vaulted passages and wide staircases. Whilst its tall old houses and its doors with their patina of age are enchanting.

Contents hide
1 Plan your trip to Peillon and the region of Nice!
2 Situation of Peillon
3 Peillon: a bit of history
3.1 The hilltop village in the Middle-Ages
4 Peillon: The Old Village
4.1 The visit to the hilltop village
4.2 Place Arnulf and the fountain
4.3 The village church
4.4 The Chapel of the White Penitents
4.5 The chapel of Saint-Roch and the oratory of La Merla
4.6 The oratories and calvaries of Peillon
5 The valley and Sainte-Thècle
5.1 The museum of railway heritage
5.2 The Sainte-Thècle Springs
6 English-French Vocabulary
7 Pin it for later!

Plan your trip to Peillon and the region of Nice!

Peillon lies only 20 km north of Nice in the Prealps of Nice. The commune is crossed by the D21 road that links Nice to L’Escarène and Peille.

Peillon is a commune comprising of 6 hamlets:

In the valley of the Paillon de l’Escarène, Sainte-Thècle serves as the chief-town. This is where you’ll find the town-hall, the post office and the railway station. From Sainte-Thècle (altitude 181 m), the “Route du Vieux Village” (Old Village Road) with its hairpins leads up to the entrance to the old village at 372 m where you’ll find a few parking spaces.

Peillon: a bit of history

Until the village became part of France in 1860, the official name was Peglione in Italian.

The hilltop village in the Middle-Ages

Peillon is one of the many villages in the hinterland of Nice that are built on rocky peaks. This enabled the inhabitants to protect themselves from invasions and looting in the Middle Ages. To reinforce their security, the villagers built their houses tightly together to form a rampart and surround the castle that dominated them.

Until 1235, Peillon belonged to the territory of the neighbouring village of Peille.

In 1388, Peillon came under the authority of the House of Savoy. The village became French during the French Revolution and the Napoleonic Era.

From 1814 to 1860, Peillon and the County of Nice belonged to the Kingdom of Piedmont-Sardinia.

After the referendum of 1860, the whole region joined France.

The village, which has retained its authenticity, occupies a rocky spur over a steep ravine. It is only with a little distance that one can see how tightly packed the settlement is.

The village itself is pedestrian and as you can imagine, it was not designed for cars Therefore you can explore Peillon on foot, wandering up and down the narrow little streets whose houses seem to cling to the rock.

The visit to the hilltop village

The narrow streets, with their staircases and vaulted bridges, contain several treasures of heritage. These treasures have earned the village of Peillon the title of one of the most beautiful perched villages in France:

Place Arnulf and the fountain

The visit of Peillon begins with the Place Arnulf. The fountain dates from 1800 and draws water from several springs.

Inside the village, the winding streets are mostly made up of stairways with arcades spanning them. They lead up to the top of the village where the church stands. The street of Peillon with stairs and vaulted passages © Mossot – licence [CC BY-SA 3.0] from Wikimedia Commons

An old street in the village © Mossot – licence [CC BY-SA 3.0] from Wikimedia Commons 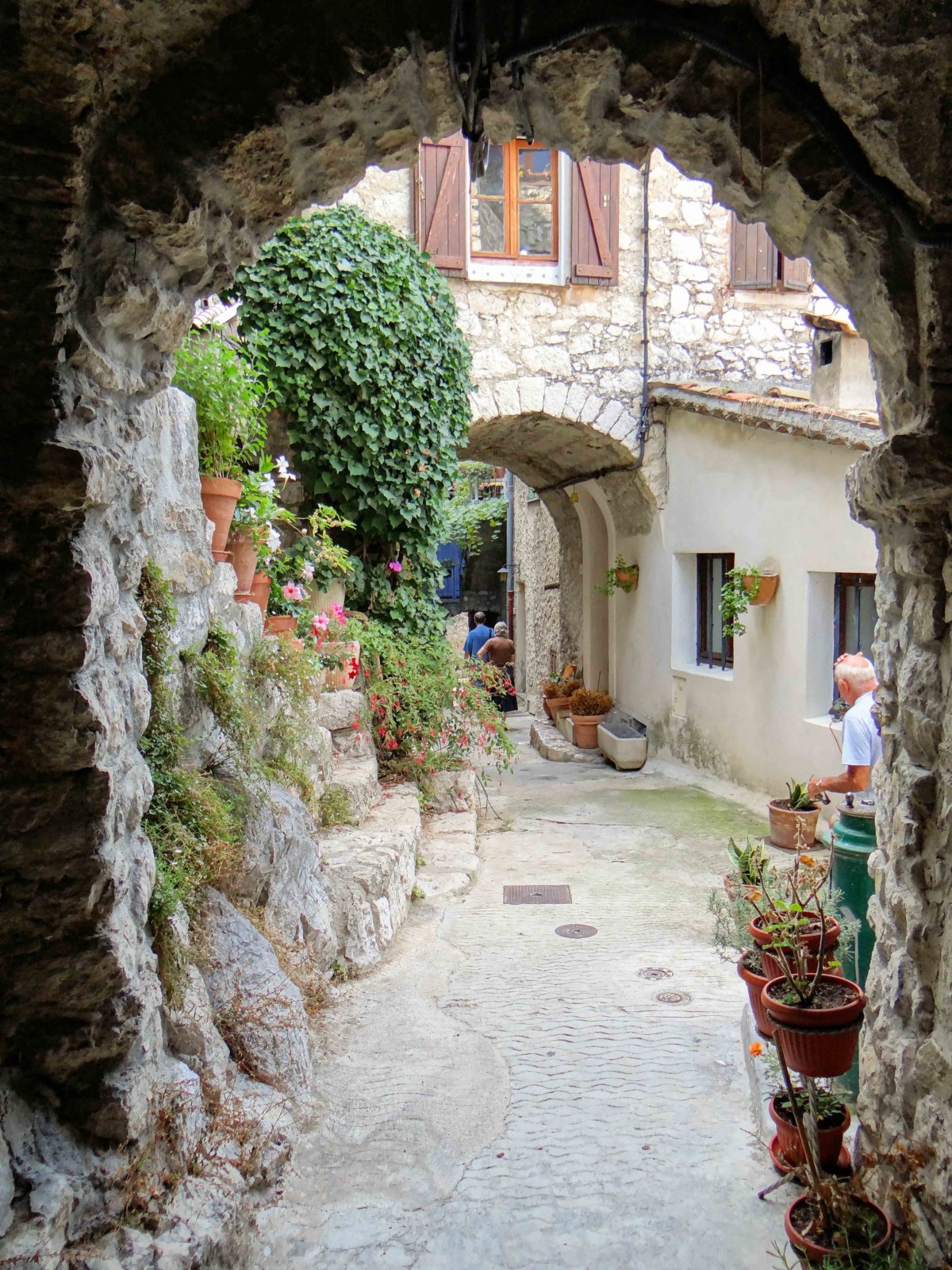 Under the arch of a narrow street © Mossot – licence [CC BY-SA 3.0] from Wikimedia Commons

At the top of the village, you will find the parish church of Saint-Sauveur (or church of the Transfiguration). 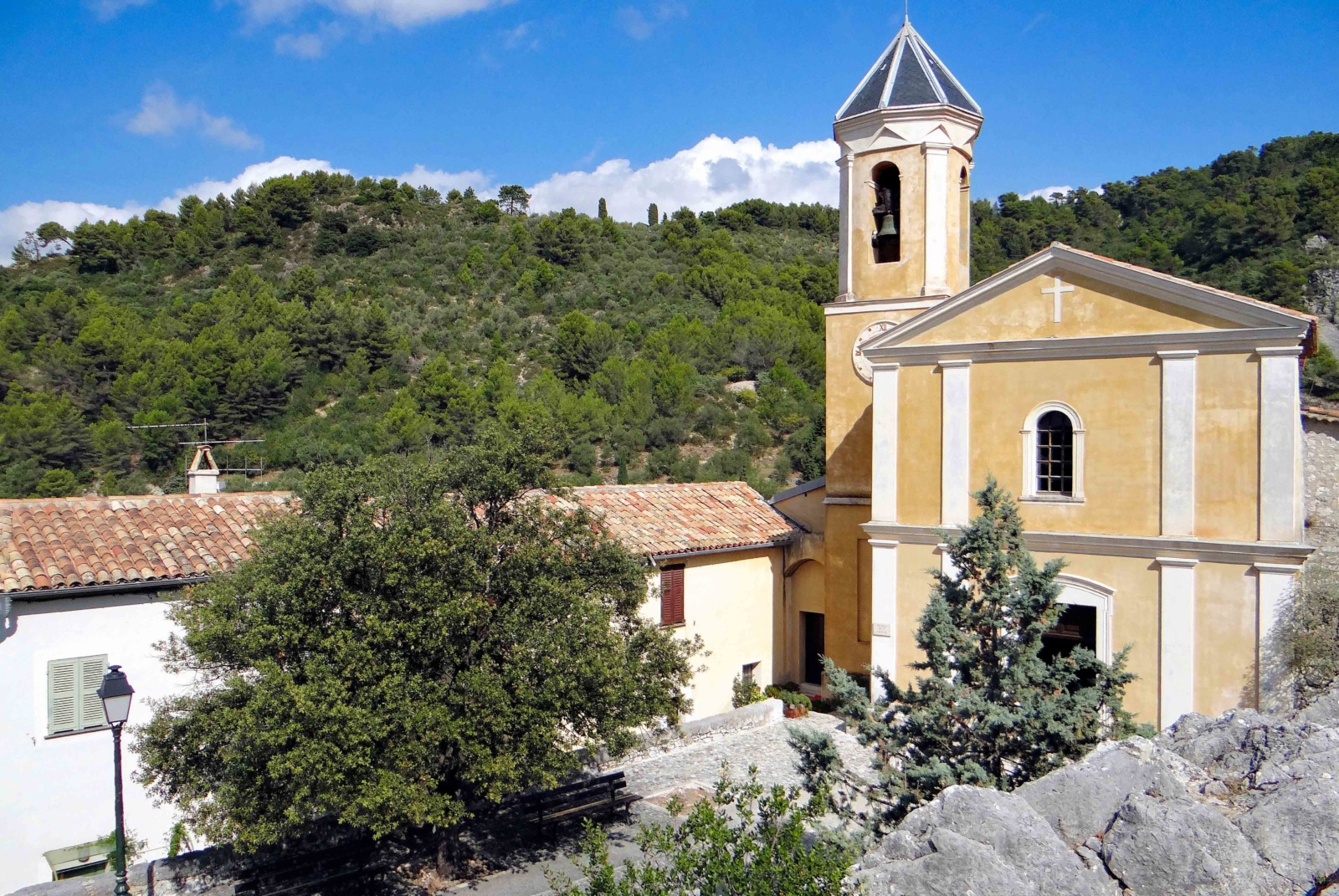 It is exactly here that a fortified castle once stood. In the 12th century, the square keep became the bell tower of the new chapel in Romanesque style.

In 1643, the present baroque church replaced the old chapel.

The neo-classical façade with its triangular pediment dates from 1772. The bell tower with a high octagonal lantern dominates the chapel.

The interior reflects the influence of the rustic baroque with its twisted columns in faux marble and trompe l’oeil windows. 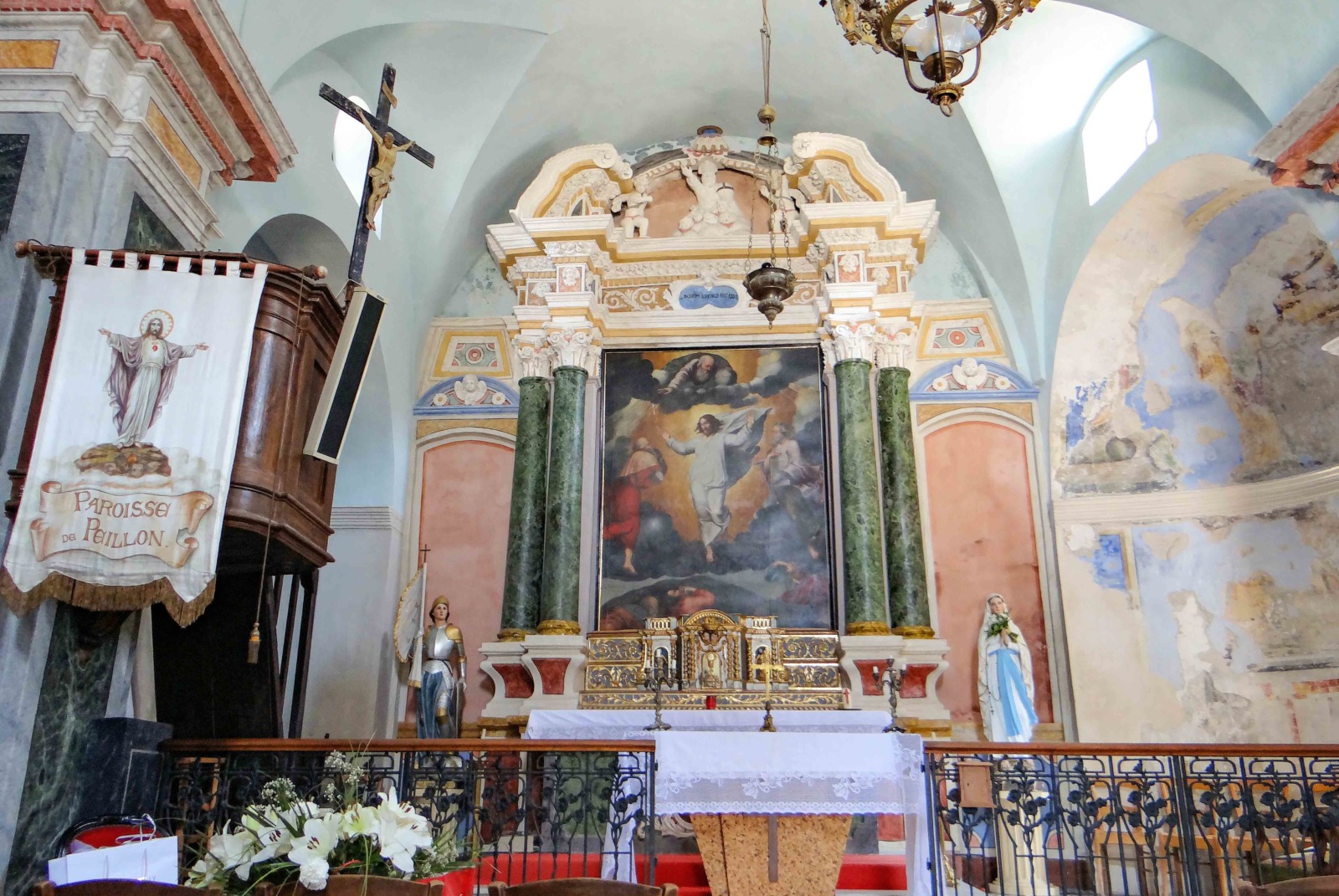 The choir of the parish church © Mossot – licence [CC BY-SA 3.0] from Wikimedia Commons

The little square in front of the sanctuary has benches and a great vista of the surroundings of Peillon made up of steep forested mountains and deep valleys.

The Chapel of the White Penitents

Below the village, the chapel of Notre-Dame des sept Douleurs or chapelle des Pénitents Blancs is a must-see. 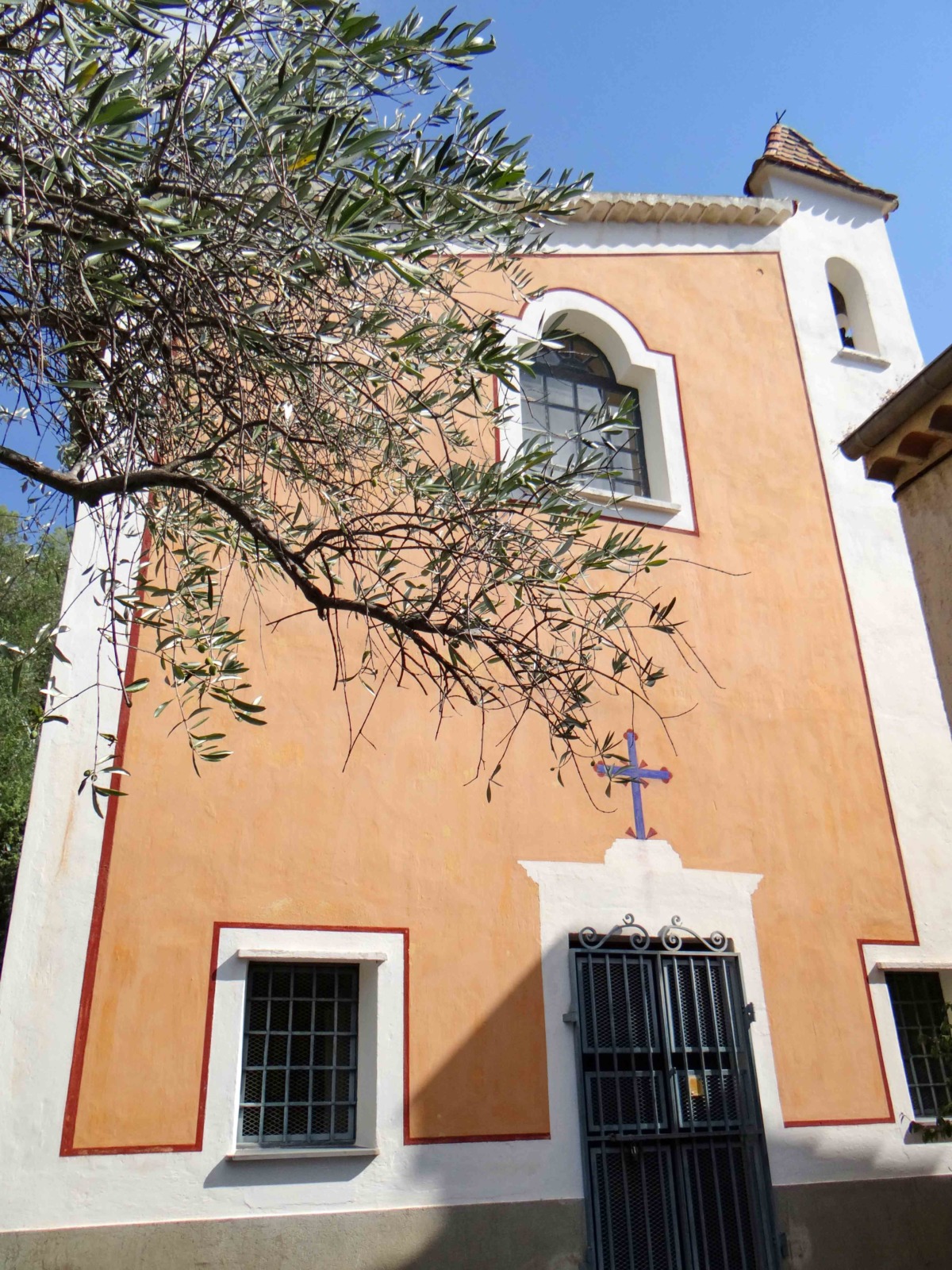 The sanctuary houses remarkable frescoes by Jean Canavesio dating from the 15th century (between 1485 and 1490). 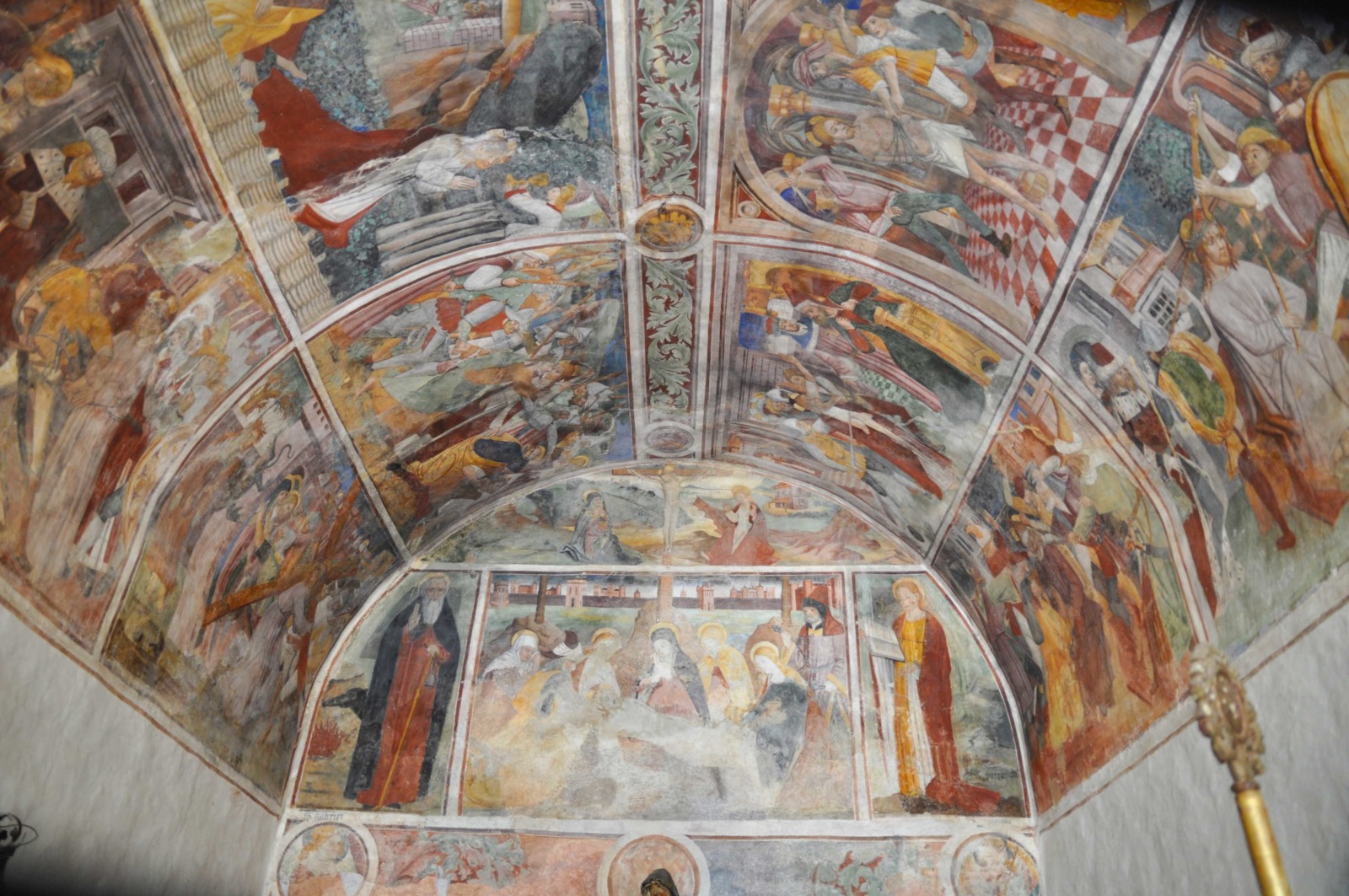 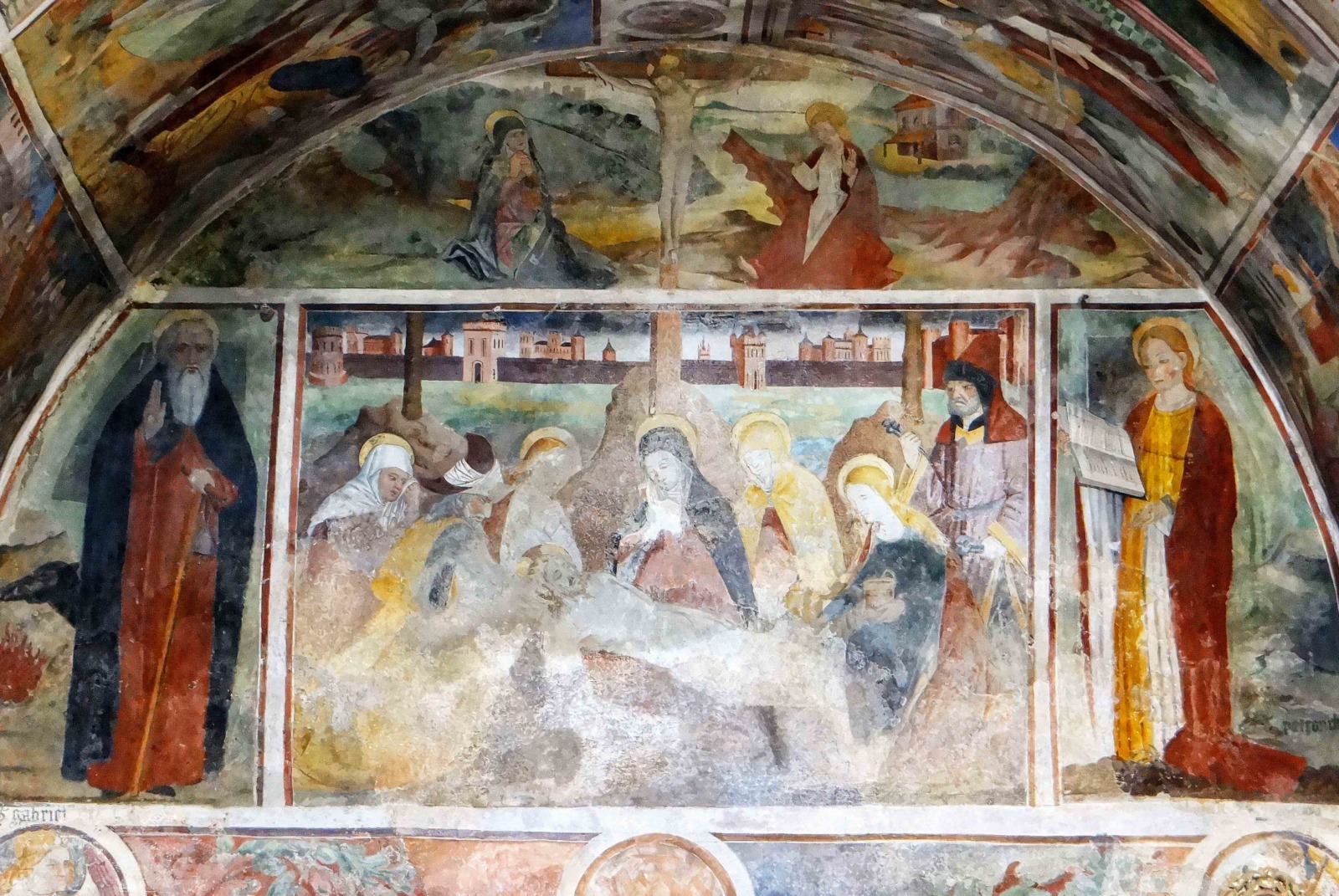 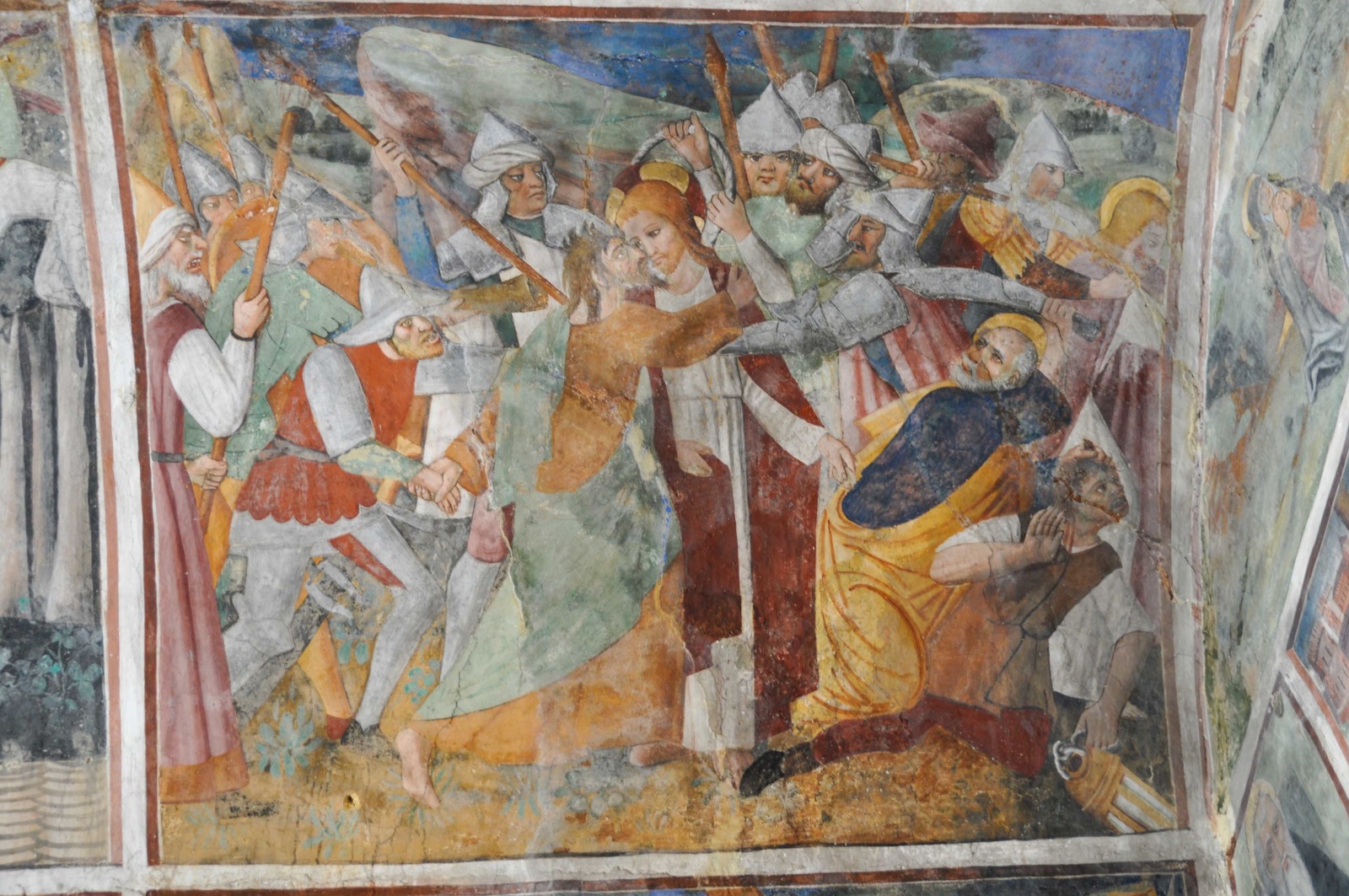 To admire the frescoes, you must insert a coin in the coin box or follow a guided tour (contact the Tourist Office of Peillon for more details).

The chapel of Saint-Roch and the oratory of La Merla

Afterwards, continue your discovery of the surroundings of the village with a short walk to the chapel of Saint Roch or to the oratory of La Merla.

The chapel of Saint Roch dates from 1580 (restored in 2004). From the path leading to the oratory, you can enjoy a magnificent view of the village.

Oratories are small chapels used for prayer. They house the statue of a saint.

Finally, the many walking and hiking trails in the surrounding area allow you to discover the unique site of the hilltop village of Peillon. Finally, unlike other attractive villages, Peillon is free of gift shops, cafés and restaurants which makes the visit of the authentic village much more agreeable.

In the green, wooded and cultivated valley, a unique network of irrigation canals runs through the whole commune. There you can still visit the old hydraulic oil and flour mills, which are remarkably well preserved.

In 1948, the hamlet of Sainte-Thècle in the valley became the seat of the village administration. 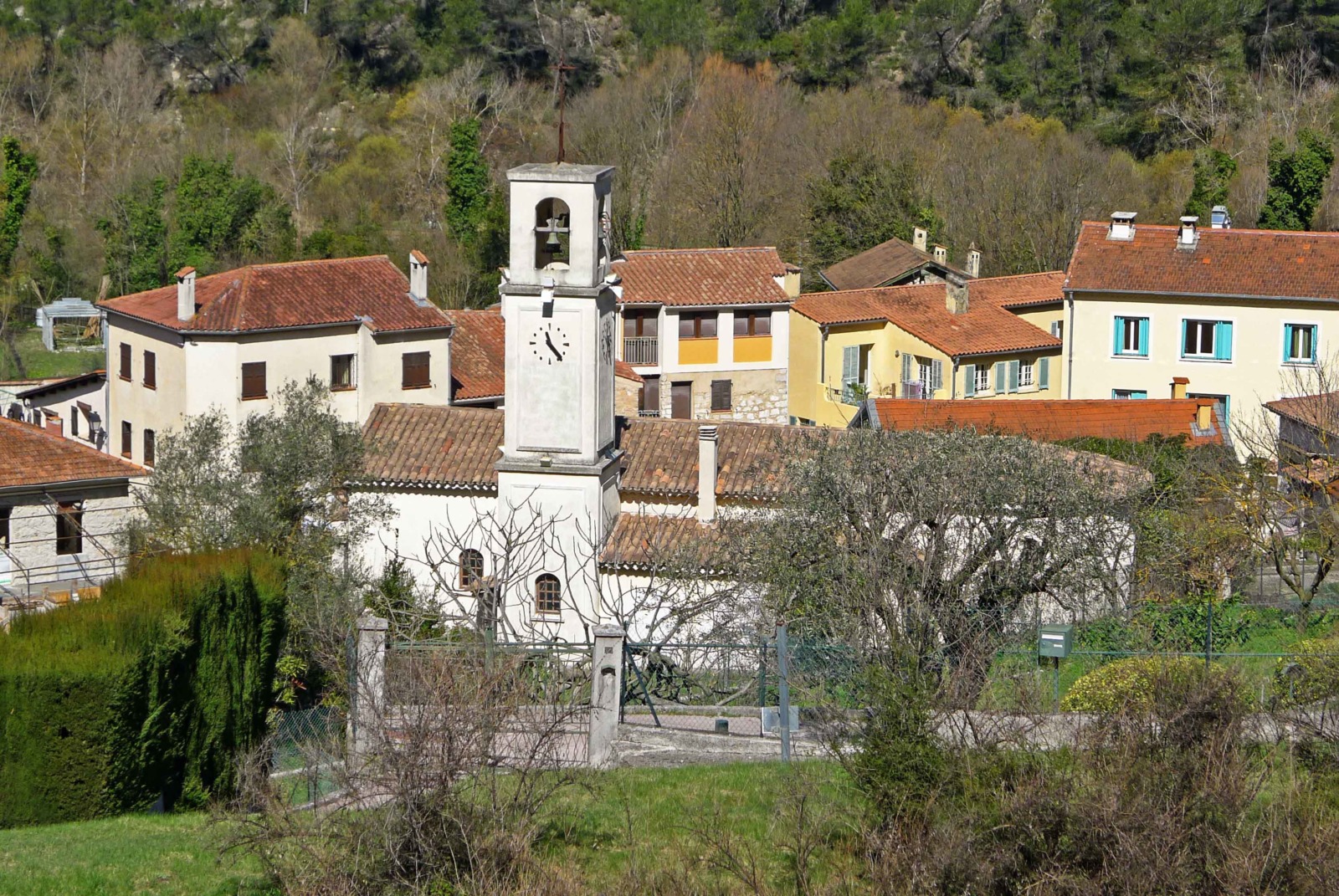 The museum of railway heritage

In Sainte-Thècle, the museum of railway heritage “Flaminius Raiberti” occupies the old station, renovated in its original form of 1928.

The museum allows you to discover the spectacular Nice-Cuneo railway line. You will discover objects that were part of the railwayman’s luggage and documents from the period.

If you are an amateur, enthusiast, professional or simply curious, the museum is the best place to understand the life of the railways in the Maritime Alps.

The Sainte-Thècle springs played a historic role in the first drinking water supply for the city of Nice.

In 1860, the Sardinian administration was already interested in the Sainte-Thècle springs with a view to supplying the City of Nice, but this did not materialise.

In 1864, the City of Nice approved a project to tap these springs and build a 15-kilometre canal from Peillon to Nice.

Napoleon III gave his approval for the work, which was completed one year later, in 1868. Of the three catchments created on the mainsprings, only one is still in operation today. It has supplied the commune of Peillon since 1954. 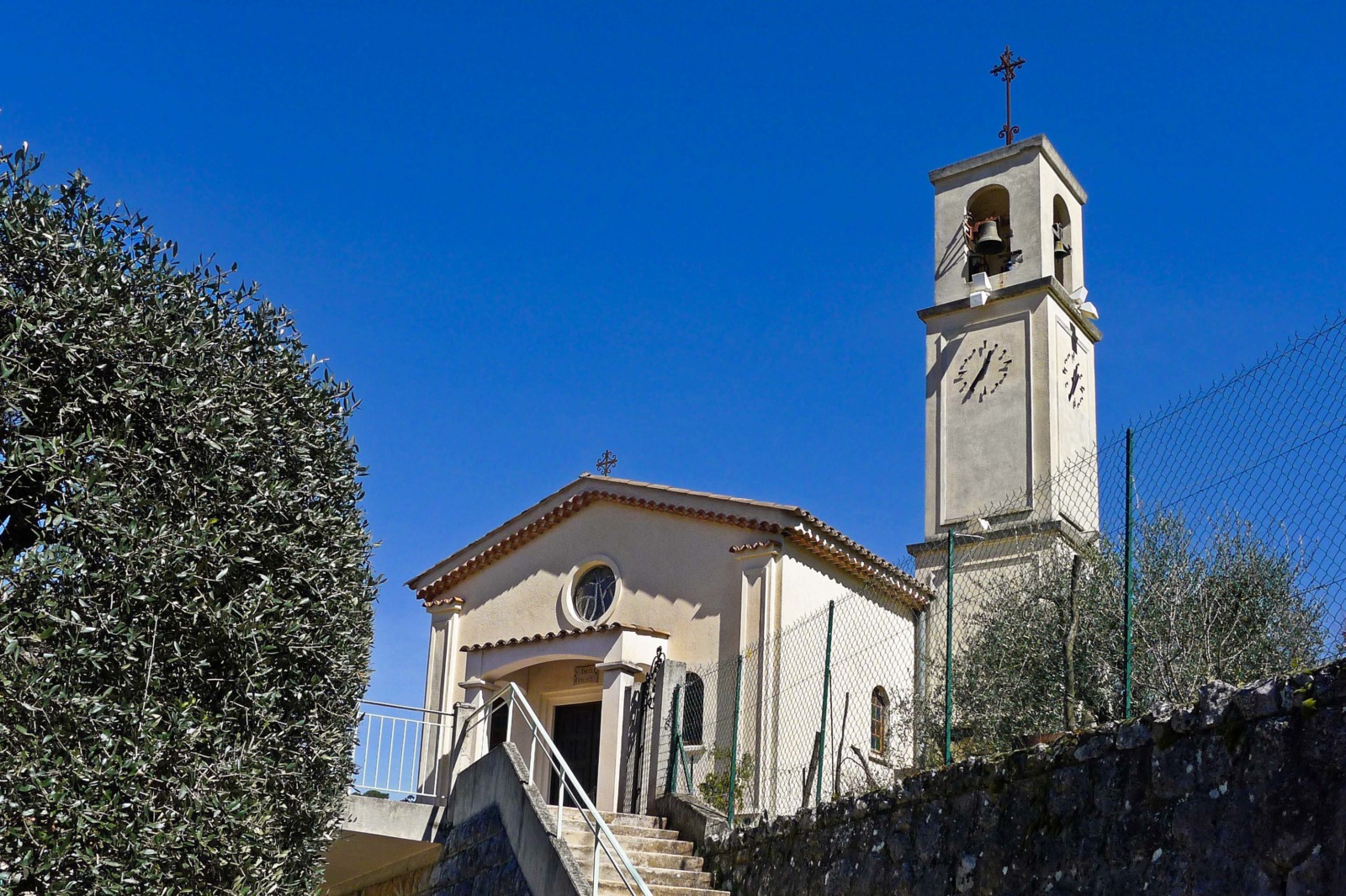