The City Hall of Paris (Hôtel de Ville de Paris) is one of the most popular monuments in the French capital. Situated near the banks of River Seine in the 4th arrondissement, the historic building has been the seat of the city’s council since 1977.

The first building on the site was designed in the Renaissance style from 1553 to 1628.

During the troublesome events of the Paris Commune in 1871, a fire destroyed the building except for parts of the façades. 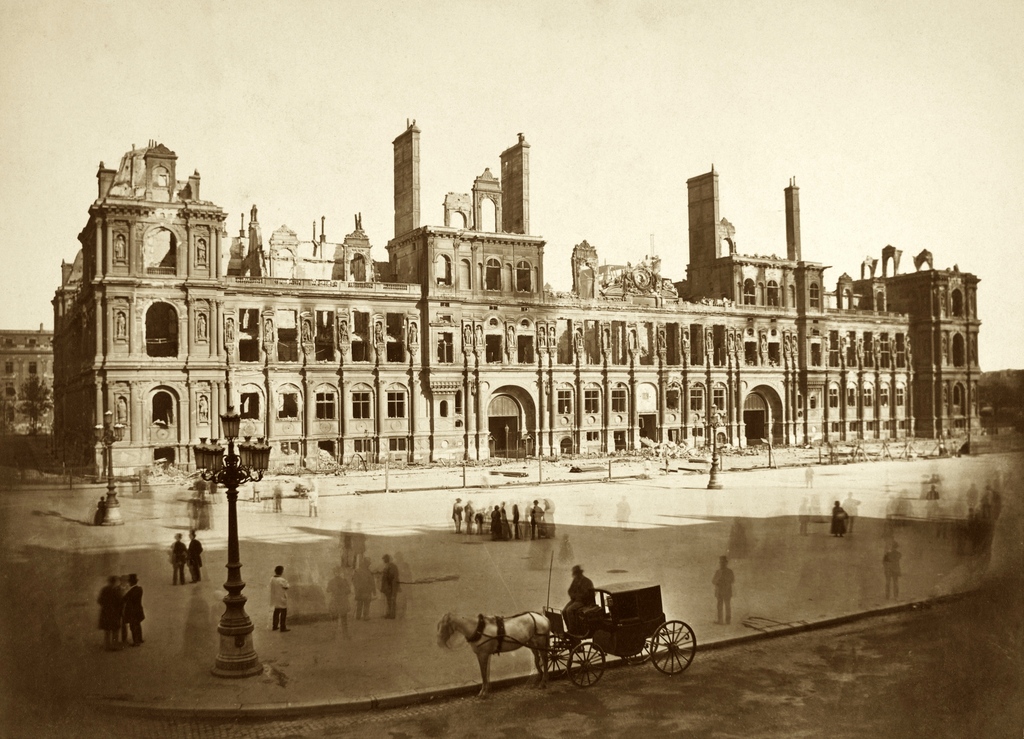 Paris City-Hall burnt down in 1871

The City Hall was entirely rebuilt between 1874 and 1882 by architects Ballu and Desperthes in florid neo-Renaissance style. Modelled on the previous building, it also resembles the chateaux of the Loire with its steep roofs and elaborate stonework, statues and turrets.

At the Liberation of Paris on the 25th August 1944, General de Gaulle made a famous rousing speech from the great balcony of the City-Hall:

The monumental façade features 338 individual statues of illustrious Parisians, as well as lions and other sculptural elements.

On the South side on the garden wall stand the equestrian statue of Etienne Marcel, an important historic Parisian character lynched in 1358.

The interior of the City-Hall can be visited by groups under certain conditions. It features magnificent halls which welcome elaborate banquets and receptions. 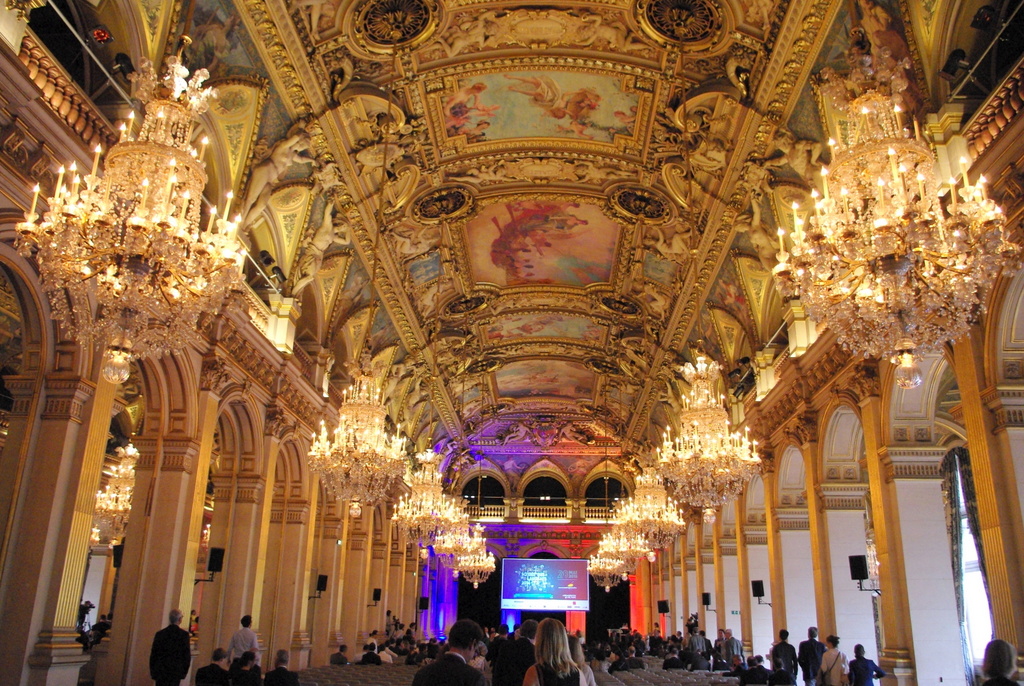 The Salle des Fêtes is a long ballroom richly ornate which was designed as a Republican replica of Versailles’ Hall of Mirrors. The ceiling of the hall has frescoes representing sixteen provinces of France. 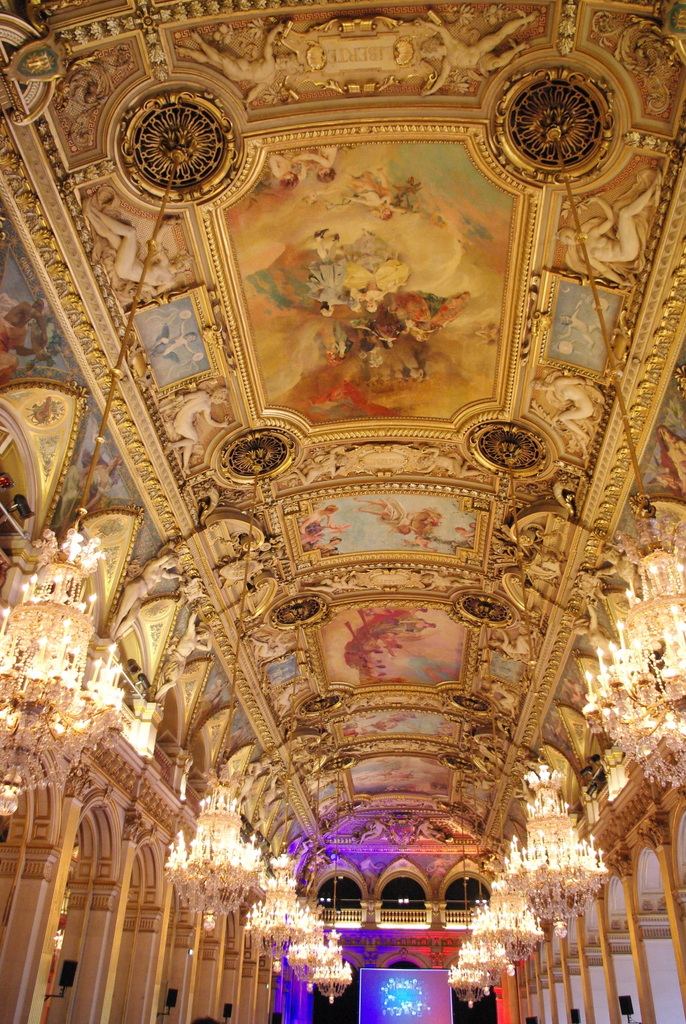 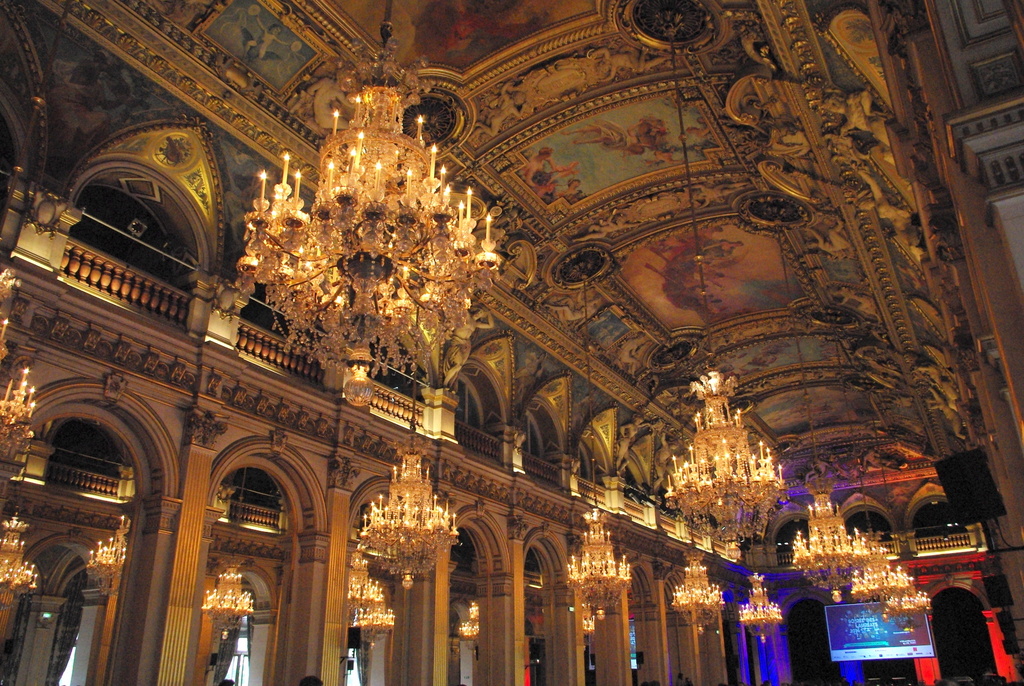 The adjoining salons, lavishly decorated in the 1880s, are devoted to science, literature and the arts. 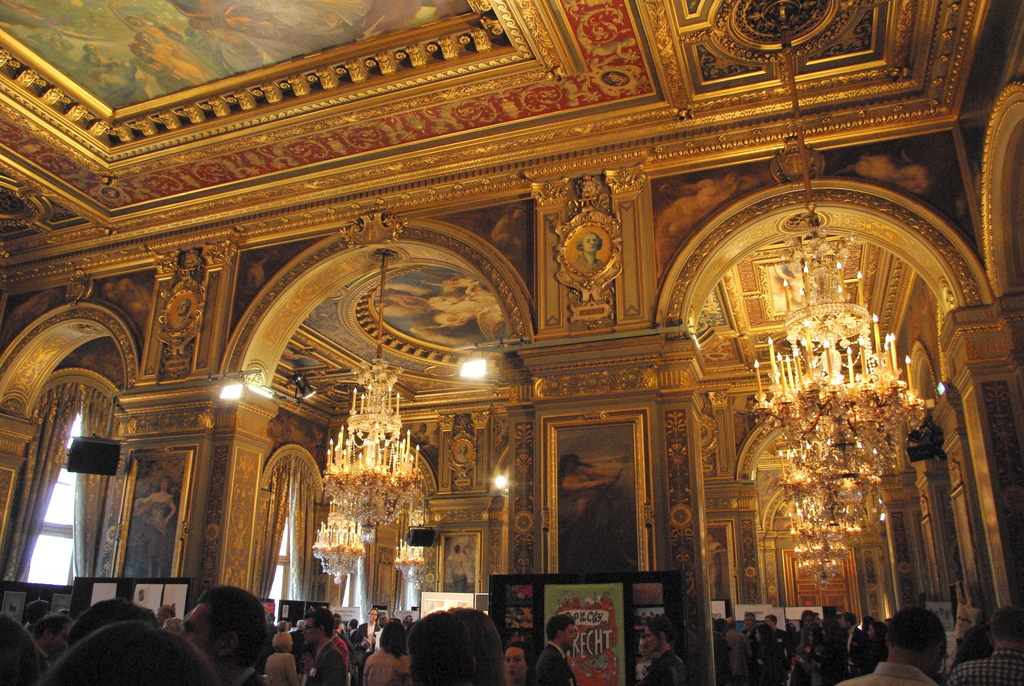 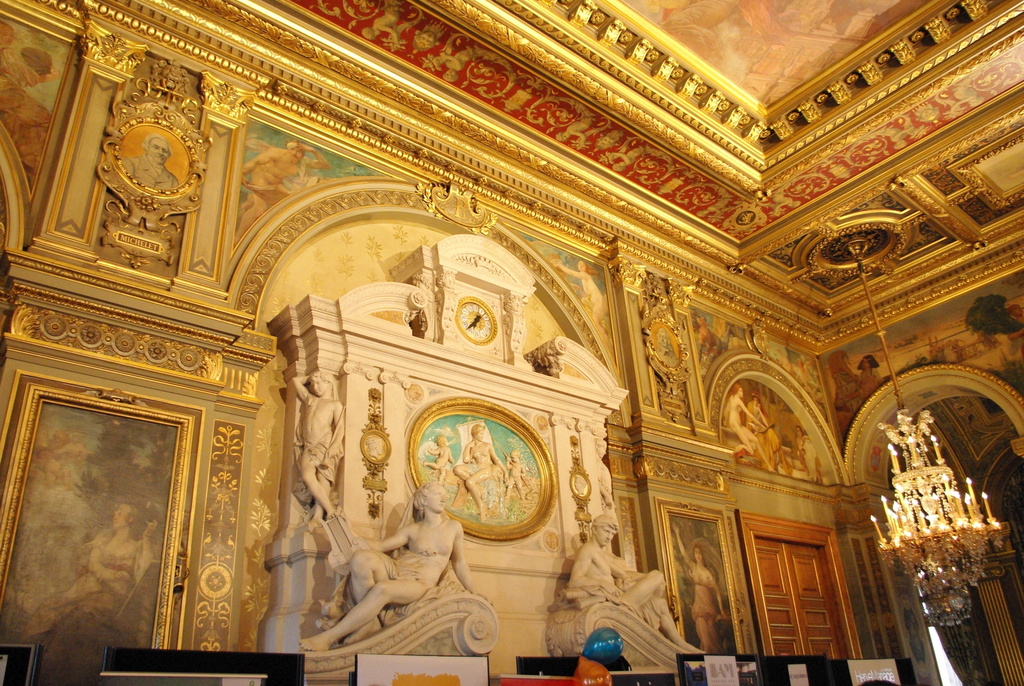 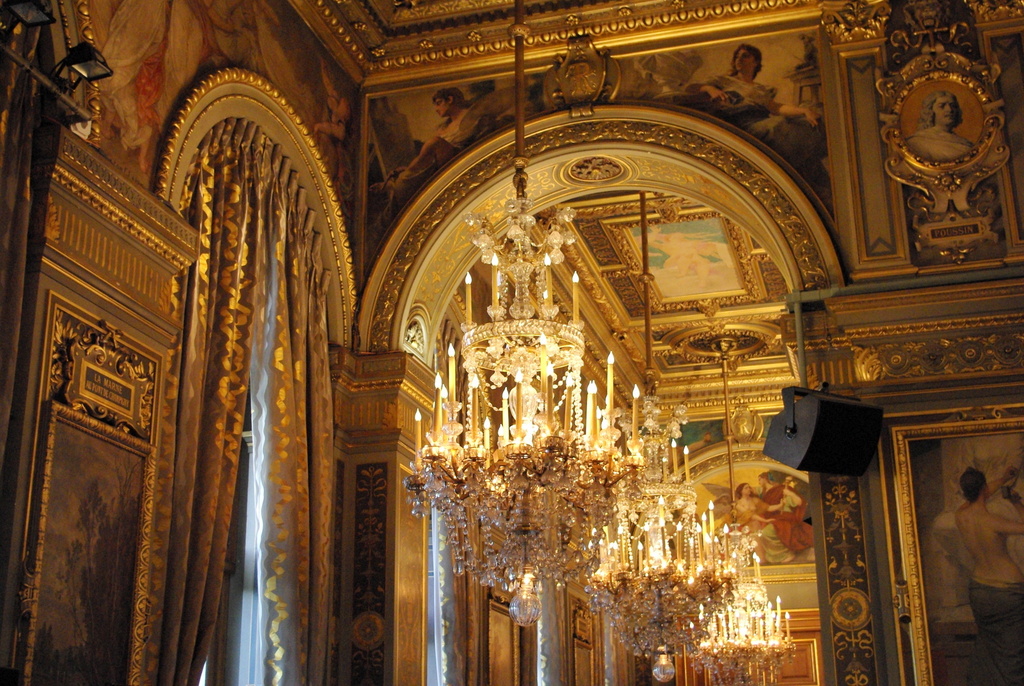 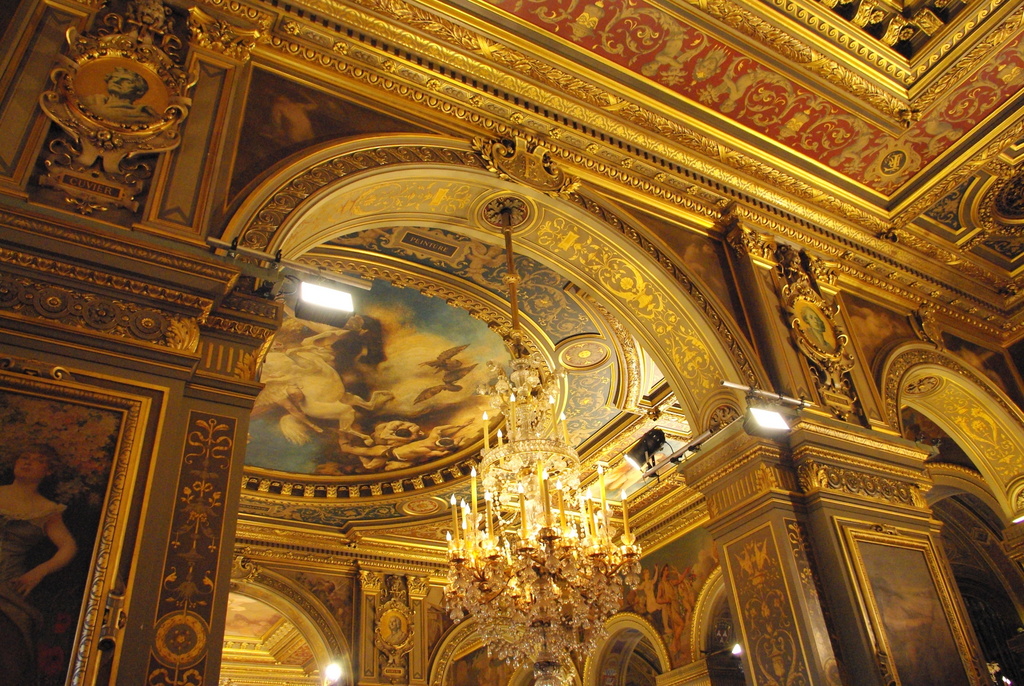 All the chandeliers were designed by the fine crystal manufactory of Baccarat in Lorraine. 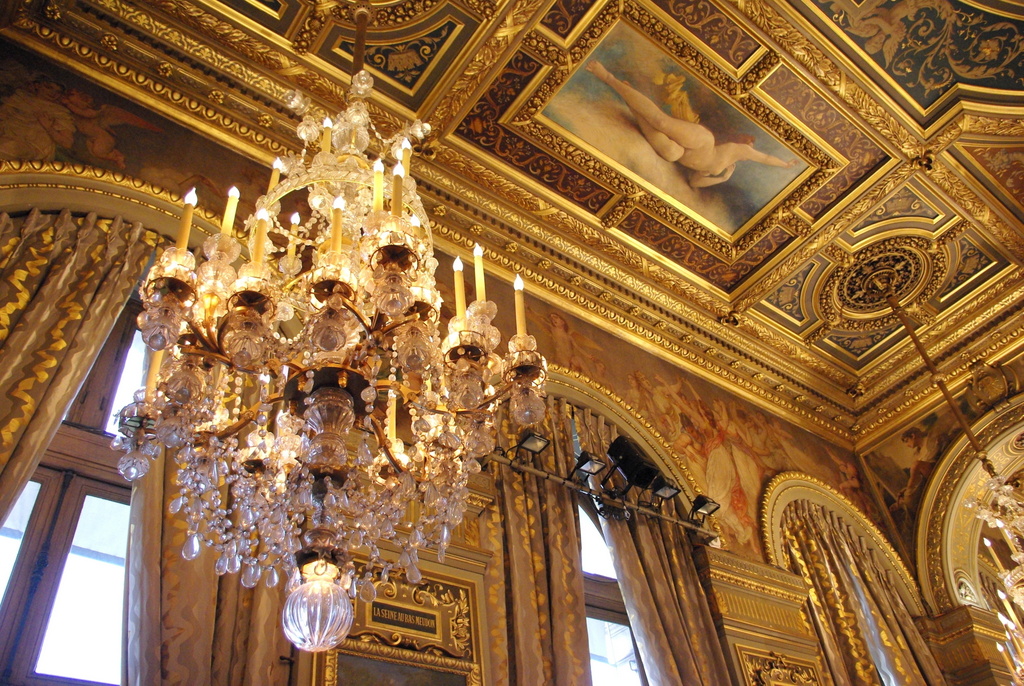 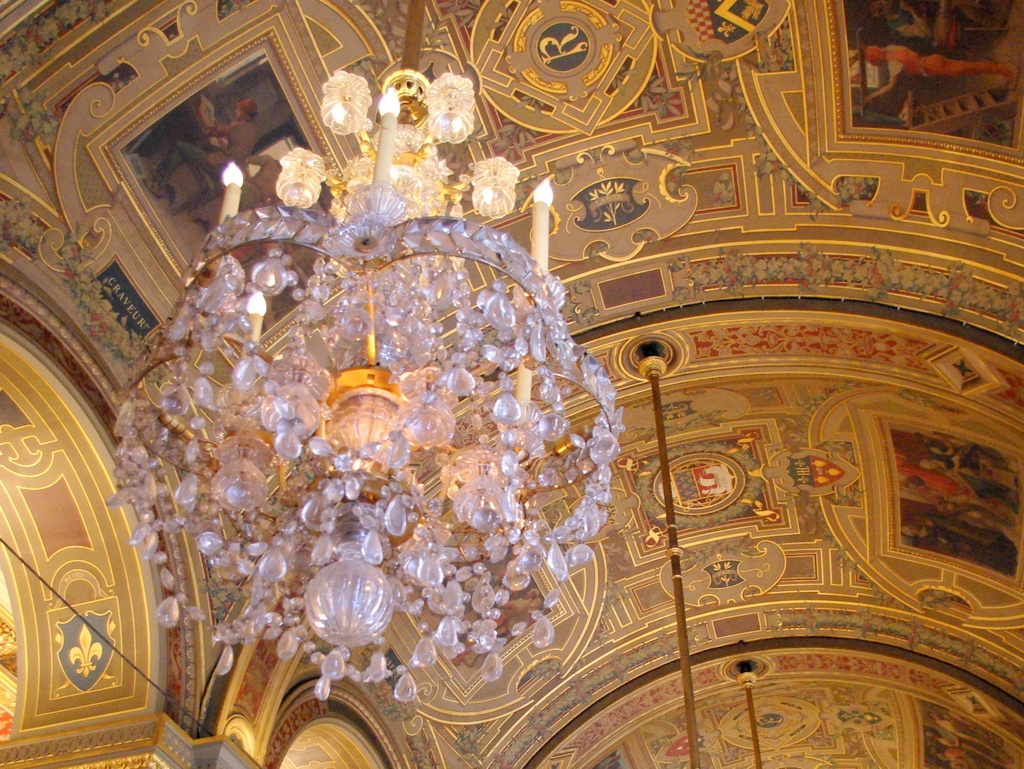 The City Hall borders the East side of the Place de l’Hôtel de Ville. The square was known as Place de Grève (Square of the strand) until 1830 when it bordered the banks of River Seine.

During the Middle-Ages, the foreshore was a meeting place for the unemployed. Today ‘faire la grève’ means ’to go on strike’.

The square was also the site where bourgeois and Parisians were hanged or beheaded by the axe or the sword, witches and heretics were burnt at the stake and murderers tortured and dismembered. On this square, Ravaillac, King Henri IV’s assassin was quartered alive by four strong horses.

Today the square is a popular meeting place for big sportive events displayed on big screens, and for welcoming Paris’ largest open-air ice-skating rink from December to March.