Top Places to See on a Paris by Night Tour

Top Places to See on a Paris by Night Tour

Both in Winter and Summer, the City of lights stays lively all night long. You may want to discover Paris comfortably seated on a tourist bus or on a cruise. Although these are great ideas, my favourite way to explore the Parisian monuments, sites and bridges is to walk along the river banks of the Seine. Follow this Paris by night tour from the eastern tip of Île Saint-Louis towards the Eiffel Tower. You’ll discover the magic of Paris – an unforgettable experience!

Paris by night tour: along the River Seine

The entire itinerary can be done in three to four hours depending on how long you stop to take photos ;-).

Start the Paris by night tour at dusk. From the Square Henri Galli (1), head to the Île Saint-Louis by walking on the Pont de Sully. The view extends to the eastern districts of Paris (Bercy and the National Library). Turn right on Quai de Béthune.

At the Pont de la Tournelle (2), walk halfway on the bridge to admire the view on the chevet of Notre-Dame cathedral.

Step back to the Île Saint-Louis and continue walking along the high quay. You are now walking along Quai d’Orléans. Fine views of the chevet of Notre-Dame, the Panthéon and the tip of the Eiffel Tower in the distance.

Cross the Seine at the Pont Saint-Louis (3) to reach the Île de la Cité.

Continue walking on rue du cloître Notre-Dame. Once at the forecourt of Notre-Dame (4) admire the stunning façade of the Gothic cathedral.

Then take on rue d’Arcole in the direction of the Seine.

Cross the bridge of Pont d’Arcole (5) to reach the Right Bank and the Paris City Hall (6).

Opposite is the medieval structure of the Conciergerie (7) and behind it the spire of the Sainte-Chapelle.

In the distance, the blue laser light of the Eiffel Tower lights up the sky.

>> Get your Tickets for Conciergerie and Sainte-Chapelle: Priority Entrance! <<

Turn left at the Pont-Neuf (8) which spans the Seine in two parts. Cross the entire bridge to reach the Left Bank.

At the end of the bridge, turn right onto Quai de Conti. Walk about 300 metres to the Pont des Arts. To your left stands the lit up façade and cupola of the prestigious Institut de France (9).

Cross the footbridge of Pont des Arts (10) to your right. This is one of Paris’ most romantic places. The view over the banks of the River Seine is breathtaking.

The picture postcard view stretches from the towers of Notre-Dame to the Eiffel Tower, the Pont-Neuf, the Louvre, the Institut de France, and the fantastic succession of bridges. No wonder the banks of the River Seine were listed as a World Heritage site by Unesco in 1991.

Cross the Quai François Mitterrand at the pedestrian crossing and head to the Louvre.

This is another highlight of the walk. The first courtyard – Cour carrée (11) is beautifully lit up.

Turn left and go under the porch to reach the other courtyard: Cour Napoléon (12).

At the centre of the courtyard stands the famous glass pyramid with a soft light emanating from the inside. All the façades of the Louvre Palace are illuminated, as is the Arc de Triomphe du Carrousel (13).

The Tuileries Garden is usually closed at this time of the night. Turn right onto rue de Rivoli (14).

>> Get your Tickets for the Louvre: Skip The Line and meet Mona Lisa! <<

When on rue du Rivoli, turn left in direction of place de la Concorde. The arcaded street borders the whole length of the Tuileries Garden. You will pass by upscale hotels whose façades are lit up.

Several long blocks later you’ll reach the place de la Concorde. You are barely at the halfway point of the Paris by night tour.

Built as a royal square by Louis XV in the 18th century, place de la Concorde (15) witnessed many major events of French history. Including the beheadings of Louis XVI and Marie-Antoinette at the guillotine.

At the centre of the square stands Paris’ oldest monument: the Luxor obelisk. The Egyptian needle is flanked at either end by two monumental fountains with stone basins.

Stand by the obelisk to enjoy part of the stunning perspective of the Historical Axis of Paris: the Champs-Élysées leading to the majestic Arc de Triomphe.

In the past, the Paris Ferris Wheel provided a great view of the City of Lights.

Walk halfway on the Pont de la Concorde (16). Built with stones from the Bastille fortress, the bridge offers fine views of Notre-Dame and the Île de la Cité…

… and the Pont Alexandre III and the Eiffel Tower:

Step back and turn left. Walk along the high quay of Cours-la-Reine. You’ll get spectacular views of the Pont Alexandre III and the Eiffel Tower in the distance. This is one of my favourite spots for shooting night-time photos of Paris.

The single-span steel arch of Pont Alexandre III (17) was built in the Belle Époque era (beginning of the 20th century). The bridge is lined with extravagant Art Nouveau lampposts and statues of cherubs, nymphs, lions and winged horses. Great views over the Invalides, the Grand-Palais, the Petit-Palais and, of course, the Eiffel Tower!

Towards the Eiffel Tower

Divert onto the metallic footbridge of Passerelle Debilly (19).

On the Left Bank, head towards the Eiffel Tower through the Esplanade David Ben Gourion (20).

At the Eiffel Tower (21), turn right onto the Pont d’Iéna (22). Head to the top terrace of the Trocadéro between the two wings of the Palais de Chaillot.

Make sure you look behind you from time to time to admire the Eiffel Tower!

From the Esplanade du Trocadéro (23), you’ll be spoiled with one of Paris’ most famous views… another picture postcard view but hey, it would be a shame to leave Paris without seeing it at least once in your lifetime!

From the end of the esplanade, the entrance to the métro station Trocadéro is to your right. As for me, I’ll say goodbye before taking the métro that will lead me back home to Maisons-Laffitte. Thanks for reading so far and I hope you’ll enjoy this Paris by-night tour!

If you wish to shorten the walk (6 km), stop at Pont Alexandre III and head for the nearest métro stations:

Looking for a great guide to Paris? We bought The Rough Guide to Paris and found what we needed to know for discovering the must-sees to the more offbeat sites of the French capital. The guide gives an accurate practical information on everything from public transport to opening hours and museum passes. 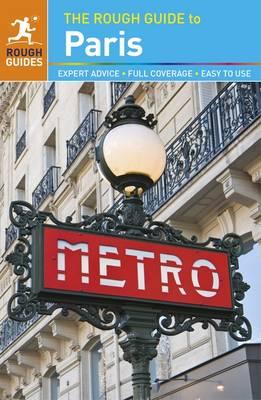