New posts
You are at:Home»Mountains of France»Alps»The fabulous onion dome steeples of Savoy

They are a characteristic part of the landscape of Savoy and give a resolutely cheerful and baroque touch to the background of snow-capped mountains. The onion dome steeples of Savoy are fabulous and graceful structures of which I propose to find the most beautiful examples, from the banks of Lake Geneva to the Tarentaise Valley!

The onion dome steeples of Savoy

There are all kinds. Onion dome steeples or spires are sometimes covered with rusted copper, sometimes with fine scales of white iron… and even with titanium plates as in Chamonix.

The onion-shaped spires of many catholic churches in the Alps are a characteristic part of the landscape of Savoy.

What is a bulbous bell tower?

The French Wikipedia site gives us a description:

In Savoy, in particular, a large number of bell towers are dominated by a bulb – or onion-, followed by a lantern and a steeple.

There are several variations of bulbous bell towers in Savoie. There is the single onion bell tower and the double onion!

Let’s take the example of the church of Saint-Nicolas in Combloux, whose bell tower is typical of Alpine bulbous art and one of the most majestic in the region. The bell tower reaches a height of 45 meters.

Above a small roof are superimposed : The metal cover is made of thousands of tinted stainless steel plates. They give it its beautiful patinated aspect.

The bell tower was destroyed during the French Revolution and then rebuilt by the parishioners in 1828 according to the plans of Claude François Amoudruz, an architect from Samoëns. It was classified as a historical monument in 1971.

But before I show you some of the most beautiful bell towers, let’s ask ourselves the question of their origin!

Where do the bulbous bell towers of Savoy come from?

For some authors, their style would perhaps find its origins in distant Byzantium. Others refer to “Saracen” architecture.

We have in mind these beautiful bell towers in Bavaria and Austria. Like this one in Grainau: Further afield, in Eastern Europe, the spires of Orthodox churches look like colourful cupcakes, like St Basil cathedral in Moscow: And let’s not forget to mention the onion domes of the famous Taj Mahal in India:

But then, why does Savoie include a significant density of bulbous bell towers? And where do they come from?

First of all, let’s remember that throughout the Middle Ages and until the 18th century, the Duchy of Savoy was a fief of the Holy Roman Empire.

It is believed that the introduction of the onion-shaped spires in the Duchy of Savoy is due to this Germanic influence, and more precisely to the migrations of the local populations towards the Germanic countries.

Savoy is a land in which Baroque art has spread and marked the culture of the time. And the onion bell towers are one of the characteristics, as well as the magnificent golden altarpieces that decorate the interior of many churches.

Oh, and then the bulbous shape had a considerable advantage in these alpine countries: the snow slides indeed on their soft and rounded forms. Practical, isn’t it? In 1687, the very first known onion dome steeple in Savoy is a drawing by Jean Cavoret for the current church of Saint-François de Sales in Annecy. A church whose bell tower does not have a bulb today!

All the bell towers of Savoy beheaded during the Revolution

In January 1794, the French government appointed Antoine Louis Albitte, a deputy to the Convention born in Dieppe, to apply the Terror in Savoy and in the Ain département.

In the decree of January 26 of the same year, the “Robespierre of Savoy” ordered that all religious objects found in churches or outside, on the roads or in public places, be removed or destroyed without delay.

This also concerned the bell towers.

They were therefore cut down and the bells that were in them were taken down to be melted down and transformed into cannons or coins.

The terrible events of the Revolution explain why the majority of the onion dome steeples of Savoy that we can admire today only date from the 19th century. Some of them replaced bell towers that were pyramidal at the time. The church of Bozel © French Moments

The revival of bulbous bell towers in Savoie began with the construction of the church of Montriond in 1802. Then followed other sanctuaries: Morzine in 1803, Chamonix in 1807, Abondance in 1811 and Saint Gervais in 1819.

The bulbous bell tower of Onnion (a predestined name!), built in 1887 was the last one in Haute-Savoie.

Building an onion dome steeple was a costly undertaking. Thus, only the mountain communities that had both communal woods and mountain pastures could afford it. The church of Landry © French Moments

Where to find bulbous bell towers in Savoie?

No doubt you will see these famous bulbous steeples when you cross the Savoy region.

In particular, there is a high concentration of them in the Chablais, the Faucigny, the Giffre valley, the Beaufortain, the Val d’Arly and the Tarentaise (lower and middle valley). The village of Bellentre © French Moments

On the other hand, you will not find any in the Maurienne Valley, nor in the neighbouring Dauphiny, which, let’s remember, was dependent on the French Crown.

The most beautiful bulbous bell towers of Savoie

I won’t surprise you if I tell you that I haven’t seen all the onion dome steeples of Savoy!

However, I have seen and photographed many of them during the years we lived in the region. Here is a small selection, in Haute-Savoie (74) and in Savoie (73)… (communes classified in alphabetical order) The bell tower of Saint-Gras church in Conflans © French Moments The village of Arêches © French Moments

Church of Sainte-Maxime in Beaufort in the Beaufortain. The bell-tower of Beaufort-sur-Doron © French Moments The bell-tower of Bellentre © French Moments Church of Notre-Dame in Chambéry. The church of Combloux and Mont-Blanc © French Moments The church of Cruseilles © French Moments

Special mention for the Saint-Jacques-d’Assyrie church in Hauteluce in the Beaufortain whose 55 meters high bell tower stands in the foreground in front of the Mont Blanc. 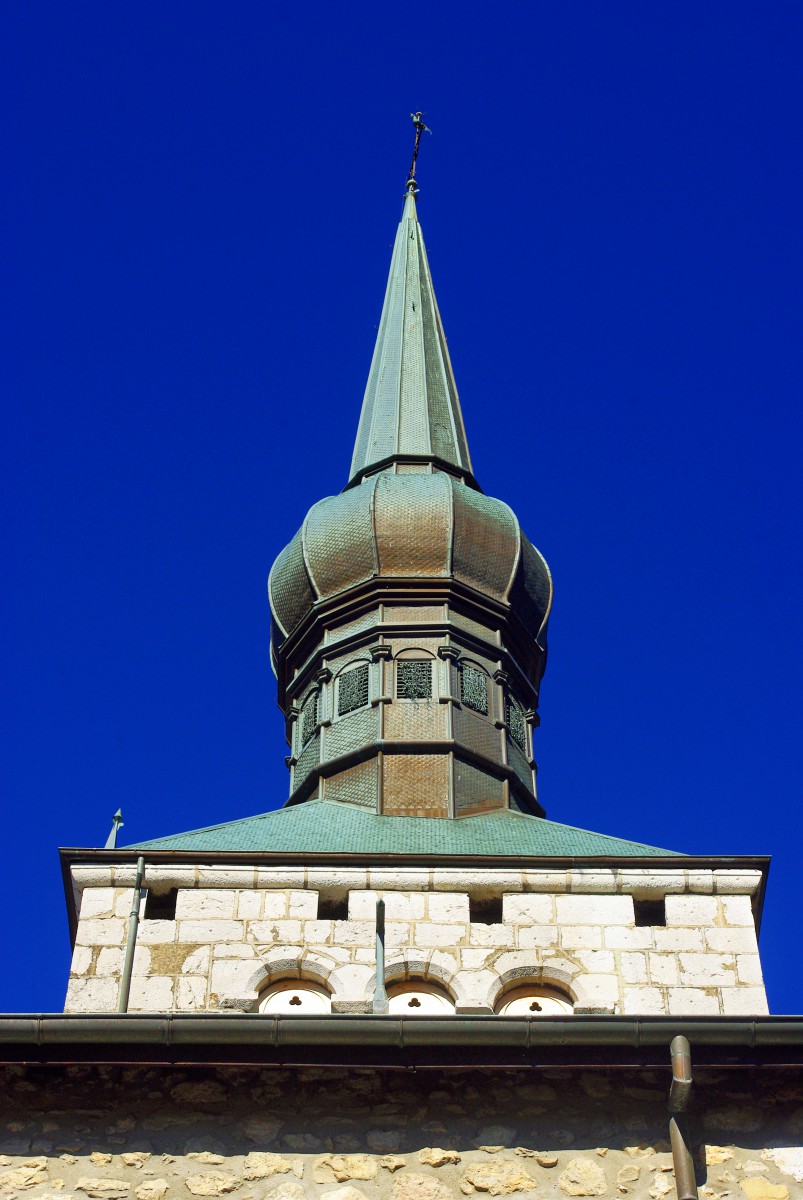 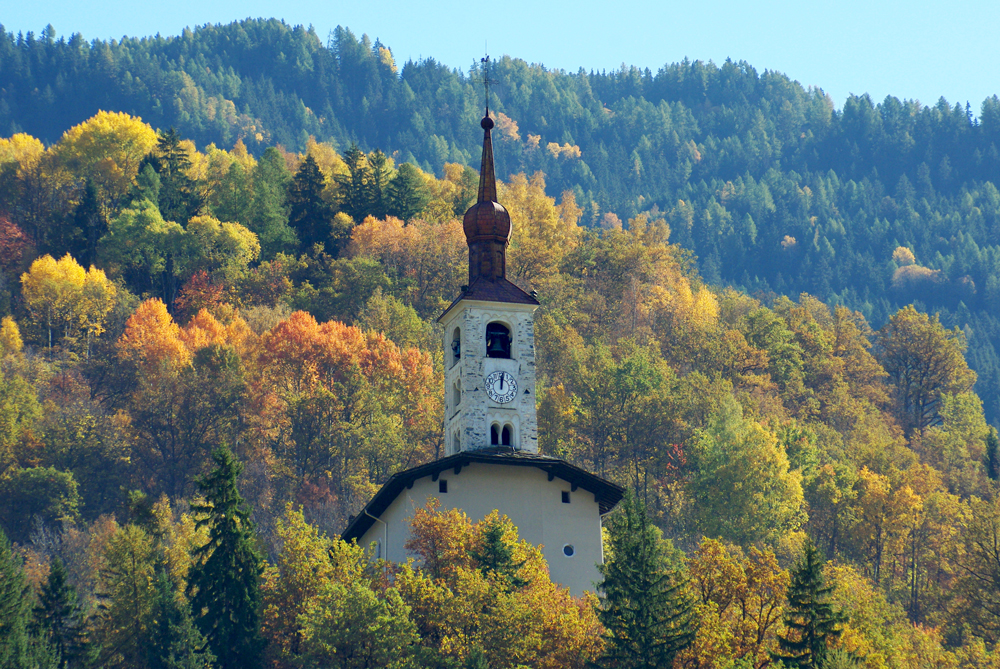 The church of Landry © French Moments 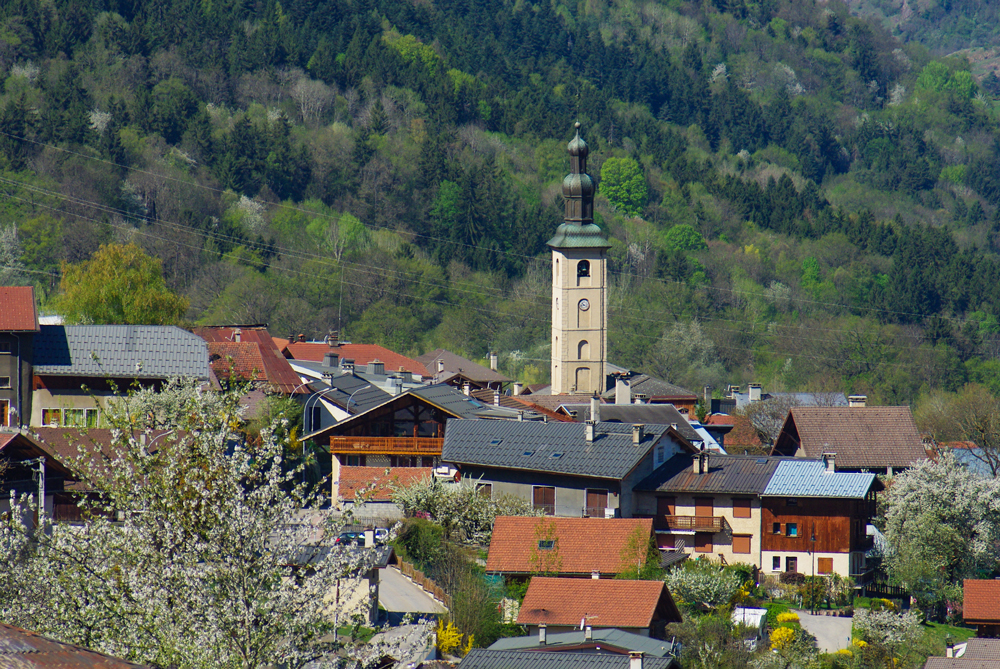 The other bell towers of Savoie (which are not bulbous!)

Of course, you can imagine that there are not only churches with onion dome steeples in Savoy!

Before ending this article, I wanted to tell you about a much older style… which tops the austere churches of the high valleys of Tarentaise and Maurienne.

A certain number of churches have a bell tower finished by a stone steeple. The latter is sometimes surrounded by bell towers (or four pyramidions), as in Bonneval-sur-Arc and in the neighbouring Dauphiny. To know more about the onion dome steeples of Savoy

Do you know of other beautiful onion dome steeples of Savoy? Tell me all about it in the comments below 🙂