New posts
You are at:Home»Monuments of France»Discover the old Ivry windmill near Paris

Ivry-sur-Seine does not rank amongst my favourite destinations in the Paris region. I knew of a beautiful windmill over there but always preferred to wander in the streets of central Paris. But a few days ago, I decided this was time to explore the South of Paris along the tramway 3a, from Porte d’Ivry to Porte de Vanves. My first stop was dedicated to the old Ivry windmill and I was not disappointed!

The first written mention of the Ivry windmill dates back to 1680 in an act of adjudication. However many locals believe the mill is far more older. It may have been built in the Middle-Ages, maybe in the 12th or 13th centuries. In the 17th century, the mill belonged to the seigniory of Ivry and Saint-Frambourg. It was mentioned in 1765 on a map of the royal hunts. It ceased to produce flour around 1830. By the 20th century, the old Ivry windmill had lost its wings and was in a state of abandon. In the 1970s it was threatened by a housing development and was meant to be demolished for good.

The restoration of the Ivry windmill

In 1975 the Ivry windmill was saved by the municipality and an association. To make space for the construction site (some ugly blocks of buildings), the monument was moved on the 6th May 1976 with the aid of hydraulic cylinders 35 metres away. 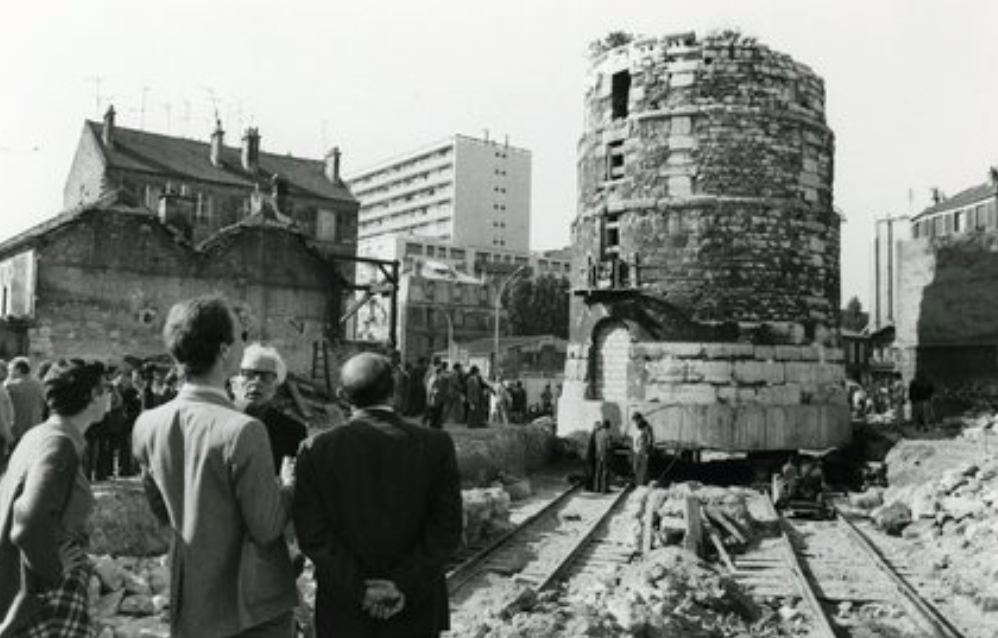 The Ivry Windmill being moved in 1975

The municipality of Ivry-sur-Seine decided to restore it entirely from the wings to the roof. The inside was converted as to receive visits.

Today the Ivry windmill is the only windmill left standing in the whole département of Val-de-Marne. The structure was listed as a historic monument in 1979.

The wings of the Ivry windmill © French Moments

The windmill is open to the public during guided tours on the third Saturday of the month from 3-6pm. Contact the town-hall of Ivry-sur-Seine for more info (01 49 60 24 26).

Here is a youtube video that explains the origins of the Ivry windmill [in French]:

The entrance to the Ivry windmill © French Moments

To access the Ivry windmill, get off at the métro station Porte d’Ivry (line7). The tramway 3a also calls at Porte d’Ivry.

Walk along the Avenue de la Porte d’Ivry which later spans the Périphérique. Now on the territory of Ivry-sur-Seine, continue straight ahead a few meters and turn right: here it is!

Find out more about the exact location of the Ivry windmill on google map.

The entrance to the Ivry windmill © French Moments

Other windmills of Paris

A little while ago, I wrote a post on the windmills of Montmartre in the 18th arrondissement. There are other windmills to discover in the Paris region such as:

Do you know other windmills in the Paris region? Share with us their locations in the comment box below! 🙂