The beauties of nature, the magnificence of the sun, the intoxication of the ever-changing sea… this was how Menton was described by English doctor James Henry Bennett, considered by the locals as the creator of the seaside resort. One of the prettiest towns on the French Mediterranean shores, sunny Menton, French Riviera is rightly nicknamed the “Pearl of France“. Set on the French-Italian border between the Italian Riviera and Monaco, Italianate Menton is the gateway to the glamorous French Riviera.

The town of Menton, French Riviera

Menton is situated on the French Riviera along the Franco-Italian border, 30 kms from Nice and 170 kms from Genoa (Italy). The commune of Menton has a population of approximately 30,000 (75,000 with the suburbs), and its people are either called Mentonnais and Mentonnaises, or more traditionally Mentonasques. Famous residents include Englishman William Webb Ellis (1806-1872) creator of rugby football, British Baptist preacher Charles H. Spurgeon (1834-1892) who died in Menton, Jean Cocteau (1889-1963) a French poet, novelist, dramatist, designer, playwright, artist and filmmaker, American singer Barbara Hendricks (Citizen of Honour, was married in Menton), French goalkeeper Jérôme Alonzo (b. 1972)… Menton enjoys an exceptional near-subtropical micro-climate with mild winters and hot summers due to the protection of the Alps. This climatic condition is favourable to the culture of citrus fruit, which explains why Menton used to be Europe’s biggest lemon producer until the 1930s.

Minimum temperatures in winter are usually no less than 8 degrees Celsius and a maximum of 28 in summer. 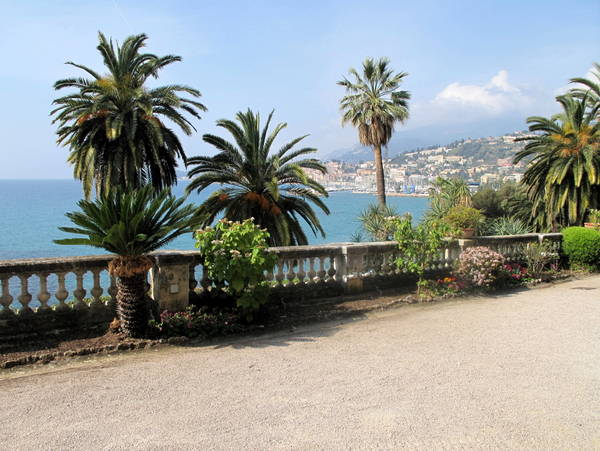 The town boasts many reputed parks and gardens from intimate parks to exuberant or botanical gardens.

Find out more about Menton’s Parks and Gardens.

The Lemon Tart of Menton

A classic lemon tart (tarte au citron) has a wonderful balance of lemons and a crispy sweet base. Tart enough to tingle on the tongue and delight your senses! Find out more about the recipe of the Lemon Tart.

It is believed that the site of Menton was already inhabited during the Paleolithic era. During the Roman times, the site of Menton was crossed by the Via Julia Augusta which run from Pisa, Italy to Arelates (Arles, France) through Menton’s neighbouring Italian town Album Intimilium (modern Ventimiglia) and La Turbie where a monument (Trophy of Augustus) was built to celebrate emperor Augustus’ victory over the Ligurian tribes. General view of the principality of Monaco

In 1346, the town was acquired by Charles Grimaldi of Monaco and stayed under the possession of the Grimaldis until 1848. That year, Menton and the neighbouring town of Roquebrune seceded from Monaco in response to a litigation involving taxes on lemon exports. The two towns self-proclaimed a ‘Free City’ and placed themselves under the protection of the King of Sardinia. Menton was then administrated by the House of Savoy until 1861 when the town voted massively for its annexation to France by referendum (833 for versus 54 against). Nice and its county had taken a similar decision a year before and Menton was added to the département of Alpes-Maritimes. In February 1861, Napoleon III paid to the prince of Monaco 4 million francs to compensate for the renouncement of the lord’s rights in perpetuity.

Menton had become French for a limited time during the French Revolution and the First Empire and was included in the newly created département des Alpes Maritimes. During a few years, the town was part of the Sanremo arrondissement, now in Italy. In the second half of the 19th century, Menton encountered a deep change following the publication of a treatise by James Henry Bennett: Winter and Spring on the Shores of the Mediterranean (1861) praising the mild climate of the town to tuberculosis sufferers. The English doctor had contracted the infectious disease and found himself completely healed after a stay in Menton in 1859. It was believed that his health had greatly improved thanks to winters in mild weather at the French Riviera. By his writings, the doctor contributed to popularise Menton and its surroundings as a upper-class winter holiday destination. English and Russian aristocrats built there luxurious hotels, villas, and palaces which are now part of the townscape of Menton which would be transformed into hospitals during the First World War to welcome injured soldiers. In 1882, there were 5,000 British residents living in Menton. From the annexation to France until the outbreak of the First World War, Menton continued its urban development. The construction of the harbour was completed in 1878 and new communication links made the town easier to reach: the Lower Corniche Road (1881) and the railway link between Monaco and Menton which opened in 1869. Menton was reached from Paris in 24 hours by train.

From summer 1940 to 8 September 1943, Menton was annexed by Italy and then until 6 September 1944 by the Germans. The town was liberated by the American and Canadian armies of the First Special Service Force on 8 September 1944. Since the 1950s, Menton has been twinned with many prestigious towns in Europe: Baden-Baden (Germany), Montreux (Switzerland), Namur (Belgium), Nauplie (Greece), Noordwijk (The Netherlands), Sochi (Russia), and Valencia (Spain).

In 1964 a memorable scene of French blockbuster “Le Corniaud” (‘the Sucker’) starring Louis de Funès and Bourvil was filmed at the border checkpoint of Menton. In 1983, James Bond movie “Never Say Never Again” with Sean Connery was set in the old town.

It is important to note that throughout its history, Menton has never been part of the historic County of Nice.

“Old Menton with its steep tiers of houses huddled one on top of the other, its mysterious myriad of rippling patches of light and dark, its sudden flashes of sun and of blue church towers, all projected against the velvet opalescence of the mountains.”

The campanile of St. Michel Church proudly soars above the steep narrow lanes and pastel-shaded façades of the historic old town, squeezed between two bays. From the seafront, a succession of majestic flight of steps leads up to the cobbled parvis of the church.

The Saint-Michel-Archange basilica was built between 1639 and 1653 by prince Honoré II of Monaco in Baroque architecture. The church was consecrated by Mauro Promontorio, bishop of Vintimiglia, on 8 May 1675 in the presence of prince Louis I of Monaco.

The iconic 53 metre tall bell tower was added in 1701 by architect Emmanuel Cantone making it the tallest structure in town. The yellow and pale green façade was completed in 1819 in Baroque style typical of the 17th century with added columns topped with ionic and corinthian capitals. The inside of the church is laid out as a Latin cross and was inspired by the Annunziata Basilica in Genoa. The decoration is unsurprisingly sumptuous and the side chapels contain the tombs of local and Monaco notables. It is estimated that the church welcomes more than 100,000 visitors each year.

Chapel of the Conception

Next to the basilica stands another Baroque church: the Chapel of the Immaculée-Conception (or Chapelle des Pénitents Blancs), built from 1680 to 1687 and greatly restored in the 19th century. Its façade displays several Baroque decorations: pinacles, friezes, and garlands of stucco flowers. The pediment is surmounted by the three theological virtues. A general view of the historic part of Menton from the sea front gives the appearance of a perched village.

The narrow streets of the old town are bordered with the ochre façades of tall houses and are often dark, winding and vaulted. They are linked by covered passages (such as Traverse Saint-Miche) or reach cool little squares.

Menton has been labelled by the ministry of culture as a ‘Ville d’art et d’histoire’.

The seafront of Menton, French Riviera

The palm-lined seafront of Menton features some beautiful green spaces, museums, as well as free pebble beaches, private sandy beaches and two marinas. Longing the seafront, Quai Napoleon was built on 16 giant arches and marks the limit of the old town.

The Bastion of Menton The fort was built by the princes of Monaco in 1636 to protect Menton’s harbour. Jean Cocteau (1889-1963) a multitalented French poet, novelist, dramatist, designer, playwright, artist and filmmaker, had this monument restored in order to house a permanent exhibition for his work: drawings, tapestries, watercolours, pastels and ceramics.

Opened in 2011, the Jean Cocteau Museum is situated between the beach and the covered market. The museum displays drawings, tapestries and mosaics by Jean Cocteau. The museum’s collection of some 1,500 artefacts was donated by Séverin Wunderman to the municipality of Menton.

Menton is famous in France for its Lemon Festival which takes place every February.

The Menton Chamber Music Festival is run every year on the parvis of St. Michel Basilica.

How to get to Menton, French Riviera

Thanks to its proximity with Nice, it is easy to reach Menton either by air, train or car.

Nice airport (France’s 3rd after Paris-CDG and Paris-Orly) has flights from London and many British cities (Birmingham, Liverpool, Leeds, Edinburgh).

A bus connects the airport to Nice railway station where half-hourly trains to Menton only take 30 minutes.

The railway station of Menton is located within 5 minutes walking distance from the seafront.

Menton is situated on the A8 motorway which links Aix-en-Provence to the Italian border and Genoa via the A10.

The distance between Paris and Menton is of 960 km and the journey takes approximately 9 hrs via the Autoroute du Soleil (A6, A7 and A8).