What you need to know about the Lorraine Region

What you need to know about the Lorraine Region

Lorraine is famous worldwide for its quiche, macarons, Mirabelle plum and madeleine. It is home to more than 2,3 million inhabitants (Lorrains and Lorraines). For many years, the region was synonymous with coal, iron and steel industries and was in the 1960 the 3rd economical region in France. Today, Lorraine shows a different face, thanks to its two leading and attractive cities of Nancy and Metz. The picturesque landscape of the Lorraine region is also ideal for those seeking peace and quiet, at only 1.30 hours from Paris.

A brief description of the Lorraine region

The region meets Champagne-Ardenne to the West and Alsace to the East.

To the North, three European countries mark the border: Belgium, Luxembourg and Germany.

On the 1st January 2016, Lorraine, Alsace and Champagne-Ardennes merged into a new region called Grand-Est. 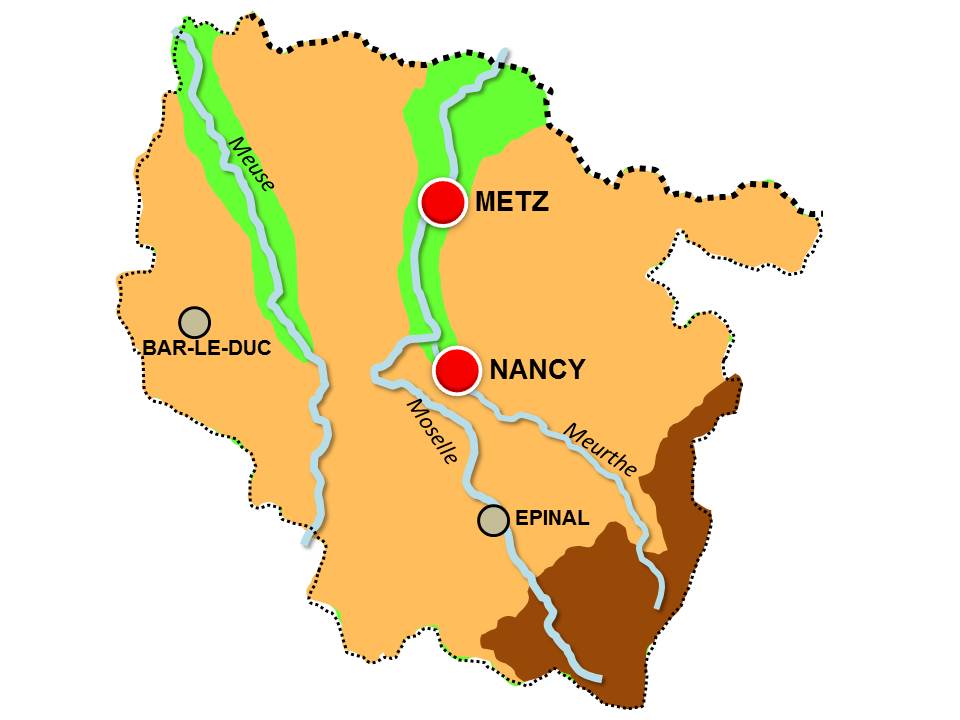 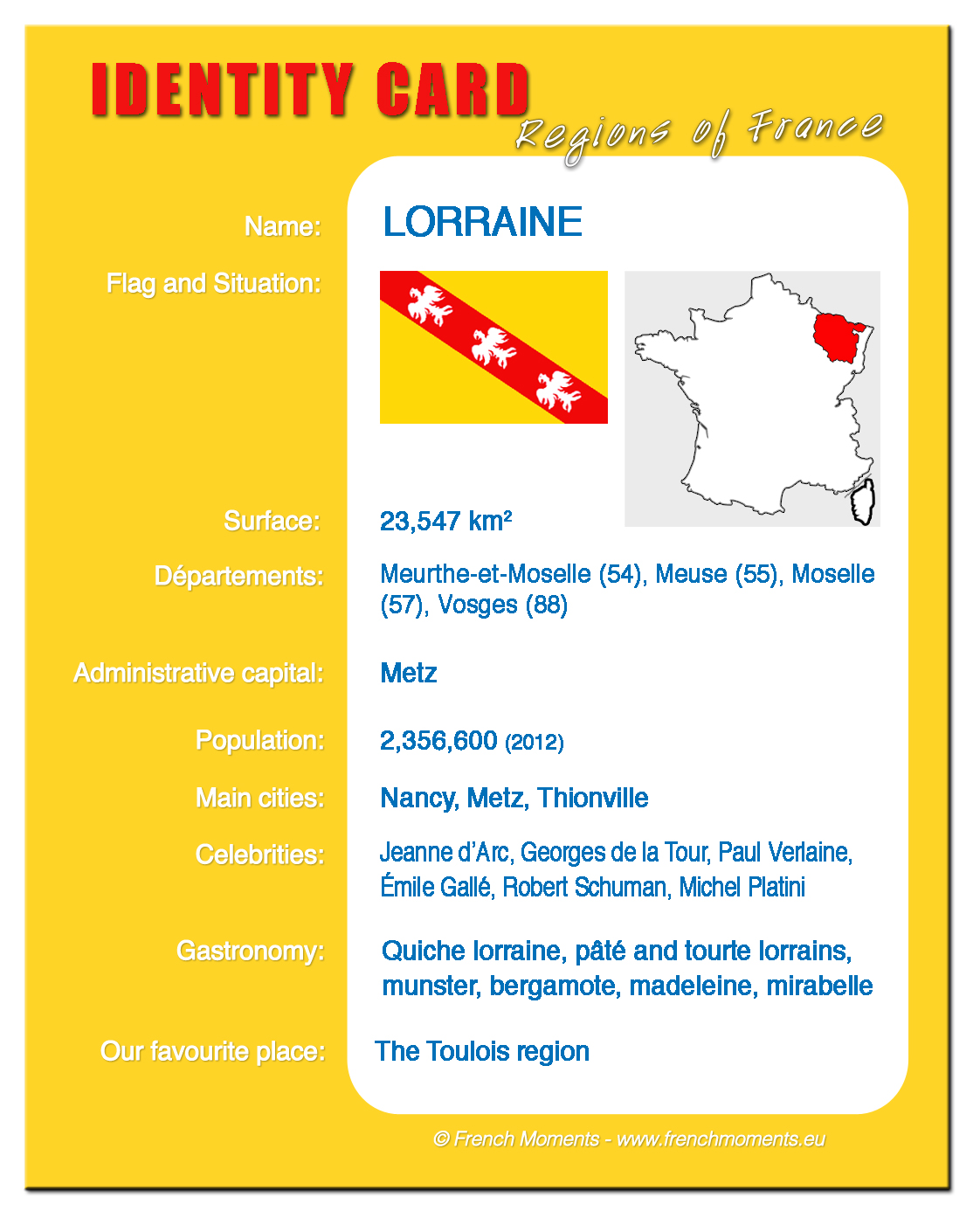 The city of Nancy

Nancy, capital of the Dukes of Lorraine is famous throughout Europe for its UNESCO World Heritage squares, dating from the 18th Century.

Over the last 30 years, the city underwent a complete refurbishment of its old town, making the Lorraine capital an even more pleasant place to stay. Beautiful squares and buildings reveal a rich historical past, when the independent Duchy of Lorraine was coveted by the Kings of France and Austrian Habsburg. The School of Nancy played a major role in the development of Art Nouveau in Europe.

The city of Metz

Metz is the chief town of the Lorraine region. The charming provincial city is located on the east side of the Moselle River, between Nancy and Luxembourg. Close to three international borders (Germany, Luxemburg and Belgium), Greater Metz has a population of 230,000, and is accessible from Paris by TGV within 1.20 hours.

Metz is famous for its lofty gothic Cathedral Saint Etienne and its German Imperial District around the railway station. It takes pride in being a true Garden City, with its trees, flowerbeds and green esplanades. Today, no visitors in the peaceful city would believe how turbulent Metz’ history has been over the centuries, being continually annexed by France and Germany. After the first visit to this seductive town most people go back again.

Historic and Cultural Heritage in the Lorraine region

You will find a wide range of cathedrals, churches, castles and monuments in the Lorraine region.

The Cathedral city of Verdun by the River Meuse:

The Cathedral city of Toul by the River Moselle:

The château of Haroué, south of Nancy:

The château of Lunéville:

Overlooking the Plain of Woëvre, the village and castle of Hattonchâtel:

The Natural Regional Park of Lorraine

The area is ideal for rest and relaxation with sports and water activities, horse trails, hiking, nature tours, shows and much more.

The Natural Regional Park of Lorraine includes two non-adjoining parts on each side of the Moselle River.

On the west side, it encircles some hillside villages, where the wine growers used to live, large forests of broad-leafed trees and borders the WWI battlefield of Verdun.

As for the eastern side, it is located around the Saulnois region and the “Pays des Etangs” (land of ponds).

To the east of the region, the Vosges Mountains are synonymous with softness thanks to the rounded shape of their peaks, the “ballons” (rounded summits). This mountainous mass still offers a variety of landscapes, including glacial lakes, wet and high altitude meadows, deep valleys, forests, waterfalls, cliffs and rocks.

The Vosges Mountain range marks the border between Lorraine and Alsace to the east. The crest line was a real linguistic and cultural barrier between the two regions. As such, the term “Alsace-Lorraine” refers not to a homogenous region, but rather the contrary. Therefore, it was used to describe the geographic entity corresponding to the annexation of Alsace and of the Lorraine département of Moselle by Prussia.

The Gastronomy of the Lorraine region

And finally, here’s a few ideas of local produce to enjoy in the Lorraine region:

Without forgetting the world-famous Quiche Lorraine!

Where to stay in Lorraine?

For your stay in the Lorraine countryside, why not booking through Nature.house?

Nature.house is a Dutch booking platform, which was founded in 2009 by Tim and Luuk van Oerle, two brothers who are passionate about bird watching. Since then, the company’s mission has been to connect people with nature.

The website offers over 15,000 nature houses all over Europe, such as cottages, villas, tiny houses, treehouses, yurts, and many more. Also, they have planted over one million trees in Madagascar, Tanzania, and Burkina Faso, and now, they make a significant impact on the environment by investing € 1 for every booking in local nature projects.

For more info about Lorraine