The village of Kintzheim (département of Bas-Rhin) is a popular landmark on the Alsace Wine Route between Ribeauvillé and Sélestat. The village is home to the popular attractions of La Volerie des Aigles, La Montagne des Singes and a stork park. In addition, the village is located close by the iconic Haut-Kœnigsbourg Castle.

Kintzheim: a bit of History 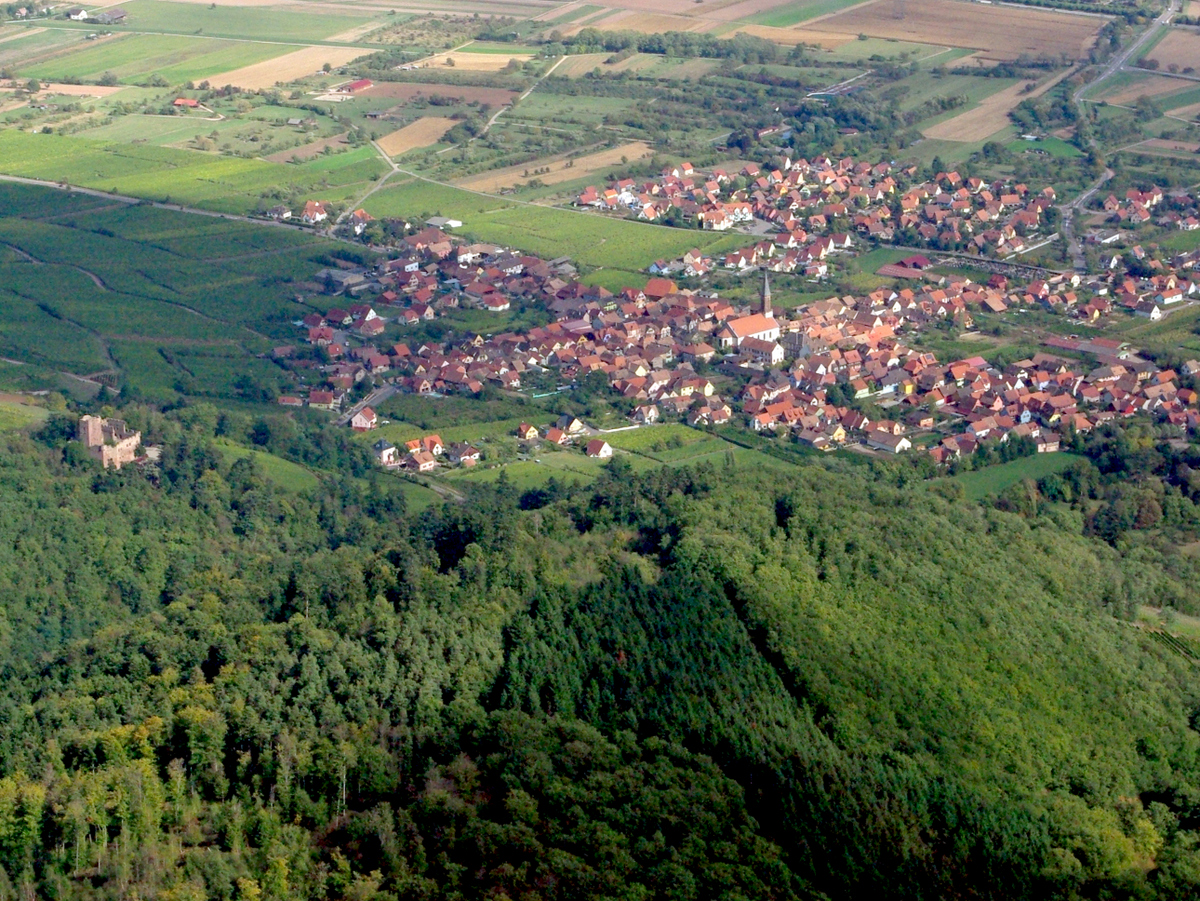 The village from above © French Moments

Kintzheim is situated on the foothills of the Vosges and is surrounded by the vineyards of Alsace. The site was occupied by the Gallo-Romans. Kintzheim was first mentioned in 774 (Charter of Charlemagne) under the name ‘Quningishaim’. It seems that Emperor Charlemagne had a palace built on the foothills of the Vosges overlooking the plain. In the Middle-Ages the village came into possession of the Hohenstaufens. The castle of Kintzheim, built in the 12th century, was owned by the Rathsamhausens. It was ceded to the city of Sélestat in 1492. As for the village, it was owned by Sélestat from the 16th century to 1834. The centre of the village features many fine half-timbered houses. The village is organised along the main street: rue de la Liberté. Perpendicular to the rue de la Liberté is rue du Général de Gaulle which leads to the castle and the Montagne des Singes. 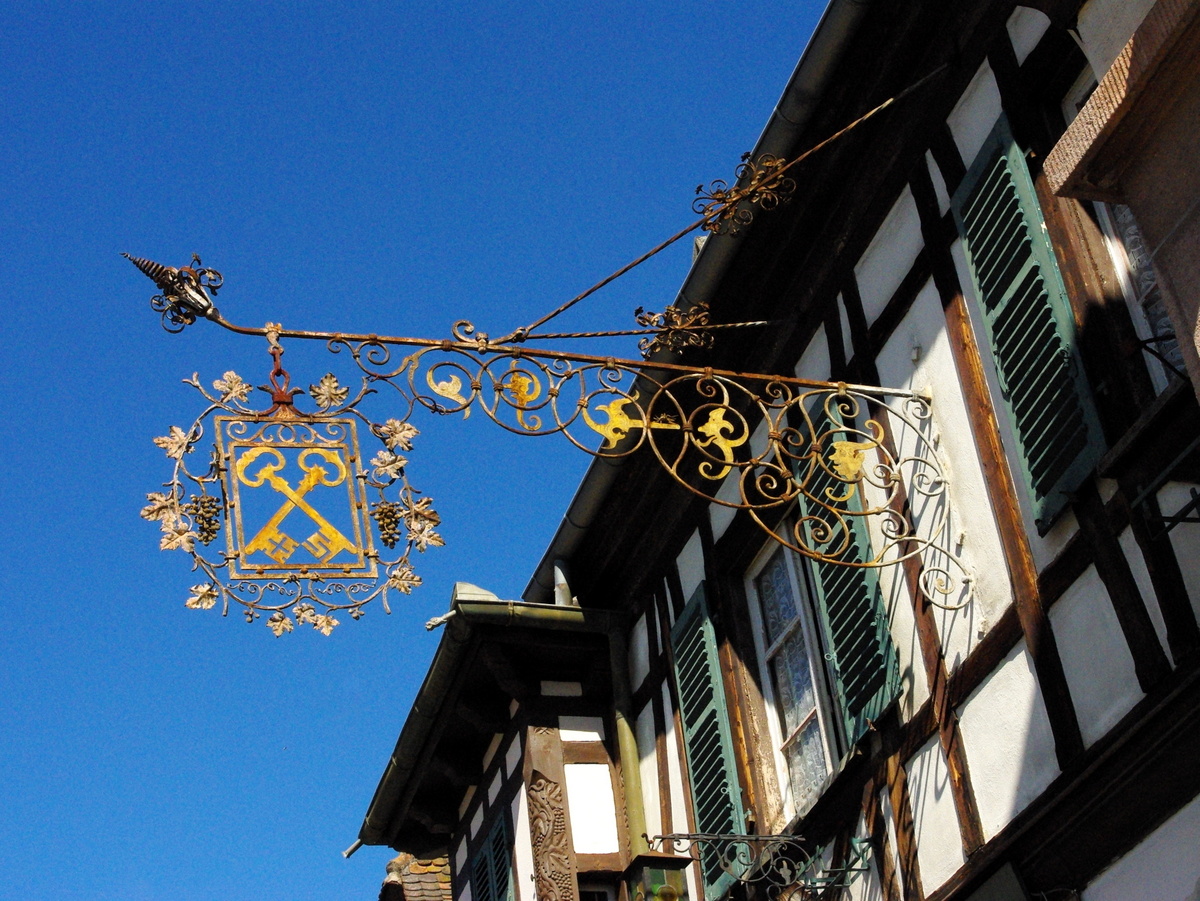 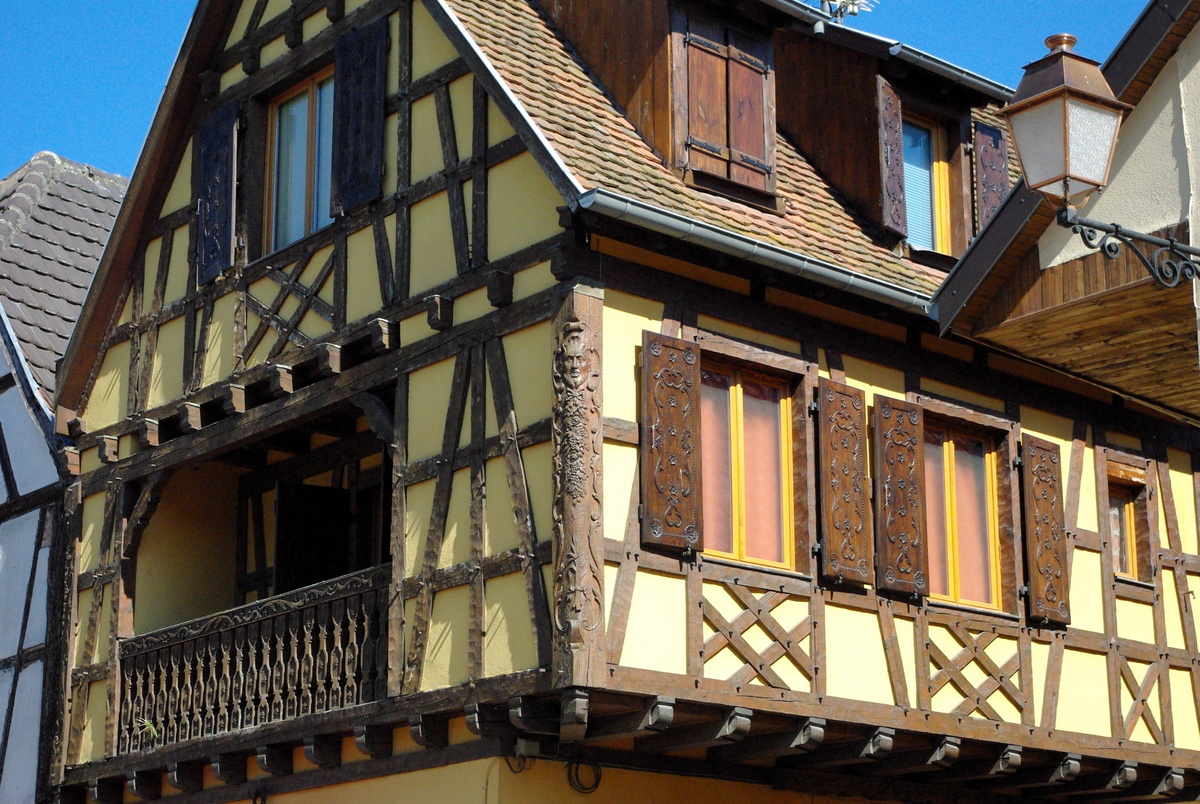 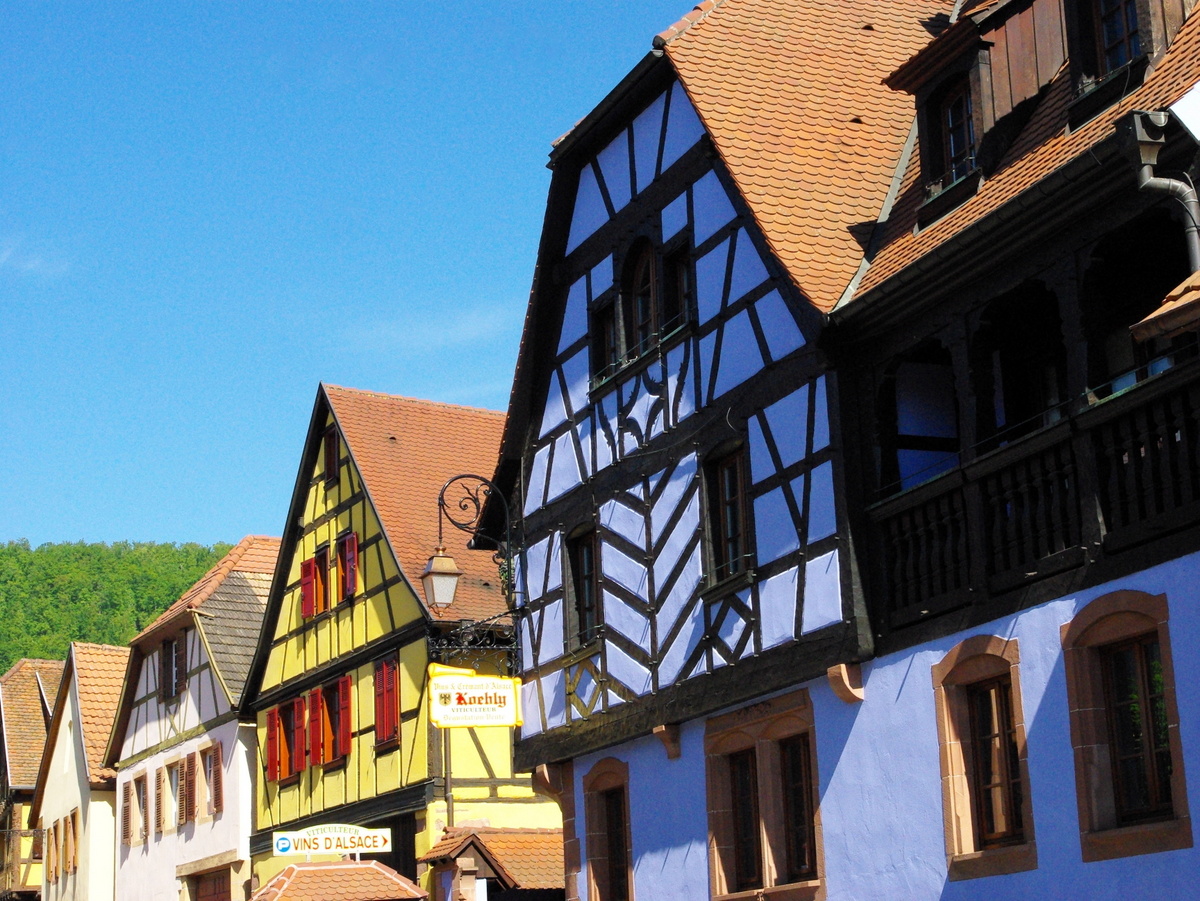 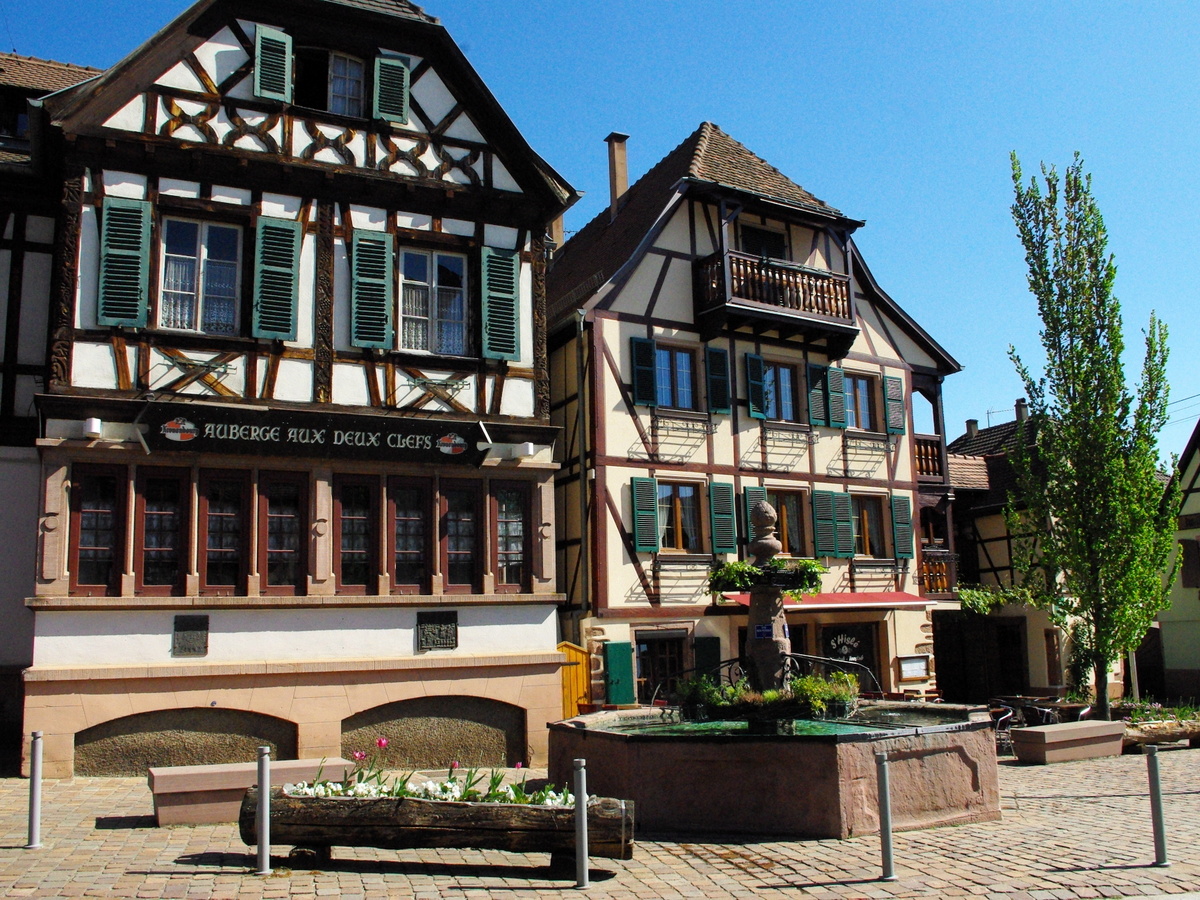 The Castle of Kinztheim and the Eagles’ Nest 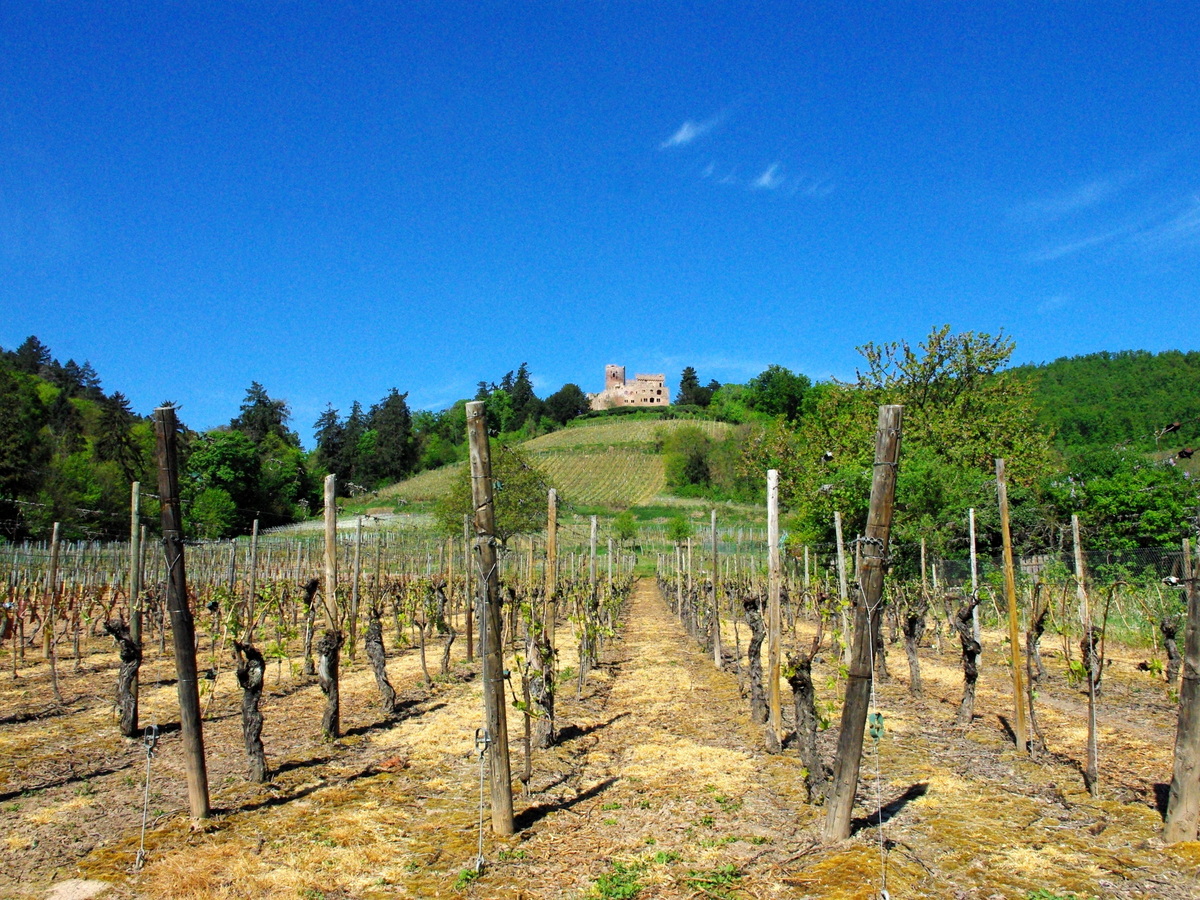 The Castle above the vineyards © French Moments

The castle of Kinztheim overlooks the village, its vineyards and the plain of Alsace. The fortress now in ruins dates back to around 1250 when it was ordered by Emperor Frederick II of Hohenstaufen. The keep and the walls were completed by the end of the 13th century and it became a residential place in the 14th century. During the Thirty Years’ War, the castle was partly dismantled by the Swedes and partly rebuilt in the 17th century. From the French Revolution to the mid-19th century the fortress was abandoned and was greatly damaged. Works of consolidation were undergone in 1876 by German architects. The courtyard of the castle is now used to host the bird show “La Volerie des Aigles” (The Eagles’ Nest) conducted in French. More than 80 birds of prey are trained for spectacular shows open to the public which lasts for 40 minutes. Several species of birds of prey are featured: eagles and vultures, kites, falcons and even a condor, interacting in complete freedom with their handlers – and sometimes with the crowd.

Two kilometres outside the village in the Vosges, “La Montagne des Singes” (Monkeys’ Mount) is an enclosed woodland park of 60 acres where 200 Barbary apes live in total liberty with neither cages nor bars to hinder your view. Well adapted to the Alsatian climate, the macaques do not hesitate to take the special popcorn given at the entrance out of your hand.

Between Kintzheim and Sélestat, the small leisure centre “Cigoland” is devoted to the iconic white stork, one of the emblems of Alsace. It has evolved into a mini theme-park with rides and attractions. It also houses 25 different animal species such as emus, wallabies, swans, and lamas. The centre is popular among families with children.