Several cities and villages along the Alsace Wine Route have since become famous and attract a very large crowd of visitors during the summer months and Christmas. These gems of the wine country are often made up of old medieval ramparts, winding alleyways that bloom with magnificent geraniums, winstubs, vaults, half-timbered houses, and medieval churches. Many town names have become synonymous with rich traditions, friendliness, prosperity and great wines. One of them has become over the years a favourite destination: Kaysersberg.

An introduction to Kaysersberg, the “Mountain of the Emperor”

“The location of Kaysersberg, its curious silhouette, its numerous constructions of the past make it one of the prettiest cities among the cities of the Alsatian vineyard”

Kaysersberg, the “Mountain of the Emperor”, certainly deserves its prestigious name. A tourist hotspot, the little city houses some of the most beautiful half-timbered houses of the Renaissance in Alsace in its entirely pedestrian centre. This remarkable heritage goes hand in hand with famous historical personalities who have marked the region and beyond: Geiler de Kaysersberg (humanist preacher at the Strasbourg Cathedral), Matthieu Zell (the first reformer of Strasbourg, and Albert Schweitzer (Nobel Peace Prize winner in 1952).

The city of Kaysersberg and its viticulture are dominated by the castle ruins, which only consists now of a beautiful round tower. The view from its summit offers a panorama of the city, the valley of the Weiss, the vineyards and the Plain of Alsace, and beyond, the Black Forest in Germany. On the 1st January 2016, Kaysersberg officially merged with the neighbouring villages of Kientzheim and Sigolsheim to form a new commune named: Kaysersberg-Vignoble.

In 2017 the little town was chosen as the favourite village of the French people on France 2’s TV programme “Le Village Préféré des Français” presented by Stéphane Bern. 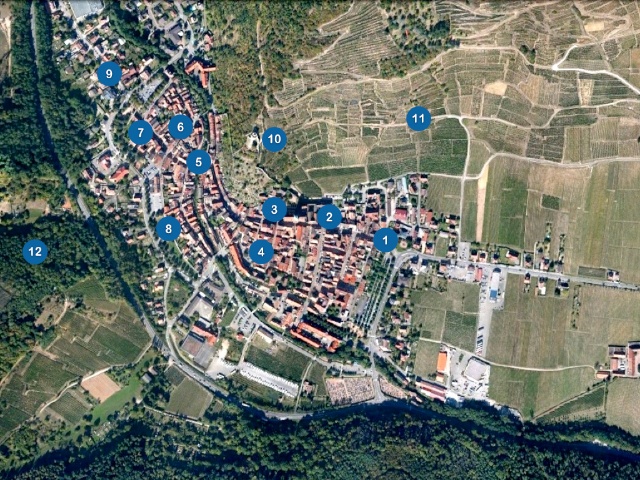 Its geographic location on the strategic route linking Colmar to Nancy by the Col du Bonhomme helped Kaysersberg to make a name for itself in local history. Already in the 13th century, King Henry VII of Hohenstaufen, Lord of Kaysersberg, decided to expand and consolidate the imperial fortress to block entry to the valley and to control passage there. The city of Kaysersberg naturally developed at the foot of the castle, and in 1293 King Adolf of Germany, count of Nassau granted the population the same rights and exemptions as in Colmar, making the small town an imperial city.

In 1354, Emperor Charles IV recognised the alliance of 10 free Alsatian cities at the heart of the Holy Roman Empire in one league: the Décapole. The union included Kaysersberg and nine other Alsatian cities: Haguenau, Colmar, Wissembourg, Turckheim, Obernai, Rosheim, Munster, Sélestat, Mulhouse (replaced by Landau from 1515) and Seltz (from 1358 to 1414). The Decapole was defined by a military alliance and, something particularly rare at the time, a financial aid in case of bankruptcy. After Alsace was joined to France, Louis XIV ordered its dissolution in 1674.

In 1525, the Peasants Revolt did not spare the city which was besieged by imperial troops who had come to re-establish order. The Thirty Years War was disastrous for the city’s economy, as it was for the rest of Alsace. At the end of the war, Kaysersberg even had to hypothecate its bells to Basel!

In 1573, Emperor Maximilian assigned Lazare of Schwendi as imperial bailiff. This valiant soldier had fought in Hungary and besieged the city of Tokaj. It is assumed that while there he gathered some plants from the Tokay vine, a famous grape variety, which was given as a gift to the city of Kaysersberg. From 2007, the name “Tokay of Alsace” is represented under the name of “ Pinot Gris”.

At the French Revolution, the city temporarily changed its name to be known as “Mont-Libre”, in order to appear more in harmony with the ideas of the 1st Republic.

The old town of Kaysersberg

When visiting this charming little city, it is essential to visit the towers of the medieval rampart. Of the medieval ramparts’ 6 towers, five are still standing today. They include the surrounding tower known as “Kesslertum” (1407), the Tower of the Upper Gate (15th century), the Porte des Pucelles (Maidens Gate) (15th century), the Hospital Tower and the Junker Haus Tower (known as the Tower of Thieves). A peaceful and shady walk is organised along the outside of the walls.

The little city’s main road is lined with many half-timbered corbelled homes, most of which date from the 15th and 16th centuries.

The famous Fortified Bridge (1514) replaced an old wooden structure. Unique in Alsace, it spans the small river of the Weiss which separates the old city and the upper part of town. It is equipped, on both sides, with parapets and arrowslits, in order to prevent any action that may occur along the Weiss River. In the middle of the bridge, is an aedicule surmounted by the coat of arms of the German Holy Roman Empire and of those of the city (which had an emblem of a pouch) which houses an 18th century polychrome statue of the Virgin. Residents who had committed minor crimes were locked up here, and who, for a short time became the laughingstock of the town.

The Faller Brief House is the first building of the upper part of town to the right. It is a very picturesque house which includes an almost-square main part and a fairly deep off-centre forepart, with a small bay window and a gallery. The sculpted and coiled posts indicate that it was constructed in 1594. The back courtyard, accessible from Rue des Potiers, has a carter door dating from 1593 with a shield with a cooper emblem. This house was built for the cooper Paul Offinger who asked for permission to build a bay window in 1594. His initials B (for Paul!) and O (for Offinger) as well as the emblem of the cooper and the years 1593 and 1594 are featured, either together or separately, in various parts of the building.

On the other side of the fortified Bridge, in the old city, is the Badhus, previously known as the Bridge Hotel. It dates back to 1600 and originally served as a hotel. In 1872, the city installed a village hall on the first floor, public bathrooms and a wash-house on the ground floor.

The Town Hall, built in stone in 1521 in Rhineland Renaissance style presents, in its façade, a prettily worked bay window over two storeys and, to the left, a stair turret. Inside, the large Council hall is covered by a coffered ceiling and wooden panels. The doors, with ribbed columns and Doric and Ionic heads, are surmounted by a work of marquetry representing the symbol of justice.

A remarkable Renaissance well, decorated with dolphins, can be found in the small passage situated to the right and leading to the inner courtyard. The inner courtyard is a place of tranquillity, and one of its walls is decorated with a fresco from 1993 evoking the Middle Ages. It was painted by Mattauch on the occasion of the 700th anniversary of Kaysersberg.

The Loecken House, from the 16th century, with its half-timbered walls, houses a famous patisserie which specialises in Alsatian gastronomic products such as foie gras, eau de vie (cognac) and homemade jams.

Kaysersberg: the Church of the Holy Cross

The parish church of Kaysersberg is dedicated to the Holy Cross. Tradition has it that Empress Helenadiscovered the real cross in 327 in Jerusalem. The (modern) statue of the saint is placed in a niche in the pediment of the church and the statue of Emperor Constantine, her son, on the beautiful fountain in front of the sanctuary.

Its construction was spread out between 1230 and the 16th century. The west portal, from the 13th century, is of Romanesque style with its arches and semicircular rows of columns with palms and mermaids.

The nave is surprising with its obscurity due to the heaviness of its shapes (notably the huge pillars). As for the collaterals of the 15th and 16th centuries, they are of gothic style, with beautiful archways whose clefs are decorated with shields.

A monumental Calvary of the 15th century, previously unpopular because of its disproportionate size, dominates the nave.

A remarkable wooden altarpiece sculpted by Jean Bongartz (or Bongart) from Colmar (1518) hangs in the chancel. Its fourteen panels retrace the Passion of the Christ and is crowned by Saint Christopher, Empress Helena and Saint Margaret.

The unique bell tower, pointed at the origin, was reworked in 1825 to allow the Kaysersberg residents to have a chime of 5 bells.

The Albert Schweitzer museum is dedicated to the 1952 Nobel Peace Prize winner. The house was formerly a protestant church in which Albert Schweitzer was born in 1875. Schweitzer, an Alsatian theologian, organist, philosopher, physician, and medical missionary, was born at the time when Kaysersberg was annexed by Germany. He is known in France for having founded and sustained the Albert Schweitzer Hospital in Lambaréné, now in Gabon.

The ruins of the 13th century castle overlook the city from 50 metres high. The remarkable circular keep has walls that are 4.42 metres thick. The castle had a military role, watching over the road linking Nancy to Colmar. It was ruined in 1632 by mercenaries of the Swedish army during the Thirty Years War.

The Christmas market of Kaysersberg

Christmas markets (Christkindelmarik) are a real institution and are deeply rooted in Alsatian tradition. When the time of Advent starts in Alsace, cities and villages are decorated for the occasion. The streets are adorned with sparkling decorations, animated facades, and illuminated monuments. Pretty little wooden chalets are erected in the centre of towns and are individually decorated and illuminated to spread the enchanting atmosphere of the Alsatian villages. The great Christmas markets begin at Advent and finish shortly before Christmas.

Lourmarin in Provence: What To See and Do

Bonnieux in Provence: What To See and Do