Among the many parks and gardens of Paris, the Jardin du Luxembourg (Luxembourg Gardens) is certainly one of my favourites. It is also a much appreciate green space for Parisians, students and tourists. It’s easy to fall in love with the gardens. They are a fascinating place, an “oxygen bottle” in the centre of the French capital. There, visitors enjoy the greenery punctuated with a multitude of statues, flowerbeds, tree-lined promenades, playgrounds and the famous Guignol puppet show. Come along, I’ll show you the place…

Where is the Jardin du Luxembourg?

The Jardin du Luxembourg is part of the 6th arrondissement. The park owes its popularity to its magnificent trees, particularly the grand horse chestnut trees and the paulownias. A little orangery hosts rose-bays, palm trees, camphor trees and also pomegranate trees.

At the centre of the garden, Le Nôtre designed an open space. The formal garden is organised around an octagonal basin. It borders the South façade of the Luxembourg Palace and create a perspective to the Paris Observatory. 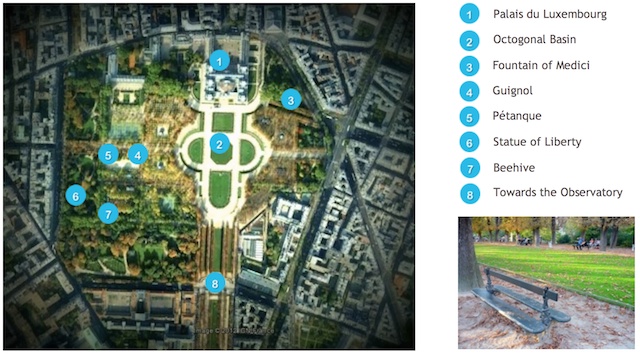 The formal gardens cover most of the Jardin du Luxembourg (French for Garden of Luxembourg). Traditionally it is a gathering site of Parisian high society. It also offers a resting space in the English garden located along the rue Guynemer and rue Auguste-Comte. This is where you’ll find orchids and vines.

History of the Luxembourg Gardens

The Luxembourg Gardens were created in 1617. It owes its name to the Duke of Piney-Luxembourg, first landlord of the domain.

The Mark of Maria de’ Medici

The Italian born Queen wished to create a building to remind her of the Pitti Palace as well as establishing gardens evoking those of Boboli in Florence.

The new edifice opened onto a 8 hectare park. More than 2,000 elm trees were planted and large flower beds were laid out. The recently built Arcueil aqueduct fed the fountains with fresh water.

One of the most beautiful settings in the gardens is the Medici fountain.

It can easily be missed if you don’t walk to the east side of the palace.

It’s probably the most famous fountain of the park. It dates back to the 1630s when Maria de’ Medici Florentine commissioned its construction from engineer Thomas Francine.

Initially named “Luxembourg Grotto”, it features an Italian-style portico to which the garden architects added a fountain and a lengthened basin.

However the fountain you now see has been altered several times since the 17th century. In 1863, Auguste Ottin decorated it with a group of three mythological characters:

In the central niche, you’ll discover the story of Polyphemus in love with Galateais.

Crouched down, the cyclops is about to crush the young and beautiful goddess of the sea in the arms of Acis.

In 1862, the gardens’ neighbourhood underwent a massive restructuration in the line with the great urban works of Baron Haussmann. The construction of the new rue de Médicis led to great changes in the gardens.

Urban planners under the direction of Haussmann removed the fountain stone by stone and re-assembled it 30 metres closer to the palace. They also created a 50 m long basin bordered with plane trees and flower pots in stone.

That’s why the basin in front of the fountain shows a wonderful green setting. Its long shape gives the illusion of a water setting.

Also part of the urban restructuration, city-planners moved the Léda Fountain located on the corner of rue du Regard and rue de Vaugirard. It found its place against the rear of the Medici fountain’s portico.

The touches of Le Nôtre

The garden has been modified and extended several times.

Architect Le Nôtre constructed a big octagonal basin in the centre of the formal garden on which little boats drift.

From the garden designed for Maria de Medici, almost nothing remains today apart from the orangery and the Medicis Fountain of Florentine inspiration.

From 1810, the green area of the park was extended to the South by the gardens along the avenue de l’Observatoire.

A public park opened to the public since 1642!

In 1642, Gaston of Orléans opened the park to the public. He was the younger brother of Louis XIII, who inherited the space.

The first visitors were local bourgeois, clerics, intellectuals and nannies who had to rent chairs from a lady in front of the palace.

Today, the park is the favourite green spaces of students from the universities of the 5th arrondissement.

Before 1974 it cost to use the iconic chairs in the park. You had to pay a fee to women called “les chaisières” to sit on them. This is one of the many professions which disappeared more than 40 years ago…

The statues of the Luxembourg Gardens

While having a stroll in the Jardin du Luxembourg, you’ll be amazed at the multitude of statues scattered in the park.

Ouf of the 106 statues in the garden, most of them date back to the reign of Louis-Philippe (19th C.) who wished to add to the romantic character of the site.

The statues of the Queens of France

This is the case for the famous statues of the “Queens of France and famous women” (Reines de France et Femmes illustres).

King Louis Philippe (reign 1830-1848) launched the project in 1843 which gathered some of the greatest sculptors of the time.

It is a series of 20 sculptures in white marble set out on the right and left terraces around the great basin. Each statue measures between 2.30 and 3.80 metres in height and stands on a stone pedestal which indicates the name, its function, and the dates of birth and death of the person.

Here’s the list of the 20 queen and famous women:

… and their locations around the central basin:

But someone’s missing, don’t you think?

What about Joan of Arc?!

Interestingly the series originally included a statue of Joan of Arc by François Rude. As it was considered too fragile to remain outdoors, authorities had it moved to the Louvre in 1872. Instead the French government commissioned a new statue from Taluet: Margaret of Anjou, completed in 1877.

The Statue of Liberty

The most unusual statue in the park, placed there in 1906, is arguably that of the Statue of Liberty. The replica is a donation its sculptor, Frédéric Auguste Bartholdi.

In the far south-west of the garden, a beehive produces a few hundred kilos of honey per year. Originally established in 1856, the beehive was rebuilt in 1991.

Not far is an orchard containing more than 700 apple and pear trees as well as grape vines.

The bandstand dates back to 1879 (contemporary with the wooden merry-go-round). From time to time it continues to host concerts for brass bands.

Paintings of the Luxembourg Gardens 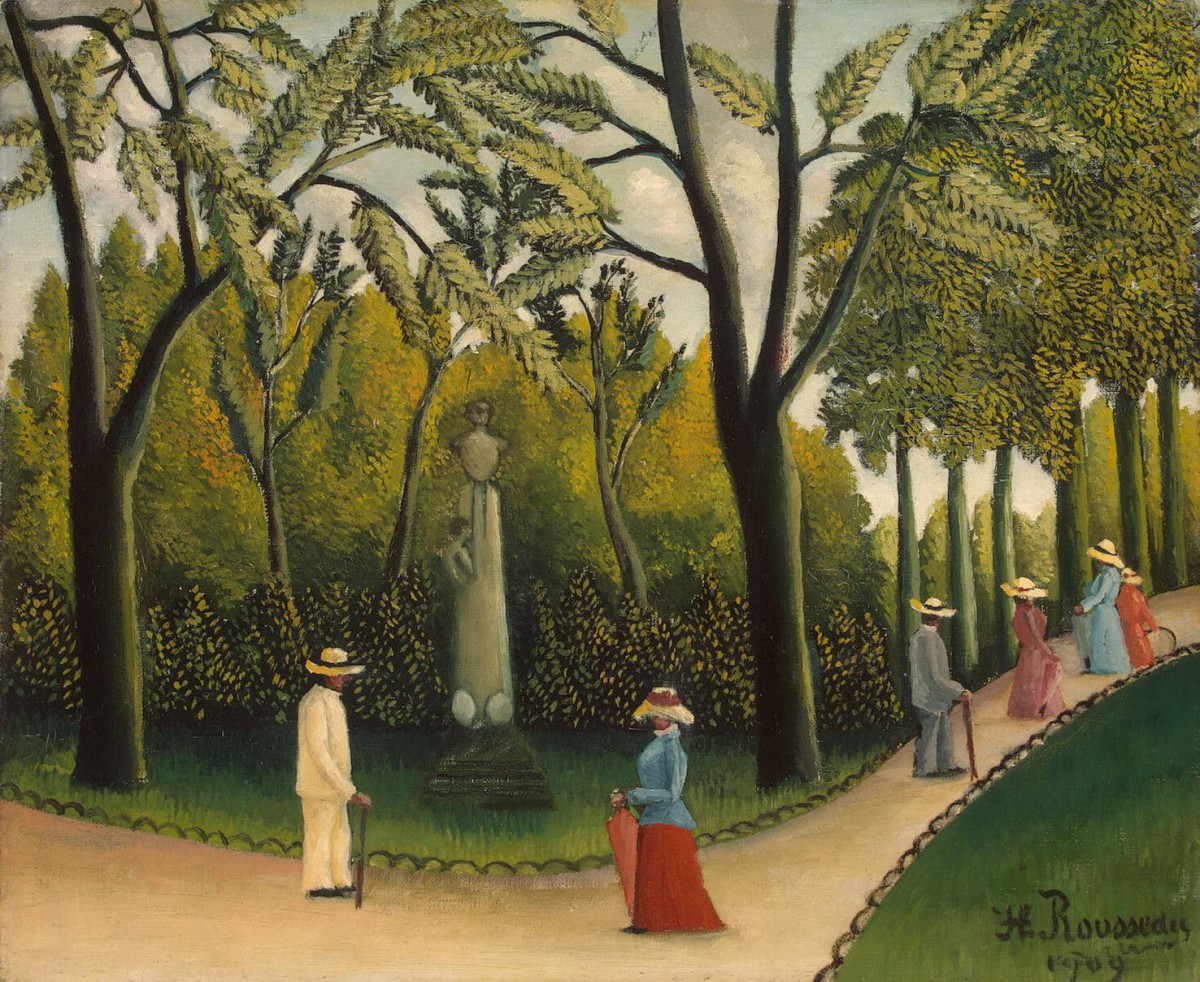 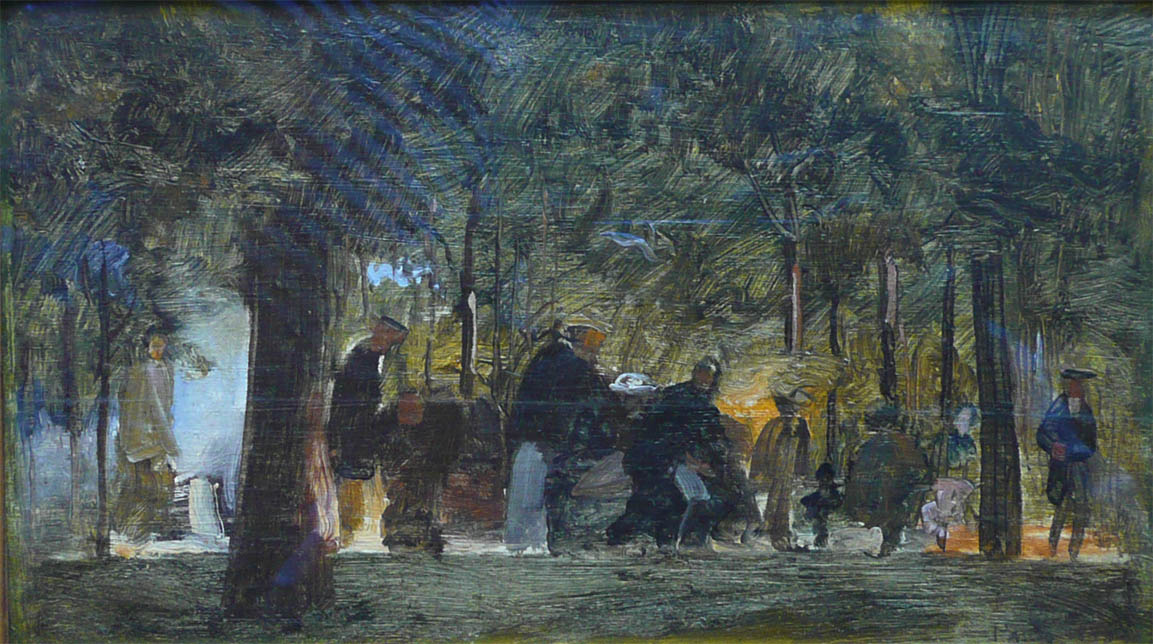 Here’s a short selection of websites about the Luxembourg gardens:

How to get to the Jardin du Luxembourg