New posts
You are at:Home»Monuments of France»Gros-Horloge, the pride of Rouen

The pride of the people of Rouen, the astronomic clock lays on a Renaissance arch spanning the busy street of rue du Gros-Horloge. This popular tourist landmark in the old town of Rouen is flanked by a Gothic belfry from the 14th century.

The Astronomical Clock of Rouen’s Gros-Horloge The astronomic clock lays on a Renaissance arch which has spanned the street since 1527. The clock lies roughly equidistant between the Place du Vieux Marché and the cathedral. The Gros-Horloge itself dates back to the 16th century and its movement from 1389.

The two faces of the clock display 24 rays of sun against a blue starred sky. 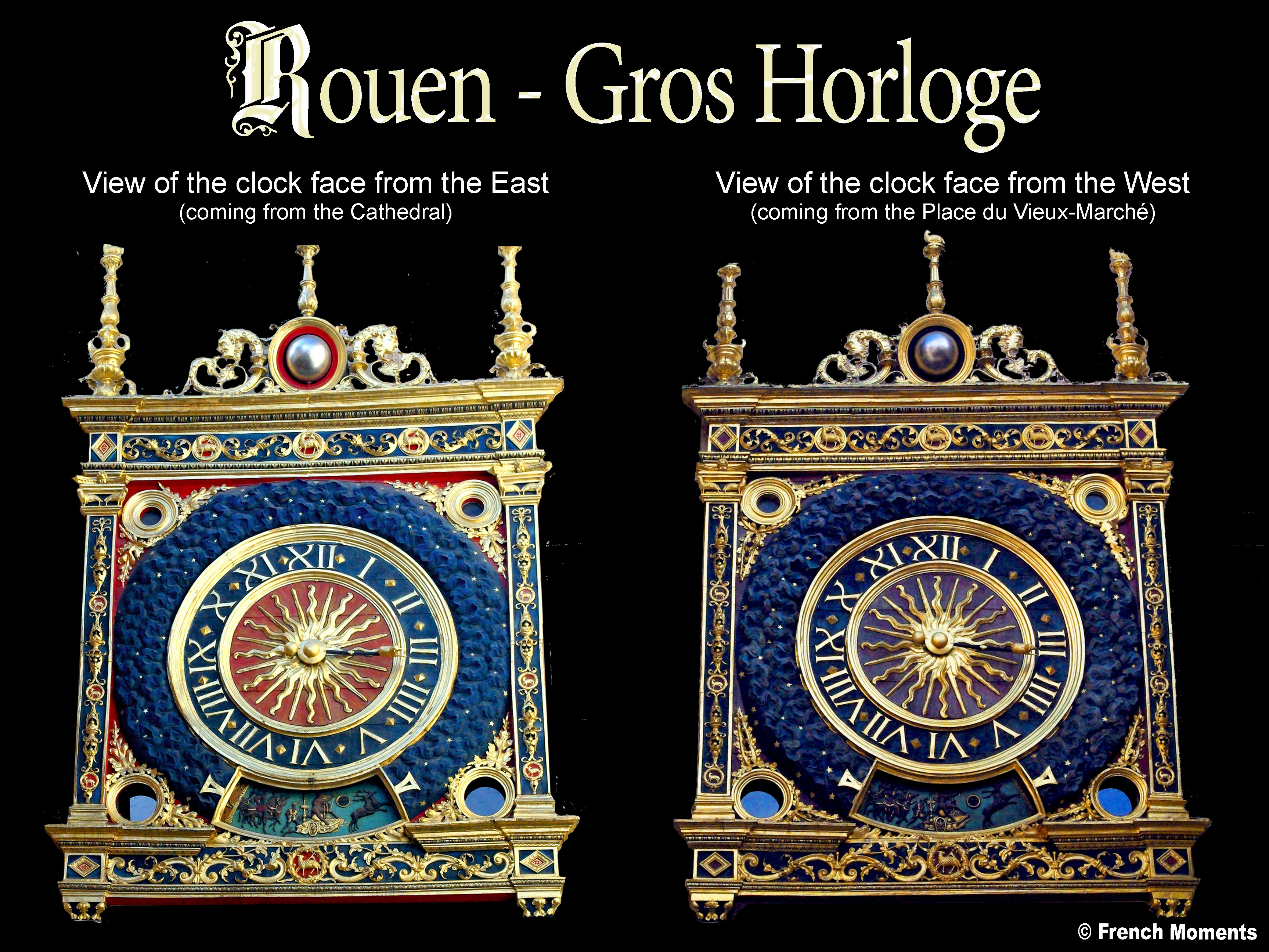 The faces of the clock © French Moments

The dial’s diameter is 2.50 metres. A single hand ending with a depiction of a lamb shows the hour. The moon phases are indicated in the oculus above the clock face, in a sphere of 30 centimetres in diameter. It completes a full rotation in 29 days. There is also a hand showing the week, inside an opening at the base of the dial. It is decorated by allegoric characters: Diane as the moon (Monday), Mars (Tuesday), Mercury (Wednesday), Jupiter (Thursday), Venus (Friday), Saturn (Saturday) and Apollo (Sunday). 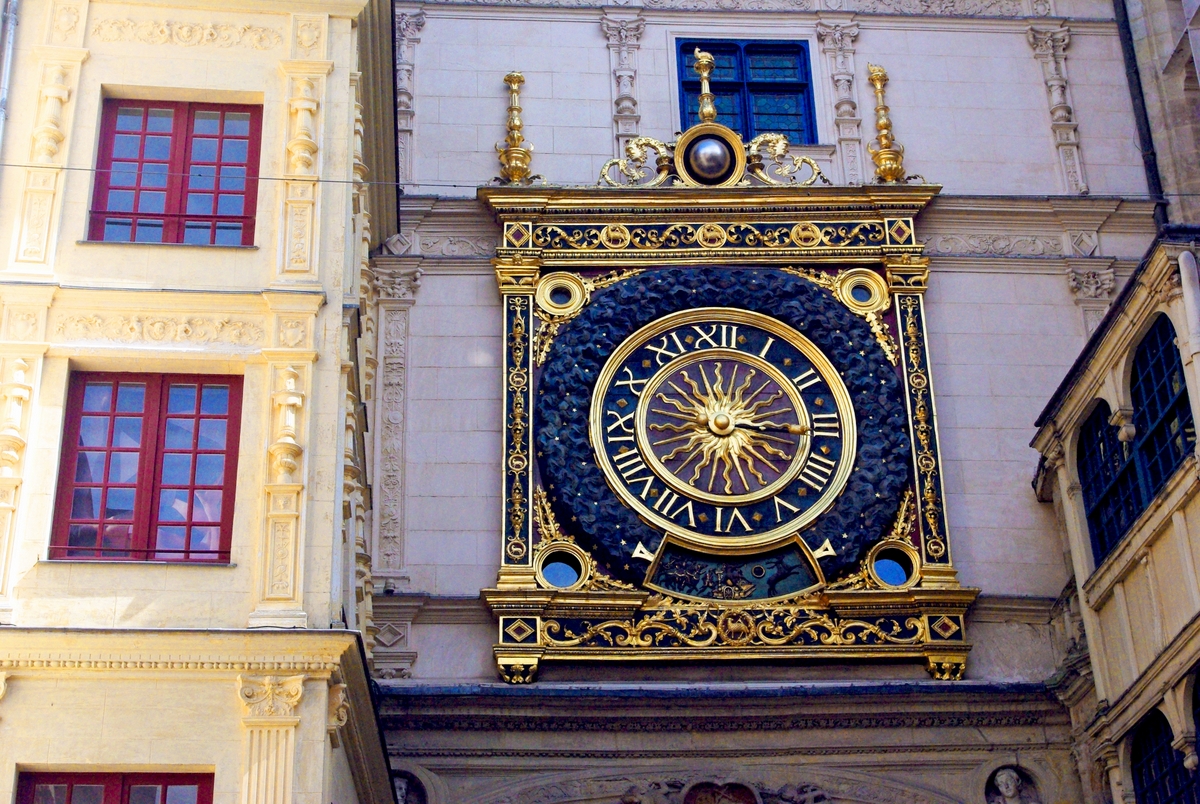 Although the mechanism of the clock is one of the oldest in Europe, it has been powered by electricity since the 1920s, despite the fact that the movement was still working efficiently.

The whole building was restored from 1997 to 2006 and the lighting of the clock at night makes it worth a visit. 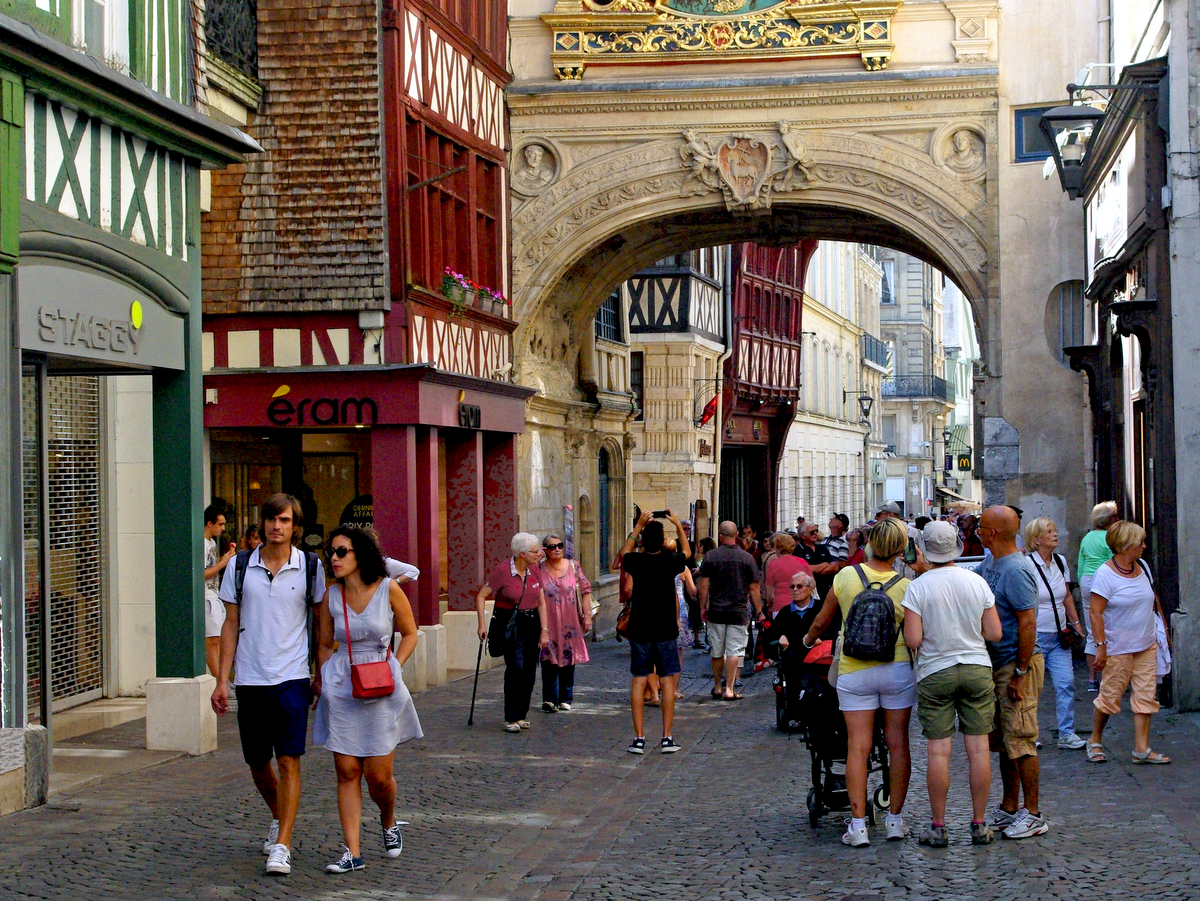 Remarkable sculptures can be observed while passing under the arch.

The coat of arms of Rouen is found at the centre of the archway featuring the lamb of God on a red background (colour of Normandy). It is hold by two angels, one with its head wrongly placed – the result of workers discontent at the time of the construction. 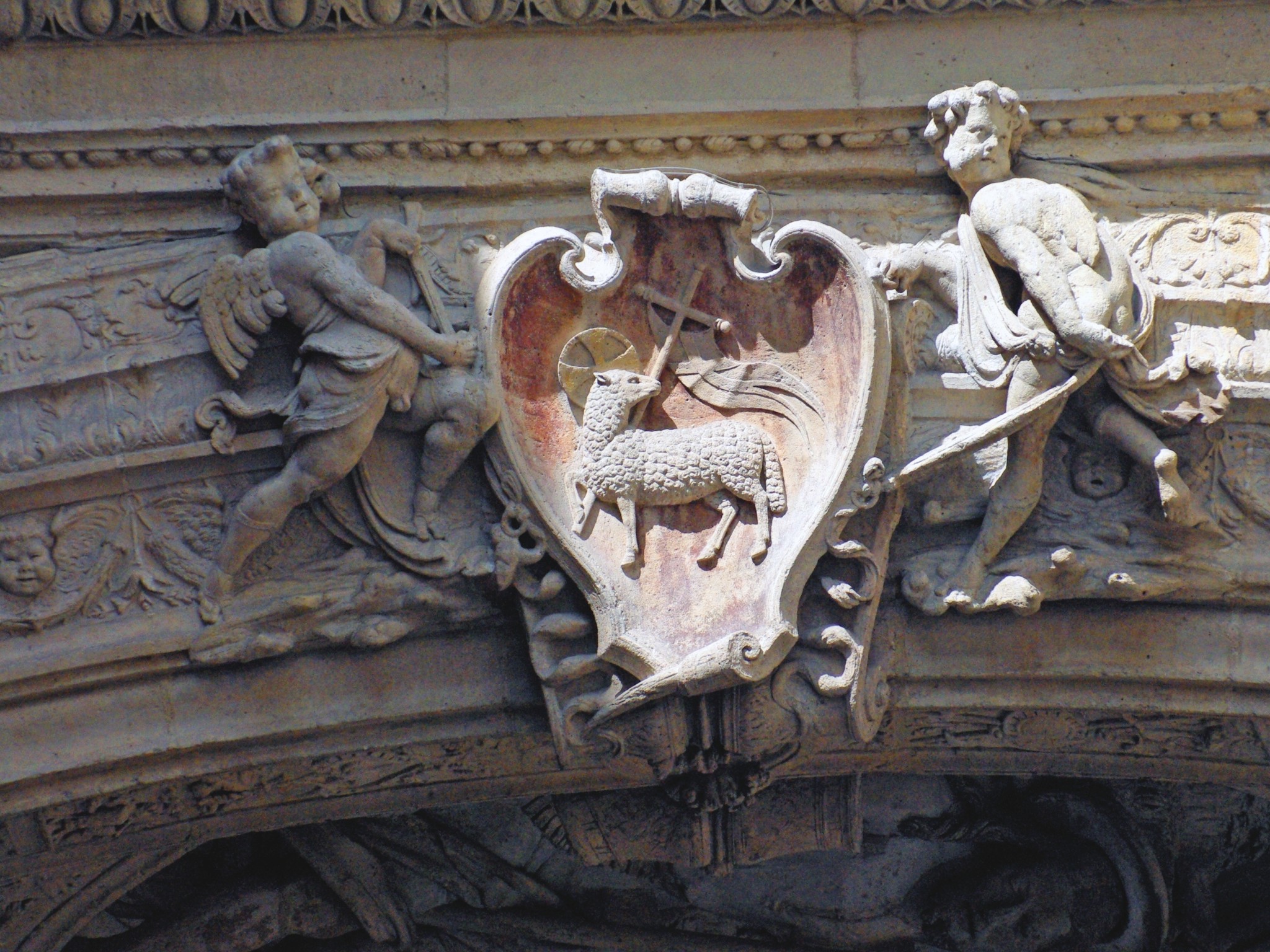 Detail of the Gros Horloge in Rouen © French Moments

Under the arch is a bas-relief of Christ as the Good Shepherd. 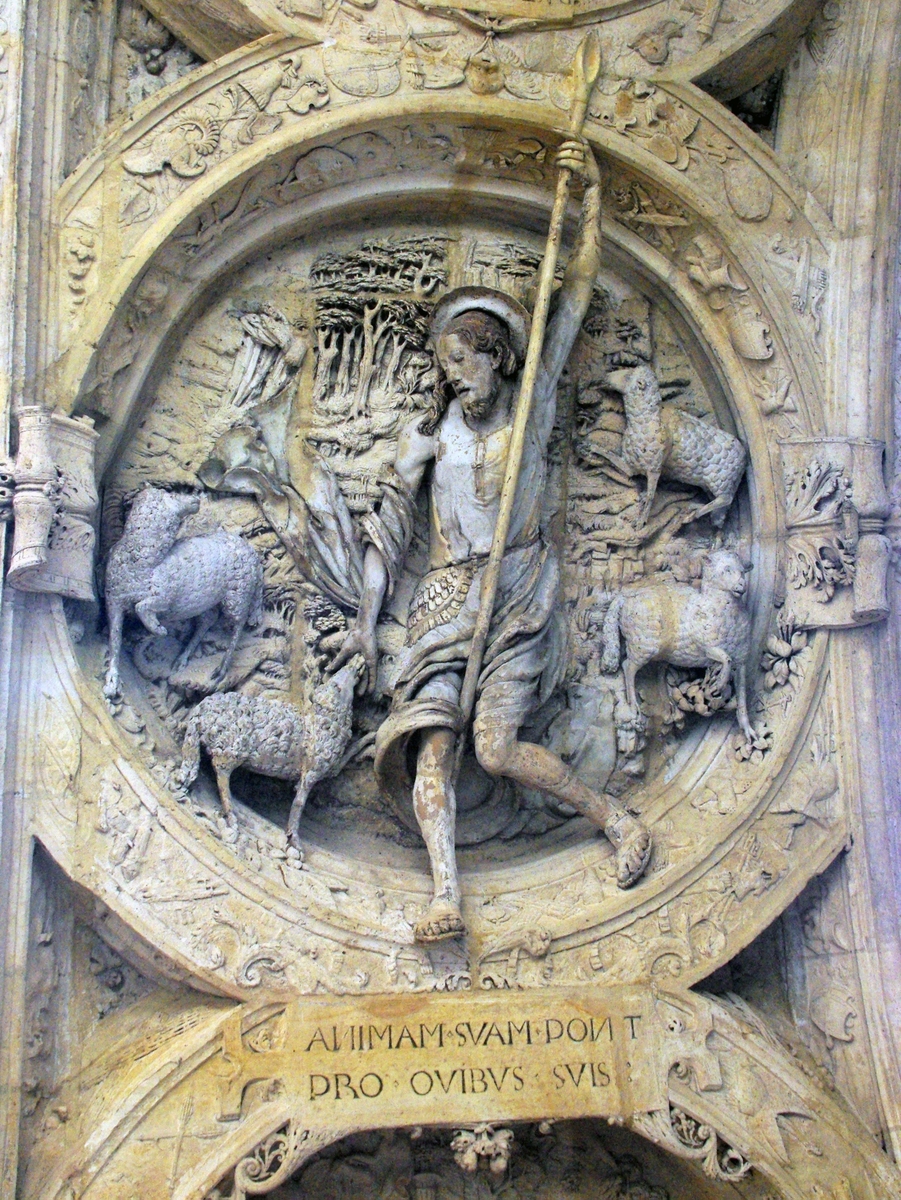 Bas-relief of Christ as the Good Shepherd © French Moments

On each side are representations of lambs in pasture. 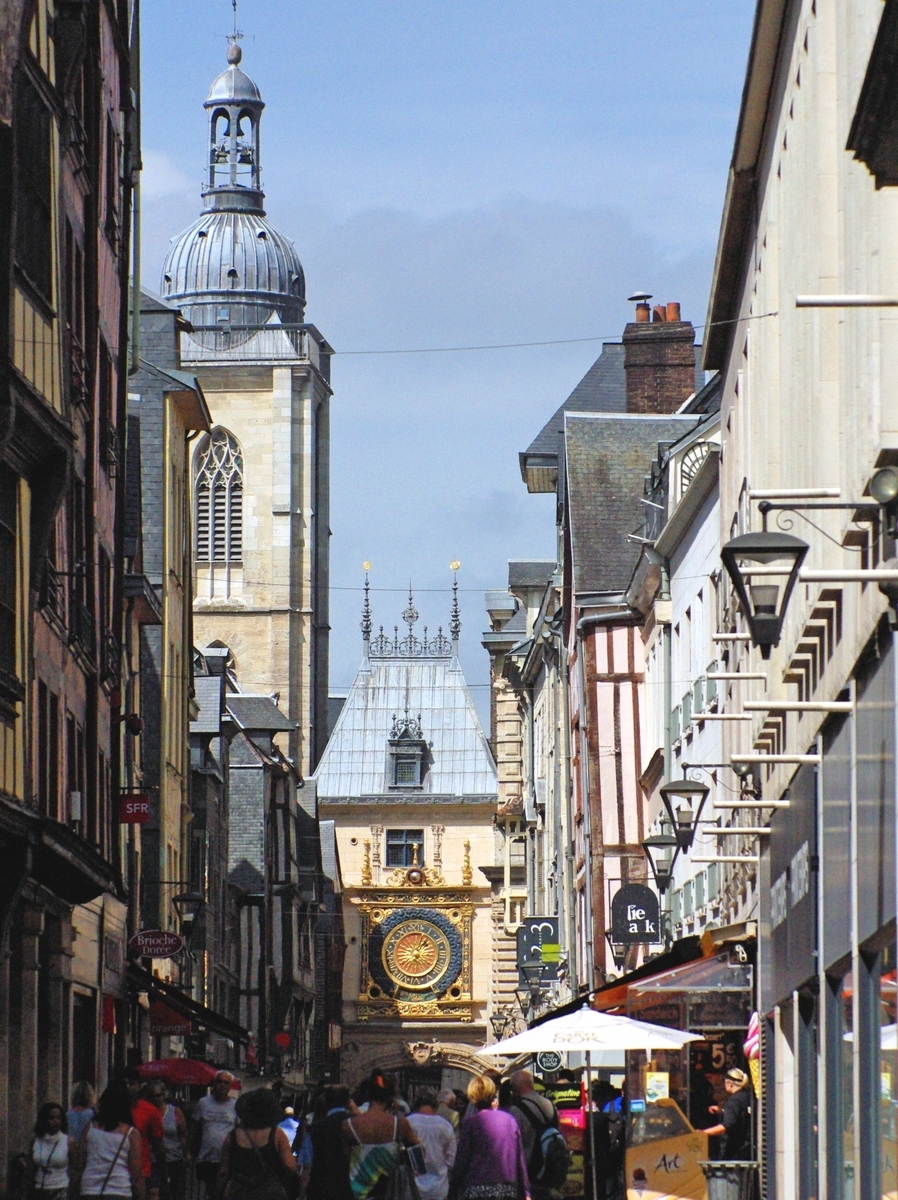 The Gros Horloge is flanked by a Gothic belfry built between the 14th and the 15th centuries, which houses the bells linked to the clock’s movement. The Gros Horloge and its belfry have been listed as a historic monument since 1862.

The museum houses the clockmaker’s workshop, the bells, the weights, the machinery and the dome of the bell tower. The various exhibition rooms are related to the building and the history of Rouen. A climb to the upper terrace offers a fine panoramic view of the city’s roofs and the Rouen Cathedral in the distance.

Visit the Tourist Board website of Rouen for more info.

Other astronomical clocks of interest in France