Located in the outskirts of Paris, the monumental Grande Arche de La Défense is a 20th-century version of the Arc de Triomphe. Instead of celebrating military victories, the monument is dedicated to humanity and humanitarian ideals. Alongside the Eiffel Tower, it is probably Paris’ most imposing landmark.

In the midst of the skyscrapers bordering the Historical Axis in La Défense, a strong unifying symbol was needed, one on a grander scale.

Once elected President, François Mitterrand announced that La Défense needed a monumental structure that would represent the French state for centuries to come. The project was called “Tête Défense” (Head Défense) and was part of the so-called “Grands Travaux” (the ‘Great Works’), which involved the construction of a series of impressive architectural projects such as the Louvre Pyramid and the new Bastille opera house.

Like the Eiffel Tower at the time of its inauguration, the controversial Grande Arche was not welcomed by everyone. The President was often compared to Louis XIV, the Egyptian Pharaohs or even “dieu” (god) by the media for his zeal for building long-lasting and imposing landmarks throughout the French capital. But for Mitterrand, the timing was once again historic: for plans were being made for the huge celebrations of the bicentenary of the French Revolution to take place in 1989.

The French president launched a great national design competition in 1982 and hundreds of proposals for the Head Défense were studied. Amongst them, Danish architect Johan-Otto Von Spreckelsen (1929-1987) was chosen. It featured an open cube to look like a window open to the world with and gazing towards the future.

The architect described his project as:

“a modern Arc de Triomphe, erected to the glory of the triumph of humanity; a symbol of hope that in the future people may meet freely”.

The construction was “a formidable challenge”

The construction of the monument was the “most formidable challenge ever met for the completion of such a building”. The work lasted four years and involved 2,000 workers. In 1987, Von Spreckelsen resigned and French architect Paul Andreu was commissioned with the task to complete the work.

Show your smartphone voucher at the ticketing desk, located under La Grande Arche at the top of the stairs, to exchange it for an official ticket.

Dimensions and facts of the Grande Arche de La Défense

The magisterial modern triumphal arch is undeniably a successful project blending perfectly with the surroundings thanks to its contemporary outline of white Carrara marble from Italy.

The monument is 110 metres tall by 110 metres wide by 112 metres deep and could hold Notre-Dame cathedral in within its arch.

Built by the French civil engineering company Bouygues, it has a prestressed concrete frame covered with glass on the southern and northern sides which house offices.

The roof and the viewing platform of the Grande Arche were open to the public until April 2010 when the lifts broke down.

25 years after its inauguration, the Grande Arche was in a sad state of repair. In 2015, renovation works started based on a 192 million euros investment by French company Eiffage. On the façades, white granite (more resistant) replaced the Carrare marble. The panoramic platform at the roof (the 35th level) reopened to the public in 2017. It now features a belvedere and a new walkway “between Earth and sky”.

Get your online tickets to the Observatory Deck of La Grande Arche!

The Grande Arche along the Historical Axis

Viewed from the distance, one notices the deviation of the Grande Arche from the Historical Axis. This happened for technical reasons (the network of railway lines and road tunnels underneath it made the project a complex one to complete). However, this allows one to better appreciate its remarkable cubic volume. 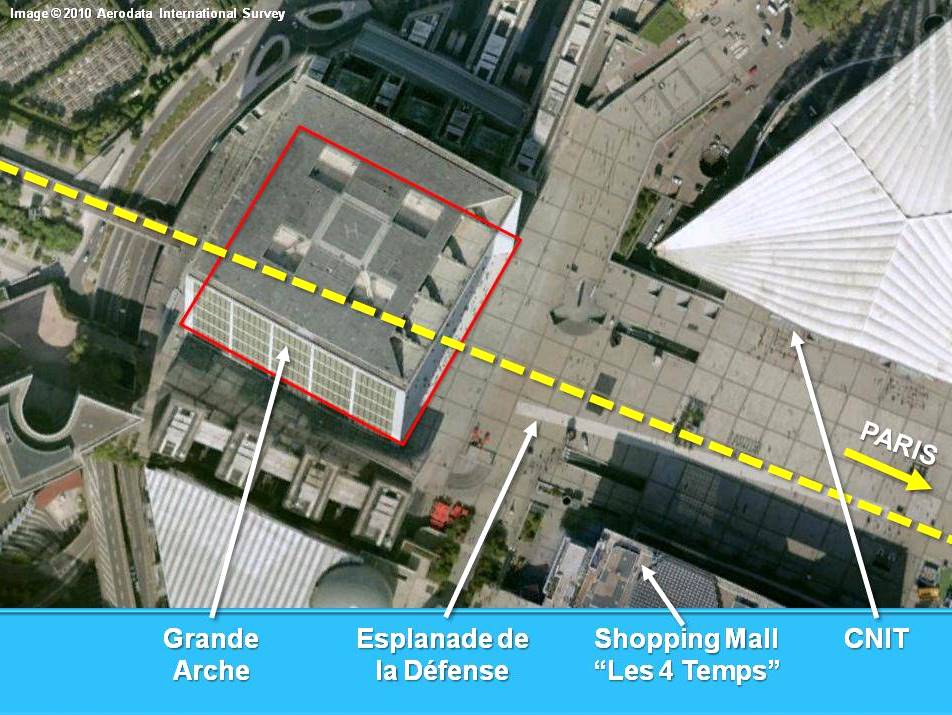 The Grande Arche is out of line by 6°33 in relation to the Historical Axis. This is exactly the same angle that the square courtyard of the Louvre is to the axis.

Not only does the Grande Arche occupy the place of honour on the western extremity of the Historical Axis, the urban planners also positioned it in such a way that it forms another perspective, with a perfect alignment towards the Eiffel Tower and the Tour Montparnasse.

Here is the view to the Grande Arche and La Défense from the top of the Arc de Triomphe:

… and the view to the Arc de Triomphe from the Grande Arche:

Again, the link to the sun is significant, for it sets in the centre of the Grande Arche de la Défense vault around the 24th of June.