What Is Germany In French: A Little Guide

What Is Germany In French: A Little Guide

What is ‘Germany’ in French? This might be an easy question for francophiles and francophones to answer. But we should never take for granted that for many the answer is not so obvious. So here is how French speakers say it… with further interesting facts to learn about the word.

What is ‘Germany’ in French?

The answer is… ALLEMAGNE!

For those of you who can read IPA, pronunciation in French is: /almaɲ/.

The translation of the word ‘German‘ in French is allemand (masc.) and allemande (fem.).

In turn, the Germans call France FRANKREICH and the French people are die Franzosen.

Due to its complicated history and different names to describe the territories that form present-day Germany, there are therefore a number of interesting things to mention. Let’s start with the Holy Roman Empire…

The history of Germany is a complicated one. The nation-state of Germany dates back to 1871 only. Before then most of the territory of modern Germany was included within the Holy Roman Empire.

Contrary to states likes France or England, the Holy Roman Empire never achieved such a political unification. It was a decentralised union of autonomous rulers who each governed their own territories. There were hundreds of them, including kingdoms, principalities, duchies, counties, prince-bishoprics, Free Imperial Cities, etc.

For example, until 1648, Alsace was an inextricable mosaic of territories. Like a giant puzzle!

The origins of the name Allemagne

Allemagne comes from the Old French alemaigne, alemans. In turn, these words derive from the name of a confederation of Germanic tribe, the Alemanni. From the 3rd to the 6th centuries, the Alemanni settled in an area comprising of the present-day Alsace, northern Switzerland, and parts of Baden-Württemberg.

Interestingly the name “Almain” or “Alman” was used for Germany in Britain until the 16th century. The first use of the word “German” was first attested in 1520. At first, it was used as a synonym to Almain… and it soon replaced it for good.

Look at the works of Shakespeare for an example. In Othello ii,3, (ca. 1603), the writer uses both “Almain” and “German” when Iago describes the drinking prowess of the English:

I learned it in England, where, indeed, they are most potent in potting: your Dane, your German, and your swag-bellied Hollander—Drink, ho!—are nothing to your English. […] Why, he drinks you, with facility, your Dane dead drunk; he sweats not to overthrow your Almain; he gives your Hollander a vomit, ere the next pottle can be filled.

The origins of the name Germany

During the Roman era, the Germani was the name of a number of tribes.

We owe that name to the Gauls who first called the people who lived east of the Rhine.

The Romans later adopted that word. It derived into Latin Germania (3rd century BC). The name was used to describe fertile land behind the limes.

The first Roman to use Germanus in writing to describe tribes in north-eastern Gaul was Julius Caesar in his Commentarii de Bello Gallico.

The origins of the name Deutschland

It is believed that the word Deutsch derives from Old High German thiota or diota meaning people, nation or folk. That word shares a common etymological origin with teutā. That word gave the Celtic tribal name Teuton.

What are the names of the German Länder in French?

Can you spot two spelling mistakes on the map above?

Here’s the list of the 16 states of Germany in French and in English: 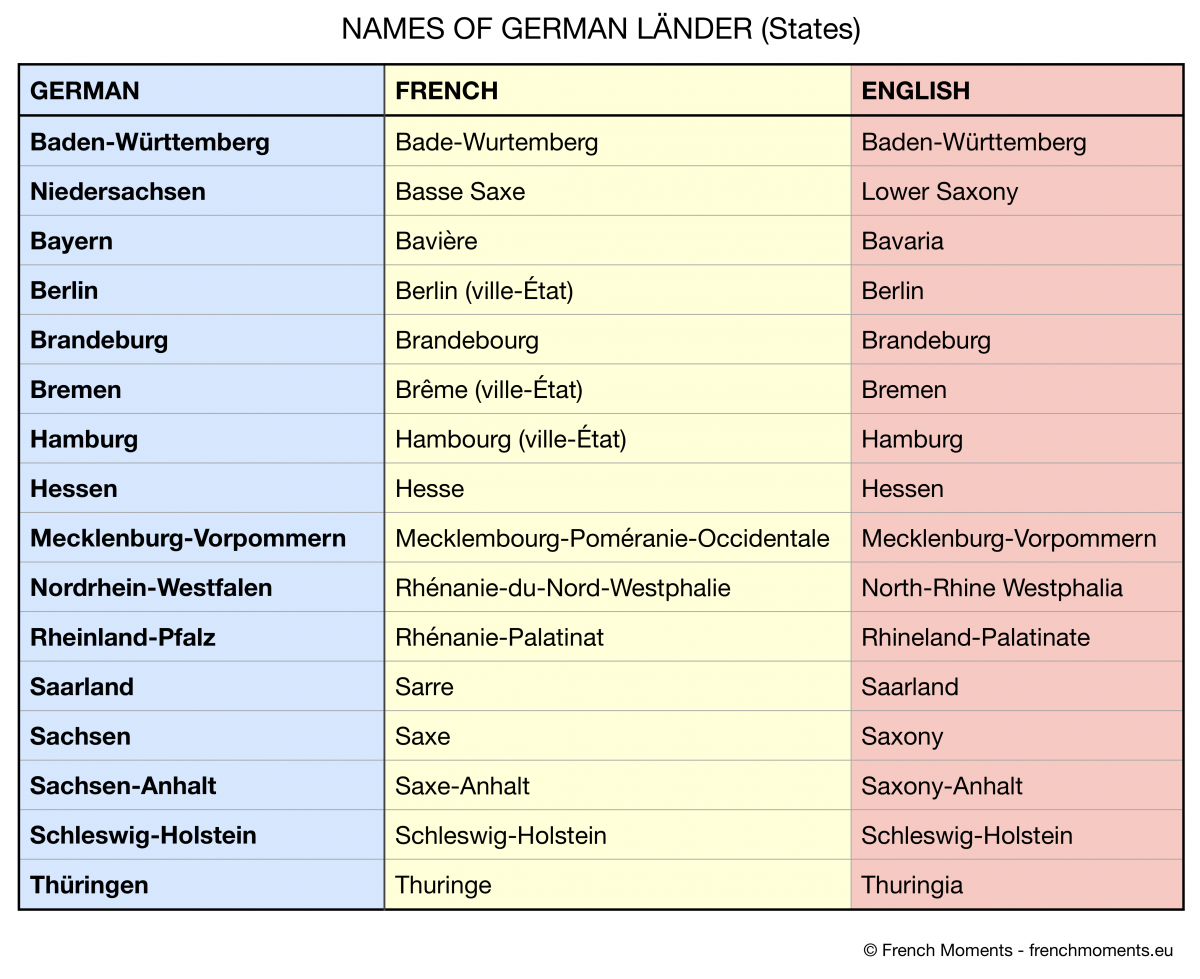 What are the German cities in French?

The largest cities of Germany have a different name in French. However, there is the notable exception of Berlin:

Generally, all suffixes -burg are francised -bourg, except for Regensburg => Ratisbonne.

K is replaced by C:

With the exception of:

The ü is simply replaced by u in French:

Hydronyms and Oronyms in German and French

A hydronym is a name given to a body of water.

An oronym is applied to naming a mountain or hill.

Here are a few examples of names used very often: 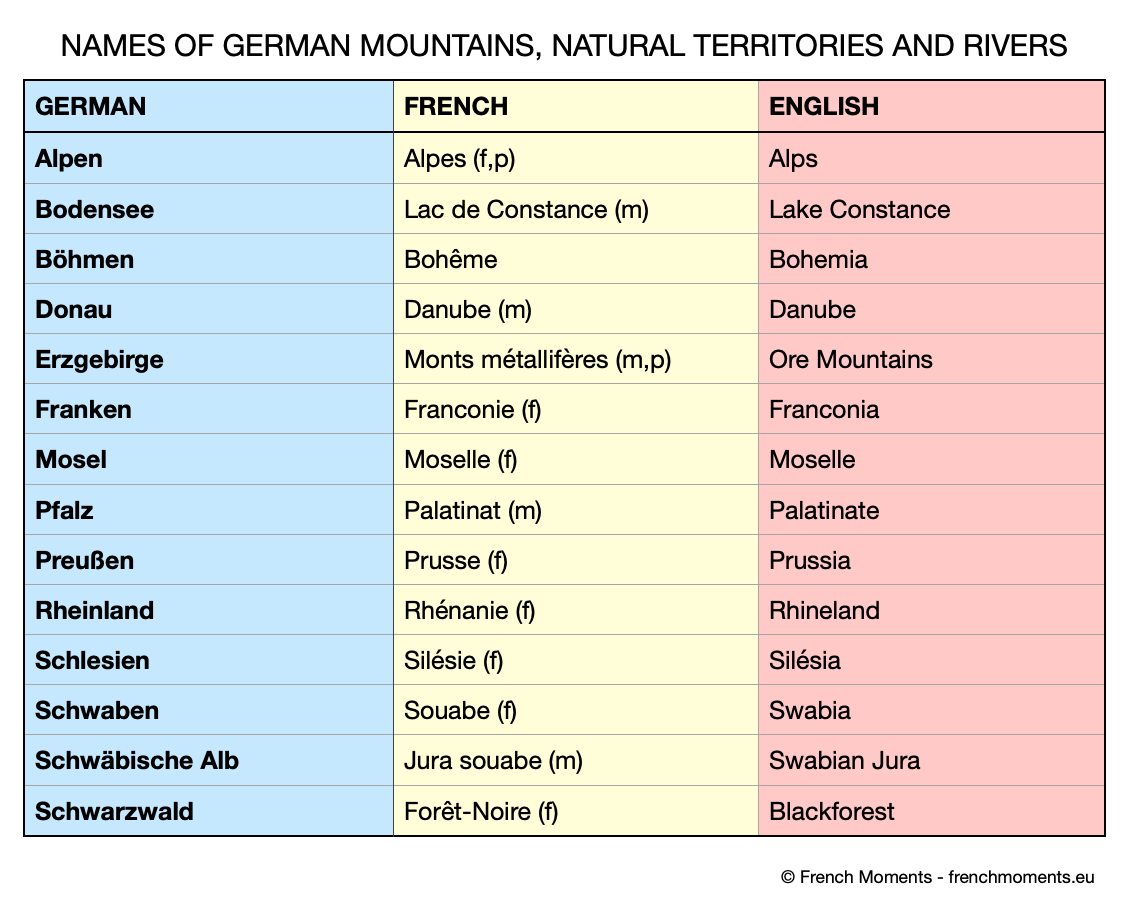 The geography of France in German

Inversely, places in France are sometimes named differently in German. Overall the German names tend to be the same as in French. However, there are a number of exceptions, particularly in places where German was spoken.

This is particularly the case in Alsace (das Elsass) which used to be part of the Holy Roman Empire in the Middle Ages. 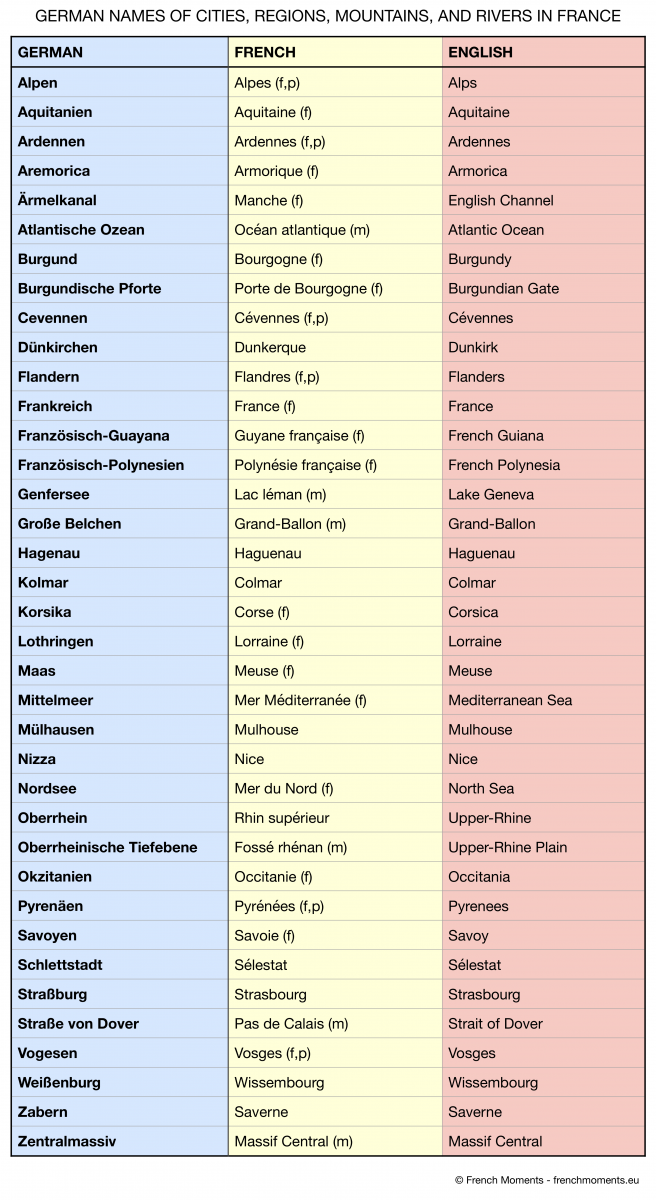 Schengen, a symbolic place in Luxembourg

The border starts at the tripoint with the French-Luxembourg and the Luxembourg-German borders on the Moselle River near Schengen.

In 1985 five of the ten member states of the European Economic Community (EEC) choose the symbolic site of the Luxembourg village for the signing of the Schengen Agreement. Five years later the treaty led to the creation of Europe’s Schengen Area. Since then internal border checks have largely been abolished.

Between the Moselle and the Rhine

The French-German border finds its way to Saarbrücken across a rural landscape before crossing the Northern Vosges. In doing so it marks the limit between the French provinces of Lorraine and Alsace and the German states of Saarland and Rhineland-Palatinate.

At Wissembourg in Alsace, it follows the Lauter River to the South of Karlsruhe. This is where the border meets the River Rhine.

The French-German border then follows the Upper Rhine downstream, forming the eastern border of Alsace.

The Rhine also forms the border between Alsace and the state of Baden-Württemberg. The river passes by Strasbourg and Breisach.

The tripoint at Basel, Switzerland

The French-German border terminates at the tripoint locally known as Dreiländereck. Hence this is where the borders of France, Germany and Switzerland meet:

Twin Towns between France and Germany

It is estimated that nearly 20,000 French people are actively taking part in twinning programmes.

Out of 6,700 committees in France, nearly 2,300 include French-German twinning towns and villages.

The first French-German twinning programme was created between Ludwigsburg (Baden-Württemberg) and Montbéliard (Franche-Comté) in 1950.

The first twinned committees created by the largest cities of France were:

Until 1975 there were three incentives to create French-German twinning programmes:

Cities and towns sharing a common feature or interest

Many French and German twinned cities and towns share a common feature or interest.

Why do some French cities have twinned twice?

Some French cities have two twinning towns in Germany.

This is the case of:

As you can see, it only applies to large French cities, not small towns or villages. In fact, if you look closer you’ll realise that:

Following the Fall of the Berlin Wall (9th November 1989) and the German reunification (3rd October 1990), some of the largest cities of France wished to engage in a twinning programme with an East German city of similar size. Most of them were created in Autumn 1990.

Let’s mention the interesting case of Cottbus in Brandenburg. The German city was formerly situated in the GDR. Interestingly, Cottbus was twinned with Montreuil in the west suburbs of Paris as early as 1959. The reason for this is quite simple: the municipality has traditionally been a communist stronghold!

Germany in French: Find out more!

Petit Papa Noël: the story of the song

The Christmas pyramid: Origins and Traditions