Discover Ferrette in the Spring

Discover Ferrette in the Spring

On our last day in Alsace, we chose to drive South of the region to the picturesque site of Ferrette. This area is known as the Sundgau and extends from Mulhouse to the Swiss border in Lucelle.

This month, the village of Ferrette was nominated one of the 22 Best Loved Villages of France (Les Villages Préférés des Français), a popular TV programme by French channel France 2 presented by Stéphane Bern. We wanted to see by ourselves what was so attractive in the village and here are our best shots…

It was Springtime when we visited Ferrette (Pfirt in German). The visit started from the carpark in front of the church where the steep main street leads up to the castles in ruins.

The parish church of Ferrette is dedicated to St. Bernard-de-Menthon whose statue is featured in the tympanum of the central door. The saint is seen holding a model of the church.

Next to the church is the presbytery, the house where the Catholic priest resides.

Further up lies the little medieval garden and opposite a curious calvary with a Christ sheltered by a roof.

The paved main street is lined by interesting houses, some half-timbered, others in Renaissance style.

The red-coloured Renaissance façade of the town-hall features mullioned windows and the coat of arms of the county of Ferrette, that is two fish and of the Habsburgs who possessed the little town and the Sundgau from 1324 to 1648.

Interestingly, today the title of Count of Ferrette is hold by the prince of Monaco due to the marriage of his Grimaldi ancestor to the heiress of the Mazarins in 1777.

The access to the castles is still paved with the original cobblestones of the Middle-Ages. From the village, the steep path goes under a gatehouse.

The two castles of Ferrette

The first mention of Ferrette Castle dates back to 1105 when it belonged to the Counts of Montbéliard. One of them, Frédéric 1st inherited the domain and made it his residence around 1125. He took the name ‘Count of Ferrette’ from the nearby village. During the Middle Ages, his county became one of the most powerful in Upper Alsace. In 1324, Jeanne de Ferrette, the daughter and heiress of the last count of Ferrette married Albert II of Habsburg, who had possessions in Austria and along the Rhine River.

In 1635, during the Thirty Years’ War, the French army set the upper castle on fire. Ferrette and its castle became French in 1648 at the signature of the Treaty of Westphalia. Louis XIV rewarded Mazarin in 1659 with several fiefdoms including Ferrette.

In 1789, Revolutionaries from the Thur Valley destroyed the lower castle which was then permanently abandoned. The castle was listed as a historic monument by the French State in 1842.

The main entrance to the lower castle goes under a semicircular arch restored in 1977.

The first castle is the “Château Bas” (lower castle), built around the 12th century keep in 1488. It served as a forward post for the “Château Haut” (upper castle). Originally there were four corner turrets intended for firearms. The bases of three of them are still standing and the fourth one was replaced by the St. Catherine Chapel built around 1660 to replace the original one situated in the upper castle and destroyed by a fire in 1635.

Around 1600, the fortress was the residence of the bailiff and tax-collector of the fiefdom and included four rooms, seven bedrooms, two kitchens, a stable for three horses, a stove and granaries.

From the lower castle there is a fine view of the rooftops of Ferrette. 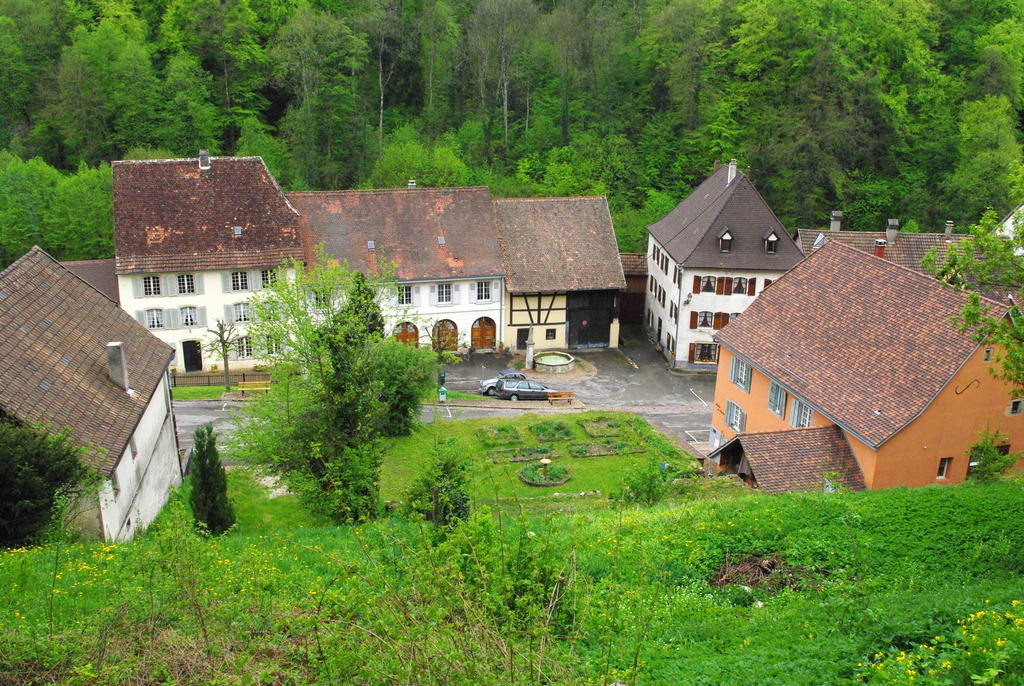 The 13th century logis (the castle’s central dwellings) was partially carved into the rock. In 1600, the fortress had six rooms, eleven bedrooms, a kitchen, a stove and a cellar. To defend it, the garrison could make use of many weapons: small canons, muskets with stocks, double muskets, halberds and pikes.

It is hard to believe that there was a well in this room. In 1600 fresh water was drawn via two leather buckets fixed to a big, strong, iron chain. After the Thirty Years’ War, the well was filled in and water had to be carried up to the castle every day. The brick vault that can still be seen today is the remains of the cistern that was used for collecting rain water.

The keep tower dates from the 12th century and its platform is accessible to the public.

The Ferrette flag flies proudly over the old town.

From there, visitors can enjoy a beautiful view to the rooftops of Ferrette, the Jura mountains, the Sundgau, the Vosges and the Black Forest mountains.

Although a small town, Ferrette is a place loaded with history and we wish the village good luck with its bid for the 4th edition of the Best Loved Villages of France.

Lourmarin in Provence: What To See and Do

Bonnieux in Provence: What To See and Do