The perched village of Eze commands stunning views of mountains falling sheer to the Mediterranean. With its clusters of houses perched on rock outcrops above the cliffs, Èze truly is one of the most celebrated resorts of the French Riviera.

Eze is situated between Nice and Monaco on the Corniche Roads at an altitude of 426 m above sea level. The entrance to the perched village itself is crossed by the Moyenne Corniche (D6007). 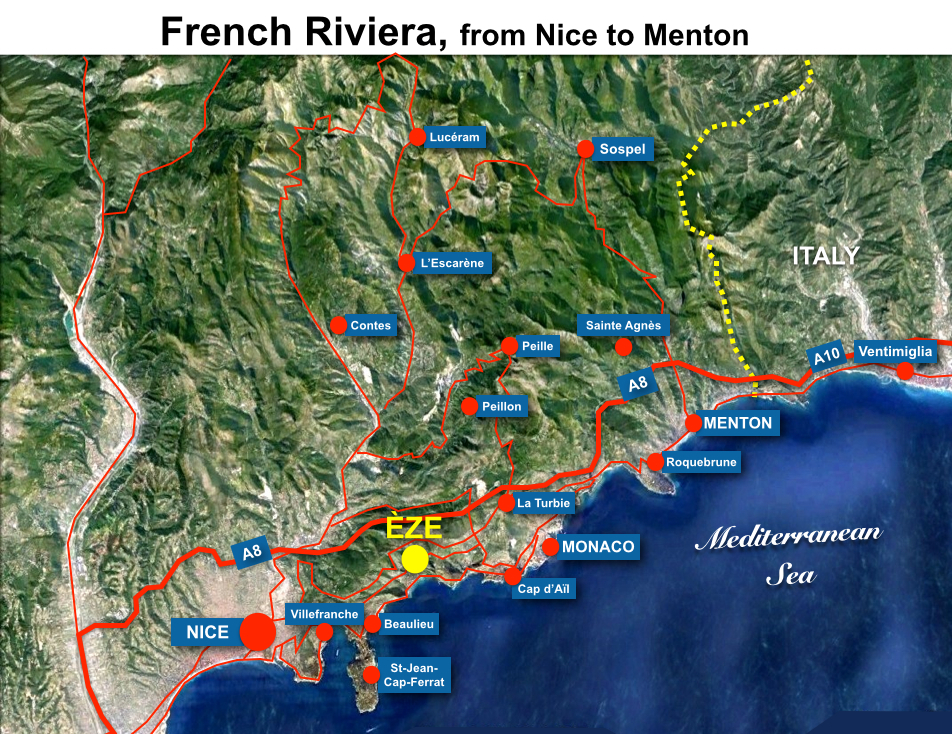 The commune of Eze is made up of three main urban areas: the perched village to the hilltop, Èze-sur-Mer on the Mediterranean coast and between them, a residential zone with villas called Saint-Laurent-d’Èze.

The motto of Èze is “Isis Moriendo Renascor” (in death I am reborn) and its emblem features a phoenix perched on a bone.

Eze: a bit of History 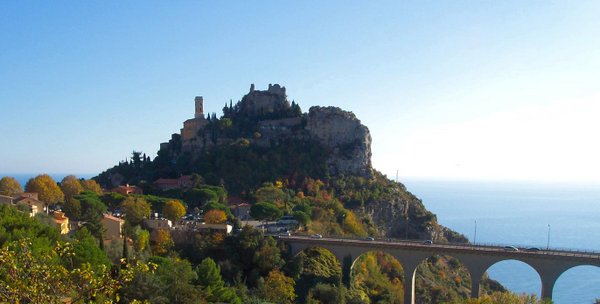 It is believed that the surroundings of Èze were first populated around 2000 BC by Celto-Ligures tribes. In Mont-Bastide to the west of the perched village were found the oldest traces of life in town. The region was later colonised by the Romans and the first mention of the site dates back to the 2nd century in the itinerary of Antonin. 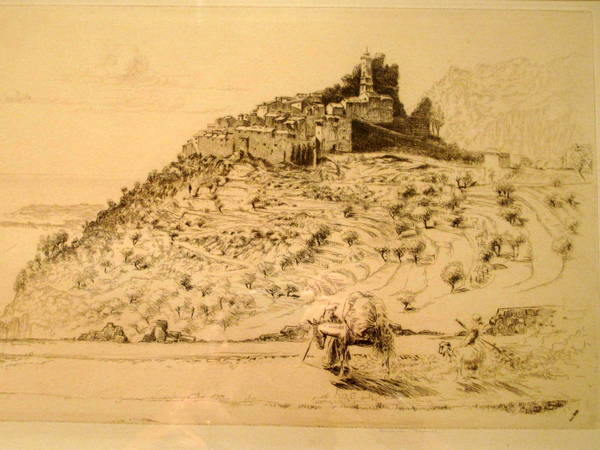 Old engraving of the village

In the 8th century, the coastal region was not safe for the population who preferred to seek refuge in the rocky spur that now occupies the perched village. The threat were the Moors who occupied Èze for some 80 years before being chased by William of Provence in 973.

In 1388, Èze and the County of Nice was put under the authority of the House of Savoy.

Its proximity with Nice and its strategic eagle’s nest position commanding a fair view over the Mediterranean coastline brought the village a few difficult times: in 1543 French and Turkish troops seized Èze under the command of Barbarossa. French king François I and his ally Soliman the Magnificent were waging war against Charles V and the House of Savoy.

Then in 1706 Louis XIV had its fortifications and castle dismantled during the war of the Spanish Succession along with the castle of Nice. 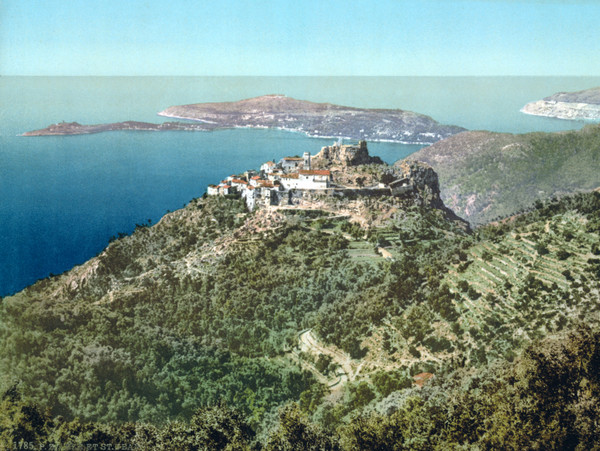 Old photo of the village

After the Napoleonic Wars, Eze was part of the Kingdom of Piedmont-Sardinia.

In 1860, Èze unanimously voted for its annexation to France by referendum, as did the whole County of Nice.

The village started to become a tourist attraction with the arrival of the railway between Nice and Menton.

The Perched Village of Èze 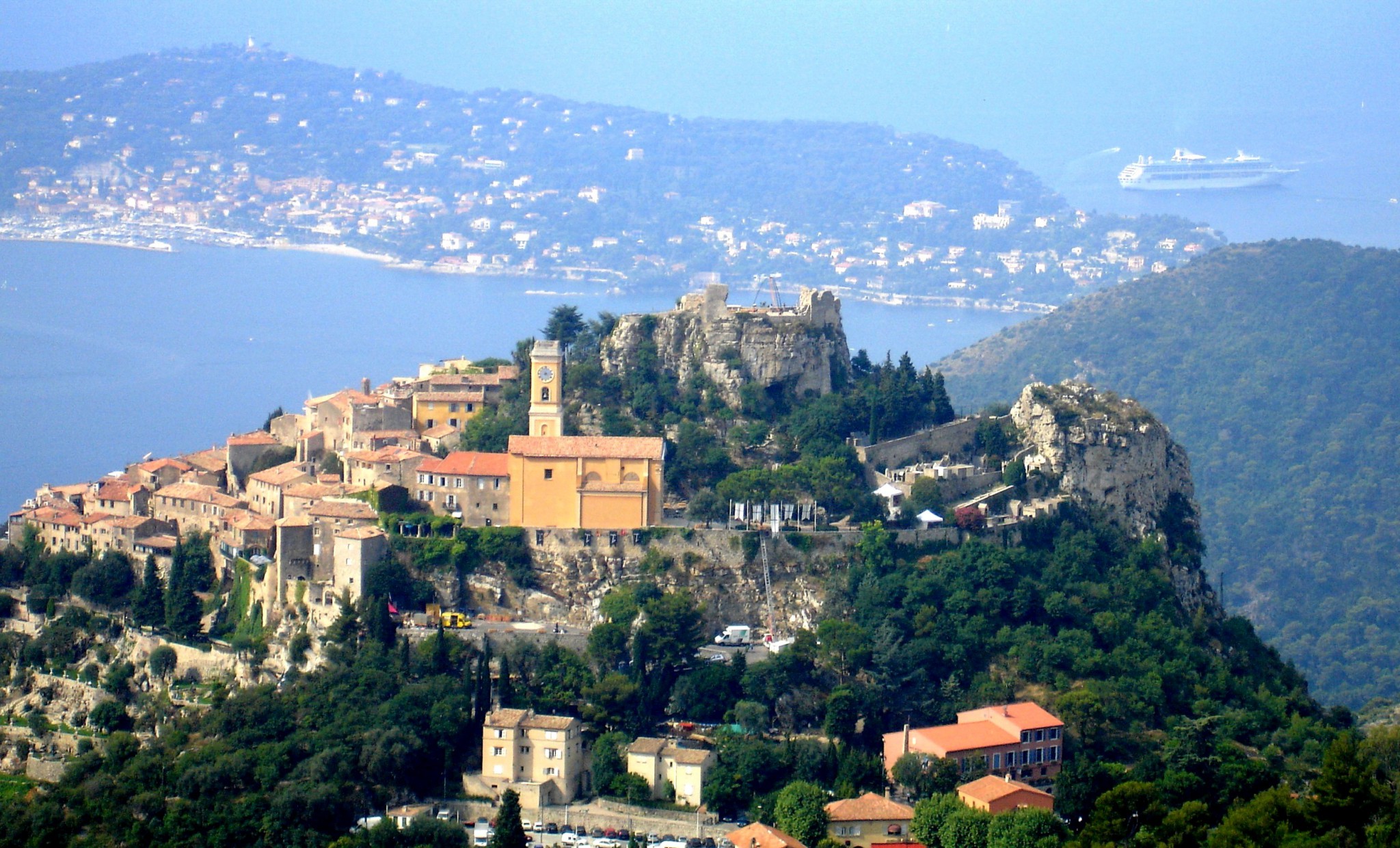 “It is really an enchantment the panorama of the corniche… The curves of the coast offer at each step a splendid background. The ruins of Eze, planted on a cone-shaped rock, with a picturesque village perched on a sugar loaf, stop the glance inevitably. This is the most beautiful point of view of the road, the most complete, the best composed. At the foreground there is the tremendous opening of mountains that open to let appear the Saracen fortress at the bottom of an abyss dominating another abyss.“

The village from above © Office de Tourisme d’Eze

Unlike villages like Peillon, Èze has sometimes been described as a “Museum-Village” (Musée-Village) as only a few people of local origin reside within the walls of the old perched village. Many gift shops, art galleries, and restaurants cater for tourists but might repel some of them looking for more off the beaten path sites. However the charms of the village is undeniable, particularly when the high-season of summer is avoided. From above the lofty cliffs, the panoramic and stunning views of the Mediterranean Sea are unforgettable. 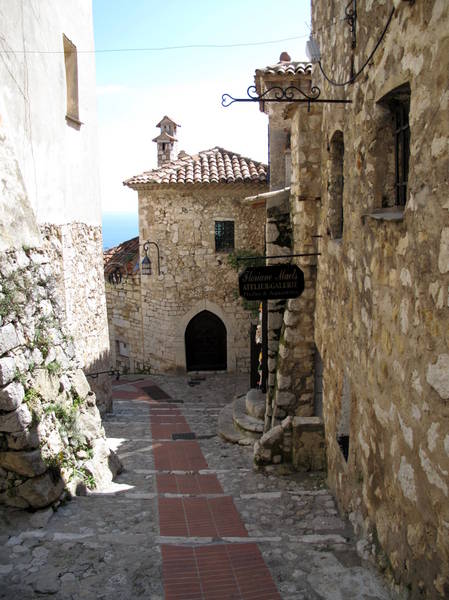 The old village is made up of a maze of narrow winding little streets punctuated by shady small squares and vaulted passages. The rocky spur is crowned with the ruins of the 12th century castle where lies a fine exotic garden. 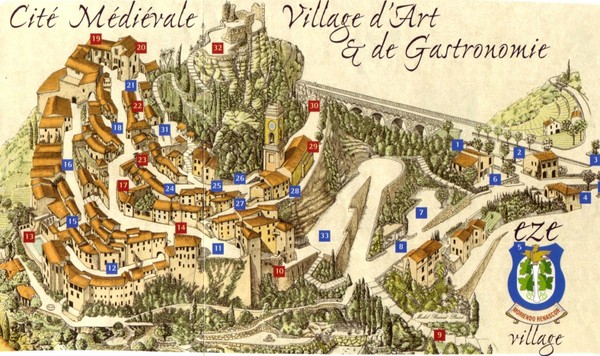 Map of the village

The entrance to the pedestrian village is marked by the double fortified gate of “La Poterne” built by the counts of Savoy in the 14th century as part of their plans to improve the fortifications of Èze. This was the unique access to the village during the Middle-Ages. 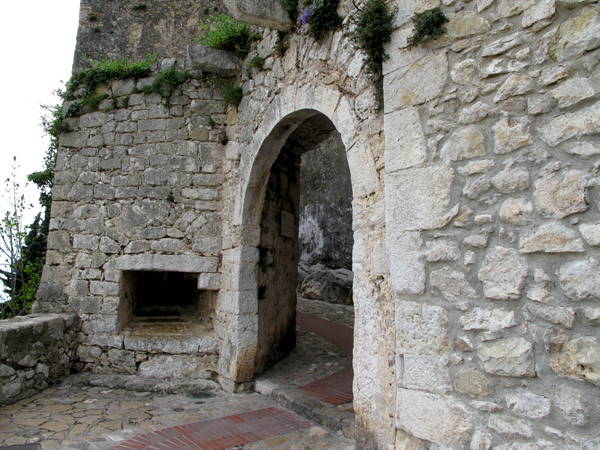 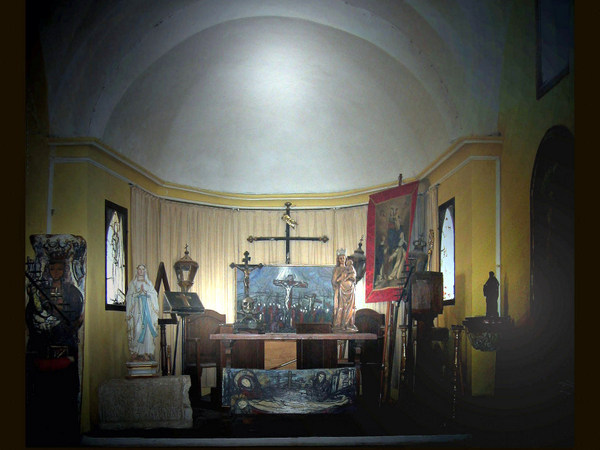 The main street (Rue Principale) winds up to the Chapelle des Pénitents Blancs. Also known as Chapelle de la Sainte-Croix, this is Èze’s oldest monument, built in 1306. The sanctuary hold the meetings of the White Penitents who were in charge of helping victims of the Plague. The particularly shape of its bell-tower recalls the time when Èze was linked to the Republic of Genoa. Inside are old crucifixes and statues of the Virgin dating back to the 13th and 14th centuries. On 15 and 16 April 1860, it was in this chapel that the people of Èze voted unanimously to be joined to France. 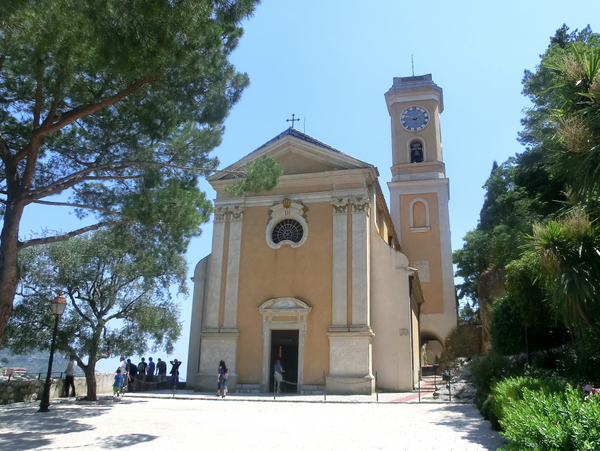 The light-ochre church of Notre-Dame de l’Assomption was rebuilt between 1764 and 1778 on the foundation of a former sanctuary that was falling apart. The bell tower was added in the 19th century. Contrasting with the Neo-classical façade, the interior of the church displays a rich Baroque decoration with altarpieces and trompe-l’œil windows. The church has been listed by the State as a Historic Monument in 1984.

The Interior of the Church © jimmyweee – licence [CC BY 2.0] from Wikimedia Commons

Eza Castle and the Exotic Garden

At the very top of the village, the ruined castle of Eza boasts one of the most beautiful botanical gardens on the French Riviera and offers a breathtaking view over the sea and the coastline. The garden was created on a steep sloping ground after World War II by Mayor André Gianton and Jean Gastaud of the Exotic Garden of Monaco. 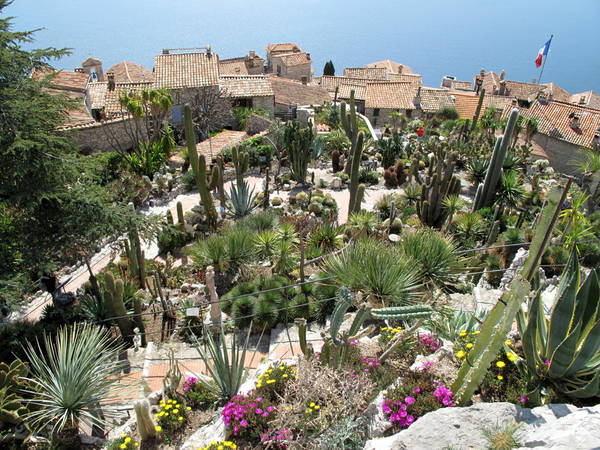 The exotic garden of Eze by Tangopaso (Public Domain)

The garden contains a great collection of cacti and succulents originating from countries around the Mediterranean Sea, Africa, and the Americas. These plants adapted to arid or tropical climates find the Riviera’s climate favourable to their growth. 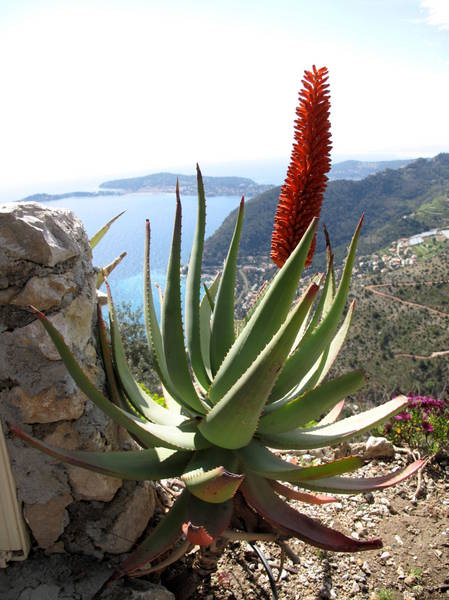 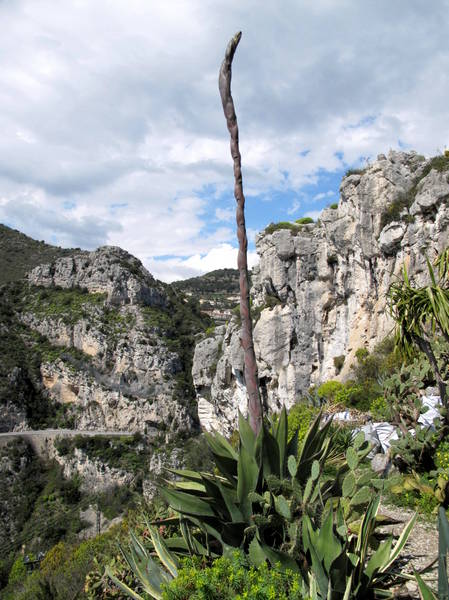 At the Exotic Garden – Agave salmiana by Tangopaso (Public Domain) 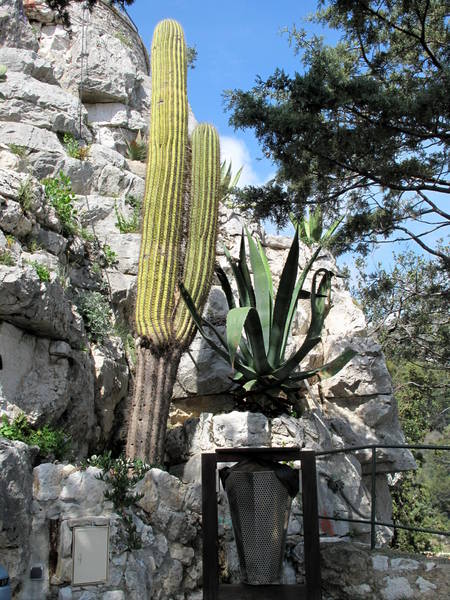 At more than 429 m, the garden dominates straight down the sea. An orientation table locates the main famous sites on the French Riviera up to 120 km from Saint-Tropez to the Estérel Mountain range, the Lérins islands, Nice, Saint-Jean-Cap-Ferrat and the Italian shores. Under specific atmospheric conditions in winter, the Corsican shores can be seen towards the south-east. 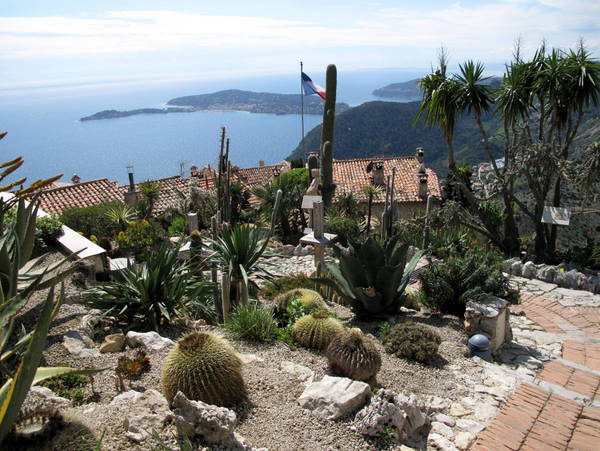 In the outskirts of Èze, the Revère Fort was part of the Séré de Rivières fortification system. Built between 1879 and 1885, it hides underground barracks linked by a wide network of tunnels.

The site, accessible by car, has an orientation table which helps locating the main sites on the panorama: the Mediterranean coastline, the Nice hinterland and the French Alps range of Mercantour. The view is particularly stunning in winter when the deep blue of the sea contrasts with the snow-capped mountains.

The seafront, view from Path of Nietzsche

The scenic pathway links the perched village down to the residential area of Èze-sur-Mer. It takes approximately one hour to go down the steep hill.

Rocks around Path of Nietzsche

How to get to Eze

Situated between Nice and Monaco, the village of Èze is easily accessible although traffic during the months of July and August and weekends is usually extremely busy. 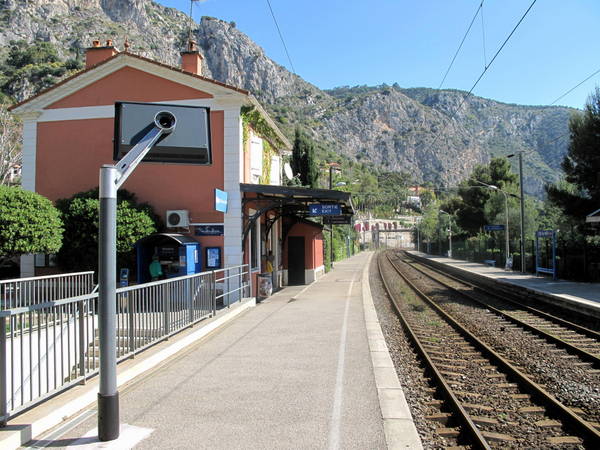 From Nice (11 kms) or Monaco (7 kms), the perched village of Èze is accessible by the Moyenne Corniche road (D6007). The nearest motorway exit on the A8 is number 57 (La Turbie).

There is a train station at Èze-Bord-de-Mer on the Nice-Menton TER line. A bus connects to the perched village.

Nice, France’s third airport after Paris CDG and Orly, is situated only 18 kms from Èze.