New posts
You are at:Home»Blog»Eurotunnel to celebrate its 20th anniversary today!

One of the Seven Wonders of the Modern World

Eurotunnel is a substantial technical achievement of the 1990s and arguably one of the 20th century most important construction projects. Dug 75 metres below sea level, it has a length of 50.5 kms (31 miles) and is formed of twin railway tunnels and a parallel service tunnel. The gigantic work needed the help of an Franco-British army of 13,000 engineers, technicians and workers, as well as 11 boring machines of 1,100 tonnes each used in the excavation. It took more than five years to complete.

A service of shuttle trains transports cars and trucks between Calais, France and Folkestone, England. One in two vehicles that crosses the Channel uses Eurotunnel.

Eurotunnel leases the used of its undersea link to Eurostar, the French high-speed train company. The high-speed railway service links Paris and Brussels to London. With trains departing London St. Pancras, Eurostar reaches Paris-Gare du Nord in 2hrs15min, running at up to 300 kph in Kent and Picardy. 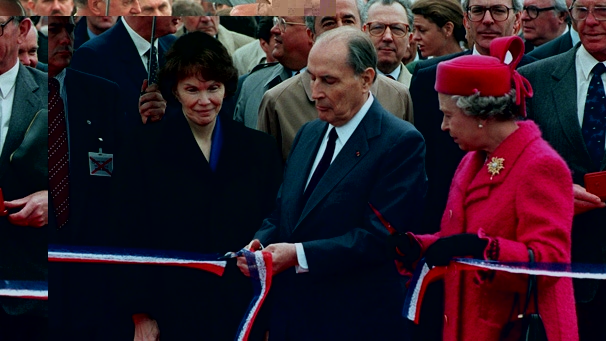 At the inauguration of the tunnel 20 years ago, the Queen described the event as a “French élan and British pragmatism” while President Mitterrand referred to the D-Day landings and took the opportunity to thank Britain for its role in liberating France from the German occupation.

Today 6th May 2014, a reception and an exhibition on the history of the tunnel will be held at Eurotunnel’s terminal in Calais.

Read more about the Channel Tunnel on our French blog:

(f) for féminin, (m) for masculin, (adj) for adjective and (v) for verbs
Liked it? Take a second to support French Moments on Patreon!