Epoisses is a full-cream cow’s milk cheese with a soft pâte and a washed rind.
The fat content is at least 50%.

Its origin dates back to the 16th century to a community of Cistercian monks based in Époisses. The trade secret perfected by the monks was then passed on to farmers of the small region, who have never ceased to improve the quality of their production.

Brillat-Savarin crowned it “King of cheeses” and from 1820, Époisses was the centre of a considerable trade.

Today, approximately 14 million litres of milk are collected for the production of Époisses from 56 qualified milk producers. The milk producers follow precise production rules which reinforce fodder self-sufficiency and the link to the terroir.

Époisses is made and matured in a limited geographical area, extending over a large part of the west of the Côte d’Or département, and on a few communes of the Yonne and the Haute-Marne. This geographic area has liassic or marlstone soils which correspond to the geological stages of the Jurassic period.

The production of Époisses

Époisses is a cheese with a slow coagulation process (16-24 hours) which drains spontaneously.

It is one of the last cheeses in France with lactic curd and a washed rind.

The very fragile curd is put in moulds to be drained for nearly 2 days.

Released from the mould, the cheese is salted with dry salt before drying. The affinage process follows for at least four weeks in cool damp cellars.

Twice a week, the cheese is washed by hand with water flavoured with Marc de Bourgogne.

Selection and tasting of Epoisses 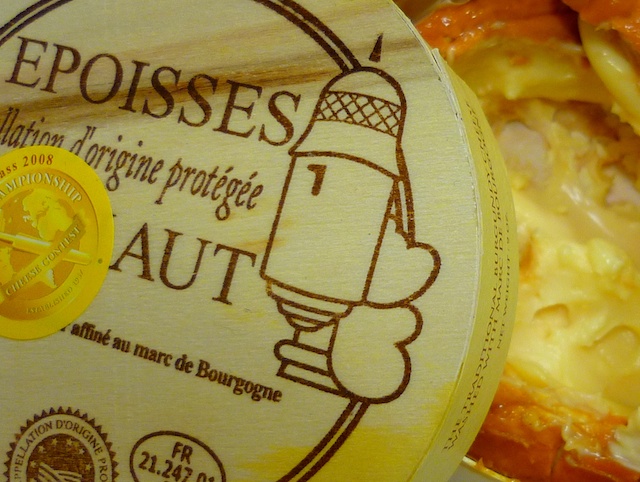 Its color, due to the natural pigmentation of its ferments, is orangey-red.

Its light beige pâte is soft and supple, and has a heart which is more or less slightly crumbly depending on the ripeness of the cheese.

Époisses is a cheese for the end of meals which goes well with a Burgundy wine, a white or red from the Côte de Beaune or the Côte de Nuits.