Paris has its Champs-Élysées, Nice its Promenade des Anglais, Marseille its Canebière and Aix its Cours Mirabeau. This wide street is one of the busiest and most frequented in Aix-en-Provence. The avenue connects Place de la Rotonde to the west and Place Forbin to the east. It was and remains the best part of town to enjoy a cup of coffee on the terraces while watching the world go by. 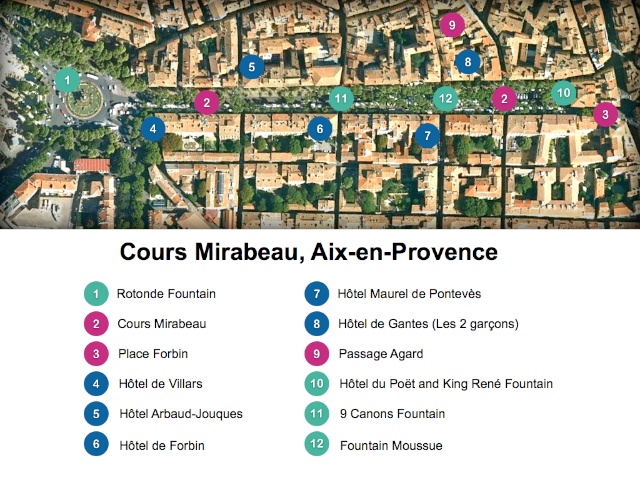 The wide avenue resembles a tunnel of plane trees punctuated with fountains and lined with cafés, terraces and elegant private mansions with iron-wrought balconies. Cours Mirabeau certainly contributes to the fame of Aix-en-Provence.

The street is 440 metres long and 42 metres wide and underwent an extensive rejuvenation in 2002 to make it more suited to pedestrians.

Cours Mirabeau: A Bit of History

In the mid-17th century, the archbishop of Aix, Michel Mazarin, had in mind to extend the boundaries of the city. Urban Jean Lombard designed the Mazarin district in 1649. The bourgeois, whose houses were located right up against the old rampart, asked that the area in front of their buildings be left undeveloped and become a promenade for onlookers and carriages. The authorities granted their request and the courtyard thus created became the gateway to the new town.

The dismantlement of the ramparts freed up a long space between the old town and the new Mazarin district which became known as “Le Cours”. It was not until 1876, however, that it was given the name “Cours Mirabeau“.

A showcase for the town of Aix

The requirements for the street were rigorous because not only did it have to serve as a passageway but foremost as a showcase for the town. In order to create a sense of elegance, the architects required all buildings to be the same height.

The wide street eventually changed its name to “Cours Mirabeau” in 1876 in honour of Honoré-Gabriel Riquetti de Mirabeau. This leader of the early stages of the French Revolution represented Aix at the Estates General assembly in 1789.

In 1696, four fountains punctuated the Cours:

Originally, elm trees lined the Cours Mirabeau. However, in 1895, all the trees were cut down and replaced with plane trees, most of which still border the street today.

From the mid-19th century, cafés, restaurants, banks agencies and clubs opened on the ground floors of the Cours’ private mansions. In the 20th century, a wider array of stores opened such as clothing shops, cinemas, confectionaries, and bookshops… some of them negatively affected the original architectural appeal of the Cours.

Some of the prestigious private mansions (“Hôtels Particuliers” in French) built along Cours Mirabeau contribute to the renown of the street and of Aix-en-Provence. Let’s have a closer look at seven of the most interesting hôtels particuliers that border Cours Mirabeau.

Louis d’Esmivy de Moissac, advisor to the Court of Auditors was the first owner of Hôtel de Villars (1710).

In 1750, Moissac’s grandson sold the mansion to the Duke of Villars, then Governor of Provence. In 1757, the duke commissioned Georges Vallon the addition of four pillars in front of the entrance, thereby infringing upon the public pavement. Only two other buildings share a similar audacious sign of power: the City Hall and the University in the old town.

Inside the mansion is a fine wrought-iron staircase featuring the Villars’ coat of arms.

The Hôtel Arbaud-Jouques dates back to 1732. Architect Jean-Baptiste Franque built the mansion for Elzéar d’Arbaud, Lord of Jouques and advisor to the Parliament.

On the façade, the fine wrought-iron balconies feature the “AJ” monogram at their centres.

The door is decorated with war symbols and the owner’s initials. Charles IV of Spain resided in the mansion in 1812.

Architect Pierre Pavillon built the Hôtel de Forbin in 1656 for César de Milan, advisor to the Parliament. In 1672, it came into possession of the Forbin family by marriage.

It was one of the largest mansions built on Cours Mirabeau with a façade of eight windows long. The symmetric antique style is decorated with a fine wrought-iron balcony.

Many personalities stayed in the mansion: the Dukes of Burgundy and Berry in 1701, Pauline Borghèse, sister of Napoleon in 1807 and Fouché in 1810.

The Hôtel Maurel de Pontevès (or Hôtel d’Espagnet) is the oldest private mansion on the Cours Mirabeau. It dates back to 1648 before the street was even laid out.

Its first owner was Pierre Maurel, a rich cloth merchant from Aix. The mansion displays an amazing portal with two Atlantes by Jacques Fossé. The impressive and muscular figures flank the door and support the first-floor balcony. Today it houses the Tribunal de Commerce of Aix-en-Provence (the court dealing with trade disputes).

At the present time, the Hôtel de Gantes houses the popular café “Les deux garçons”. This is the oldest café in Aix.

The façade of the mansion dates back to 1660 and is punctuated by Corinthian pilasters framing the windows.

From the end of the 18th century, it was the meeting place of the town’s older aristocrats. The café has retained some very beautiful Empire Style rooms dating from the beginning of the 19th century.

Local casually nickname it “Les Deux G” from the names of its two founders (Guérini and Guidoni). Famous French artists and intellectuals frequented the café such as Paul Cézanne, Jean Cocteau, Raimu and Jean-Paul Sartre.

On 30 November 2019, a fire destroyed the café and damaged the structure of the building.

Don’t miss the picturesque Passage Agard. Félicien Agard built it in 1846 as a narrow passageway between Cours Mirabeau and Place de Verdun. Today, it features boutique shops. Petite Rue des Carmes crossed it in the middle.

The Hôtel du Poët stands behind the statue of King René, completing the perspective of Cours Mirabeau to the East.

Architect Georges Vallon designed the mansion for Henri Gautier around 1725 on the site of a former water mill. Gautier was a wealthy man ennobled by King Louis XV in 1724. In addition, Henri Gautier had the responsibility of the treasury of the states of Provence.

Inside the mansion is a beautiful columned staircase with a Louis XVI-style ramp featuring the Poëts’ coat of arms.

The Fountains of Cours Mirabeau

The biggest and most famous fountain in Aix-en-Provence is La Rotonde. It represents a picture postcard and a symbol of the town of Aix.

The round-shaped square opened in 1777 to give better access to the routes to Avignon and Marseille. Moreover, it confers upon Cours Mirabeau a “noble entry” in Aix.

The current fountain at the centre of the square dates to 1860. It has a total diameter of 41 metres and a height of 12 metres. Four groups of two lions each surround the Rotonde’s circular pond.

Each of the three marble statues at the top faces a strategic direction:

The fountain marks the intersection of Rue Joseph Cabassol and Cours Mirabeau. Dating back to 1691, the Fontaine des Neufs Canons replaced a former fountain known as St Lazare. Originally its basin comprised four lobes but two were later removed to allow for traffic.

In the 19th century and the beginning of the 20th century, the fountain served as a trough for the flocks of sheep from Arles on their way to the mountains (transhumance). This explains why the edges of the basin are so low!

Vegetation has grown so much on it that it has hidden the sculptural details of the fountain.

This surprising fountain marks the intersection of Rue du 4 Septembre and Cours Mirabeau. It is this hot water fountain (fontaine d’eau chaude) from 1668. Actually, it is the only fountain in Aix still fed into by the thermal springs of the Bagniers.

Its water springs out at 18 degrees Celsius (64º F). It comprises two basins placed on top of each other which moss has completely taken over, hence its name!

At the eastern extremity of Cours Mirabeau is the fountain and statue of King René. The fountain stands on the site of a former pyramid-shaped fountain which was destroyed during the French Revolution.

The town of Aix wanted to honour the memory of King René I of Naples (René of Anjou). This beloved king, who imported the muscat grape to Provence, died in Aix on 10 July 1480.

The mayor and the sous-préfet commissioned the statue to sculptor David d’Angers in 1822. The 6.6-tonne statue represents King René standing on top of a fountain, holding a sceptre in his right hand and a wreath of muscat wine grapes in his left hand. At his feet are a few objects such as books and paint palettes. They evoke the king’s fondness for the arts.

The pedestal of the statue contains a lead box containing coins and medals representing the members of the royal family. In addition, there is a copy of the “Explication des cérémonies de la Fête-Dieu d’Aix-en-Provence” (an explanation of Aix-en-Provence’s Feast of Corpus Christi) by Gaspard Grégoire (1777). The general public believed that King René introduced this popular local celebration.

Things to do in Aix-en-Provence

Looking for activities and things to do in Aix-en-Provence old town and its surroundings? Check out the offers from our partner Get Your Guide:

All our pages about Aix-en-Provence on the blog:

The best sites to see around Saint-Rémy-de-Provence