New posts
You are at:Home»Cathedrals & Churches»Discover the church of Saint-Germain-en-Laye

The Church of Saint-Germain-en-Laye 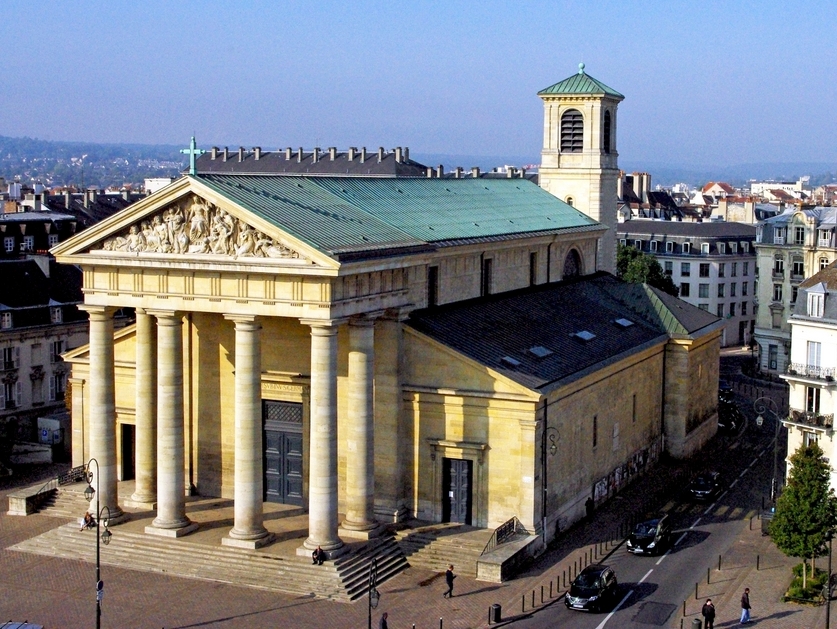 The neo-classical style of the sanctuary is emphasised by a monumental façade consisting of a triangular pediment supported by six Tuscan columns. The sculptures of the pediment by Ramey represent Religion surrounded by the four evangelists and the three theological Virtues (Faith, Hope and Love).

Pediment of the church © French Moments

Above the great portal is an inscription in Latin: ‘D.O.M. sub. inv. S. Germani’ (To the good and great God, under the invocation of St. Germain). St. Germain or Germain of Paris (c. 496-576) was a bishop of Paris born near Autun, Burgundy to noble Gallo-Roman parents. He is not to be confused with Germanus of Auxerre (Saint-Germain d’Auxerre). The interior of the Church

The interior of the church has three naves topped by a coffered ceiling referring to the Basilica di Santa Maria Maggiore in Rome. The ceiling is supported by twenty-nine ionic columns and four larger pillars more and less rectangular. Suspended above the entrance is the great organ by Cliquot, dating back to the 18th century.

The great nave is decorated with frescoes painted by Eugène Amaury-Duval in 1849.

Detail of a fresco, church of Saint-Germain-en-Laye © French Moments

The richly ornate pulpit was donated by Louis XIV to the parish church in 1681.

The side-aisles are bordered by seven chapels and a baptistery.

In the choir, the great central fresco depicts Christ in his glory surrounded by angels and saints. The small organ behind the main altar was created by the famous organ builder Cavaillé-Coll.

The main altar and choir of the church © French Moments

The chapel of King James II Stuart (1633-1701) houses the mausoleum of the exiled English king who was welcomed by Louis XIV.

Following her visit to Saint-Germain-en-Laye in 1855, Queen Victoria paid for the creation of the shrine. A commemorative plaque in both French and English recalls:

‘In this church is the shrine to the memory of James II the last Stuart King of England who died in exile at the castle of Saint-Germain-en-Laye on September 16th 1701. The monument was erected by Her Majesty Queen Victoria’.

The wall of the chapel of James II Stuart © French Moments