Christmas presents are traditionally given to children (and also to grown-ups!) at Christmas. Wrapped in a shiny gift paper with a beautiful ribbon, it is given out by Father Christmas. However, the tradition of the Christmas gift hides a very surprising story… let’s have a closer look at its origins and traditions with a French twist!

What was the first Christmas present?

Christian tradition attributes the distribution of the first Christmas gifts to the Three Wise Men.

The visit of the Magi is told in Matthew’s Gospel in chapter 2:

1 After Jesus was born in Bethlehem in Judea, during the time of King Herod, Magi from the east came to Jerusalem 2 and asked, “Where is the one who has been born king of the Jews? We saw his star when it rose and have come to worship him.”

9 After they had heard the king, they went on their way, and the star they had seen when it rose went ahead of them until it stopped over the place where the child was. 10 When they saw the star, they were overjoyed. 11 On coming to the house, they saw the child with his mother Mary, and they bowed down and worshipped him. Then they opened their treasures and presented him with gifts of gold, frankincense and myrrh.

So the very first present was…

But far beyond the visit of the Magi, Christians consider Jesus to be the gift of God. The Epistle to the Romans, chapter 6 verse 23 states:

“For the wages of sin is death, but the free gift of God is eternal life in Christ Jesus our Lord.”

His birth in a humble manger ushers in a new era, thanks to the sacrifice he will make 33 years later on the cross.

There is a huge gap between the story of a deprived birth and today’s commercial Christmas frenzy. And this gap has been widening since the middle of the 19th century.

What are the Christmas gift bringers?

To give gifts to their children, parents have come up with legendary gift-givers. In France, these can be divided into three main groups:

Some of these imaginary beings share several similarities: old age, generosity, and the magical ability to travel through the air. They are accompanied by carrier animals (donkeys, reindeer) and sometimes by a malevolent double (Père Fouettard, Hans Trapp).

In the past, children in France used to put an empty shoe (un soulier de Noël) by the fireplace. This tradition seems to be dying out nowadays for one simple reason: the size and number of gifts have increased steadily and cannot be put in a small shoe. And anyway, not all homes have a fireplace anymore!

In the past, Father Christmas would drop off a present, usually food (an orange, biscuits, gingerbread).

As nowadays, it has become impossible for Father Christmas to put the presents in one shoe, he much prefers to place them where there is more room: at the foot of the tree!

The Etrennes of New Year

The first Christmas presents were mainly food gifts: dried fruit, nuts, gingerbread, cakes, and biscuits. They are attested in the Middle Ages, especially in Strasbourg.

However, long before the advent of modern Christmas presents, there were also Christmas gifts. Their use dates back to the Middle Ages and was still widespread in the mid-19th century.

The word “étrennes” originates from the Latin strenae. It was a festival that took place in the January calendar, i.e. the first days of the month. The festival honoured Strenia, the Roman goddess of health.

It was traditional for aristocratic and bourgeois families to give presents to servants and lower classes.

From Etrennes to Christmas presents

From the middle of the 19th century onwards, the use of étrennes coexisted with the growing influence of Christmas presents. Towards the end of the 19th century, the latter became the norm, erasing the tradition of New Year’s étrennes.

According to Martyne Perrot, “This transition from étrennes to Christmas presents was based on another concomitant social phenomenon. That of the rise of the bourgeoisie which, triumphant in this century, made Christmas one of the great annual family gatherings, gradually disguising the religious festival as a secular celebration.”

From then on, one of the major landmarks of the calendar changed: the New Year’s étrennes gave way to the Christmas gift on 25 December.

Nowadays, étrennes are limited to the coin given to postmen, firemen and caretakers in exchange for a New Year’s calendar.

In contrast to étrennes, Christmas presents are exchanged in the private and intimate setting of families. They place the focus on the child, the centre of attention of the Christmas party.

The role of Christmas shop windows

According to Martyne Perrot, it was the Christmas shop windows that were the most important factor in the emergence of Christmas presents in French society.

In 1893, the Parisian department store Le Bon Marché attracted passers-by with a skating scene in the Bois de Boulogne.

Seven years later, in 1900, the Magasin du Louvre created a surprise by announcing that it was home to the largest Christmas tree in Paris.

Then, in 1910, Le Bon Marché presented the first animated window display with automatons depicting Robert Peary’s expedition, which had reached the North Pole for the first time the previous year.

The emergence of the Christmas gift pack

According to French writer George Sand (1804-1876), in the 19th century, gifts were wrapped in white or craft paper and held together with ribbons.

It was the introduction of gift wrap that marked the tradition. The paper used is historically printed, cellophane with bright, colourful ribbons. At that time, the gift wrap was prepared by the mothers and daughters of the family. 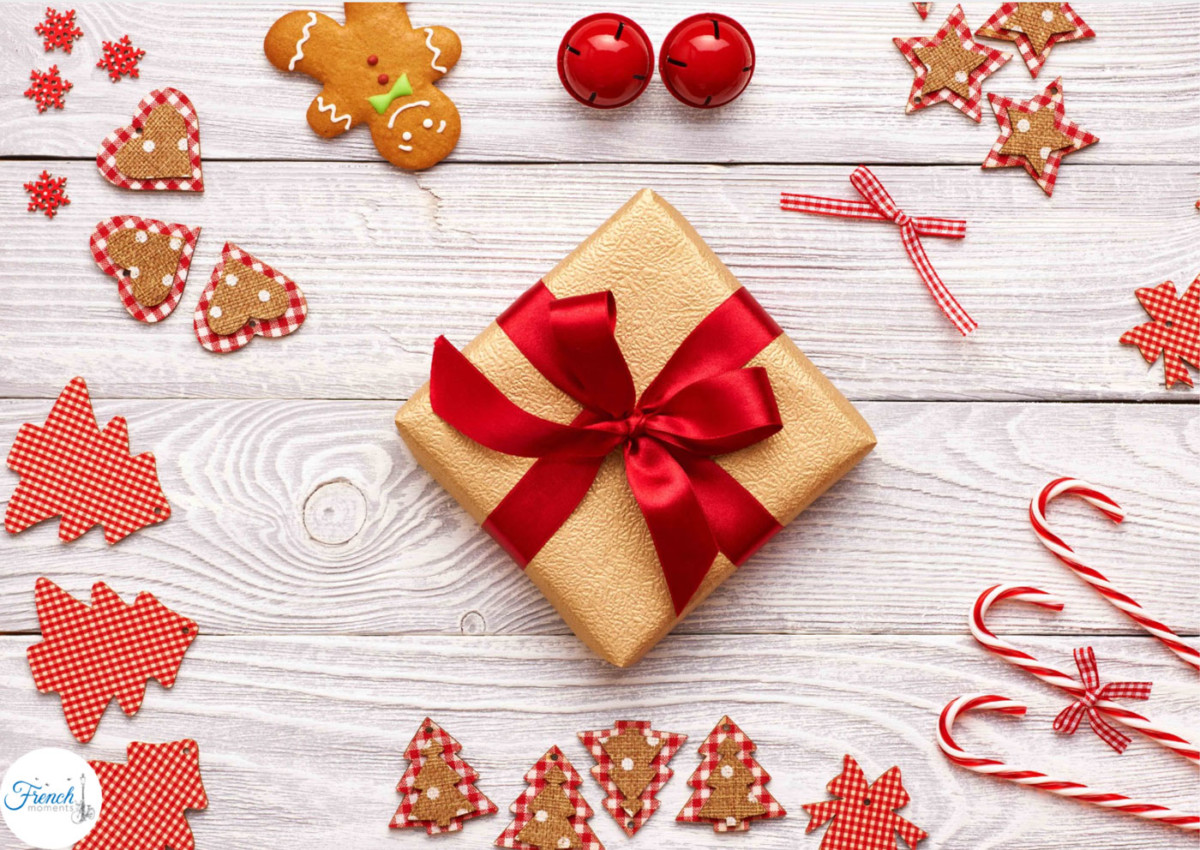 The rise of Christmas presents in the 1950s

In the aftermath of the Second World War, the tradition of Christmas presents became popular in all French families, starting in Paris. The commercial promotion of Christmas – and therefore of presents – took off in the 1950s.

This was largely due to the advent of Father Christmas in French Christmas traditions. In the 1950s, the Christmas present-giver was responsible for visiting all children, good and bad, to give them the toys they so desired.

Martyne Perrot puts her finger on the evolution of post-war French society when she writes:

“Everything is in place to seduce the young public, to fill them with wonder, to entertain them and, from the end of November, to present them with the toys they will crave. Christmas thus prepares the future baby-boom generation to face the consumer society. And Christmas presents are one of the best ways of doing this.”

According to Elle magazine, Christmas 1952 was the first time in France that people spoke of the “marée shopping de Noël” (Christmas shopping tide). A year later, on 24 December 1953, Le Parisien Libéré described, in its columns, the new frenzy of gift buying in  the run-up to Christmas:

“An army of turkeys has invaded Les Halles. The confectioners offer passers-by the spectacle of windows, each more seductive than the last. The latecomers get the traditional Christmas tree that will amaze the children. In the shops, it is the rush. Outside, the traffic is intense and pedestrians stroll around, loaded with packages… “

Christmas has become the time to exchange gifts with your family.

The French national statistics institute (INSEE) estimates that people spend 2.5% of their annual income on Christmas presents. This represents two-thirds of their presents budget. Contrary to all expectations, it is no longer toys that top the list.

Books, board games, leisure goods and … cash and gift vouchers are more likely to be found under the tree!

Even in low-income or insecure families, not giving a present remains exceptional (8% of working-class families, 5% of households with an unemployed spouse).

Father Christmas distributes more than 60 million toys in France, i.e., a little more than 8 gifts per child. And for this, he is increasingly inclined to order them on the Internet (33% of gifts are bought online). However, almost one French person in two chooses the hypermarket to buy their gifts. (The European average is 25%).

In 2020, an unprecedented development was observed, directly related to the health situation in Covid-19.

According to a survey conducted by a toy company, toy sales in France rose by 20% in September and 12% in October compared to 2019. This double-digit increase was unprecedented.

Christmas presents spending by the French

In 2015, the French spent an average of €254 on their Christmas presents. Few families wait until the last minute to buy them:

Christmas has become the annual rendezvous of consumer society. This leads some to say that “Christmas is becoming purely commercial and less and less religious”.

In these times of crisis, however, it can be seen that the French are more than ever giving priority to the family unit and limiting the budget they used to spend on outings.

This is the time when we “let loose” to please ourselves and others.

A festive moment is shared with the family, whether you want to commemorate the birth of Jesus or renew social ties.

Find out more about the Christmas season in France

Affiliate links in this article allow me to earn commission on sales. They are at no extra cost to my readers and help me maintain this blog!

Christmas Toys: the History of a Tradition

The Christmas pyramid: Origins and Traditions